Another NFL season is about to kick off, and, as we say, all my red-wine friends are here! Or we do now, anyway, if we're fans of the New York Giants, Los Angeles Rams or Chicago Bears, because the three teams just announced a surprising new addition to their rosters: canned Cabernet Sauvignon. Woodbridge, the Robert Mondavi brand, has become the partner pour of the three teams, and the wine's new ad campaign will be coming to airwaves on ESPN and NFL Network.

"Woodbridge wine drinkers have expressed a love for football and, looking deeper into their interests, we saw a strong overlap with football fandom," Jaymie Schoenberg, vice president of marketing for Woodbridge, told Unfiltered via email, noting that football fans increasingly are turning to wine in general. "We also see a lot of synergies between football and wine drinking occasions—whether at the stadium, at a bar or at home."

Though wine has become more visible in football of late—from Yellow Tail's breakthrough Super Bowl ads to respected labels from gridiron stars like Drew Bledsoe and Charles Woodson—the new partnership may be the biggest blitz yet. First there's the wine, packaged like a linebacker (a 375ml linebacker, but still): Limited-release cans of Woodbridge California Cabernet 2017 wearing football-themed uniforms will be available for the teams' fans in New York, New Jersey, Illinois and Southern California.

The three teams "all have a strong history and recent track record of on-field success and have large, passionate fanbases," said Schoenberg. "By matching these insights up with Woodbridge's highest consumption markets, we were able to identity these three key teams as our target partners." But for the lonely Giants fan(s) in, say, Boston, there will also be a 500ml Woodbridge "grab-and-go" container rolled out nationally next month.

Then there's the coverage: Woodbridge will be running its new "From One for All" ads nationally on ESPN and NFL Network. It's part of a larger NFL embrace of wine: Until two years ago, beverages stronger than beer were prohibited from showing ads during games. There will also be digital ads, sweepstakes and merch at the three stadiums, and even the classic double-decker-bus-side spots. And, of course, a product that sells itself: As Schoenberg noted, fall is Cabernet season, too.—B.O.

Phil Mickelson failed to qualify for the final round of last weekend's Tour Championship, but he didn't seem too salty about missing out on the celebratory Meiomi (Official Wine of Golf). While his rivals hashed it on the green, the three-time Masters champion was busy suntanning with a bottle of his poolside wine of choice. Not your standard rosé had he, nor even a pour from fellow players/current winemakers Cristie Kerr or Ernie Els. 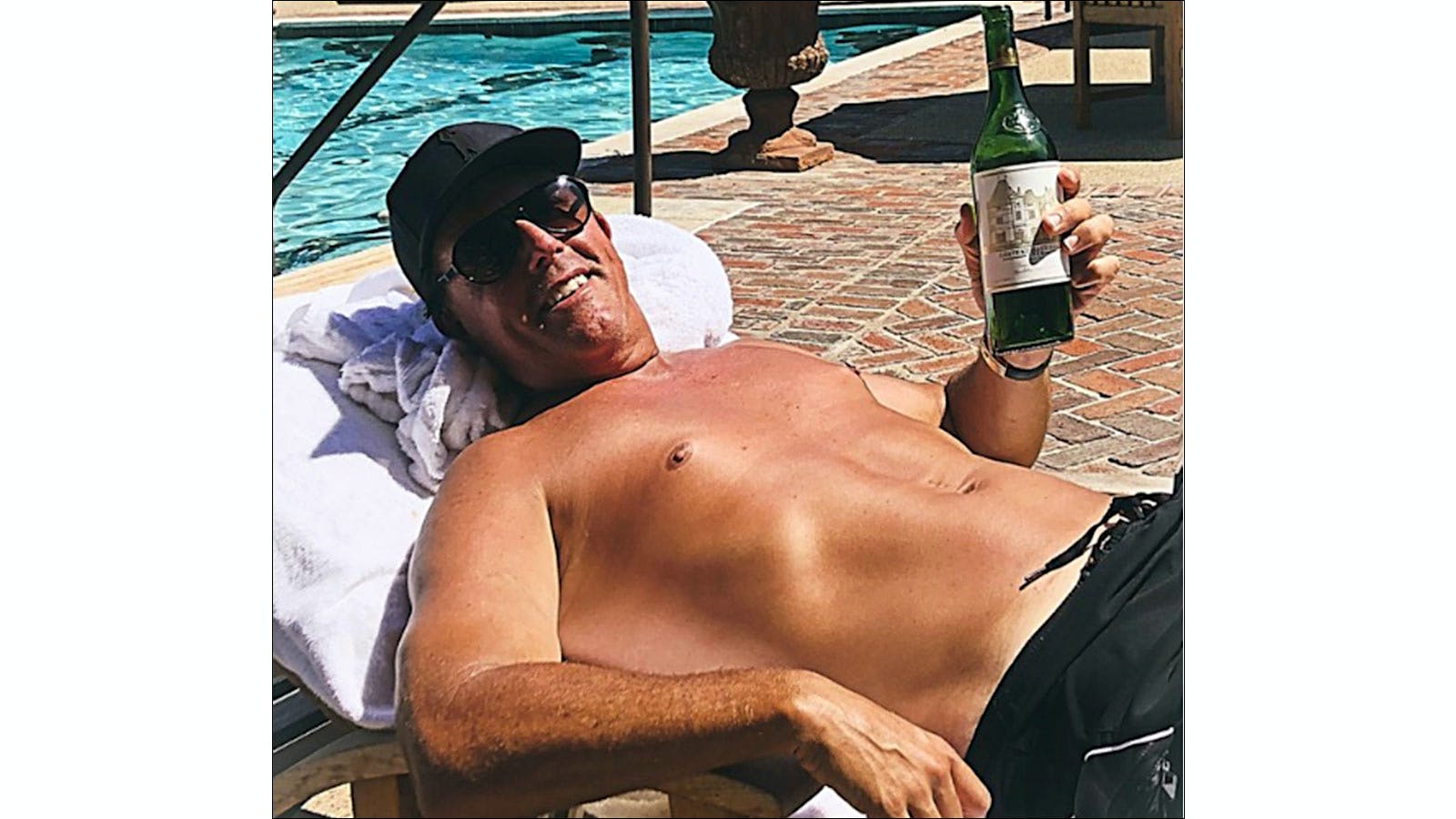 Nope, Mickelson, shirtless and grinning, was teeing up a bottle of 1985 Château Haut-Brion, writing on Twitter, "I would love to be competing at East Lake right now, but sipping 1985 Haut-Brion poolside while working on my tan and spending time on social media isn't a bad way to spend the week either." Of course, Lefty has been known to sip the world's most-prized pours in unorthodox venues. Back in 2013, he used the Claret Jug, which he'd recently captured for winning the Open Championship, as stemware for a $40,000 1990 Romanée-Conti. Rory Mcllroy may have had the better weekend at this championship, but we'd agree with Mickelson that when it comes to la dolce vita, sand traps are best left out of sight and out of mind.—S.Z.