There's a major centennial celebration coming up next week, and some of the top women artists in the country are doing it big: For the Aug. 18 occasion of the anniversary of women's suffrage, eight artists and their teams are working 'round the clock to finish massive murals in locations around Tennessee, the key state whose ratification of the 19th Amendment in 1920 made suffrage a reality. To jubilee properly, they're pouring both paint and wine, with Cycles Gladiator among the proud sponsors of the project, called Walls for Women.

Throughout July and August, the artists descended on blank walls in Nashville, Knoxville and a host of other towns to bring their scenes to life on a bank, a bike shop, Nelson's Green Brier Distillery and other unexpected canvases, in an initiative conceived by public-art advocacy group DMA-Events ("Do. More. Art."). 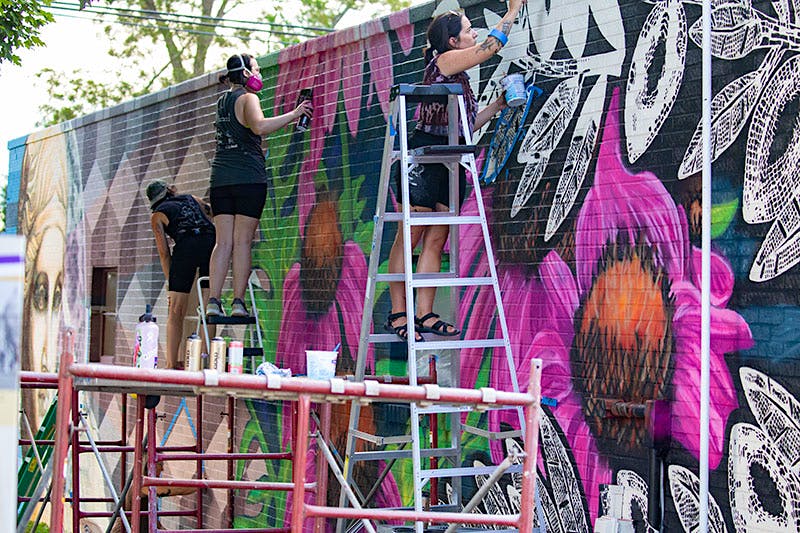 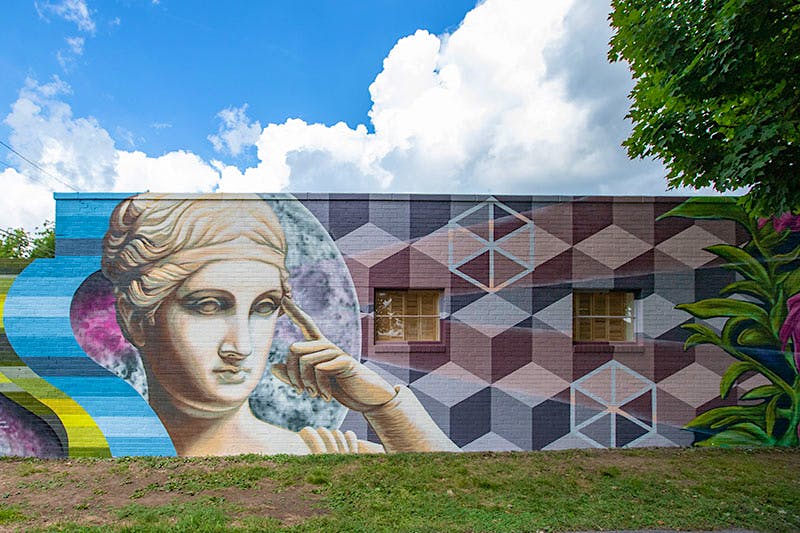 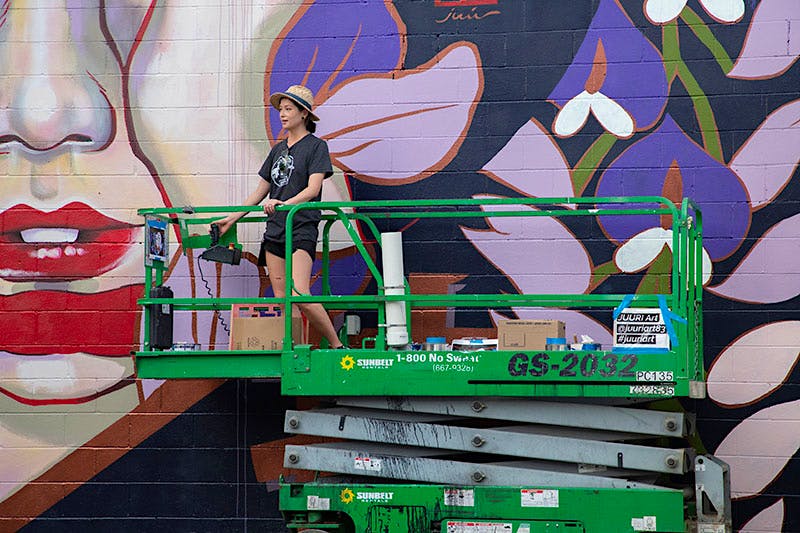 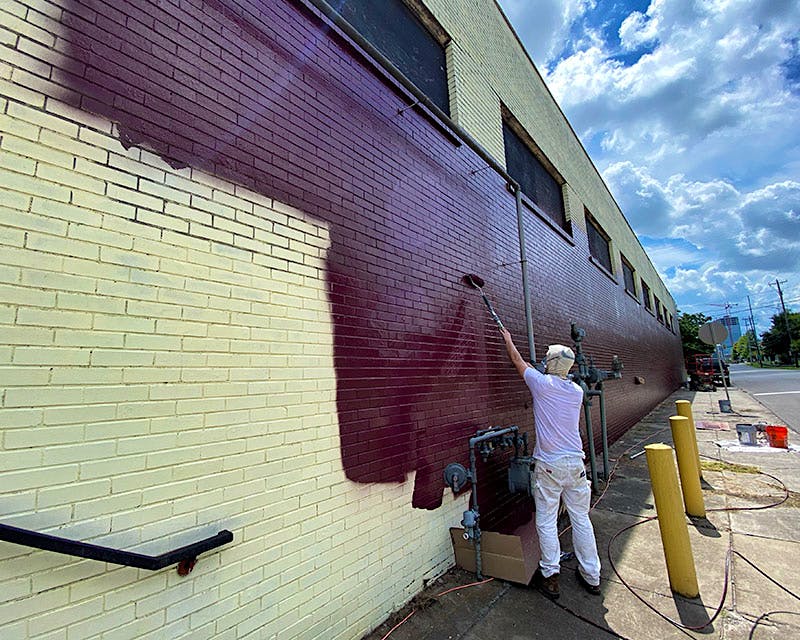 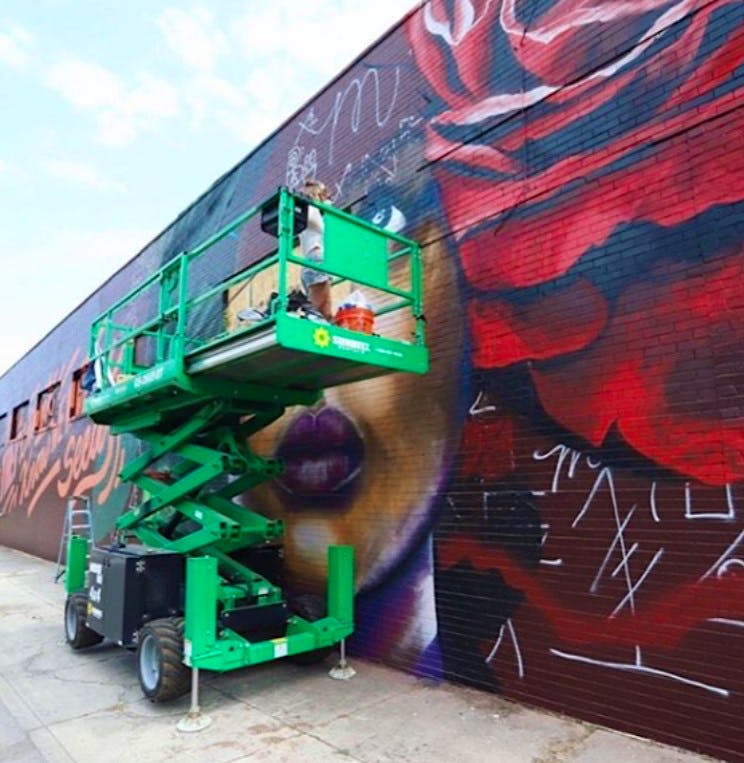 "Even as a Tennessee native, I didn't fully grasp how important my state's role was in the suffrage movement," explained Kristin Luna, co-founder and president of DMA, to Unfiltered via email. "Women are told every day of their lives how to act, behave, speak and dress, so the point of Walls for Women is to take back that control and leave it in the hands of the women, the artists creating these masterpieces. None of them were given parameters, and their art wasn't dictated or edited by anyone—it's a true expression of what's in their minds and hearts translated to a large canvas, in this case a wall."

Artist Jenny Ustick recently finished her mural in McMinnville, Tenn. The complex design she sketched out and executed features symbols of contributions from influential Tennessean women to fields and causes as diverse as sculptural art, horticulture and, of course, equality. “I want the wide-ranging stylistic choices in the mural to represent diversity of thought, and celebrate many voices and ideas coming together to create something beautiful," Ustick told us.

For Cycles Gladiator to get involved as a sponsor was a no-brainer, with its famous (and occasionally controversial) art nouveau label of a nude woman biking. Anna Frizzell, marketing director of Wine Hooligans, the company that makes Cycles, was "inspired to make meaningful connections with organizations supporting women’s empowerment" after learning about the brand's label and history. In-person tasting events for WFW unveilings are on hold, but the company is looking into virtual tastings and other ways to toast the anniversary. "We like to say this is a once in a 100-year opportunity—you can only imagine how excited we are to be a part of it."

The start and completion of the murals was pegged to a staggered schedule, but it has encountered challenges and welcome surprises. Dicey weather in the eastern part of the state threatened progress on some work, but artist Paris Woodhull brought her mural across the finish line in Knoxville yesterday. Another town, Centerville, may be added to the list of mural recipients next month. But right now, eyes are on Cymone Wilder and Sarah Painter, who are busy at work using the "squiggle-grid technique" to decorate the enormous wall of the Nashville distillery, Nelson's, also a beverage sponsor of the event; it's the ambitious centerpiece of the whole series. 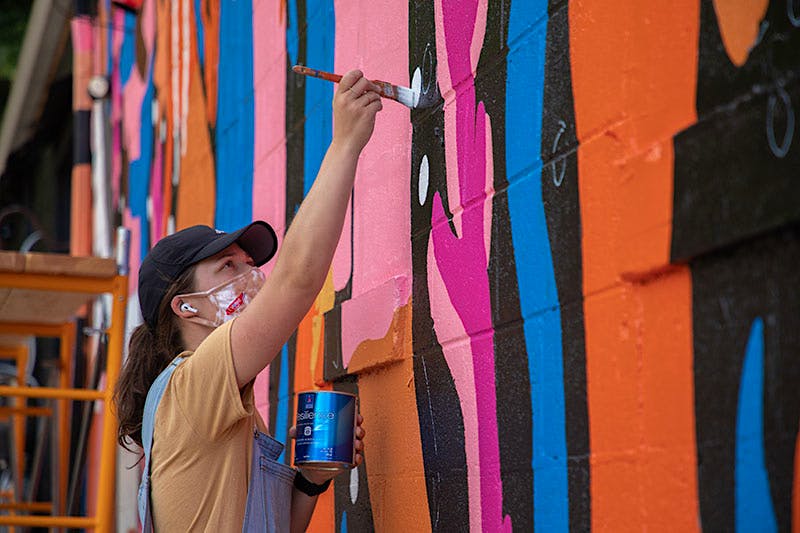 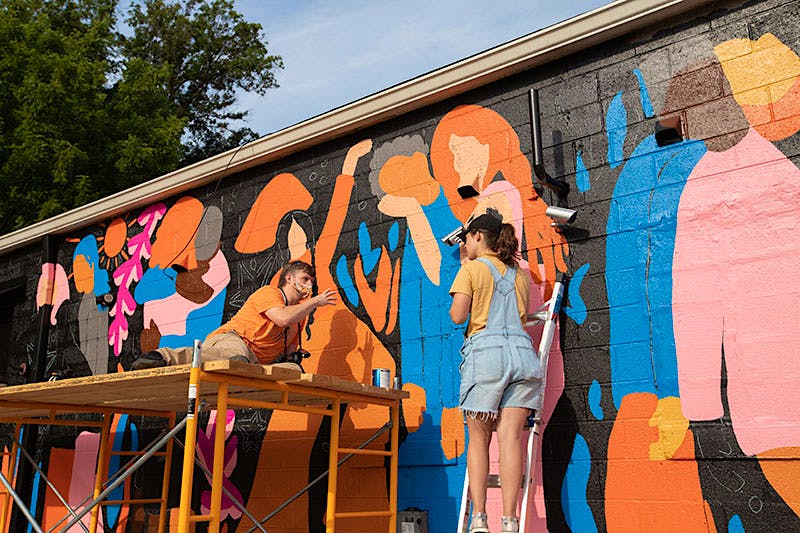 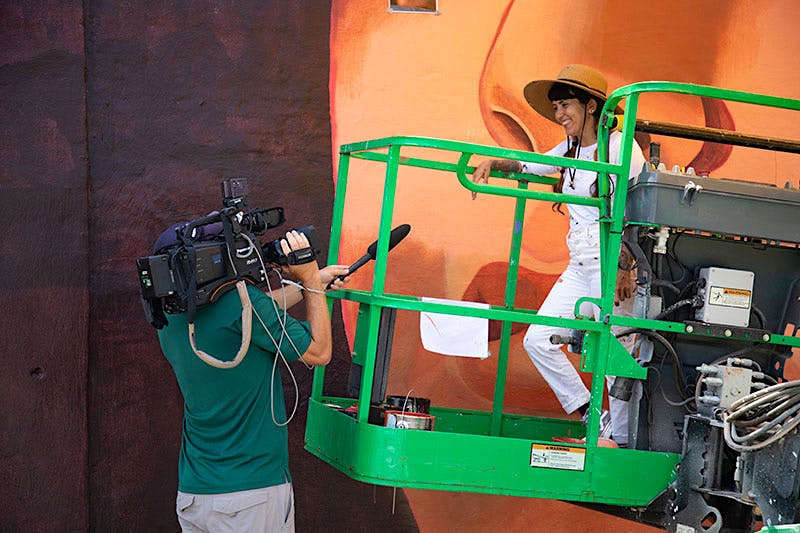 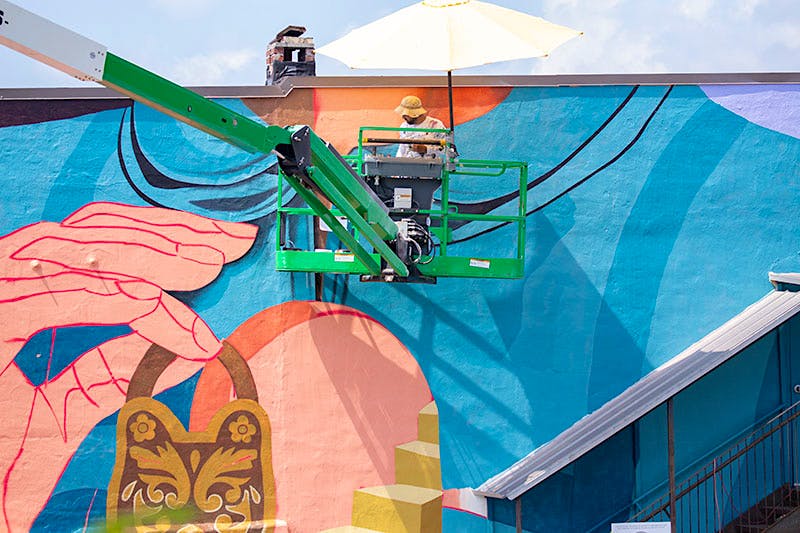 Unfiltered caught up with Wilder, who cites the Black experience, as well as women's, as an inspiration and influence. “I think oftentimes, when we talk about empowering disadvantaged groups, we use language that implies that they’re not great unless we help them become great. But a lot of times these disadvantaged people have been great and really it’s the rest of the world that has to adjust their vision to see and elevate that greatness. Together, Sarah and I have created a mural that highlights the generational and continued fight that women’s suffrage started. Because the work's not done until we all have a voice.”

All involved emphasized that the WFW and what it represents are a work in progress, in more ways than one. Once the paint is dry, there will be educational components and voter-turnout initiatives. "I would love," said Wilder, "for this wall to feel empowering to those continuing the fight for the social issues that are close to their hearts."—J.L.

Earlier this month, Napa winemaker Dan Petroski launched the inaugural "Blue Issue" of Massican Magazine, an Instagram-only publication in collaboration with Phaidon Press, the global art-book publisher. If you want to stay up to date with the latest happenings in wine, you should continue to follow WineSpectator.com and @wine_spectator on Instagram. If you’re interested in art, food, photography, film, fashion and travel, you might (also) add @massicanwinery to your reading list.

“The magazine has nothing to do with wine, but everything to do with what inspires me in this world,” Petroski explained to Unfiltered. “This is about a well-spent life and a desire for those things.”

Petroski is the winemaker at Cabernet favorite Larkmead, and the man behind Massican, a brand of coveted California takes on Tocai Friulano, Ribolla Gialla and other Italian varieties. Before wine, Petroski spent a decade in New York working in marketing and sales for magazines such as Time and Sports Illustrated. Before that, as a child, he loved escaping into the pages of magazines.

Issue No. 1 explores the color blue, the very same that decorates the Massican wine labels. This particular hue is a derivative of "Pompeiian blue" found on Roman frescoes around the Monte Massico region of southern Italy from which Petroski's family hails. There's an essay-length meditation on blue by Phaidon editor Rebecca Morrill, plus blue-tinged pensées and photos from the realms of fashion, nature and architecture.

Petroski told us about his inspiration for the concept: A few years ago he started thinking about the history of the printed word and how we, as a culture, consume it. “The carousel of Instagram was already built in a way that you use a finger or thumb to ‘flip a page,’” he said, calling it a version of a literary journal. Each chapter will be serialized on the Massican account's Instagram Stories, and then after two weeks, the entire magazine will be archived for future reading. A new issue will appear every two months.

So far, the only hiccup has been the learning curve for some (new?) Instagram users. "I did get a lot of emails saying, ‘I don’t know what to do here; the words are moving too fast,’” Petroski chuckled. (N.B.: You can press and hold each slide on an IG Story to pause it.) But, he noted, "I owe my current career in wine to my aspirational reading of magazines." We'd not deny that this guy might be onto something, pairing wine and the written word.—A.R.