"John, all the vintners are 49ers fans." When Margaret Duckhorn, cofounder of Napa's Duckhorn Vineyards, told Dr. John York that, it inspired a then-unusual pairing of wine and football. Now, the co-owner of the team has grown Appellation 49 to become perhaps the most comprehensive in-stadium wine program, with six California vintners pouring at every Niners game in the suites—48 wines over the course of a season. For the first time this season, wine is available throughout the stadium at all tiers of seating. Incidentally, the team is leading the NFC West right now with a 9-1 record.

Since joining his wife, Denise DeBartolo York, in running the team in 1999, York has made an effort to integrate the local wine scene—which ranges from Napa to the Santa Lucia Highlands—into the gameday experience. "It's only California wines; we are a California team, so this is Californian wine," he says. With the opening of the 49ers' new home, Levi's Stadium, in 2014, the wine program received a commensurate boost as well.

Wine Spectator editorial assistant Peter Lane spoke with York about the fine bottles that have most surprised him, how Duckhorn helped kick off the Niners' wine program and what's next for the team's vinous aspirations. 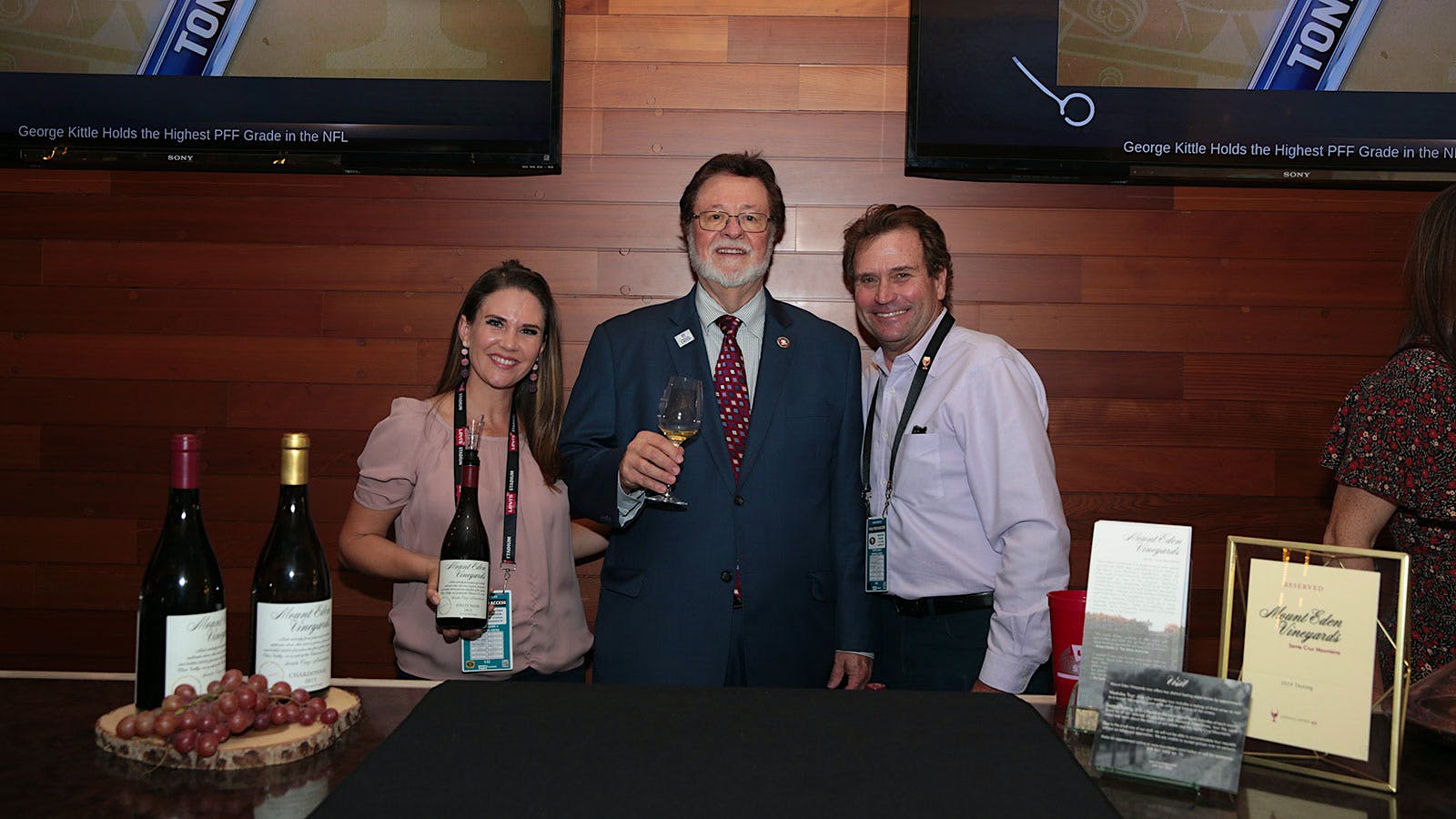 Wine Spectator: What got you into wine?

John York: Well, my parents never drank wine, but Denise's parents did have wine all the time. So, probably sometime late in our college careers. And then when I was in medical school, all of our friends would usually drink beer. We would go out to dinner, and didn't know anything about wine, but we would order it. And when you don't know much about wine, sometimes it's good, and sometimes it's not good.

And when I came out to California—the team has been in Denise's family since 1978—I just kind of bumped along and found wines that I liked. When she and I started running the 49ers, back in '99, I started going up to Napa more often and got to know many of the vintners, and that's really how I started. Like so many other people, I started in Napa, and really enjoyed the Cabernets.

I invited Margaret Duckhorn [co-founder of Duckhorn Vineyards] down to a game. I had invited other vintners down to a game, and they would bring me a bottle or two bottles, which is always appreciated and always nice. But here comes Margaret, and she calls ... and wanted to know how many were in the suite—which numbered about 35 people. So she brought wine for the suite, and everybody enjoyed the wine. And she just said, "John, all the vintners are 49ers fans. You should start having somebody down at every game, and start to have them pour wine in your suite." And so that's what I did, and obviously you get to know a lot about the various varieties, and the various differences in wines.

WS: As the program has expanded, how has your own wine experience evolved? What are you drinking now?

JY: People have heard me say, probably seven years ago, "My favorite white wine is Pinot Noir," because that was as light as I wanted to go. [But] I was introduced to [some] different things: I had, very close together, a 1999 Mi Sueño Chardonnay and a 1990s Ridge Chardonnay, and then I had an old Stony Hill Chardonnay—and all of a sudden, when you start drinking those old Chardonnays, the Chardonnays don't all taste the same. They are beautiful and wonderful. And so I've developed a love for white wines as well.

With more time, I've started to travel, and my twin daughters, Jenna and Mara, love wine. We've been over to Champagne, love the wines. Southern Rhônes are some of my favorites. Those Southern Rhônes, of course, are similar to the Tablas Creek, and the Haases [who co-own Tablas Creek] actually set up a visit for me at Beaucastel, and we were at Beaucastel for probably four hours. And we ended with a 1980 Beaucastel red, and those were just fantastic. And my daughters have been down to Argentina—I love the Argentine Malbecs, I love the Chilean Cabs, and I have two restaurant friends who do Spanish wine, so I've learned a little bit about Spanish reds. And I also like the Italian whites. So there's a lot of wine.

The people that you meet in the wine industry—I realize that it's a hospitality industry, but the people are so sincere. They're passionate about their wines, and they are really passionate about people who like it.

WS: Wine is all about connections—isn't that a big aspect of Appellation 49?

JY: Right, of course. Initially, at Candlestick [the previous 49ers stadium], I was doing a vintner at every game, every home game, since about 2002 or '03, all the way up through about 2013. And as we were developing Levi's Stadium, I thought that we should emphasize wine more than what we'd ever been able to do with Candlestick. And I sat down with my assistant Kari, who does these things with me, and I sprung it on her that what I wanted to do was I wanted to do six vintners at every game, and have different vintners throughout the season. So that would be 48 vintners a year. I thought she was going to have a heart attack.

Funny thing is, I thought it would be easy to get the vintners to do this, and the first vintner that I went to—and I won't name them—turned me down. And I thought, "Oh wow, I've bitten off more than I can chew." But from then on, it was pretty easy, and I've gotten everybody on board, and they bring wine, and they would have wines of theirs that people can purchase. From the wines purchased, they made a small donation to the 49ers Foundation [the team's charity organization that benefits Bay Area youth], which was nice to bring the wine and the foundation together.

Also, these wines are now available in all the suites, and [some are available] throughout the stadium at different price points. So that program is still growing, but it is really an attempt to bring wine in throughout the entire stadium.

This way, the wine is moving in and out so quickly that there's not a large inventory, so people get a chance to taste various wines, and they really develop an increased interest in wine. I know that there are people in the suites who have had … six wines throughout most of their adult life, and now they're tasting 48 wines a season, and they taste every one of those wines. So people get a lot out of it.

I've been a teacher throughout my entire adult life, so to me it is very natural to teach people about things that I really enjoy doing and love. So it's really educational and [about] sharing experiences.

Sebastián Zuccardi leads the next generation at his family winery