Portland Trail Blazers star CJ McCollum doesn't have to travel far to score great wine. The record-breaking shooting guard–slash-wine connoisseur has been in Oregon since the team picked him up in the first round of the 2013 NBA draft, and he's trained his palate on Willamette Valley Pinot. Late last month, McCollum announced the fruits of his off-court regimen: McCollum Heritage 91, a 2018 Chehalem Mountains Pinot Noir he made with Adelsheim Vineyard. It’s an ode to his childhood, his fiancée and his state's all-star grape.

McCollum, 28, made waves in 2019 when he broke a franchise record by scoring 37 points in a Game 7 win over the Denver Nuggets to advance the Trail Blazers to the Western Conference Finals for the first time since the 2000 NBA playoffs. Adelsheim joined the roster soon after: The winery helped create the Blazers' 50th anniversary commemorative wines, and are now working with the team to raise COVID-19 relief funds for the community.

"It's crazy how this all came to life with me being drafted by the Portland Trail Blazers and falling into the goldmine of Pinot Noir here in Oregon," McCollum told Wine Spectator. He's in good company with the Blazers, whose top tasters include Carmelo Anthony and Damian Lillard. The longtime fan was ready to jump into the wine game, "go[ing] through the process of what it's like to create a wine from start to finish."

In the early days of Heritage 91's development, McCollum blind-tasted several wines with Adelsheim winemaker Gina Hennen and was immediately drawn to flavors from volcanic soils. The resulting Pinot Noir is a blend sourced from three contiguous estate vineyard properties. "[CJ] is so engaged in the entire process and genuinely wants to learn everything he can about the business," Hennen said. Elaborating on their shared philosophy, Hennen added that "the final blend should contain echoes of each vineyard and yet be dominated by none of them."

The 2018 Chehalem Mountains Pinot Noir will be available for purchase Sept. 15 for $50; McCollum says more releases are in the works. He took a break from poking around his 600-bottle cellar to speak with editorial assistant Shawn Zylberberg about his new wine's genesis and falling in love with his local wine region, as well as his teammates' reaction to the news that he'd become a winemaker. 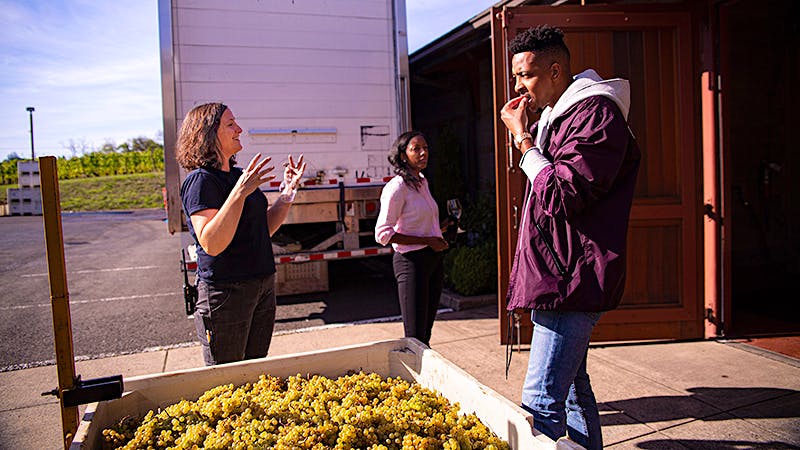 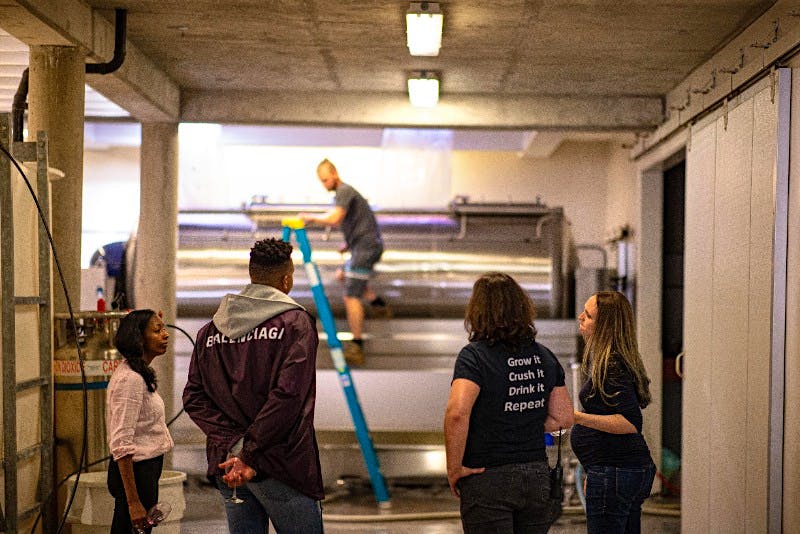 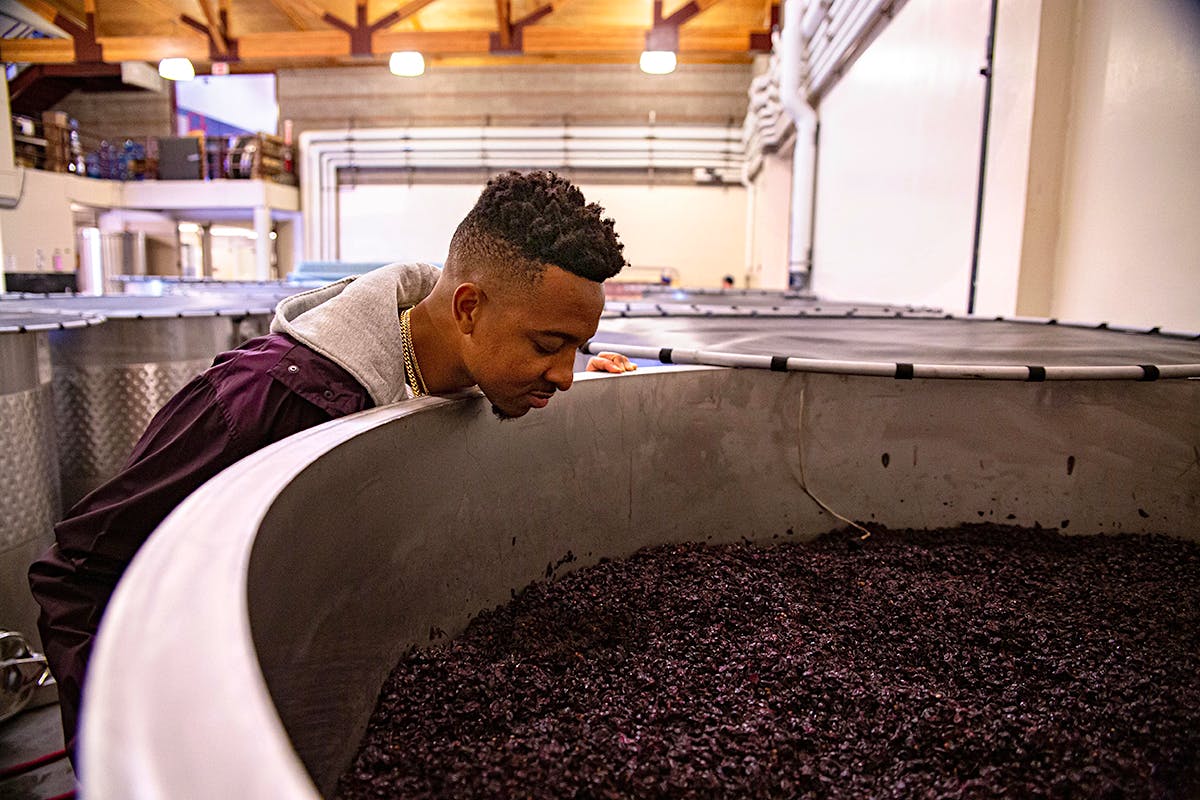 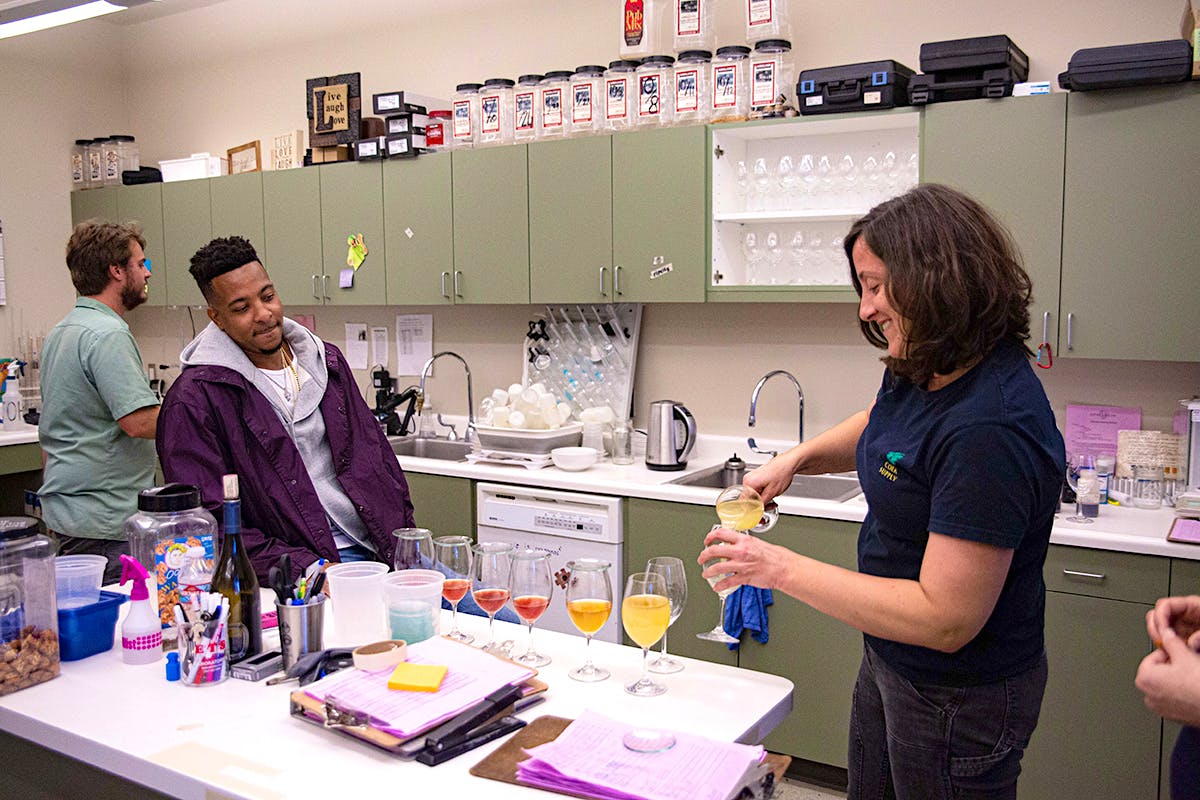 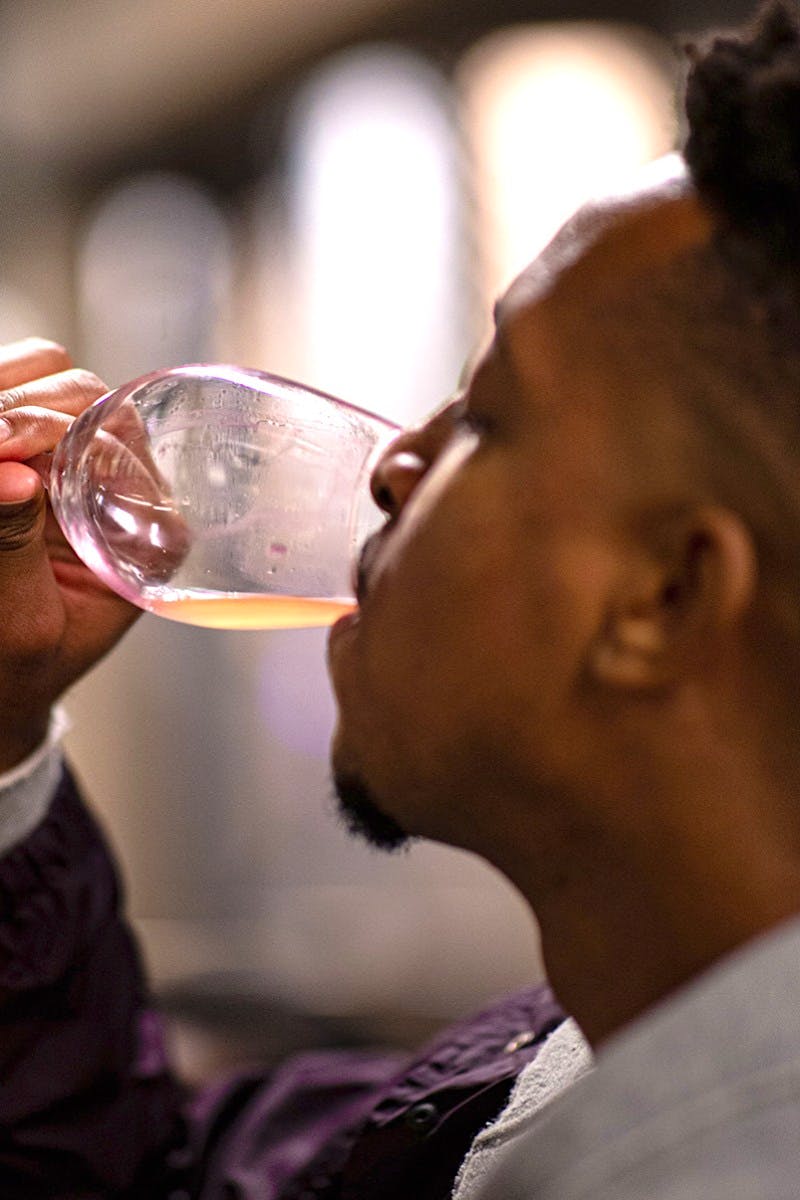 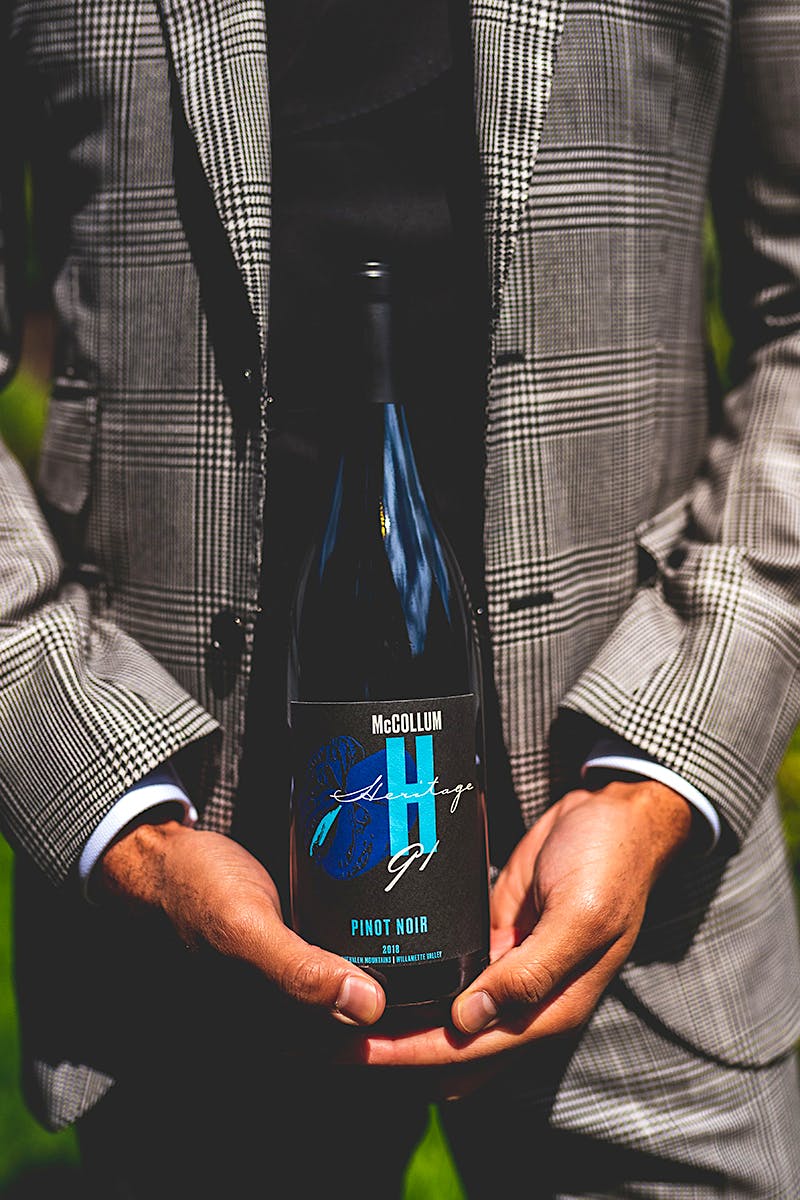 Wine Spectator: When did your passion for wine start?
CJ McCollum: It goes back to before professional basketball. My fiancée, [Elise Esposito], actually introduced me to wine in college, and I didn't really like it at first. My palate wasn't developed yet, and I was drinking on a college budget. But as I continued to want to learn more about it and drink it, my love for it grew. And then I got here in Oregon and it magnified that. The first winery I ever went to in Oregon was Stoller, and the first Pinot I ever tasted when I first arrived was Walter Scott. It changed my outlook on Pinot and volcanic soil. [Soon] I knew I was a big fan of Bryan Creek Vineyard and Willamette Valley.

WS: Why did you choose to partner with Adelsheim?
CM: It was a combination of things. Adelsheim reached out about a potential partnership and collaborative experience opportunity, and I jumped on it. I'm thankful that I've been able to learn about it and continue to visit the vineyard and dive deep into not only Pinot Noir, but what goes into making it and what you should eat with it. The fact that Adelsheim is LIVE [Low Input Viticulture and Enology] certified and believes in sustainability was a huge factor in my decision process. They don't use [excessive] chemicals, they prefer solar panels, and it gave me a chance to be as interactive as possible.

Gina Hennen took a lot of my advice in terms of my taste preferences, and brought the wine to life using multi-vineyard blends of many different Pinot Noirs. I think Gina has done a great job with making wine historically, so I felt extremely comfortable with putting my bottle in their hands.

WS: How has the team embraced Oregon's wine scene, and wine in general?
CM: We take a Sprinter van out to different vineyards and really enjoy the wine here and spend time together. But I've been fortunate to be with a lot of teammates that enjoy wine, along with coaching staff and an organization that enjoys wine in general, so we've been able to have a lot of fun. Coach Terry Stotts is a huge Château Margaux fan, so I usually gift him that for Christmas, and he's also the one who introduced me to Silver Oak some years ago. When assistant coach David Vanterpool was here, we drank Opus One, one of his favorite wines. Damian Lillard early on in his career was drinking Riesling and then switched over to red, so we have a really good balance of guys who like different things. We all provide wine on different occasions. Historically, I've gifted random Pinots from Oregon just to introduce people to so much versatility that's out here in the Willamette Valley.

WS: What's behind the label?
CM: First and foremost, I included my last name from a legacy standpoint, understanding what I want to accomplish outside the basketball world. Heritage is huge to me, understanding where I come from and what I come from, but it's also the street I grew up on. I grew up on Heritage Avenue [in Canton, Ohio], as a kid and it brings me back to my childhood. The anthurium flower on the bottom is my fiancée's favorite flower. Since she is the one who introduced me to wine, I thought it was only right to give her that nod, not only to our love for wine but our relationship. And the 91 is both of our birth dates, and that's something that we wanted to remember as we get older and look back on this bottle.

WS: Have your teammates had an exclusive first sip?
CM: They haven't tried it yet, and have been giving me a hard time because I've kept it under wraps and really didn't tell anyone until about a week ago. We all live close to each other and they've been saying, "We live this close and you never brought a bottle to our house?" So I'm gonna make sure all my teammates and homies get a bottle this weekend.

Under the Umbrian Sun

Chardonnay for the People

Joe Wolosz and Jeff Durham started their winery because they love hospitality, whether it's …

The retired NBA star talks about investing in rosé and Champagne, chasing bottles with …