Though Drew Bledsoe has been making winning wines for more than decade, his past few seasons have been championship-level by any standard. After the four-time Pro Bowl New England Patriots quarterback retired in 2007, he founded Doubleback in Walla Walla, Wash., near where he grew up. What began as a single Cabernet produced from sourced fruit has grown into a company with four estate vineyards planted to nearly 60 acres; a svelte 14,000-square-foot gravity-flow winery completed in 2018; a tasting room in Bend, Ore., that opened in 2019; and three brands, the most recent of which, Bledsoe-McDaniels, launched in 2019. (Josh McDaniels is Bledsoe’s director of winemaking.) The latter brings a Willamette Valley Pinot Noir into the Bledsoe family and will also encompass three single-vineyard estate Syrahs from Walla Walla.

Still, the ambitious vintner says, “We feel like after 12 years we’re just now exiting the startup phase of our business and trying to figure out what we want to be when we grow up.” Bledsoe spoke with Wine Spectator associate editor Ben O'Donnell about how he came to love Syrah (and Nebbiolo), how he chooses some projects and passes on others, and his wine rivalry with fellow quarterback-winemaker Damon Huard. 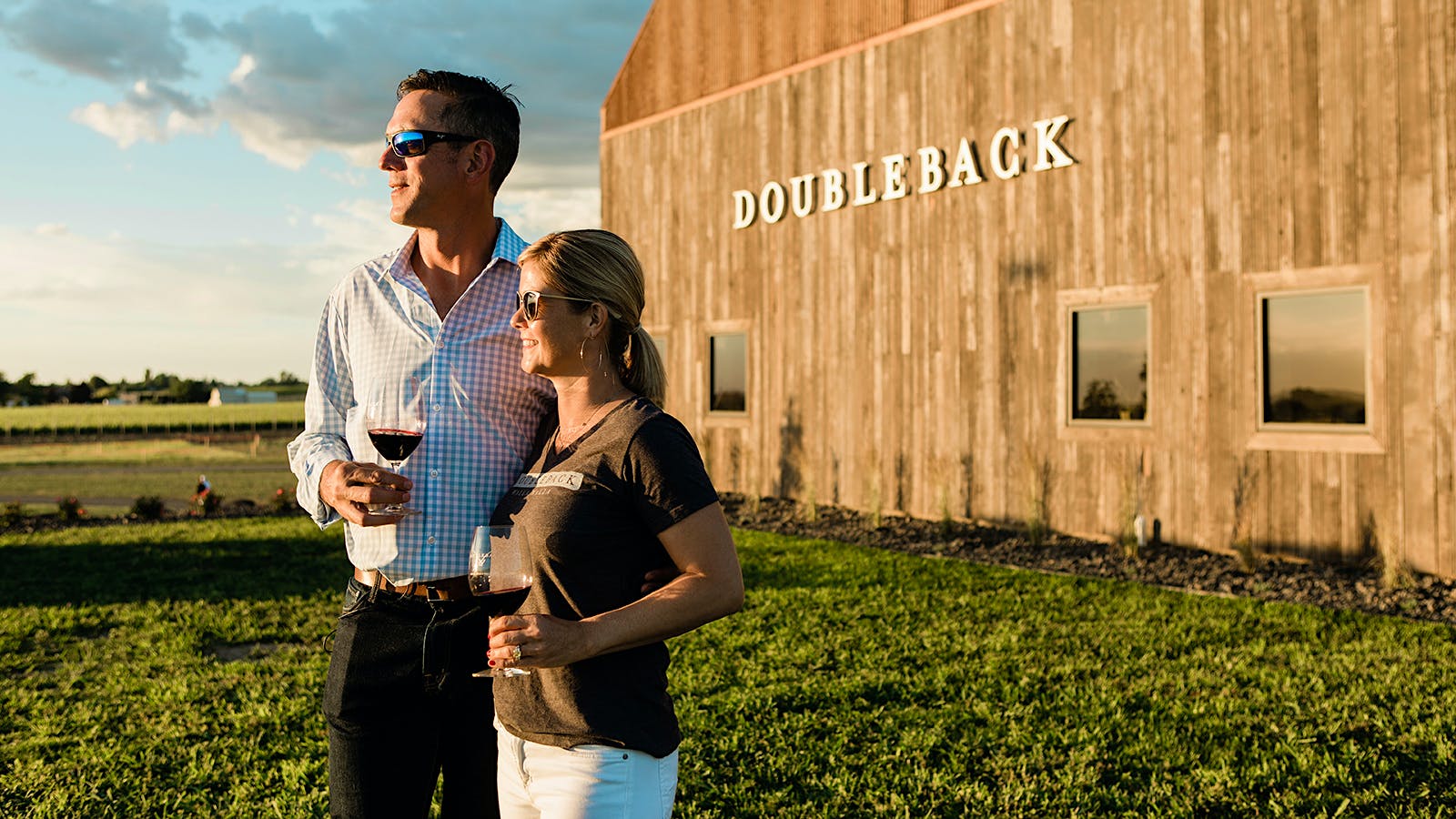 Drew Bledsoe escaped coverage for cover crops in eastern Washington. Pictured at the new winery with his wife, Maura. (Courtesy of Doubleback)

Wine Spectator: What led you to decide you were going to make wine in Washington?
Drew Bledsoe: We were in New England playing for the Patriots and there were a lot of guys that were into wine. So whenever guys came over, I told them to bring a bottle of red wine. They would generally bring something from Napa or something from Bordeaux and we would do blind tastings at the house—three, four, five wines. And I would always, of course, include something from Walla Walla. I wasn’t playing for second place; I’d grab some Leonetti or some L’Ecole [No. 41] Apogee or Perigee or some Woodward Canyon. But we would always win! So that was sort of an epiphany for me. I could go back to my hometown and not just make wine, but make wine that we would feel stands up on the world stage.

WS: How have both your wine tastes and the wines you make evolved?
DB: I think I started where a lot of people start when they first get into wine: with Napa. Over time, I’ve found that what I’ve started to appreciate more were wines that had a little more elegance to them, a little more nuance. We drink a lot of Barolo and Barbaresco, from northern Italy; those are probably my favorite wines in the world.

How we decide what wines we’re going to make is: We try to make wines we like. And as I’ve evolved in terms of what I like to drink, you’ve seen us going toward that style of winemaking. With the Syrah, and even now with some of our specific lots of Cabernet, we’re fermenting and also aging in concrete. I think you just get more purity of fruit with concrete than you do sometimes with oak. So we’re continuing to evolve.

WS: And these tastes informed your decision to start making single-vineyard Syrah and Oregon Pinot?
DB: We live in Oregon, so we’ve very close to the Willamette Valley. We probably drink more Willamette Valley Pinot Noir in our house than anything else. And then we decided to do this single-vineyard Syrah from the [estate] Lefore vineyard. It leans a little more Old World than New. We tend to harvest a little bit earlier than most. We try to capture some of that black pepper in Syrah—less fruit-driven and more mineral-driven. They’re passion projects based on our own preferences and we hope other people like them too.

WS: After years of sharing and leasing winemaking facilities, you opened your own winery in 2018. How is it helping you to realize what you want to do with the wines?
DB: It's allowed a few things. No. 1 is tighter quality control. Everything is under one roof; we don't have to go to three different spots to check on barrels. We built a facility that's function over form. It was designed to allow Josh and the team to do exactly what they wanted in the winemaking process. So we're gravity-flow from the tanks down into the barrel cellar. [It] also allows us to bring more fruit into the building, be more selective about what makes it into the blend. They other thing that's happened in the past year is we now have our own farming company. So now we're fully integrated from the dirt to the bottle in the winery … One of our guiding principles is to be sustainable in everything we do.

WS: It's been a busy few years for you. Have any opportunities or potential projects given you pause?
DB: There was one project that we considered that was more of just a mass-production branding exercise, and when we looked through our core principles it didn't fit any of them. It didn't fit the passion, it didn't fit the attention to detail, it didn't fit the quality, it didn't fit the purpose. So we reevaluated and decided not to do it. We don't aspire to be a 500,000-case winery. But we do want to continue to grow and embrace authentic new projects. 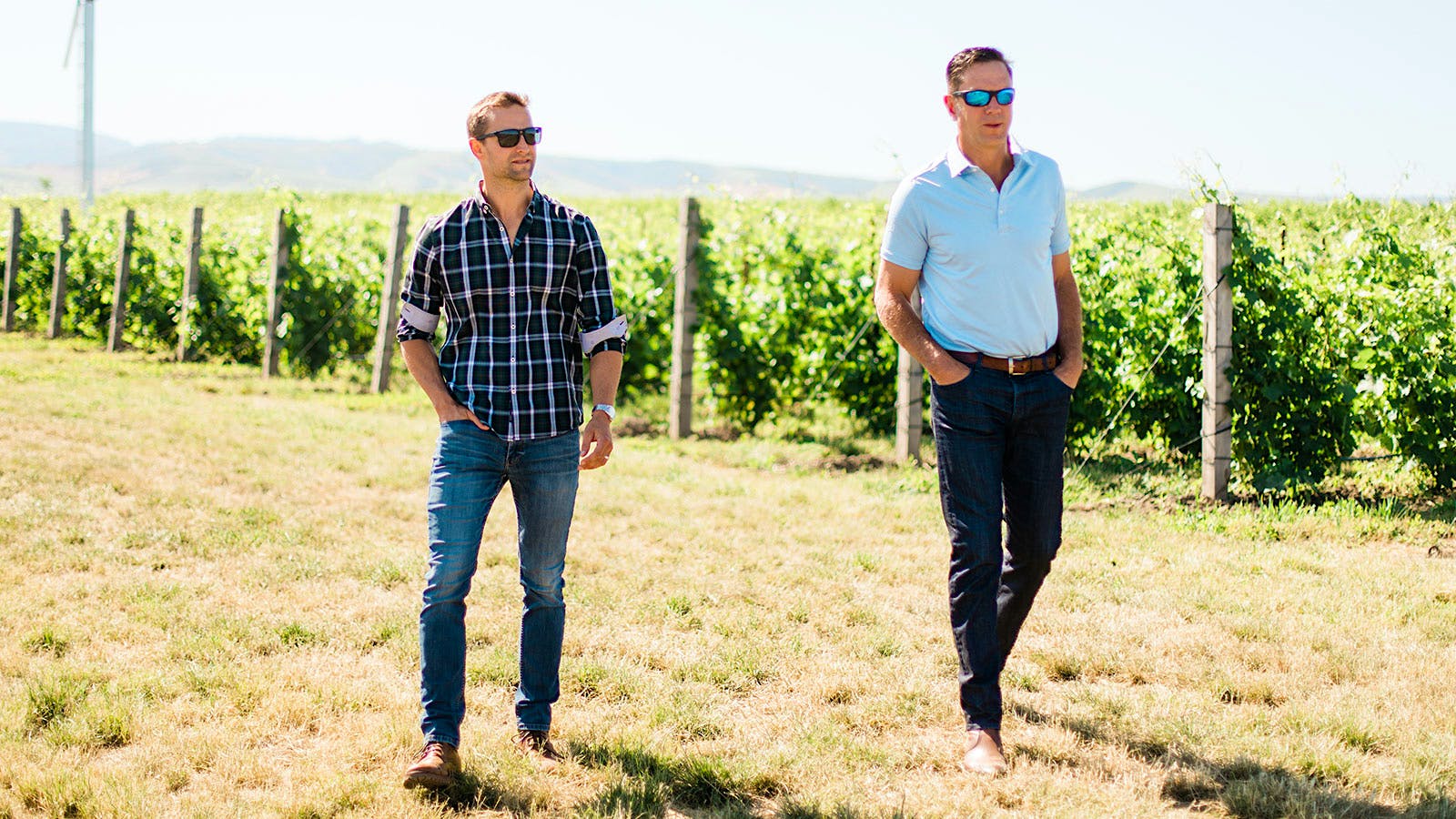 WS: Walla Walla is still an underdog region in some respects. Is there “team spirit” in the winemaking community?
DB: One of the striking differences between the way we competed in football and the way we compete in wine is, in football, whoever we played, they had to lose so I could win. And in wine, particularly in Walla Walla, if my neighbor has success, it’s better for my business. So all of us collectively work together to grow the brand of the valley. That makes it a lot of fun; there’s a great open sharing of information.

WS: How about the "community" of NFL player–winemakers—is there some friendly competition with them?
DB: The thing that I like the most that's happened in the past decade with athletes that have gotten into wine is the guys are really taking the wines seriously. It's not some other winery's third or fourth brand that they're just slapping their name on to sell. Rick [Mirer] is making some killer wine down there in Napa. [Charles] Woodson's making serious wine, Dwyane Wade's making some good wine, Tom Seaver was way ahead of all of us. And then Damon Huard up here with Dan Marino, they've got Passing Time in Washington.

I was actually at a wine dinner with Damon last night. Damon went to the University of Washington and played quarterback there, and I played quarterback at Washington State, and this week [last November] is the Apple Cup game, which is the annual Washington–Washington State game. For the past five years now we've done a wine dinner together leading up to the Apple Cup. We can talk a little trash to each other but also pour some killer wine. I think because the guys who have gotten into it now are serious about it, it's started to remove some of that stigma of "jock wines." People are starting to recognize that these are not halfhearted projects.