Toward the tail end of Dan Marino’s Hall of Fame career, the Miami Dolphins quarterback got a new backup, Damon Huard. A mentor-mentee relationship on the field soon became a friendship in wine: After games, the two would retire to Marino’s Miami home to watch movies and dive into the veteran QB’s 5,000-bottle collection. “I had a fun time robbing Dan’s cellar,” Huard jokes. After both finished their NFL careers, they decided to go pro, founding Passing Time, a Cabernet-focused winery in Washington, with the 2012 vintage. The name evokes “that football theme, along with family and friends drinking wine,” explains Marino. With Avennia winemaker Chris Peterson consulting, the wines have quickly dominated the field. All three of the 2016 vintage appellation Cabernets—Horse Heaven Hills, Red Mountain and Walla Walla—earned outstanding ratings of 90-plus points.

Both QBs grew up around wine, though they didn't necessarily know it at the time. In the Italian neighborhood of Pittsburgh where Marino was raised, wine was always on the table, much of it homemade by his uncles, great-grandfather and neighbors. Huard is a native of eastern Washington, from a family with deep roots in the agriculture business; he'd later discover the value of such connections in getting access to first-rate grapes in the area. The pair spoke with editorial assistant Shawn Zylberberg about the old days of NFL booze culture, their big-brother-little-brother relationship and what they've learned in just a few whirlwind years of winemaking. 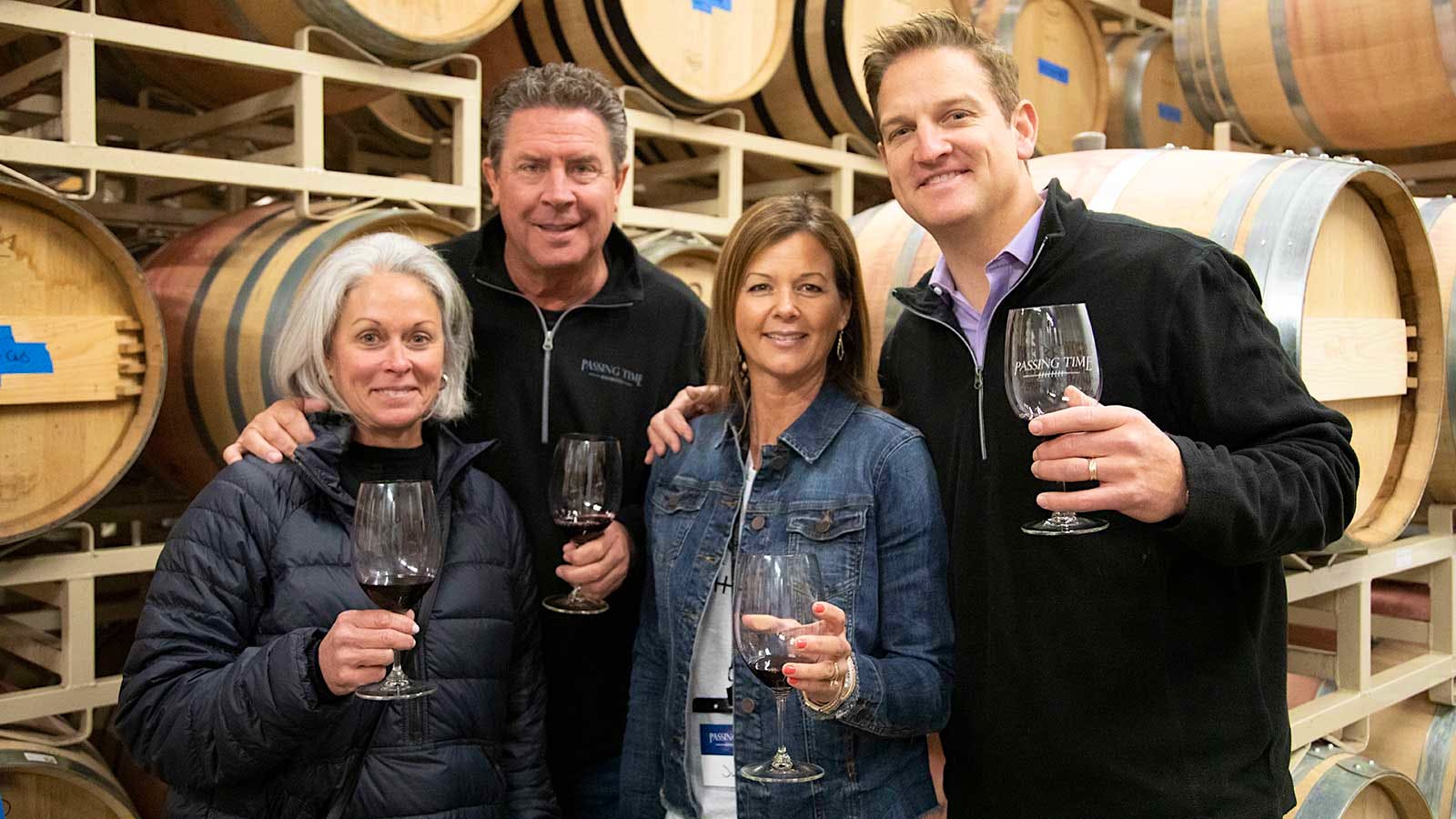 Wine Spectator: How did you two come to love Washington wines?
Dan Marino: Damon came in as a rookie, and he was terrific to me as far as helping me as a quarterback. As we started to go out and have team dinners, I started trying to turn him on to Washington wines because he was drinking beer, rum and Cokes, and I was like, “You have great red wine from where you grew up!” I was surprised he hadn’t tried the wines. Damon ended up coming over to my house for dinner and other things, and I would break out some Col Solare, DeLille and Andrew Will. I told Damon, “You’ve got to try these wines,” and I got him hooked. As time went on, we talked about maybe creating a winery someday in Washington. It turned out that we didn’t do it right away, but instead a few years ago, and it’s been a lot of fun.

WS: Did other teammates drink wine as well during your playing years?
Damon Huard: I think most of the guys on the team were drinking Hennessy in Miami, if I remember. Danny and I were into the fine wine! We were good boys. But it’s funny because, back then, it wasn’t as big a deal. There would be beer at the pregame dinners the night before games. Could you imagine that in this day and age?

WS: How did you come up with the name “Passing Time”?
DM: When we started thinking about names, [my wife] Claire said, "You ought to call it Passing Time." It has that football theme along with family and friends drinking wine.
DH: We hired people to come up with names, we drew up all these ideas and we paid a lot of money, and [they] came back with all these goofy names. And we’re like, “Why did we waste our time, effort and money with that? It’s Passing Time." When our label designer put it on the label, we knew: That’s it. 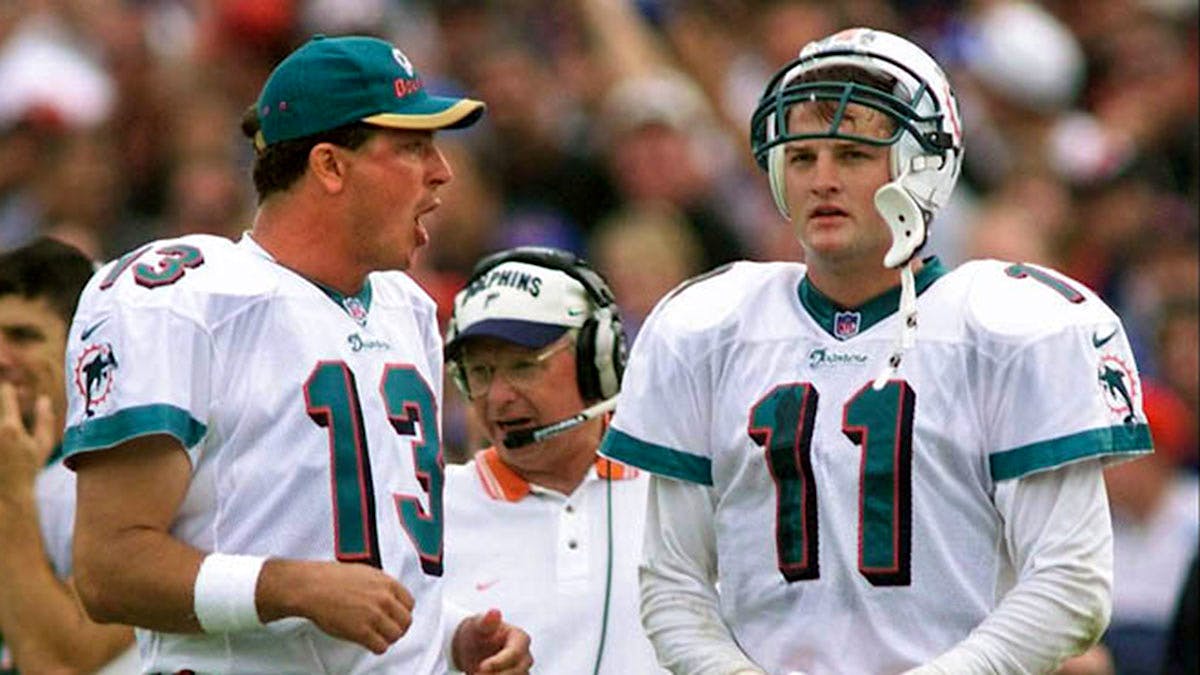 WS: How would you say your personal relationship has helped make Passing Time a success?
DM: We both grew up the same way as far as playing athletics, being family people and being competitive. You want the best, and if you’re going to do it, you do it the right way every day. That’s the one thing we have in common, along with Chris Peterson, making sure our wine is the best it can be. We’re all in this together to make something special, and that is the background we all have, the one common denominator.

DH: I was the oldest of three boys, so it was great for me to go to the Dolphins and play alongside Dan Marino. Dan was like a big brother to me that I never had. So I always have had so much respect for him. This has been a cool project because although we live far apart we can build a brand together and compete.

Chris Peterson has been awesome. Danny and I wanted to do this for a long time and my family’s connection to the farming industry in eastern Washington has been a great help, but the last piece for us was finding that winemaker. It’s been good fortune or dumb luck meeting Chris and connecting right away. We have a great relationship because he makes very different wines at Avennia, so they don’t compete.

WS: What’s one thing you learned on the field that’s essential in the winemaking business?
DM: Go deep or go home. With wine and football, or whatever it may be in life, it’s about having passion for it. I have passion for football still to this day, and I have passion for what we’re doing with our wine at Passing Time.

DH: I would say that the competitive side is great, but I think what made the best teams that I’ve played on is relationships. At the beginning, I don’t think I understood the moving parts in the wine business and all these neat people I met over time, the barrel reps, the farmers. Much like in football, it’s about those relationships and those teams that were close and got along and made it work. Those were the teams that won.

Dave Phinney, the mind behind The Prisoner Wine Co. and other innovative projects, keeps …

Adjacent to the coastal city of Vallejo, California, a tiny peninsula has seen little life …

In the Phinney Spirit

Elevating the Wine Experience in Sedona