Oakland Raiders and Green Bay Packers jack-of-all-plays Charles Woodson caught attention as a football talent early, in his high school years, but he also started making wine young. The nine-time Pro Bowler fell in love with Napa Valley’s wine scene when he was in training camp there, and in 2001, at 25, he tackled his first barrel, a Merlot, with a winemaker friend at Robert Mondavi. In 2005, he went commercial with TwentyFour, a high-end label focused on Cabernet from near Calistoga, later called Charles Woodson Wines. Tasting Room24 in Napa, which Woodson describes as a “wine sports bar,” followed. “Drinking wine at a football game, now it’s an accepted thing to do, and I think that’s awesome,” he says. "It's a beautiful match now."

Woodson retired from the NFL in 2015, and in 2019 he launched Intercept, a collection of Paso Robles and Monterey wines comprising Cabernet, Chardonnay, Pinot Noir and a red blend, in partnership with O’Neill Vintners, sold at a more tailgate-friendly price of $20 per bottle. Woodson spoke with Wine Spectator associate editor Ben O'Donnell about bonding over wine on the team plane, his special attachment to Napa, and how setbacks in the vineyard must be dealt with much like setbacks on the field. 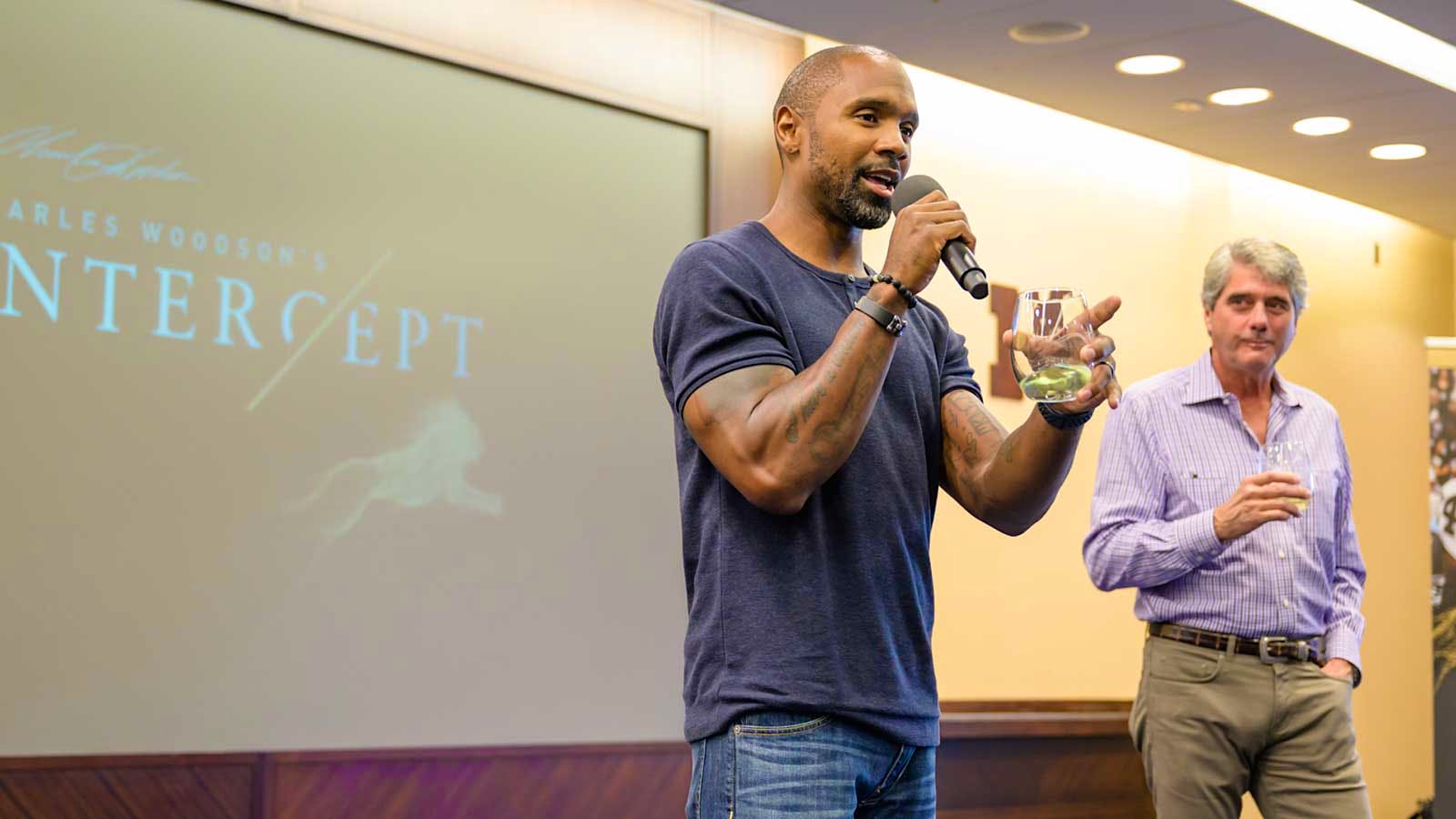 Charles Woodson and winemaker Jeff O'Neill at the kickoff. (// Photagonist.ca)

Wine Spectator: What were some of your early wine experiences with the Raiders?
Charles Woodson: I started in the early 2000s after being in Napa Valley a couple of times a year with training camp for the Oakland Raiders. I just developed a great appreciation for wine, a great appreciation for Napa itself; it's such a great town. Once I got acclimated to where I was at and what it was all about—wine and food was everything out there. And I just absolutely fell in love with Napa.

Early on, [my wine experience] was Robert Mondavi. That’s the first one that I can really remember going to, touring a little bit, seeing the barrel storage rooms, walking around the vineyards. I think as my career kind of went along, more and more players that I knew started to get into wine. Rick Mirer was really into wine, so I remember times when we would be traveling back and forth to games—this was before they had all the bans on having alcohol on the team planes—we would bring bottles of wine and we would all break bread together.

WS: What have you learned since you started making your own wines?
CW: From a business standpoint, a lot of people don’t go into it with their eyes wide open, everything that goes into having your own label. As a young guy getting into that business, you kind of got to learn things the hard way. All the little details about the storage and the barrels, all of the little intricate details that go into it—it can be overwhelming. My initial label was a high-end wine. I could only cater to a certain person for the most part. With O’Neill, we can offer more varieties that are affordable to my fans and to people who love wine.

[The NFL had] a rule where you couldn’t promote an alcoholic product. My pushback was that I wasn’t promoting someone’s brand out there. This is actually my business. How do you stop me from entering into a business?

WS: As your winemaking has evolved, how have your personal tastes evolved?
CW: I'm a California guy. If I'm out and looking at a wine list, I'm looking for Napa Valley, I'm looking for Alexander Valley or Paso Robles. I'm very California in my drinking; I like big, bold Cabs, I like fruit-forward flavors.

WS: It seems like in the past few years the wine culture of NFL fans has intensified. Would you agree that there is more overlap between wine and football now?
CW: I think that there is. When you look at tailgating and being at football games, there are more and more people who are just as apt to bring wine to the tailgate as they are different spirits and mixers. Or even if they're in the game, if they're in the suites. At the bar, there's more than just spirits and beer, there's wine that's always involved. I'm not sure that was always the case. But it's a beautiful match now.

WS: What would you say you need to understand to succeed in both football and wine?
CW: There are similarities as far as the product that you get. When you watch the game on Sundays, you see the end product of the time that I put in the week before, maybe the summer before. There’s a lot that goes into that actual Sunday. You talk about wine, you go into the store, you buy a bottle of wine, you go home, you open it, you drink it, and you’re satisfied with what you’re getting. You just see the end product, but you don’t necessarily know what had to go into it to be that way. The weather had to be ideal, can’t have any problems with fog or insects. So there are a lot of different pitfalls that can get in your way. Just like athletics: You could bruise your hip, there’s a lot of things that can happen, but you’ve still got to pull through on Sundays.