This week marks 50 years since Neil Armstrong declared, "The Eagle has landed." But after making that historic announcement, Armstrong and Buzz Aldrin were holed up in the cramped lunar lander for another six-plus hours before stepping out on the moon. So Aldrin did what any of us might after a particularly intense day at the office: He broke out the wine.

It wasn't exactly a soiree: Aldrin wanted to take Communion and had brought along some bread and a little chalice; he later wrote that in the low gravity, the wine “curled slowly and gracefully up the side of the cup."

Alas, it didn't set a precedent, and 50 years later, NASA doesn't play around when it comes to alcohol consumption. “Alcohol is not permitted onboard for consumption," NASA public affairs officer Katherine Brown explained to Unfiltered via email.

But "there have been experiments in the past that have flown alcohol mixtures," Brown said. As with everything you do in space, safety is key. "Use of alcohol [is] controlled on the space station due to impacts to the water recovery system." It is "contained to not interfere with the station's regenerative life support systems," which we feel confident in saying is a thing you really don't want to interfere with. A recent experiment Brown cited was when astronauts took Budweiser barley up to the International Space Station to evaluate how it would fare in space, so we can eventually make Mars beer.

But Mars wine could be even more fortifying. A study funded by NASA and published July 18 in Frontiers in Physiology found that resveratrol, the red-wine compound that makes you strong and healthy here on the blue planet, could help prevent muscle deterioration that space colonists would have to deal with in low-gravity conditions on the red one.

The Russians, for their part, have been drinking in space for "health" reasons since at least the '70s. Cosmonaut Aleksandr Lazutkin told the Interfax agency back in 2010 that doctors had recommended Cognac in his and his comrades' rations to "stimulate our immune system" (he did not say how much Cognac was required). Around the same time, NASA was preparing to equip the Skylab team with Paul Masson California "parabolic" Sherry, but unpleasant aromas and killjoy earthlings grounded that plan. But they couldn't say "non" to a Frenchman: On the first French-American collaborative shuttle flight in 1985, Patrick Baudry packed a half-bottle of 1975 Château Lynch-Bages. It remained safely corked, however—life support systems and all that—and is now on display at the château.

Finally, for the occasion of the 50th anniversary of the moonshot, Hawaii brewer Steve Haumschild decided that if man could not taste in space, we should at least be allowed to drink spacebeer down here. According to Forbes, he teamed up with two NASA research pilots for a special mission: Interplanetary Ale. With a baited petri dish, the pilots were able to catch yeast particles at 70,000 feet, some of which proved suitable for brewing.

And as for the first to ever do it? Aldrin and crewmate Michael Collins have been some very online octogenarians this week, posting pics of their various galas and fêtes and partying like it's 1969.

We're not really in the business of complaining about wine here at Unfiltered, but there is, of course, one really big drawback—it stains. Not trifling little bleach-pliant stains—deep-rooted, dark, impossible-to-hide-your-shame stains.

So we were surprised to learn that a team of scientists from the University of Manchester in the U.K. has been going around spilling wine on their clothes on purpose—and hit on a potential tech breakthrough in the process. The researchers were looking for ways to improve the conductivity of wearable tech devices and headed to the grocery store.

After picking up a few bottles of "the most discounted red wine on the shelves," as Dr. Xuqing Liu recalled to Unfiltered via email, they paraded back to the lab and began doing the unthinkable: making wine stains. It turned out to make perfect sense. "The mechanism by which the stains of red wine, coffee and black tea are difficult to be washed off on clothes is precisely the scientific problem that needed to be solved in the development of wearable devices," Liu explained. "The key chemical is tannic."

A big challenge to developing wearable tech is figuring out how to bind conductive materials like circuit boards to fabric, while keeping the item flexible. The formerly frustrating binding power of red wine stains proved to be the solution. Circuits can be printed directly onto the tannin-stained fabric (cotton in this case), creating flexible circuit boards and, thus, comfortable wearable technology. With this new technique, Dr. Liu and his team have developed devices like a pressure sensor and a wearable switch controlled by finger touch.

So this study, published in the nanotechnology journal Small, gives us a few wine-related talking points. First, wearable technology can now be more comfortable and affordable, all thanks to wine. And second, next time you're wearing a wine stain, you can inform anyone who dares snicker that no, no, it's actually just the latest in top-secret bionic technology that gives you superhuman skills.

Buffalo Bills quarterback Josh Allen may have been a rookie to the NFL last season and a rookie to the legal drinking age not long before that, but in last week's Korbel Spray-Off at the American Century Celebrity Golf Championship in Lake Tahoe, Nev., he beat a field of veteran celebrity celebrators with his impressive long-distance cork-popping. With an 83-foot blast, he not only triumphed over 37 other cork slingers, he set a new record for the competition, which is now in its 13th year. With the win, Allen got a $5,000 check from the Korbel Toast Life Foundation to benefit a charity of his choice, the Leukemia and Lymphoma Society.

"Each year, we look forward to presenting fans and players with the renowned Celebrity Spray-Off as part of Korbel's signature events at the tournament" Gary Heck, owner and president of Korbel, told Unfiltered via email. "This event is not only an opportunity for players to have some fun and celebrate with Korbel, but more importantly, it's an effort to raise money for a good cause through the Korbel Toast Life Foundation." 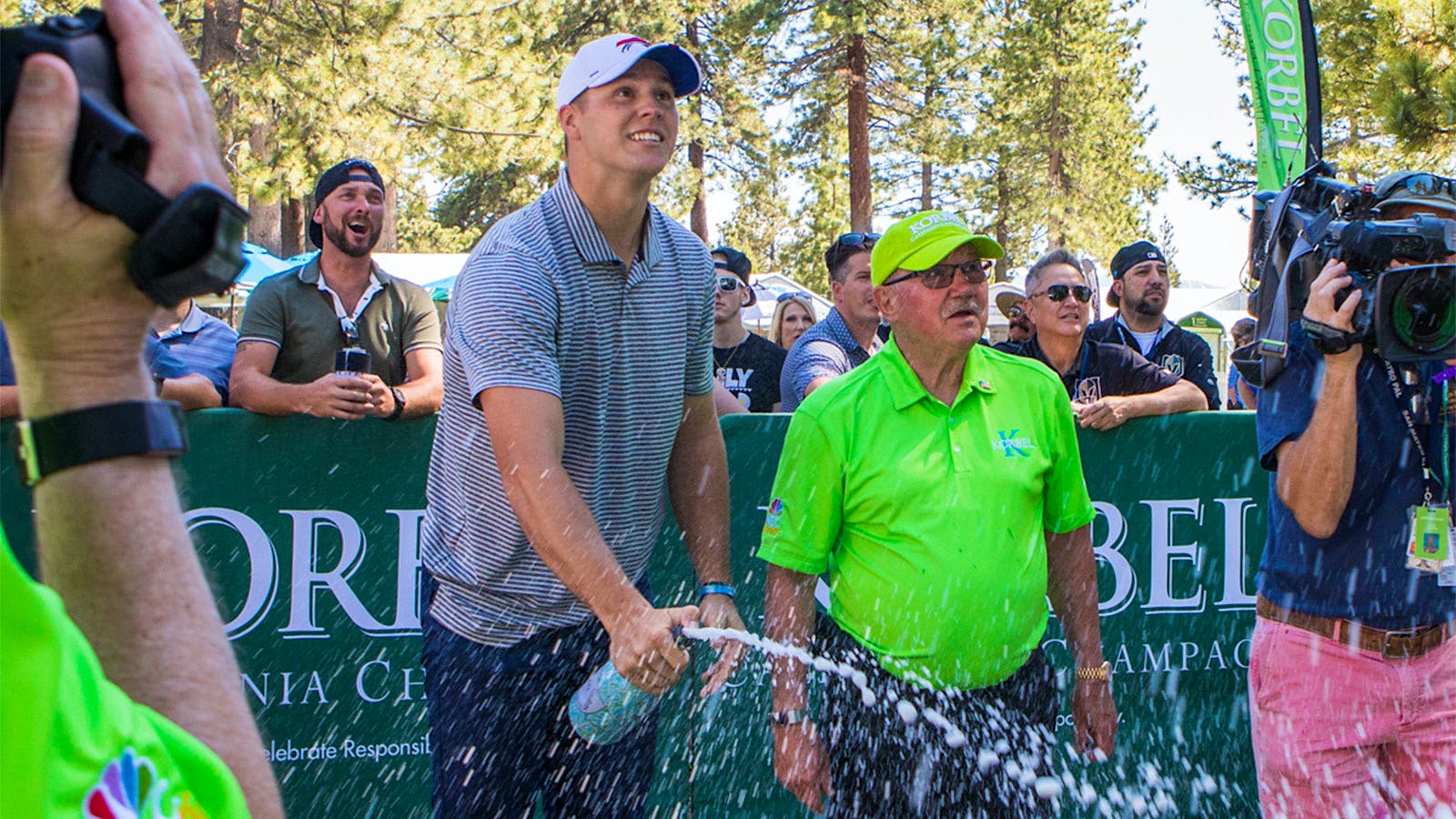 Josh Allen uncorks one for 27 yards.

Allen wielded a bottle of "Aloha" edition Korbel California Extra Dry to vanquish a field of sports and entertainment stars who know their way around a bottle of victory bubbly, including defending champion Steph Curry, Charles Barkley, Bode Miller and fellow QBs past and present Andy Dalton, Trent Dilfer, Doug Flutie and Joe Theismann. On Friday, Korbel followed up with its Closest-to-the-Pin tee-off on hole 17, which former MLB pitcher Derek Lowe won, landing a ball less than two feet from the hole and getting an additional check from Korbel for $12,500 to the Tahoe Prosperity Center community charity.