Obviously we think that winemakers are the true A-listers of California, but it's nice to see it made official. Earlier this week, Marcassin maven Helen Turley, one of the best to do it, was inducted into the California Hall of Fame by fellow winemaker Gavin Newsom, of PlumpJack and gubernatorial fame. Joining her in receiving the accolade was wine-championing star-chef-to-the-stars Wolfgang Puck. "It is wonderful to be recognized for 40 years of doing what I love—which is growing and making wine in California," Turley said at the ceremony in Sacramento, giving a cri de coeur for her beloved state: "This special place deserves our love, and now it deserves our help, in protecting its land, water, air and most importantly, its people, from those who would destroy them all."

Turley's winemaking elevated some of the state's hottest Cabernet houses—Peter Michael, Colgin, Bryant Family—to their fame before she struck out for the Sonoma Coast, founding Marcassin Vineyard in 1991 and crafting some of the world's finest Pinot Noirs and Chardonnays. She also made her venture a beacon of sustainable winegrowing and earned Wine Spectator's Distinguished Service Award in 2010. "It was indeed an honor to be included in such an outstanding group of inductees," Turley told Unfiltered via email. "This ceremony was a hymn to California, what it loves, its accomplishments, and its great people. If I could draw, I would reverse Steinberg’s New Yorker cover from west to east."

The California Hall of Fame was founded in 2008 "to honor legendary people who embody California’s innovative spirit and have made their mark on history," according to its mission. Inductees have included Golden State greats from Buzz Aldrin to Barbra Streisand, with a who's who of wine and dining names in the mix: Turley and Puck join Robert Mondavi, Alice Waters, Francis Ford Coppola, Warren Winiarski and Thomas Keller.

Puck, another DSA winner, immigrated to California from Austria when he was 25, and famously took to California cuisine, California wine and California vibes: His empire includes Wine Spectator Grand Award winner Spago Beverly Hills, and he cooks for the Oscars every year. "I really thought once I arrived here, there's no other place in the world I'd rather be ... I always tell people, 'California was my dream to be, and California always will be my home and my dreams,'" he said. Game recognize game, he also doffed his toque to the winemaker, saying, "I have to congratulate one special person, who really, I look up to so much, is Helen Turley over here—who makes some of the best wines!" 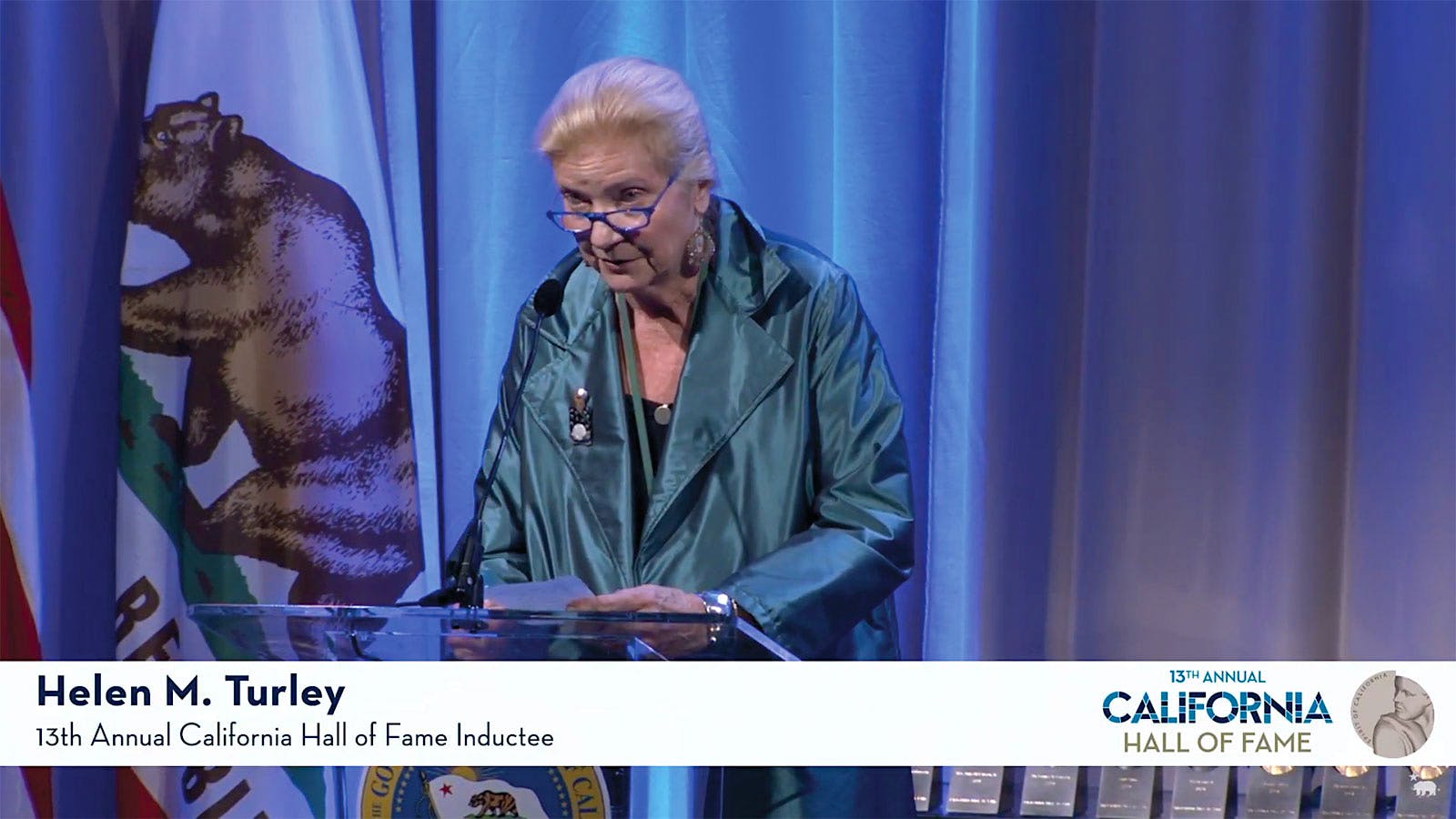 Turley's section of the Hall of Fame exhibit at the California Museum features a few issues of Wine Spectator, we're told. (YouTube / thecaliforniamuseum)

Also in the 13th class of honorees: Skateboarder Tony Hawk, and you bet he has a wine connection. While Gov. Newsom is not himself in the Hall of Fame yet, he does hold one important near-prerequisite, which is, of course, a Wine Spectator Distinguished Service Award.