When Kathryn Walt and Craig Hall met in 1991, both were enjoying fruitful careers. Craig was a successful Dallas-based entrepreneur, real estate developer and philanthropist, while Kathryn, after spending years as a public interest attorney and community advocate, had just embarked on an ambitious campaign: "All I wanted to do was be mayor of Dallas," she says.

The two were introduced by a mutual friend, Texas' then governor, Ann Richards. "Ann knew both of us were available, and she played matchmaker," Craig says. Kathryn agreed to meet with Craig, purportedly to request backing for her mayoral run. When the conversation turned to her passion project, a namesake wine made from the Cabernet grapes she was then growing in Mendocino, Calif., Craig professed he didn't much care for wine. Kathryn responded, "Well, you've never had any of my wine," and gave him a bottle to take home, encouraging him to let her know what he thought. He called a few weeks later not to talk about wine, but to invite her to dinner.

Nearly 30 years on, asked whether he tried that Cabernet, Craig is blunt: "Nope," he laughs. And yet, that was the bottle that started it all.

By 1995, Craig's wine aversion was a distant memory; "I was quite quick to be willing to be an adapter," he says. That year, he and Kathryn acquired the 19-acre Sacrashe Vineyard in Napa's Rutherford AVA, growing Cabernet that they sold to Silver Oak and Merlot that went to Duckhorn. But the business took a back seat as Kathryn's public service career surged, this time with an invitation from President Bill Clinton to serve as U.S. ambassador to Austria. From 1997 to 2001, she used her posting abroad to spread the word about California wine. "Part of your job as ambassador is to share your culture," she says, "and this was so much a part of our culture—that we make wines too, and beautiful wines."

The Halls love living in Rutherford, close to the action, but in 2014, they decided that they could use a vacation home to get away and unwind every now and then. And with four children and nine grandchildren between them, they knew they needed a home with some space.

Kathryn, who had lived in Honolulu as a child, suggested Hawaii. "That island lifestyle—I'm sure that's why I wanted to go back," she says. They found an oceanfront house in Maui's Makena Beach. It needed work, which they would have to do remotely, but they weren't intimidated; they had designed their Napa home from Vienna, after all.

However, Kathryn found that the "island lifestyle" that had been so appealing at first was a double-edged sword. "Everything about Hawaii, part of its charm? It's slow," she laughs. "Everything is slow."

Craig says they got precisely what they were looking for. The home's neutral tones and neat angles recede against the vibrant coastal surrounds. The mellow design is also a fine backdrop for their art collection; the dining area, for example, includes a piece by Kiki Smith. 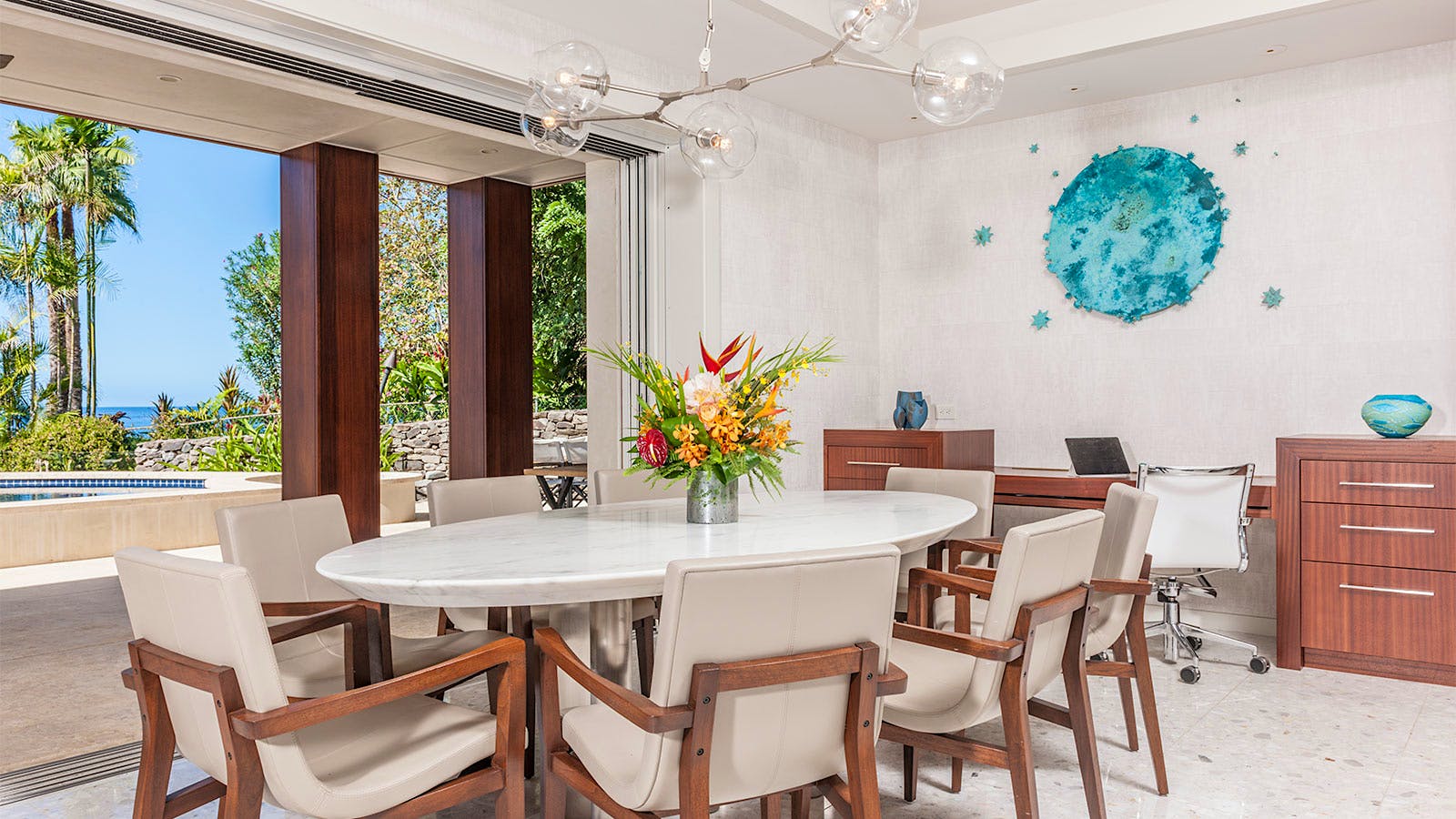 In the dining space, floor-to-ceiling glass windows by NanaWall fold back to the open air. The Danby marble–topped dining table is custom-made by Emily Summers; the chandelier is by Lindsey Adelman; the arm chairs are Siren by Holly Hunt; and the wall art is by Kiki Smith. (Tony Novak-Clifford)

The couple keeps meal prep low-key. "We don't spend a lot of time cooking fancy things," Kathryn explains. "There's just tossing the salad and having a glass of something while you're doing it and the kids are running around." Standby sips include Bollinger Brut Champagne Grande Année and white Burgundy Larue Puligny-Montrachet. Though they have a handsome indoor kitchen with teak cabinetry, sleek white Danby marble surfaces, and a gleaming range and warming drawer by GE Monogram, most of the action happens outside, where Craig can grill by the tiki torches, under the palm trees.

Floor-to-ceiling glass NanaWalls fold back between the living, dining and kitchen space and the patio to open the house to the tropical flora—and sometimes fauna. "Occasionally, we get birds flying in," Craig laughs. "But you can't have everything."

At the Maui Home of Kathryn Walt Hall & Craig Hall 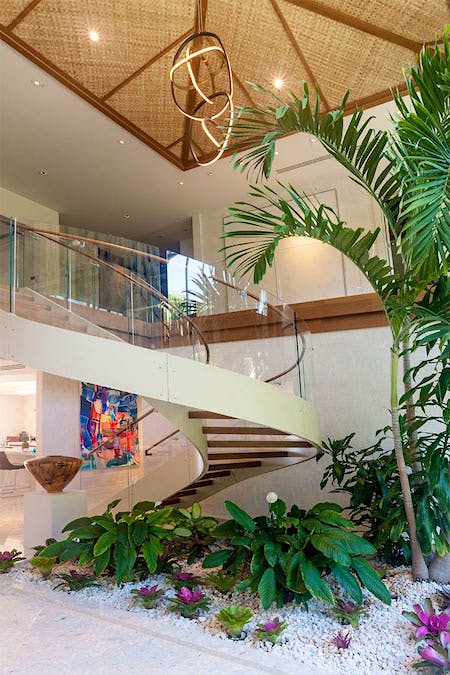 In the foyer, a palm tree, rock garden and glass-sided spiral staircase draw the eye up to the chandelier by Niamh Barry and thatched lauhala mat ceiling, woven from the leaves of the local hala tree. (Tony Novak-Clifford) 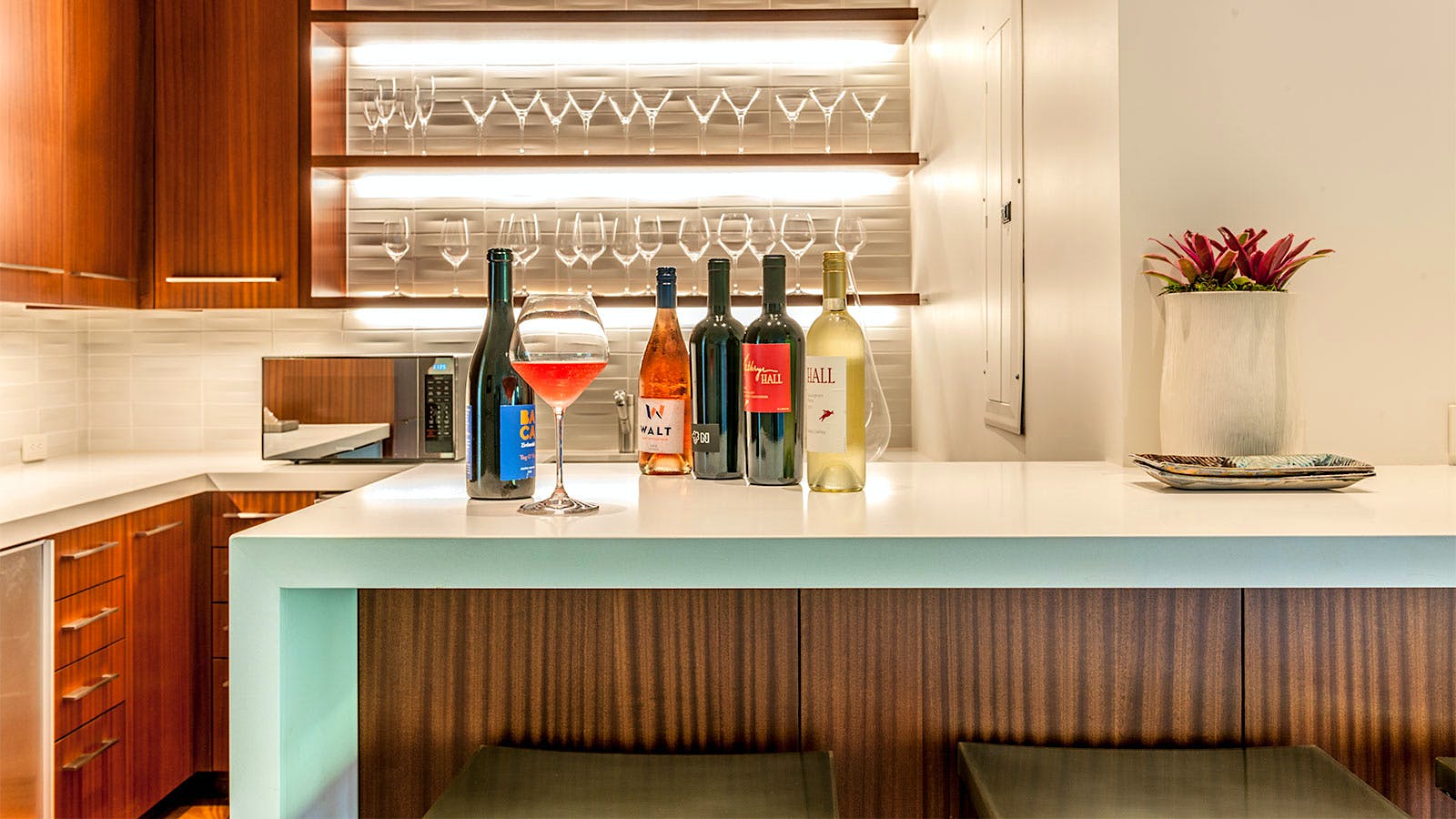 The Halls store about 20 cases in this kitchen-adjacent wine pantry, where N’Finity Pro HDX coolers are stocked with tropics-appropriate Champagne, Sauvignon Blanc, Chardonnay, rosés and Pinot Noir. Kathryn keeps a few bottles of Cabernet on hand too: "Sometimes, even though it's warm out, I just want to have a nice, wonderful Cabernet." (Tony Novak-Clifford) 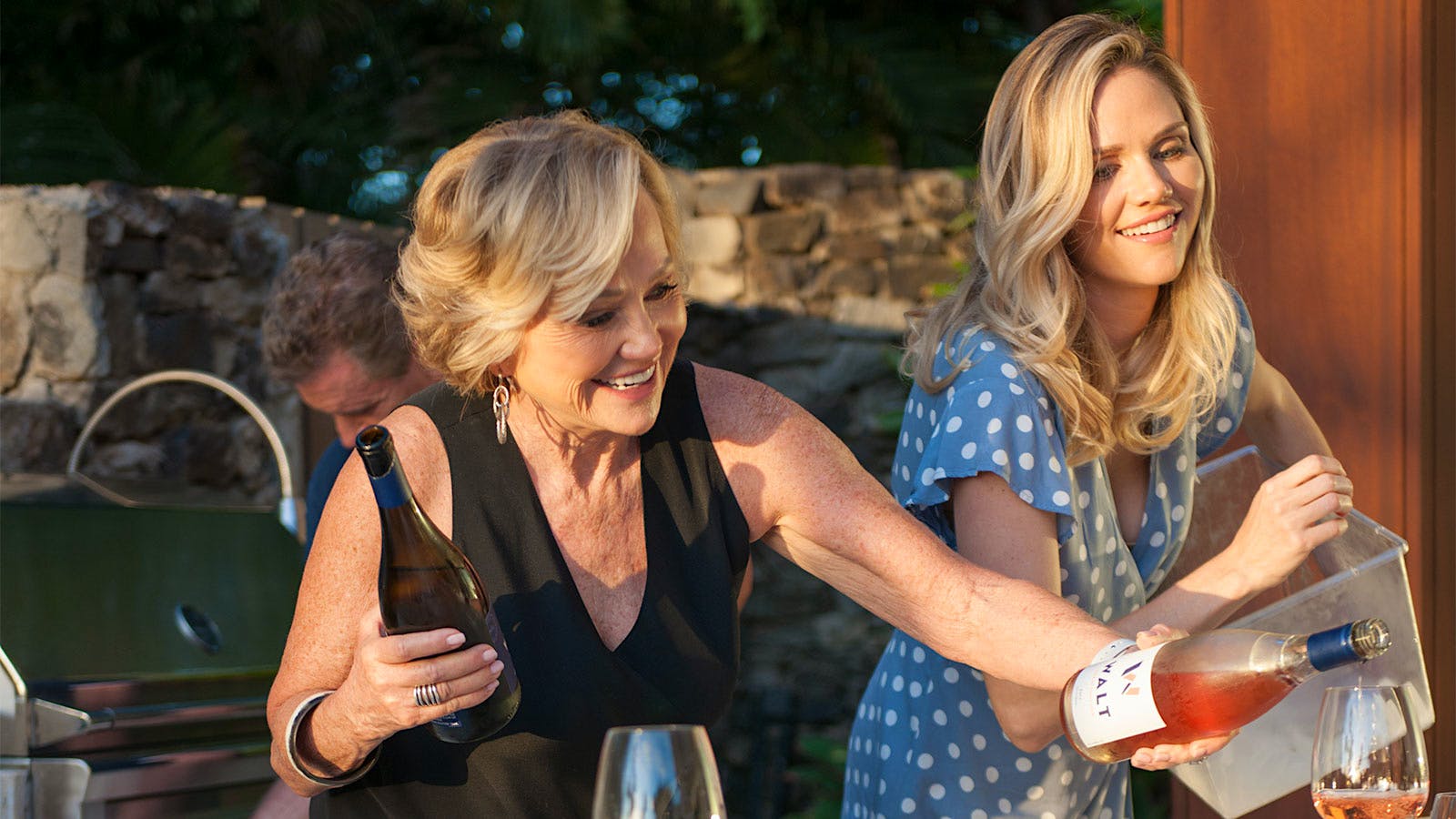 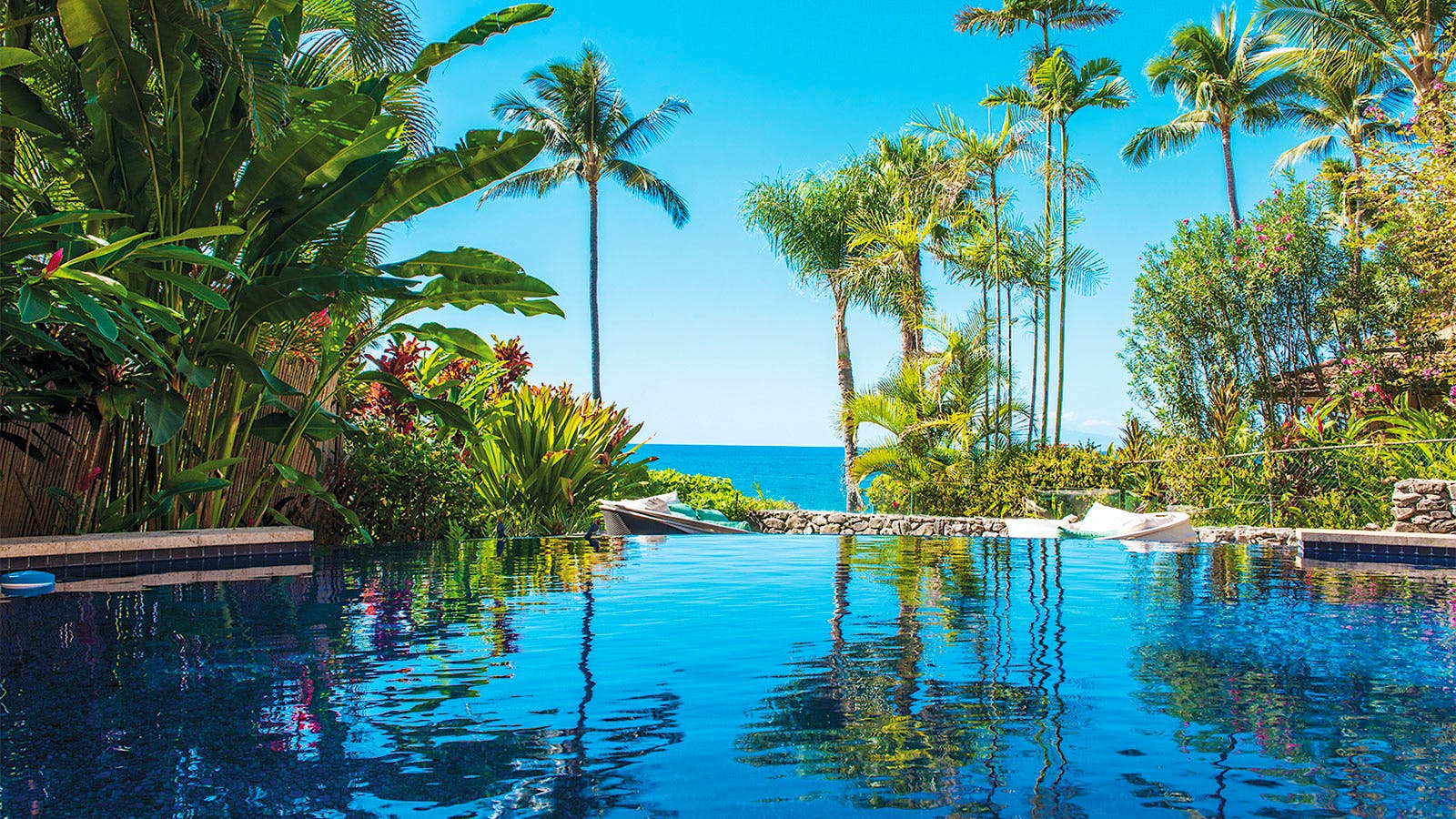 The backyard infinity pool faces the Pacific Ocean. "It's just all so incredibly peaceful," Kathryn reflects. "Everything is soft in Hawaii: The breeze is soft, the way the leaves move in the wind is graceful, the ocean where we are is soft and rolling." (Tony Novak-Clifford) 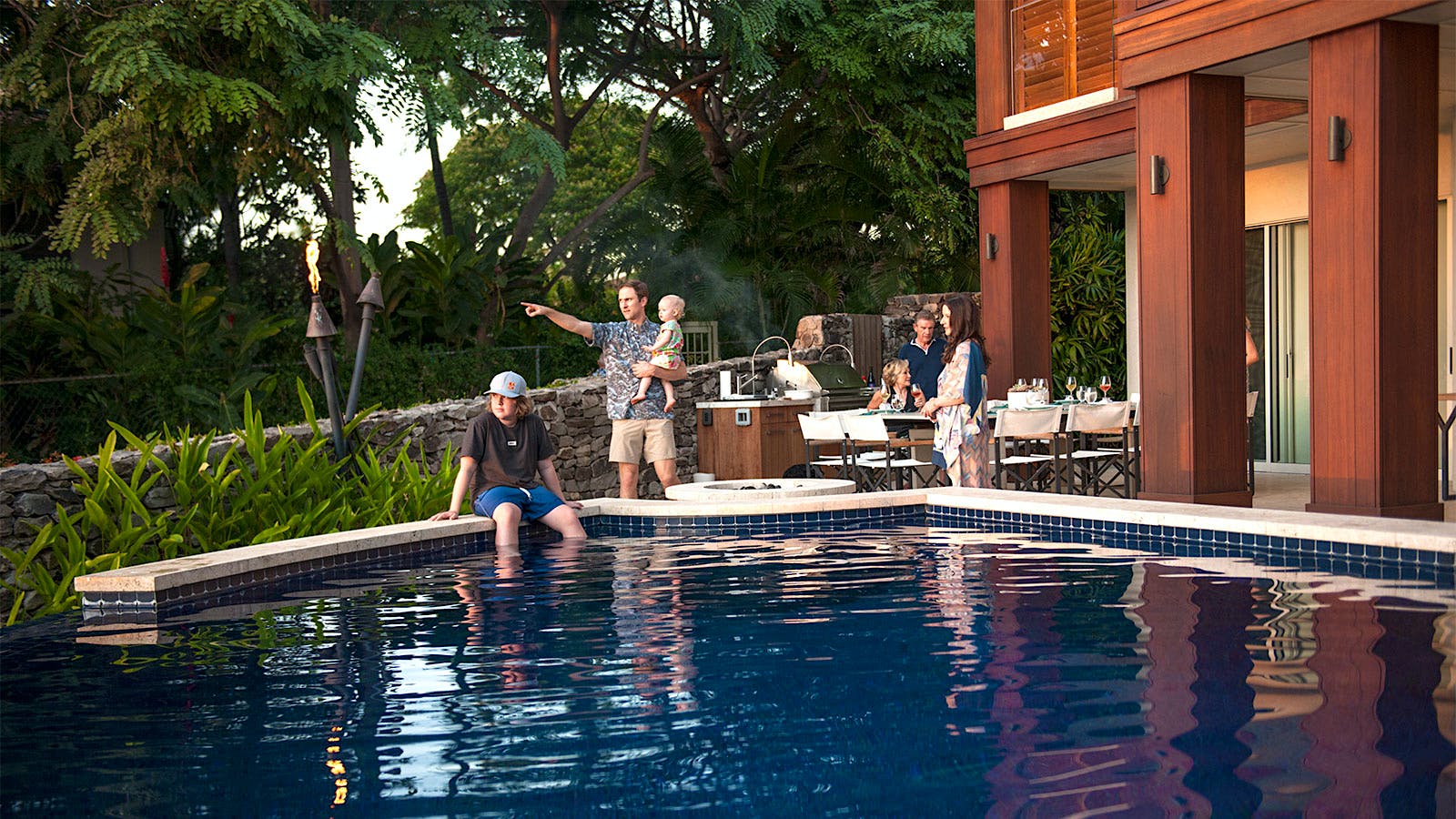 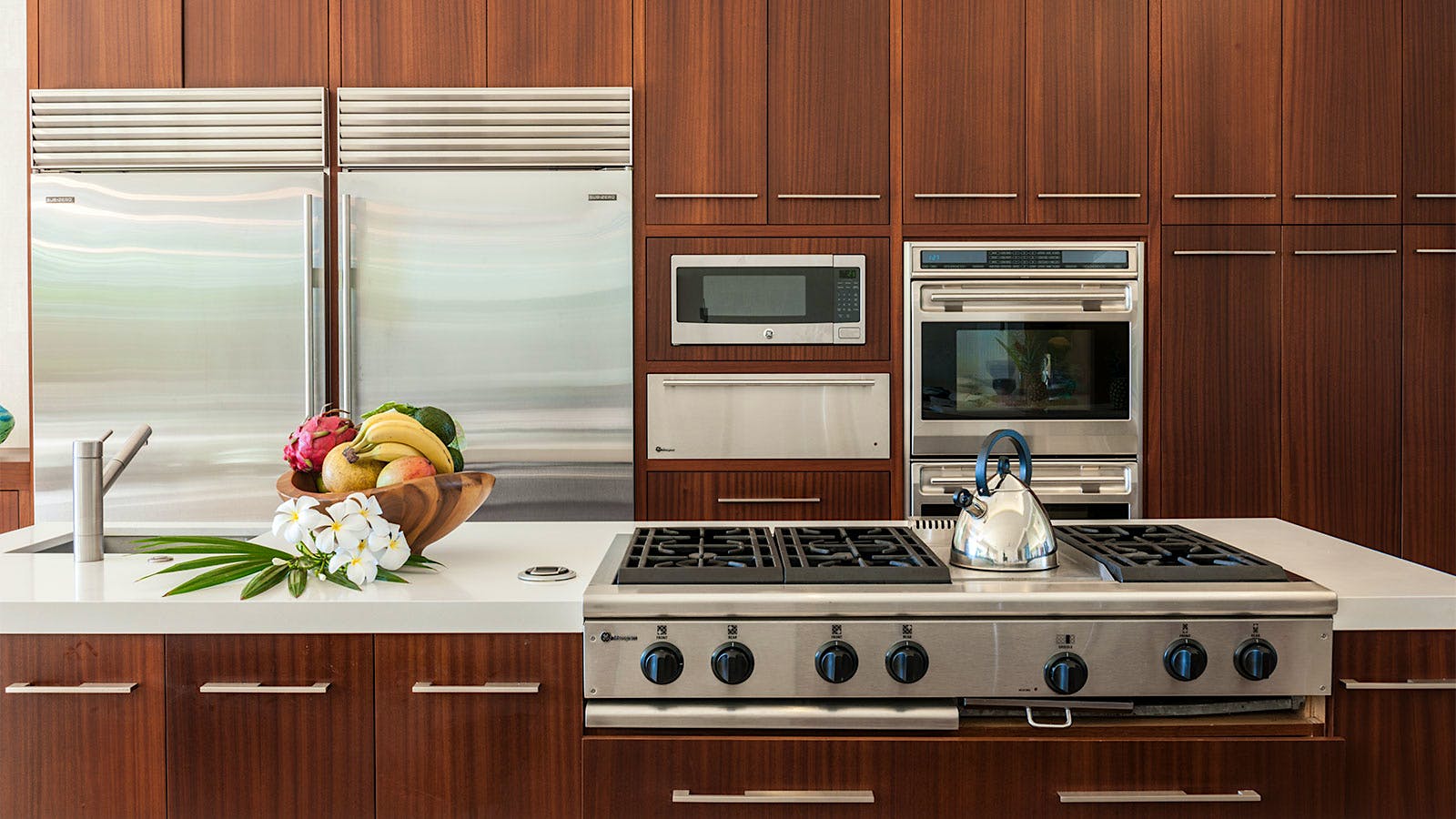 Teak cabinetry adds richness to the orderly lines of the indoor kitchen, balancing the gleam of the GE Monogram range and warming drawer, Sub-Zero fridge and Wolf microwave. (Tony Novak-Clifford) 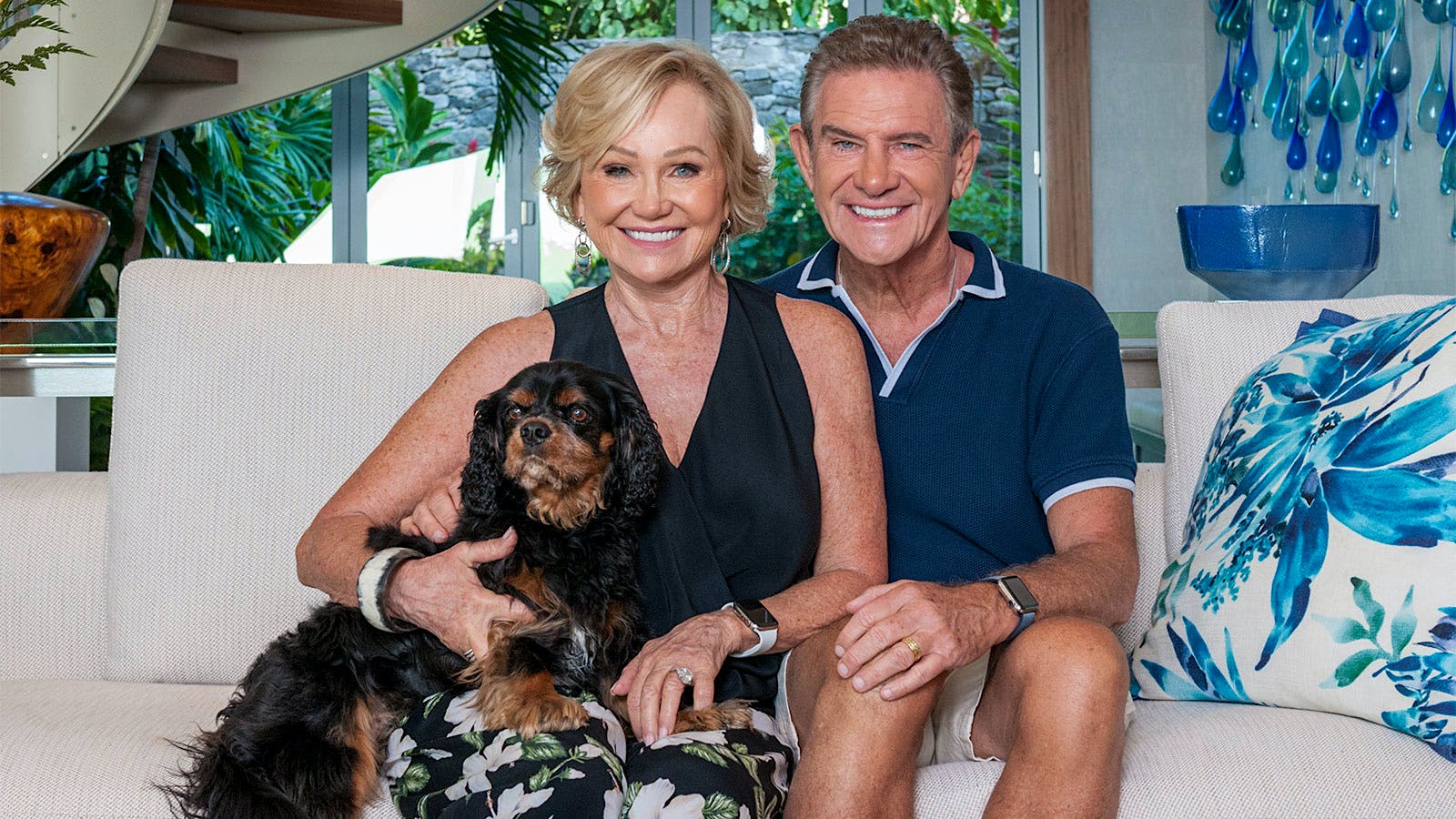 Kathryn Walt Hall and Craig Hall designed their home with an eye toward openness, natural tones and art that brings the indoors in. (Photo by Tony Novak-Clifford)
Design

The Fine Art of Shopping Carte

Form and Function in Russia

Shape of Things to Come

A New Historic Home in Philly