After several years living in Italy and drinking countless aperitivi, I’ve been surprised to learn this: Many Italians who see themselves as smart and sophisticated won’t drink Prosecco.

Among foodies, enophiles and those who work in the trade, the ultrapopular sparkling wine from northeastern Italy is often looked down upon as swill for the masses. In this world, traditional-method spumante from Franciacorta or Trento are acceptable in good company. But for an astonishing number of Italian producers, the only bubbles that pass their lips come from Champagne.

It’s snobbism to be sure. Yet it’s also understandable given the immense divergence in quality among wines labeled as Prosecco.

There is plenty of delicious, well-made Prosecco, like the Prosecco Superiore DOCG from the gorgeous hills of Conegliano and Valdobbiadene, which this summer joined the elite ranks of UNESCO World Heritage Site vineyard areas. But there are also rivers of mediocre, commodity-grade stuff (sometimes served from kegs in bars that give it cheeky names like “Prozacco”) from the vast flatlands of the Veneto and neighboring Friuli/Venezia-Giulia. The problem is, without careful reading of the label, it’s all just Prosecco.

I’ll admit, Prosecco-phobia has rubbed off on me. If I am hosting Americans, Brits or even French, I don’t hesitate to pour Prosecco. But if my guests are Italian wine lovers, I’ll likely serve something else.

Personally, I enjoy seeking out good Prosecco. So, I was thrilled to get an invitation to the 100th anniversary celebration of Nino Franco winery from one of the godfathers of quality Valdobbiadene Prosecco: Primo Franco.

“We’ll be tasting Prosecco from my birth year—made by Father and Grandfather!” promised Franco when I ran into him a few months ago.

Franco is an elegant and energetic man of the world, who has spent his adult life trying to bring “dignity to Prosecco.” (Read about my earlier visit with him.) But his birth year is 1947. I didn’t know what to think about 72-year-old Prosecco. Few wines last anywhere near that long. Most Prosecco, I imagine, gets drunk within 72 weeks! Isn’t old vintage Prosecco an oxymoron?

On Halloween, I gathered with about 50 others—wine writers and bloggers, distributors, importers and Italian winemakers—to taste the ’47 and other decades-old wines that told the story of the Franco winery. 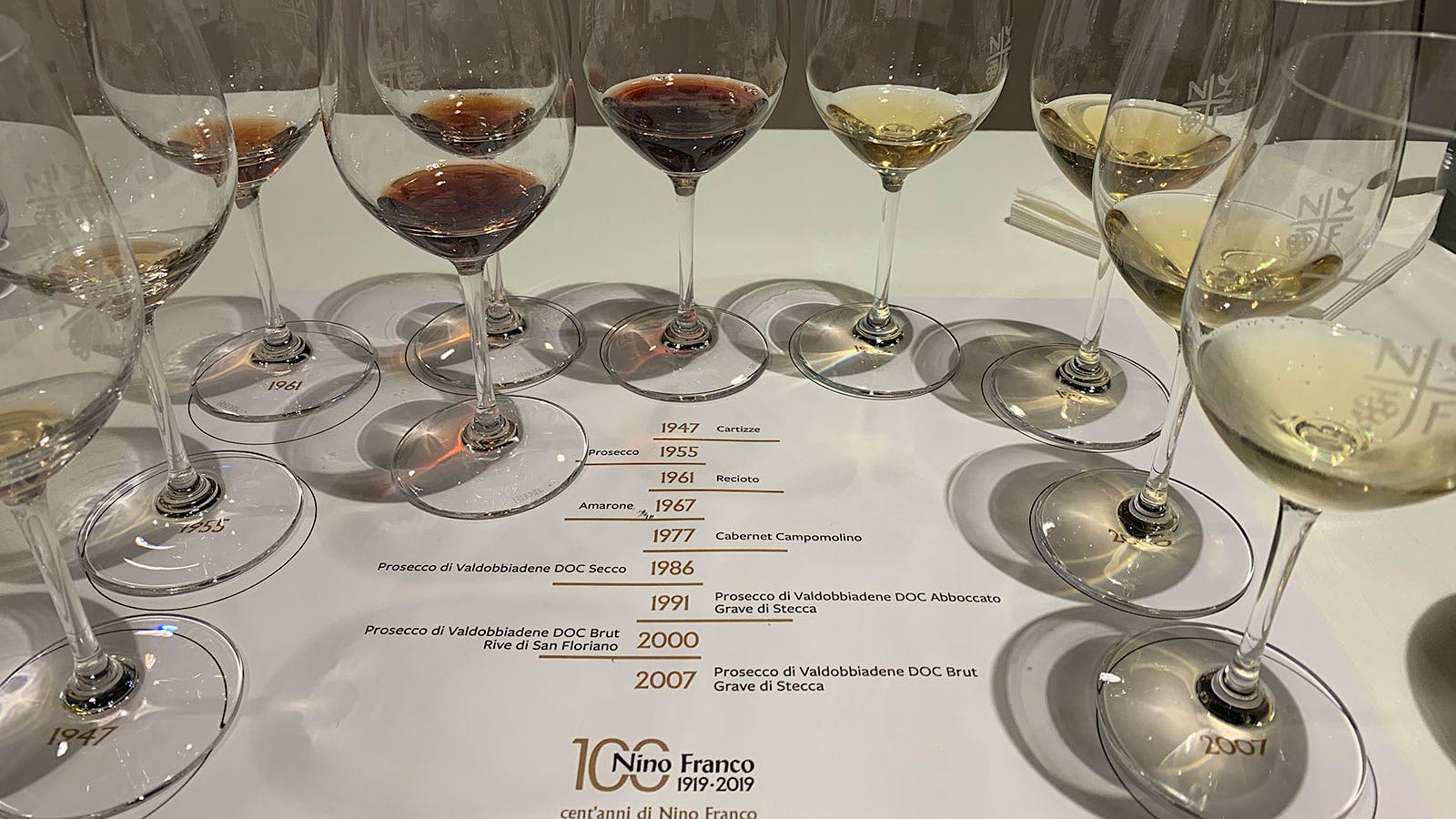 “This is more of an emotional tasting than a sensorial tasting,” explained Franco as a team of servers poured nine wines spanning 60 years, from 1947 to 2007. “The main goal is to make you all cry.”

The Francos’ 100-year history in Valdobbiadene began after Franco’s grandfather Antonio returned home from World War I’s eastern front to find the family home destroyed. In 1919, he bought a home with a winery and launched a négociant business, buying grapes as well as wines.

With the 1983 vintage, after the death of his father, Nino, Primo took over, focusing on white wines from local grapes. Over time, he discovered small stashes of old bottles hidden on top of old fermentation tanks and in an old bomb shelter.

One of those was the 1947 Cartizze Prosecco, from an esteemed hillside site in Valdobbiadene, a deep golden-orange color when served. Its bubbles had long dissipated, and it was oxidized from its very extended bottle aging. But behind a slight bit of sweetness on the tongue remained a refreshing tang of acidity. Incredibly, the wine was still alive.

The same was true of a dry (meaning only slightly sweet in sparkling-wine parlance) 1955 Prosecco that Franco had discovered in 1983 after his father’s death and that inspired his Primo Franco bottling.

“We had seven or eight bottles left of each,” said Franco of the two vintages. “Now they are finished.”

The wines were now more like Sherry than Prosecco, but you could smell the flowers and dried fruit and feel the layers of time.

No one in the room spat.

Three red wines bottled by Franco’s father came next, including a 1967 Amarone sold to Nino in demijohns by a young, soon-to-become legendary Giuseppe Quintarelli.

But the focus of the tasting was on white wines made locally by three generations of Francos from Glera—the variety that dominates Prosecco—including two still Proseccos, from 1986 and 1991.

Today, Franco and his daughter Silvia produce about 80,000 cases of sparkling wine per year, though much of his effort focuses on small quantities (about 500 to 1,000 cases) of three single-vineyard wines from plots totaling about 12 acres. All the wines undergo secondary fermentation in steel autoclaves, in a finely tuned take on the charmat method, and age for a few months up to five years in bottle before release.

The tasting finished with bottlings from two single vineyards: the debut 2000 vintage of his Prosecco di Valdobbiadene Brut Riva di San Floriano, and the first sparkler made from his clos vineyard Grave di Stecca in 2009. (Since 2009, Franco has labeled the distinctive wine simply as Spumante Brut to avoid clashes with appellation officials who thought it bore too little resemblance to Prosecco).

The wines were very different—the first was lean and long in the mouth and the second creamy—but both defied the image of easy drink-don’t-think Prosecco.

Early the next morning, I rode with Franco as he drove outside the town of Valdobbiadene to his Col del Vent vineyard, acquired in 2015. A plateau of clay soils, planted to varied subvarieties and clones of Glera, with vines up to a century old, it is the basis of his newest cuvée, Brut Valdobbiadene Prosecco Superiore Nodi. (The 2015 vintage, priced at $49, scored 89 points.)

“I’ve learned that even if Glera is a simple grape,” Franco said, “if you put your mind to quality you can make beautiful things.”