With a new decade out of the gates and a desperate world's hopes for the "Boring '20s" already dashed, it's time to wonder how wine will get in on all the action! As an old (space) empire fades, a new (legal-drinking-age) generation rises. Whither wine in these interesting times?

First, let's take a look back at how clear our crystal ball was for 2019. If anything, our outlandish predictions turned out to be utterly naïve in the face of the take-no-prisoners timeline we're riding. Benevolent emoji overlords Unicode create a #WineBeerEmoji, guessed we? How about, we're gonna need another decade or so to even get the #WhiteWine one? Meghan Markle and Prince Harry pick a wine name for their expected Royal Baby? How about, Meghan and Harry and the baby up and quit the whole family altogether?? LeBron James becomes an Unfiltered sports columnist? How about LeBron James works on his day job getting to the sports playoffs first?!? No, the Royal Wine Ruminations of 2019 centered on House Lannister, the sport we followed was Communist marathons and the emoji we got and deserved was a toilet plunger.

Can we prognosticate better in 2020? Almost certainly not—you can take that prediction to the bank, at least. But if you care to hold us to our fake-news fever dreams, get the Unfiltered newsletter delivered straight to your inbox on alternating Fridays—all the latest scoop on drinks in sports, movies, music, politics, art, crime and more!

Winemakers are still reeling from the ever-fickle tastes of the Millennials—flavors of kombucha, yeast, petrichor and even Carignan have been in demand in wine as the youths flocked to bar stools in Brooklyn’s hippest natural wine spots. In 2018, comedian-vintner Eric Wareheim obliged with bizarro versions of Beaujolais Nouveau and Champagne, and last year, indie rocker Jenny Lewis bestowed "punk rock" cred on natural wine.

Demands will rise for weirder flavors this year, as a new, even-more-precious-slash-precocious generation joins the wine fray. And so, in a struggle to keep up with the youths’ ever-changing tastes, winemakers will reluctantly turn to fostering "natural" flavors of TCA, brettanomyces and mercaptan in an attempt to capture the mix of wet dog and rotten egg flavors the kids crave. Not only will flavors have to change, so too will tasting notes, published to the official Wine Spectator TikTok. Cheers to whoever crafts that just-so pour with hints of Blue Bottle cappuccino, velvety avo-smash mouthfeel, a frisson of overdue student-loan payment and a long, Insta-famous finish.

Winemaker and importer Charles Bieler valiantly tried to recreate his 1999 #RoséRoadTrip in a pink 1966 Cadillac convertible in 2019, bringing cases of rosé and a quick thirst-trap backdrop to cities around the country. It ended in flames. But another innovator, Elon Musk—ever undaunted by critics who say he never fails to let failure follow failure—will hit the road anew in 2020 in another eye-catching vehicle, to get the word out about another of-the-moment category of wine. 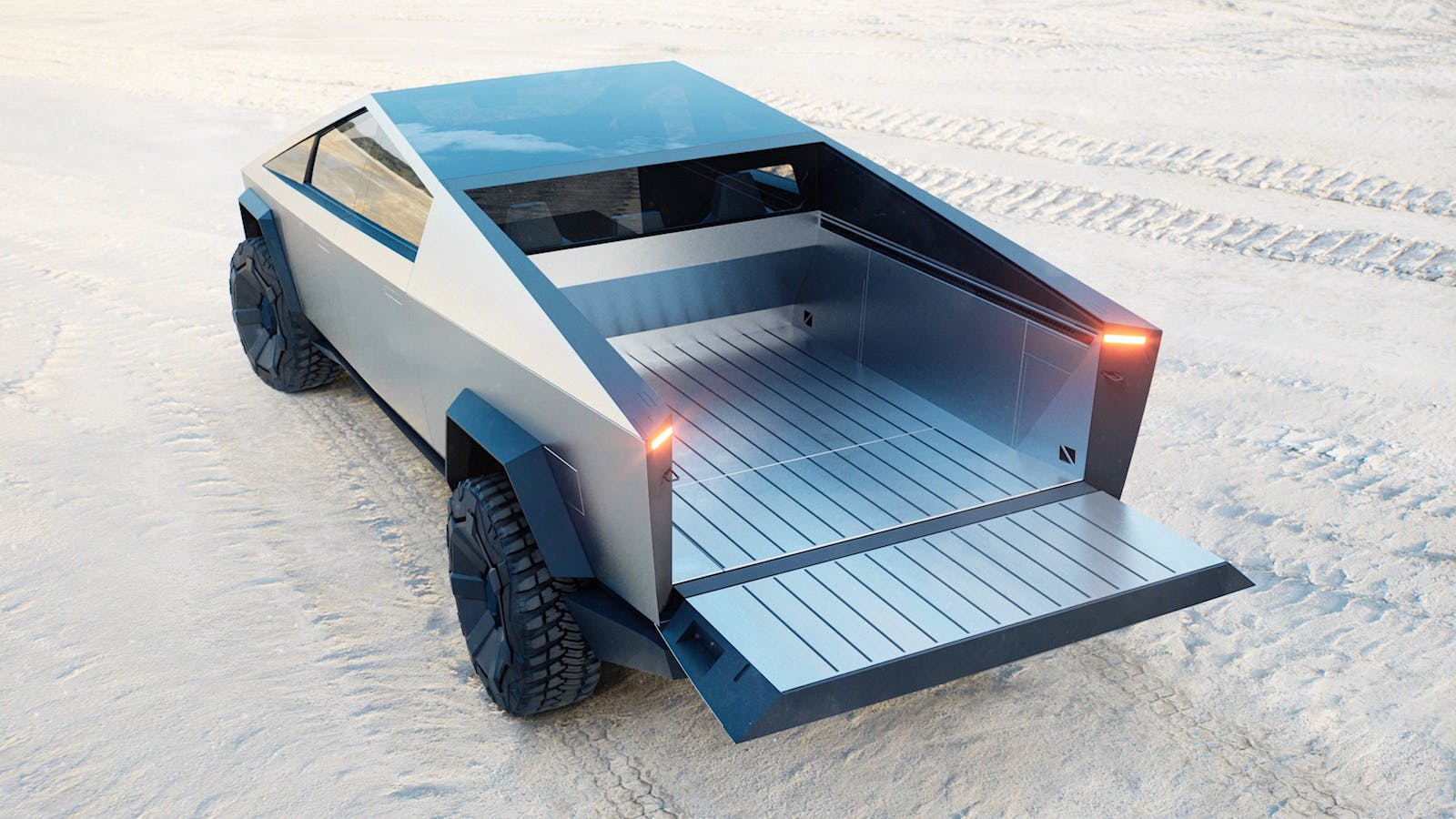 Musk will set off from Palo Alto on his #TetraPakRoadTrip in a modified version of the new concept kinda-car, the Tesla Cybertruck. Built with an "exoskeleton" of high-impact-resistant ultra-hard triple-X-reinforced crumple-proofed shiny cardboard, the Tetratruck will have the mobility and roadworthiness of a box of wine, as well as the appearance. Unfortunately the #TetraPakRoadTrip will also be doomed to an early end when the Tetratruck is destroyed in a freak outbreak of French truck-tipping, bulk-wine-furious vandals.

Wine had a big presence on the small screen in 2019, and winemakers, in turn, felt fans should be able to drink a glass of their favorite characters' favorite fictional pours to fortify themselves for a grueling eight-episode bingewatch. A Bordeaux vigneron made a few silver stags off selling a Game of Thrones–based Dornish wine—Merlot grown on St.-Emilion's Dornesque sandy soils in a warm vintage—until HBO slew his label. And a few enterprising brokers and winemakers partnered up to make Château Picard, fictional home estate of Star Trek's Captain Picard, a reality, which was both easier and harder owing to the actual terrestrial preexistence of a Château Picard. In 2020, winemakers are already eyeing upcoming series that will pair with their real pours. 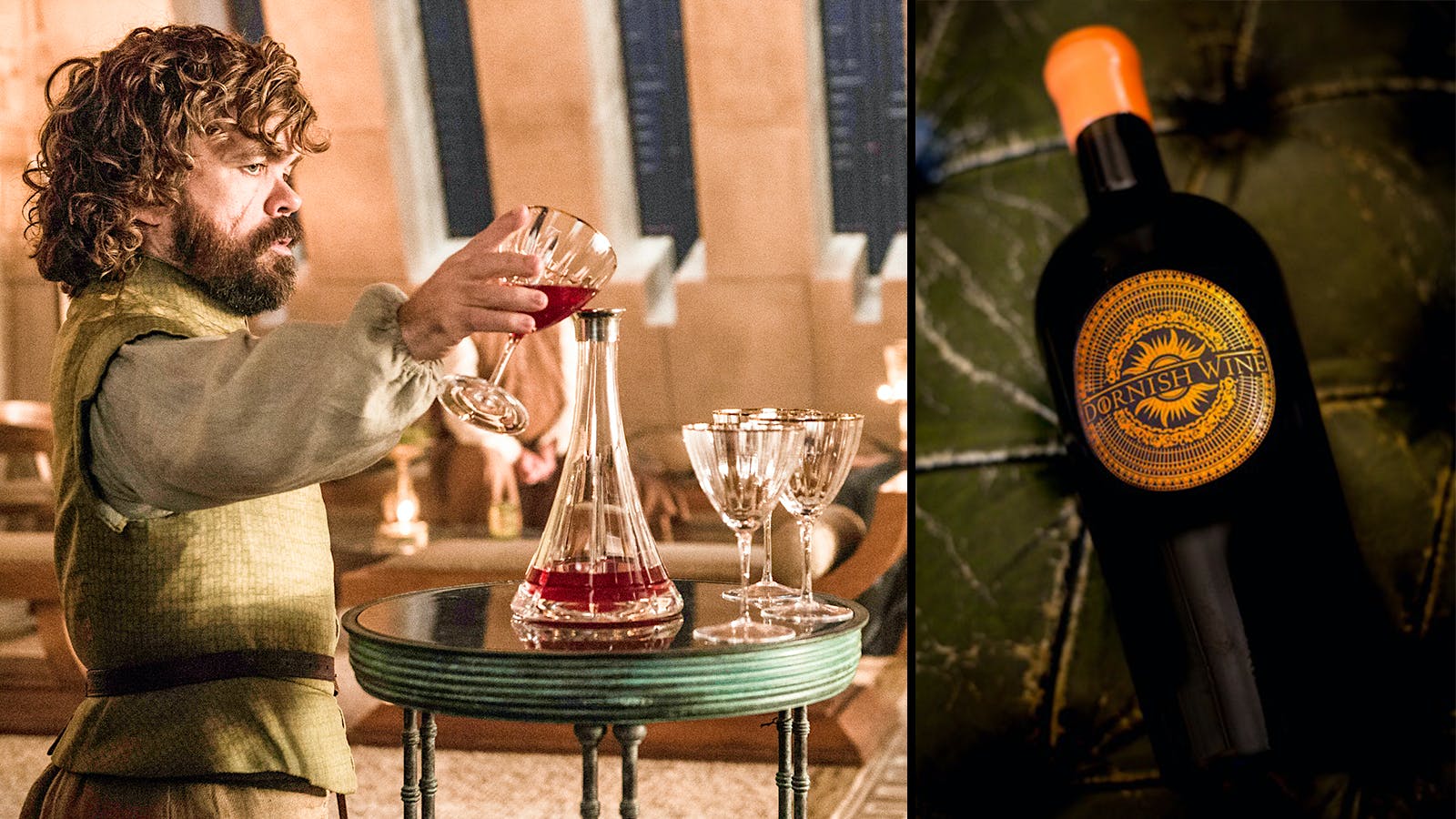 For the wine is dark, and full of tannins. Tyrion Lannister (left) and the St.-Emilion Dornish cuvée (HBO/Photofest / Courtesy of Vignobles Bardet)

Ryan Murphy procedural thriller 9-1-1 spins off in 2020 with 9-1-1: Lone Star, in which the series' brave first responders must grapple with emergencies in—you guessed it—the fictional Lone Star Vineyard. While harrowing scenes of police confronting grape-yield thieves, workers ducking the blasts of AWOL optical sorters and fraternity Brojolais Nouvbreau–themed parties gone awry may sound like bad publicity for a real-life vineyard, expect a 9-1-1 cuvée from the real Lone Star Vineyard. (It's in Oregon.)

Premiering in February and hosted by Will Arnett, Lego Masters is a reality competition show with the straightforward premise that whichever team creates the best Lego representation of a given challenge prompt wins. In bricks as in Brix, precision in detail matters, and the teams will face a tough task in assembling a structure of 48 percent Cabernet Sauvignon Legos, 40 percent Merlot Legos and 12 percent Petit Verdot Legos: the Châto Palmer Alter L'Ego. Not to be outdone by a fellow first-growth, Domaines Barons de Rothschild will successfully complete the Pendant of Life in time to get prime placement for its Légende of the Hidden Temple Rouge atop the Shrine of the Silver Monkey in the upcoming reboot of the beloved children's TV classic.

Other time-tested wines will also decide that co-branding bottlings with rebooted shows of similar vintage and pedigree is the way to go—hence the new Saved by Korbel and The Biggest Loosen. "Harlanimaniacs" is unrelated to the cartoon revival, however; that's just the sad self-bestowed moniker of the chummy collector clique soon to be swindled by 2020's Rudy Kurniawan.

Space wine got all the hype in 2019 with the 50th anniversary of the moon landing—Buzz Aldrin’s wine-filled chalice revisited—and NASA’s first spacewine mission aboard the ISS (yep, there are 12 bottles of French wine orbiting around Earth right now). Even Anheuser-Busch made some ambitious moves in space with plans to brew the first red planet Budweiser. And this, we predict, is just the beginning of wine and beer exploration outside the grands crus of Earth. 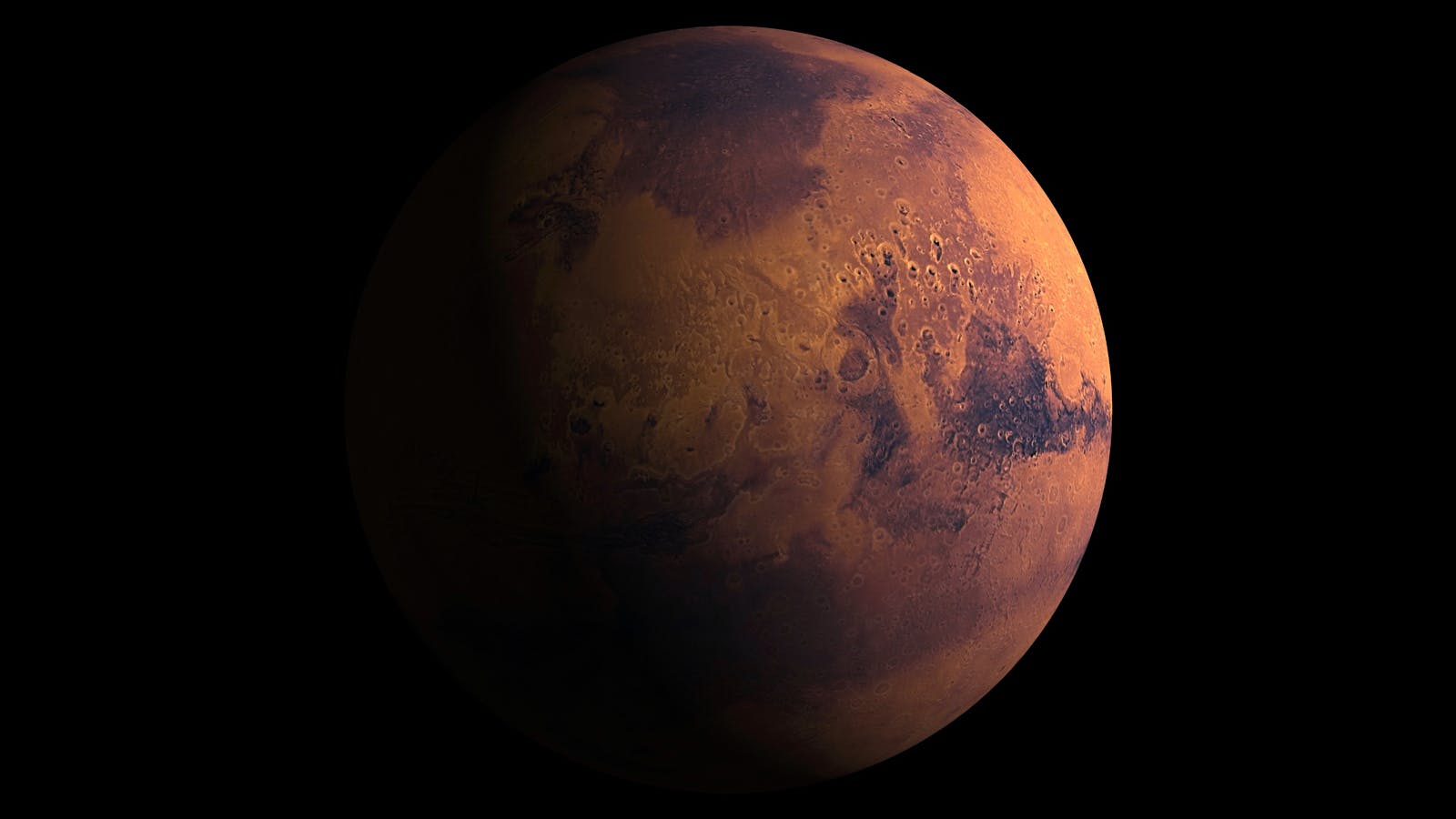 In 2020, expect a mission to Mars from the red realm of wine to the red realm of space (having already conquered the Red realm of China). Château Lafite Rothschild is finalizing plans to scoop up some prime Martian extraterroir, and a fully equipped Château Marsgaux rover is expected to lend a helping hand in planting the first vineyard. As tariffs impact French wine, we expect more Bordeaux houses to get onboard the journey to Mars—if not to spawn vineyards, then to discover signs of futures-buyer life and establish a galactic loophole in earthbound export market.

Don’t rule out the Russians either. They’ve been sippin' in space since at least the '70s and if they don’t release a red planet vodka this year—now that we know the grain can thrive in the harshest, most radioactive post-Soviet environments—expect them to at least come out with a cosmonaut cuvée for enjoyment down here and health reasons up there.

This year, famed winemaker Aubert de Villaine of Domaine de la Romanée-Conti made a rare onscreen cameo in L’Âme du Vin (The Soul of Wine), and agents are abuzz about the vigneron's thespian talents. De Villaine's burgeoning third-act career will get him into some pretty big movies in 2020—it’s not surprising to see actors, entertainers and athletes take their talents to the vineyards, so why not the other way around? (Château Miraval's Marc Perrin hasn’t made a film yet, but with his connections it wouldn’t be surprising to see him join his French confrère on the big screen as well.) 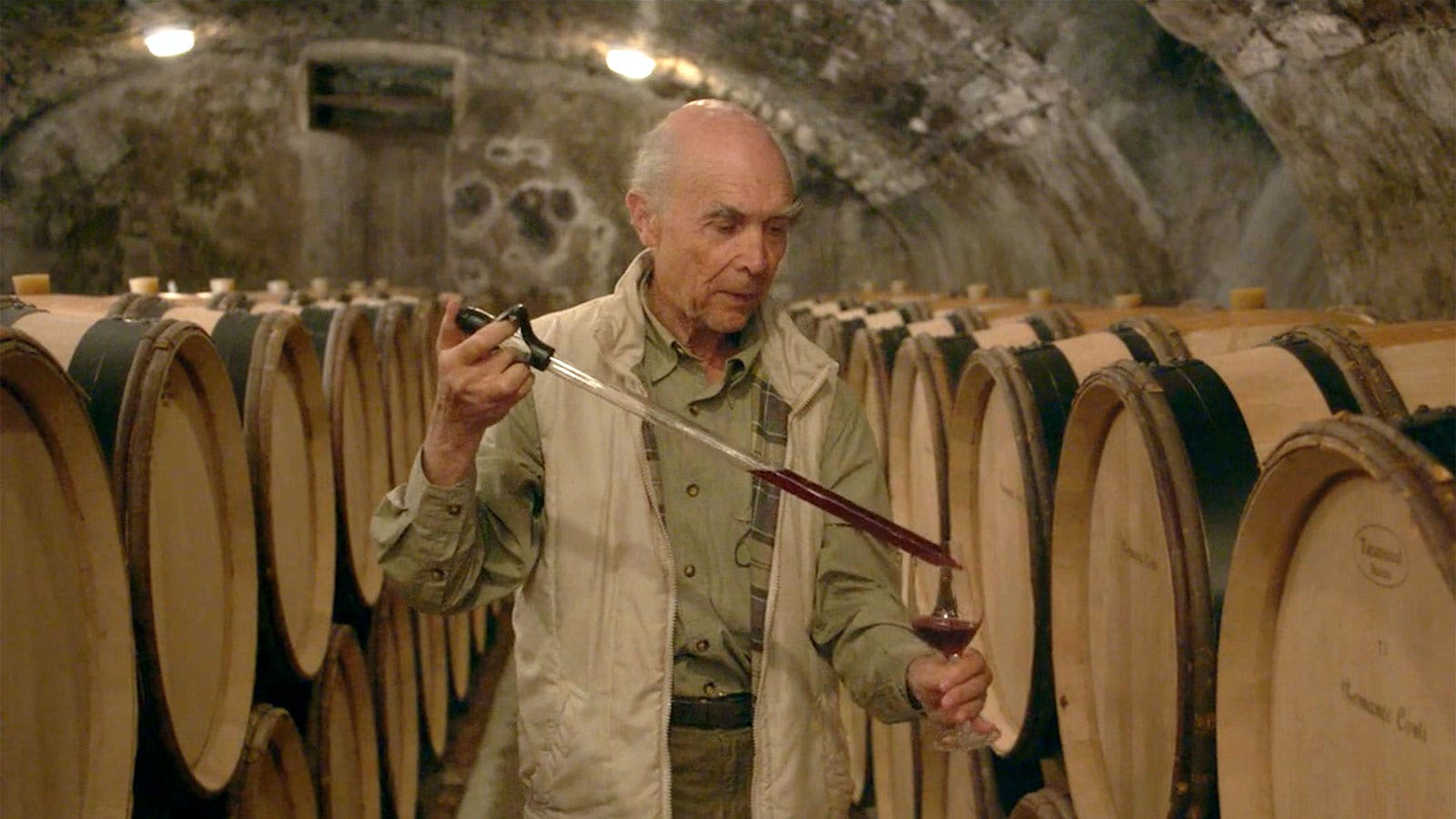 While everyone knows them for Burgundy, DRC is deeply committed to all warm autumn tones. (L’Âme du Vin (The Soul of Wine))

Of course, only big-budget production studios can afford an A-list winemaker whose output can bring in $500,000, so expect to see de Villaine trading Pinot for Vesper Martinis in the new Bond thriller No Time to Die, hopping off draft horses and into F-35 cockpits in Top Gun: Maverick and ditching his tractor for a charger in Fast & Furious 9 (the rare film franchise as long-lived as La Tâche) this year. A quick cameo in Bad Boys for Life wouldn’t be out of the question either, as long as de Villaine makes it back from the mean streets of Miami in time for harvest.

Attack of the Clones: 'Star Wars' Makes a Show of (the) Force With New Wines

We want to know what Force Ghost reached out to make this happen. Disney will soon announce two wines as part of the 2019 vintage of new Star Wars label, the red blend "Première Commande" (translation: "First Order") and the Sauvignon Blanc "Sabre Laser" (translation: well, you know). While the winemakers can't yet tell us which vineyards the grapes were sourced from, we've been assured that the clones used were "definitely of the grape kind and not the Kamino kind." The red is (what else?) a gripping, powerful Meritage blend with, according to the winemaker notes "enough shocking power to push someone into a reactor core. Strength from passion, power from strength—watch out." Of the Sauvignon Blanc: "Laserlike is no exaggeration: bright bursts of color punctuated by an almost alien harmony."