Four weeks after the United States slapped a punishing 25 percent tariff on many European wines in retaliation for subsidies to airplane manufacturer Airbus, wine professionals on both sides of the Atlantic are grappling with evaporating profits as they navigate an uncertain business environment.

"We find it brutal and unjust," said Ronan Laborde, owner of Château Clinet and president of the Union des Grand Crus, a Bordeaux trade group. "To impose a tax with 15 days notice, for wine which uses sea transport, there was a lot of stress and confusion. And it doesn't touch all wines. It's incomprehensible."

On Oct. 2, the World Trade Organization (WTO) gave the U.S. the green light to impose duties on $7.5 billion worth of European goods after the E.U. was found guilty of unfair subsidies to Airbus. The following day, President Donald Trump's administration announced tariffs on a wide range of European products, including wine, cheese, olive oil, single-malt Scotch and cashmere sweaters, to go into effect on Oct. 18.

The tariffs covered all wines from France, Spain, Germany and the U.K., except for sparkling wines, wines over 14 percent alcohol and large-format bottles. Containers of wine were on the ocean when the tariffs were announced, and when they arrived after the 18th, they effectively became 25 percent more expensive the moment they touched U.S. soil.

"It's like buying at a 1.12 euro and receiving when it's gone to a 1.45 euro," said Barbara Hermann, wine director at Binny's Beverage Depot, a chain of Midwestern stores.

American importer Michael Corso, CEO of Michael Corso Selections, told Wine Spectator, "In 10 days we paid $41,000 out of our pockets. Just like that. Who was punished? Airbus? We were given no time to plan for it and we have large orders arriving."

The uneven application of the tariffs added to the confusion. "Obviously this measure opens the door to the replacement of French wines by the Italian wines, which are already leaders, as well as by the Australians and the South Americans," said négociant Jean-Pierre Rousseau, managing director of Diva. "It is a very hard blow to our industry."

France's Finance Minister Bruno Le Maire has said that French winegrowers could lose $335 million in exports due to U.S. countermeasures in the Airbus dispute.

"Our customers' first reaction was to freeze their import of French wines for the moment and concentrate on wines from other countries, including Italy," said Thierry Seve, director of exports at Calmel & Joseph in the Languedoc.

That wine should become collateral damage in a trade spat concerning aviation is distressing but not altogether surprising. "French wine is a symbol of France," said Rod Hull, commercial director at Bordeaux négociant Europvin. "It's a highly emotive product."

In Spain, the reaction has been measured. "In our almost 150 years of history, we have experienced that trade tariffs in general are never really helpful for anyone for the long term. Competition and an equal level playing field are key to develop healthy commercial relations," Miguel Torres Maczassek, CEO of Torres, told Wine Spectator.

Torres has exported wine to the U.S. for 75 years. "The U.S. continues to be a strategic market for us," said Torres. "Therefore, the trade tariffs on Spanish still wine are of course a major issue for us, and we hope that the responsible politicians and authorities soon come to an agreement on this point."

In Germany, Ernst Büscher, spokesperson for the German Wine Institute, told Wine Spectator, "The U.S.A. is the most important export market for German winegrowers. With export sales worth 70 million euros it accounts for nearly a quarter of the total German wine export revenue. In some wineries, especially from the Mosel region, the share of U.S. exports is much higher." Many German growers are sharing the cost of the tariff with their importers. "But this is no long-term solution," said Büscher. "Everybody is hoping that this period won't last too long."

The uncertainty in Europe is compounded by Brexit, slowing domestic consumption and a turbulent Chinese market. Political unrest in Hong Kong is impacting sales there. Many Chinese distributors have gone out of business.

"Orders from China are down by half compared to last year," said Eric Henaux, general director of the Bordeaux-based cooperative Tutiac, which exports to 40 countries. "Now we have President Trump's tariffs on our wines. We are concerned about bad conditions in these markets. Uncertainty is not good for any kind of business." 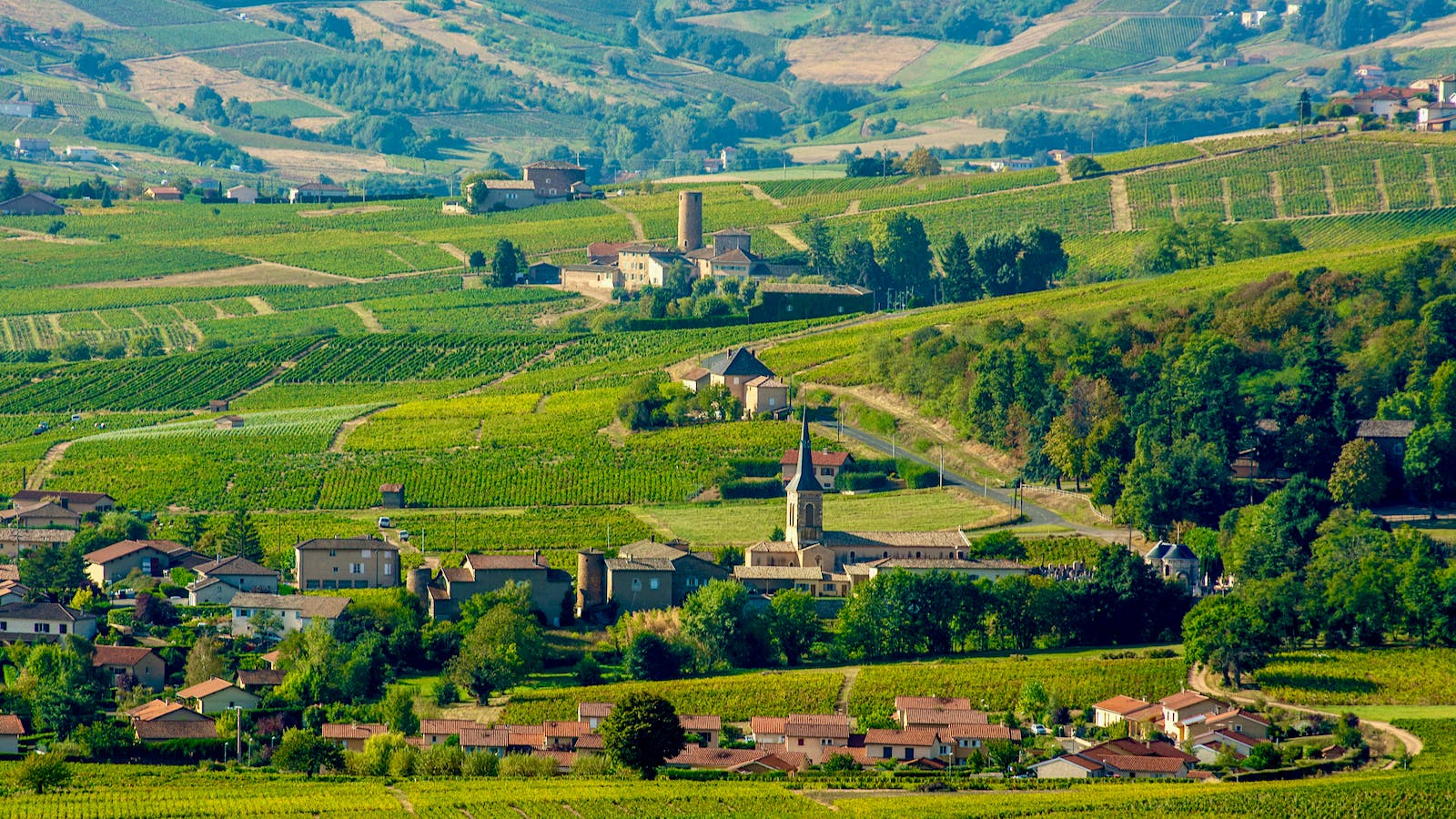 The timing could not be worse for the Beaujolais region. Tariffs were announced as producers were planning Beaujolais Nouveau sales. (Photo by Bernard Jaubert/Getty Images)

A variety of coping strategies

For Beaujolais, the timing couldn't have been worse, with Nouveau wines set to be shipped. "We're taken hostage by a situation that does not involve us," said Dominique Piron, president of the Beaujolais Wine Council.

Importers and distributors had to quickly decide if they were absorbing any or all of the tariff. Louis Latour cancelled their U.S. shipments. Georges Dubouef shipped, but raised their prices. Other producers shipped and held prices steady.

"But it's the wines that are shipped throughout the year that concern us," said Piron. "For the big players like Maison Jadot, they ship around 300,000 cases a year to the U.S. That's going to be complicated."

At Europvin, which also trades in premium wines outside Bordeaux, they hastily reserved air cargo space for a last-minute flight prior to Oct. 18. "Our Lustau Sherry isn't affected because it's over 14 percent. Alion and Pintia are over 14.5 percent, so they're fine, but Vega Sicilia Valbuena and Unico are on the cusp, so we shipped them by air," said Hull. "It cost a lot of money, but it was still less than the 25 percent tariff."

The company had also preemptively shipped some stock to their New Jersey warehouse in late summer. "We knew they were discussing tariffs," said Hull. "The threat was there."

As for the hundreds of containers arriving now, there are daily discussions between U.S. importers and their European suppliers on how to mitigate the loss. Some growers consider the U.S. market too important to lose and are willing to assume the entire 25 percent loss—at least for the next few months—rather than curtail their expansion in America.

"We consider this a short-term problem and we have a long-term strategy," said Sean Paterson, U.S. manager for Tutiac, which has an annual production of 40 million bottles. The company had three containers on the Atlantic when the tariffs hit, including their new brand, Lion and the Lily, poised for a wide launch in America. But there was no question of bringing the wine back. "We believe in the power of the brand, and the U.S. market is ideal for building a brand."

Faced with the possibility of losing a major retailer, they quickly decided to carry the loss themselves. "The U.S., strategically, has the most potential for the future," said Henaux."In the short term, we decided to take on a significant burden."

The Beaujolais wineries will fight to stay in the U.S. market too. "The U.S. is our top market, there's no question of losing it," said Piron. "Global competition is such that if you lose a market, you don't get it back."

In Bordeaux, agile négociants have quickly created price lists of stock they carry of wines over 14 percent, sending them to their customers in America.

But wine purchased en primeur creates a particularly complicated headache. What can be done about wines sold as futures which have been paid for but not yet shipped? Most of these wines have been presold to consumers. The margins for importers and retailers are razor thin.

"There will be no concerted way of dealing with futures sales and all combination of arrangements are possible," said Allan Sichel, managing director of négociant Maison Sichel and president of the Interprofessional Council for Bordeaux Wine. "I think most buyers are postponing the shipment of their wines until they have a better idea of what will happen in 2020.

At retailer Binny's, Hermann said, "For Bordeaux that I've ordered , mainly 2017s and 2018s plus normal stock, I'll take a 25 percent hit on everything that ships and falls into the tariff. I can't pass this on to our futures buyers, so we'll lose money on those purchases. And of course I'll have to figure this into the shelf pricing for the wines we will have in stock."

Going forward, the tariffs will have far-reaching consequences. "Since our sweet spot for selling Bordeaux is under $35 retail, I know it will have an effect on what I buy," said Hermann. "I don't think this will have much of an effect on sales of inexpensive wines, say the straight Bordeaux that went from $8.99 to $10.99 retail, but I believe it will have a bad effect on higher priced wines, mainly classified[-growths], because the retail increases will be that much more dramatic."

Fifteen associations from the American and European drinks industry have issued a joint statement, saying their "industries are collateral damage," and demanding an end to the tariffs. They estimate that 8,000 American jobs will be lost across the trade from importers and distributors to the hospitality sector.

"We've calculated that the tariffs will cost us $450,000 in one year and we're a small company," said Corso. "The whole pipeline is suffering."

One only has to look at exports of American Bourbon and rye to see the impact of the tariffs. In June 2018, the E.U. put a 25 percent tariff on American whiskey in retaliation for U.S. tariffs on imported aluminum and steel. U.S. whiskey exports plummeted 21 percent in one year. Brown-Forman, the maker of Jack Daniel's, lost $125 million. The Distilled Spirits Council predicted between 11,700 and 78,600 American jobs could be lost.

The trade dispute is poised to escalate next year. The U.S. has also been found guilty of illegal subsidies to Boeing. The amount the WTO will allow the E.U. to excise on American goods will be announced in early 2020.

"As a winery that exports to the U.S., we are of course very much on top of all developments," said Torres, "but it is important to stay calm and to be constructive in this very challenging scenario."

Our next two episodes feature American music trio and founders of Gaslighter Wine Co. The …