Many of the nation's top charity auctions enjoyed another record-breaking year in 2019. Wine lovers became local heroes as 13 auctions topped the $1 million mark in live bids, earning a spot on Wine Spectator's annual list of top charity wine events. Those highest-earning events raised a combined $44.1 million in live bids for underprivileged children, health initiatives and art and cultural institutions across the country.

Wine-focused lots were central to the success of the highest earners, such as Naples Winter Wine Festival (NWWF), the No. 1 auction in the nation for a fifth straight year, which raised nearly $13.1 million in live-auction bids and nearly $16 million total. An auction lot of double magnums of Screaming Eagle's first eight vintages sold for $350,000, while an Adriatic cruise paired with four double magnums of Darioush Darius II Cabernet Sauvignon 2015 sold for $400,000.

NWWF benefited more than 45 non-profit organizations dedicated to improving the lives of children in Collier County, Fla., and auctiongoers were able to meet some of those kids. "Meet the Kids Day continues to be a highlight of the Naples Winter Wine Festival," NWWF director Barrett Farmer said. "This year's Fund a Need focused on Naples Children & Education Foundation's Children's Mental Health Initiative, and it was moving to witness how this topic was so deeply rooted in the community."

The Sonoma County Wine Auction also fetched one of the biggest wine lots of the year, offering a 378-bottle collection of Sonoma Cabernets and Bordeaux blends, which sold for $510,000.

AWW made noise in the Northwest, raising $1.6 million for Seattle Children's Hospital, thanks in part to its highest-selling lot ever: a 1928 Ford Roadster that went for $425,000. The Southwest Florida Wine & Food Fest, Destin Charity Auction and Portland, Ore.'s Classic Wines Auction were also among those supporting children's causes.

High Museum Atlanta Wine Auction, Sonoma County Wine Auction and Festival Napa Valley focused on the arts and community enrichment programs. "The funds we raise at our gala provide free and affordable access to world-class performances," president and CEO of Festival Napa Valley Rick Walker said. "They support our primary mission: to make the arts accessible to all."

WineaPawlooza focused on animal rescue, while Toast to Your Health directed its campaign to tackling cardiovascular disease. "WineaPawlooza 2019 was a milestone event for Jameson Animal Rescue Ranch," co-founder and CEO Monica Stevens said. "We launched our capital campaign that night and one of our supporters stood up and pledged $1 million to the building of our Ranch and Education Center in Carneros."

"The Triangle Wine Experience raised $2.3 million last year, allowing the Frankie Lemmon School [a preschool for kids with and without special needs] to serve 95 children for the 2020 school year and helping close the gap of financial need so that no child need be turned away from the school due to financial restrictions," TWE director Tiffany Langhi said.

This year is looking like another banner year, as newcomers such as Orlando Wine Festival & Auction take the stage and long-running auctions add innovative fundraising strategies. "Our focus in 2020 will be engaging with more wineries as we expand the opportunities for participation and engagement with wine lovers," said AWW executive director Jamie Peha. "We'll continue to focus on innovation in fundraising by bringing new experiences to bidders who prefer intimate settings … and utilizing technologies such as mobile bidding."

Whatever the cause, wine lovers across the country joined paddles and made a difference in 2019. "Their unending support has allowed us to break our fundraising record from year to year," said Festival Napa Valley's Walker. "We hope to do the same in 2020." 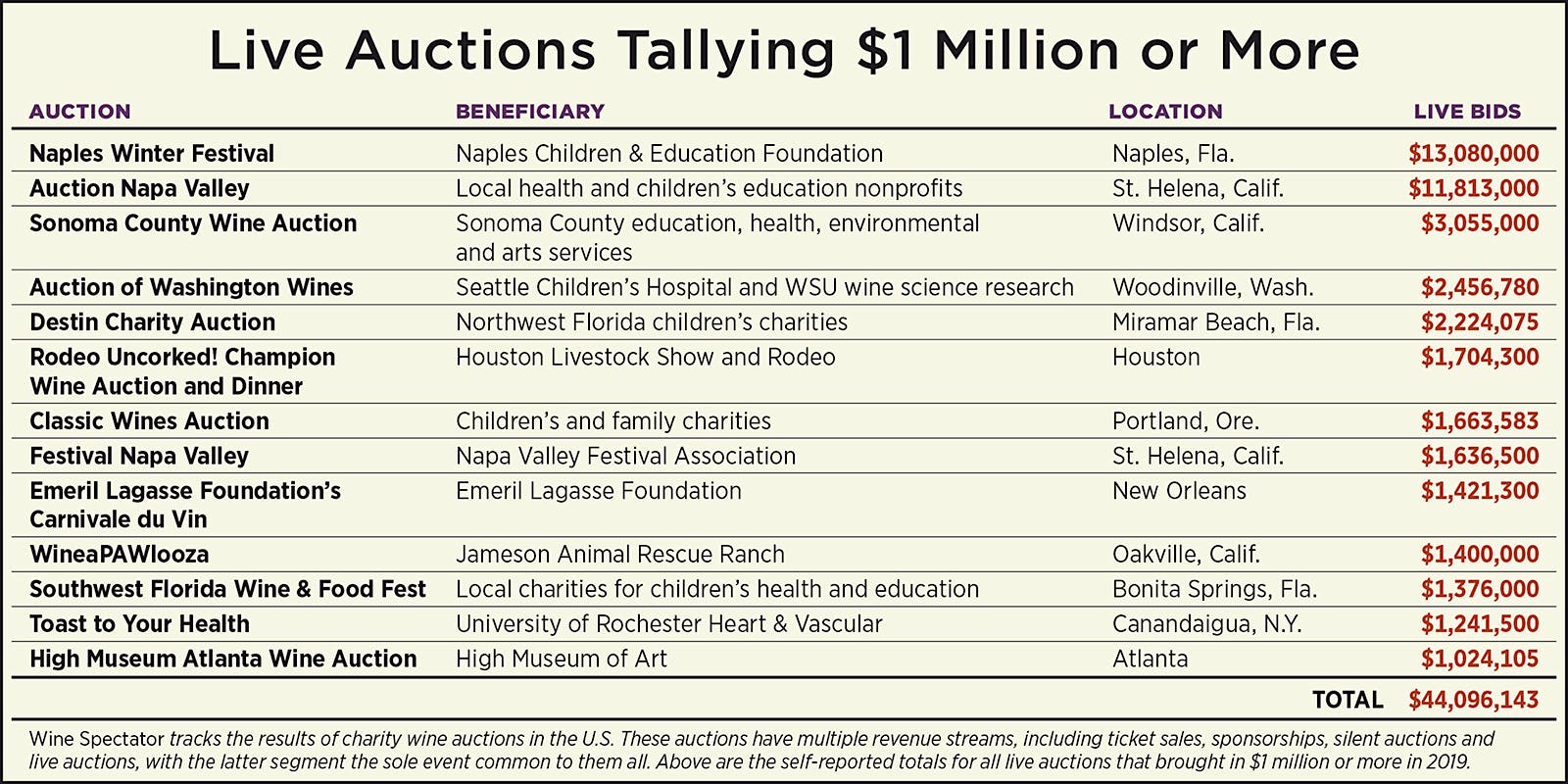 A larger version of this chart is available.