Josko Gravner wants to go deeper into his winemaking.

At 67, the tall, sturdy winemaker—who, over the past two decades, helped pioneer a new wave of “orange wines” and a return to making wine in amphorae—now plans to ferment his future wine in clay vessels buried outdoors.

It is a clear, late-summer evening after a storm in the hamlet of Oslavia (pop. 640), in northeastern Italy’s Collio region. On the hillside behind his family cellars, he nods to a set of amphorae—actually terracotta Georgian qvevri up to 2,500 liters apiece—laying on their sides in the grass.

“They are for my amphora garden,” Gravner explains. In 2020, he plans to plant 14 of the vessels in the layered soils known locally as ponca and start fermenting wines there. He is already convinced it will work.

“That’s the maximum,” Gravner says quietly, “to ferment with the universe.” 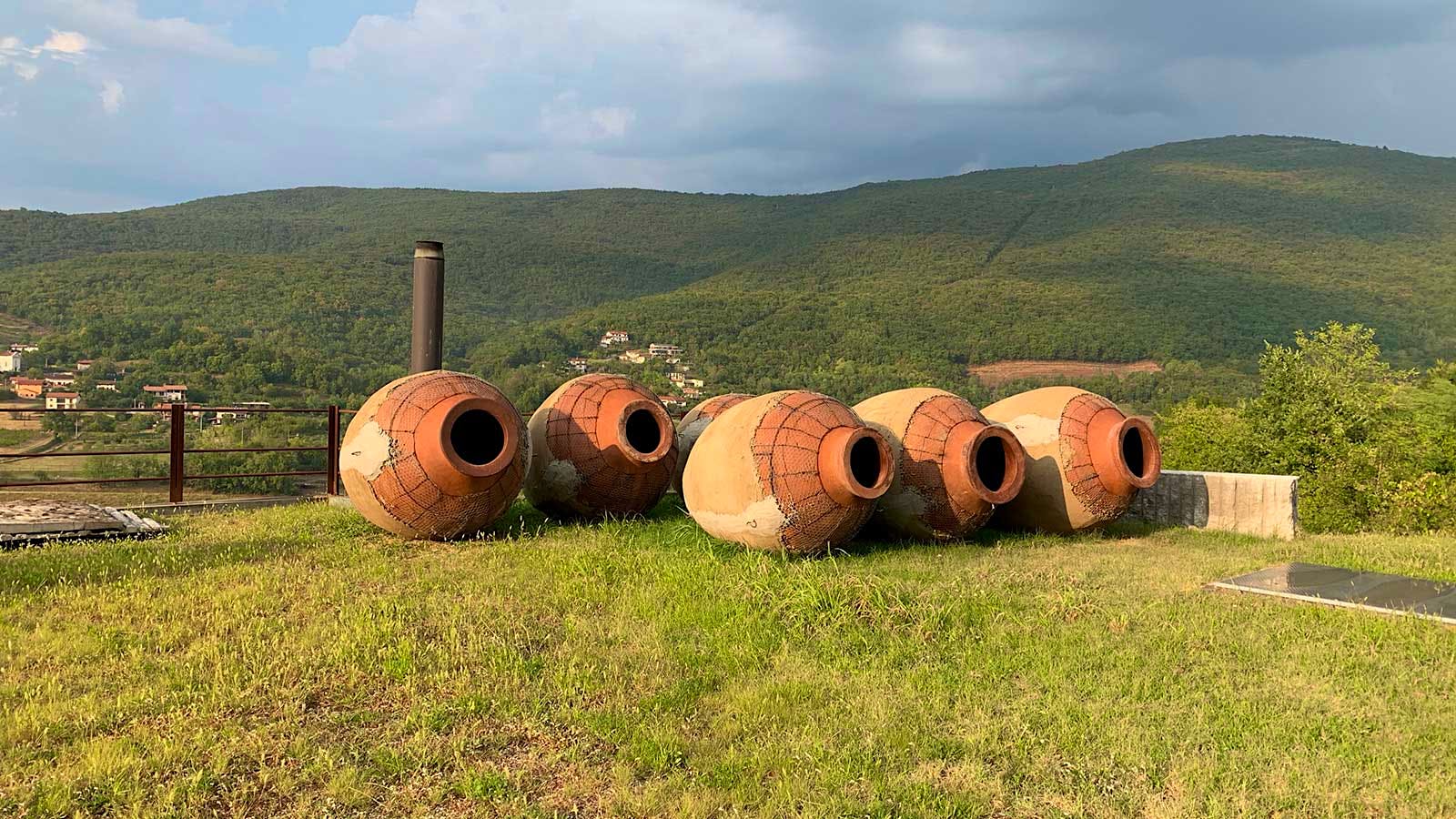 The traditonal Georgian clay qvevri will be buried outside, to receive Gravner's 2020 vintage. (Robert Camuto)

He is at an age—after more than 50 vintages—where he might retire or rest on his laurels. His signature, long-aged white wine, the Ribolla from Venezia-Giulia, has earned outstanding and even classic ratings; the 2009 ($86), one of the most current vintages available in the United States, scored 95 points.

But Gravner has kept pushing through triumphs and through personal tragedy.

Ten years ago, Gravner had prepared to turn over the winery and vineyards to his youngest son, Miha, his partner in winemaking. Then, a holiday motorcycle accident claimed the younger Gravner’s life, at 27.

“The next few years were very difficult for me,” says Gravner, drawing a deep breath. Gravner’s daughter Mateja returned home to help him with office operations and exports, and now Gravner is training her son, Gregor, 24, who grew up far from Oslavia, in the vineyards and winery.

“It’s one thing to do this work when you grow up in this air and this place,” Gravner muses. “But to come in from the outside and understand is more difficult—it takes years to change your head.”

He was born shortly after World War II into a Slovenian-speaking region that had just been divided in two, resulting in a hard border between Collio (within Italy) and Brda (in Communist then-Yugoslavia, now Slovenia). The Gravners, like many farming families, had vineyards on both sides and lived with daily checkpoints as they traveled in each direction to check on their land. (Read more about the wine scene in Brda.)

Gravner began working with his father at the age of 14. But by age 21, when he took over the winery and began bottling the wine, he had his own ideas.

Then he made a big U-turn.

After touring the wine world, from Burgundy to Napa, over the years, Gravner felt disillusioned with modern enology’s techniques. He became sick of what he calls “conventional wines,” yearning for something more essential in winemaking.

“I realized we had a valid terroir,” he says, “It was only that the contadini [farmers] were seeking to make quantity over quality.”

In the 1990s, Gravner ditched the barriques and steel tanks, along with chemical fertilizers in the vineyards. He returned to organic farming, large barrels and low tech. He sold the winery’s modern pneumatic press and replaced it with a refurbished, 1950s-era hydraulic basket press that he felt was gentler on the grapes.

The signature white grape of the Collio/Brda region, thick-skinned Ribolla, was traditionally fermented with some skin contact, like a red wine. But Gravner led a group of winemakers who experimented with extended macerations that lasted months, resulting in deeply colored, highly structured and textured whites that earned the informal designation of "orange wines." (Read more about skin-contact whites from the region.)

At the same time, he became intrigued with ancient methods of fermenting in terra cotta vessels used in the country of Georgia and travelled there in 2000 to learn more. In 2001, Gravner began fermenting his whites in qvevri buried in his cellar. In 2006 he followed with his reds. 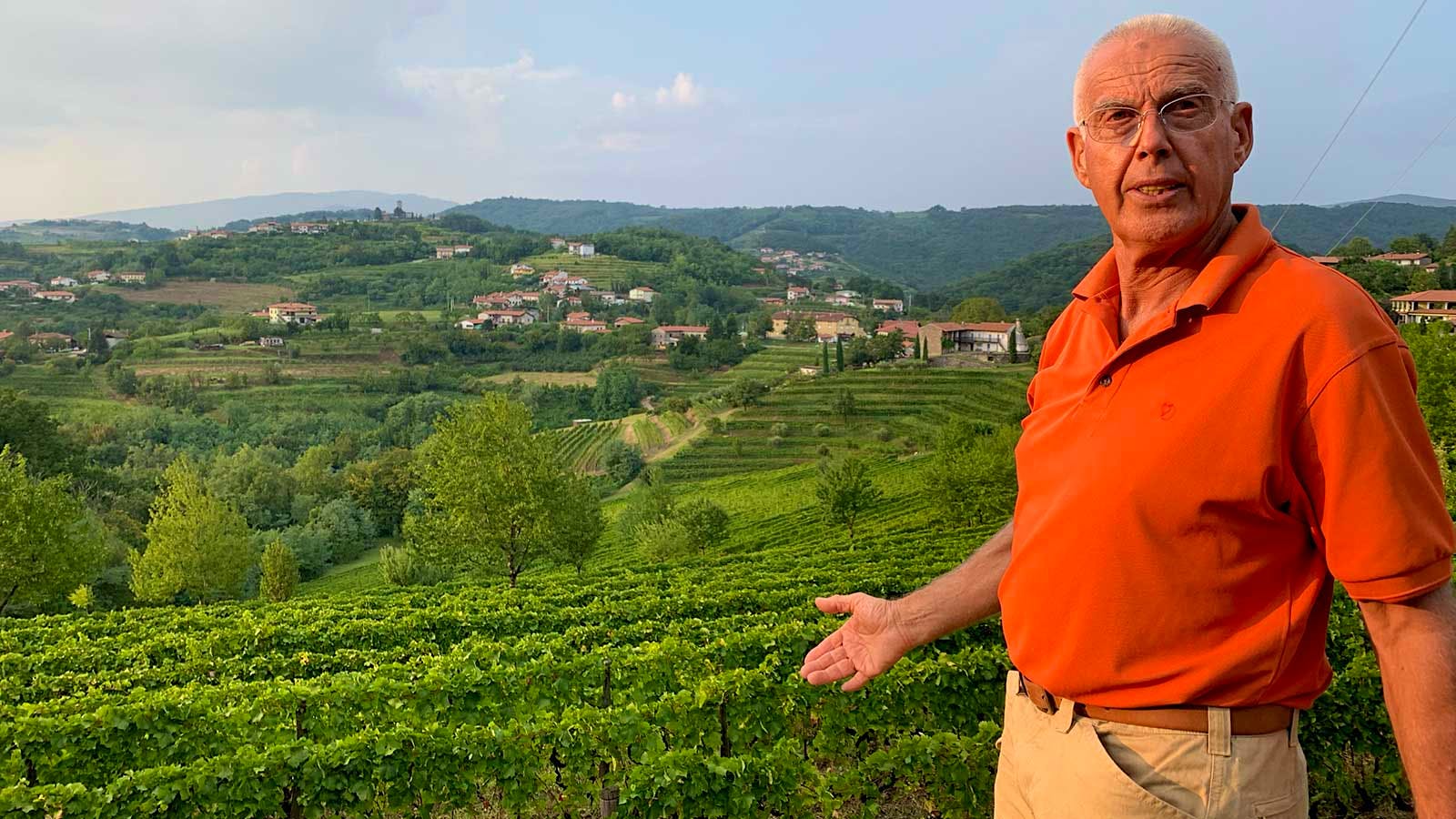 “A buried amphora is the best recipient for fermentation. And it finds its own temperature in the ground,” Gravner says, quick to add, “But the recipient doesn’t make a good wine—good grapes make good wine.

Today Gravner focuses on two wines: single-variety Ribolla and red Pignolo, which goes into his long-aged Breg Rosso bottling. (The current-release vintage is 2005). About seven years ago, he uprooted his plantings of international white grape varieties Sauvignon, Pinot Grigio and Riesling—decreasing his producing vineyards from 44 to 37 acres. He says he will eventually also abandon his Merlot and Cabernet plantings.

“I’m always going backward,” Gravner says of his career that has brought him closer to ancestral methods and grapes.

His vineyards on both sides of the now-open border between Slovenia and Italy—both members of the European Union—are kept like gardens, with rainwater ponds and trees to promote bird and insect life.

In the past four years, Gravner has embraced biodynamics—something he said he scoffed at 20 years ago as “poetry.”

“It works in giving life to the soil,” Gravner says of the farming strategy, adding that he has chosen not to seek certification. “I am biodynamic for me, for the vineyards, for the consumer and for respect of nature.”

After experiments in the 2016 vintage, Gravner changed completely in 2017 to whole-cluster fermentations with the stems. Many boutique winemakers in Europe do the same, but Gravner finds the practice especially well-adapted to winemaking in amphorae because it helps keep the grape skins naturally submerged during fermentation while aerating the wine, without manual punch-downs or pump-overs.

It will be at least another four years before he bottles his first effort made with that technique, the 2017 Ribolla. In the meantime, I’ll look forward to what Gravner does next.