Every great wine country needs beautiful agricultural landscapes, delicious local foods, warm hospitality and wine that can reel you in.

Brda, Slovenia, has all that.

Set between the Adriatic coast and the Alps, it's a gorgeous region of rolling hills covered with forests, terraced vineyards and olive and fruit groves. Dotted with small rural villages, it shares vineyards, grapes and a border with its smaller sister, northeastern Italy’s Collio region. Both are about a 90-minute drive north of Venice's airport.

Though batted from one nation to the next in the 20th century, Brda and Collio were historically one Slovenian-speaking region. They were divided after World War II by a militarized border, with most of the territory in Communist Yugoslavia and the rest in Italy—even though many families and farms straddled that line.

In 1991, Slovenia won independence; in 2004, it joined the European Union. The hard border dissolved. Life, culture and wine have been booming ever since, led by a generation of hearty and industrious Slovenians. Brda is a soulful place, from its people to its wines.

The area’s signature grape, Rebula (known as Ribolla Gialla in Italy), provides the wine soul. It’s an intriguing, golden-skinned variety that thrives in the hot afternoon summer sun without irrigation, digging its roots deep into the poor soils—layers of sandstone, marl and sedimentary rock—called “opoka” (or “ponca” on the Italian side). The best wines are believed to come from the highest-altitude, lowest-yielding terraces.

Rebula is getting a lot of thought here, with winemakers using it to make an incredibly wide range of wines, from fresh whites to ageworthy examples, from sparklers to sweet passito-style wines. It’s been used by producers, led by Italy-based Josko Gravner (who has some vineyards in Slovenia), to make extreme “orange” wines with long macerations on Rebula’s thick skins. 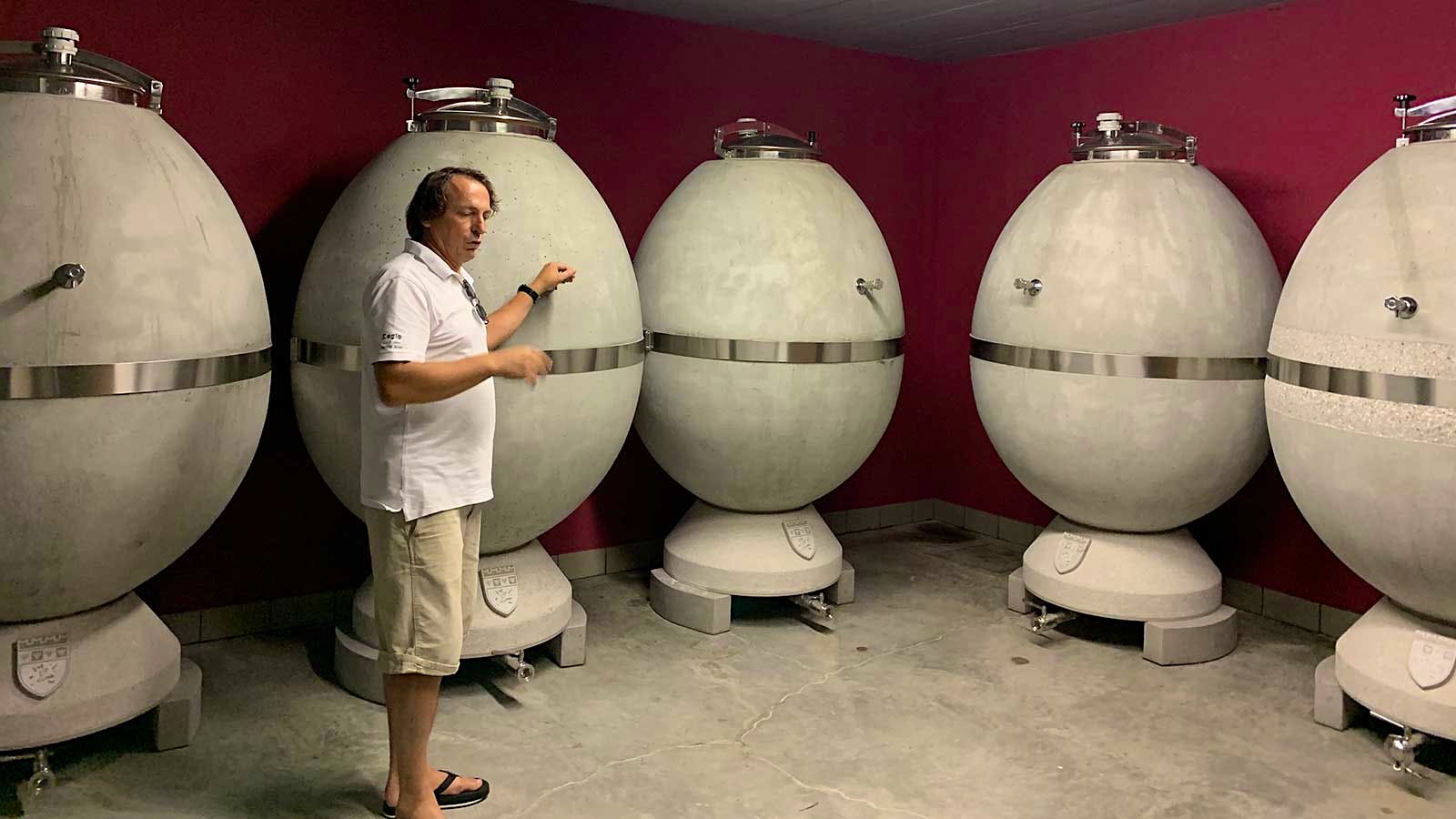 “Skin contact adds structure,” explains Marjan Simčič, a top producer who, with an annual production of about 11,000 cases, has wines readily available in the U.S. “It’s possible with the same grape to make many different wines. It can be like a red wine.”

Simčič, 51, like his neighbor Aleš Kristančič of Movia, is the son of a historic winemaking family. Both men work out of wineries with sprawling cellars beneath their homes. Both estates farm organically, have nearly half their vineyards on the Italian side of the border, and make a wide range of wines, from Rebula to long-planted international varieties (Chardonnay, Merlot, Pinot Noir, Pinot Grigio, Sauvignon Blanc) to Sauvignonasse, the local mouthful of a name for what was formerly known as Tokaj or Tocai Friulano.

Wine made from Rebula benefits from at least some skin contact, which adds tannic grip. Rebulas made without it can seem hollow. At the other end of the spectrum, extended skin contact—especially if done by less-than-expert hands—can make heavy wines. In between are complex, golden, mineral-driven wines with long aging potential.

After years of experimenting with all styles, Simčič is striving for that sweet spot, exemplified by his top-of-the-line Simčič Opoko Rebula—fermented on skins for about 18 days in large concrete egg-shaped tanks, then aged a year in those eggs before spending another year in large, used oak barrels. 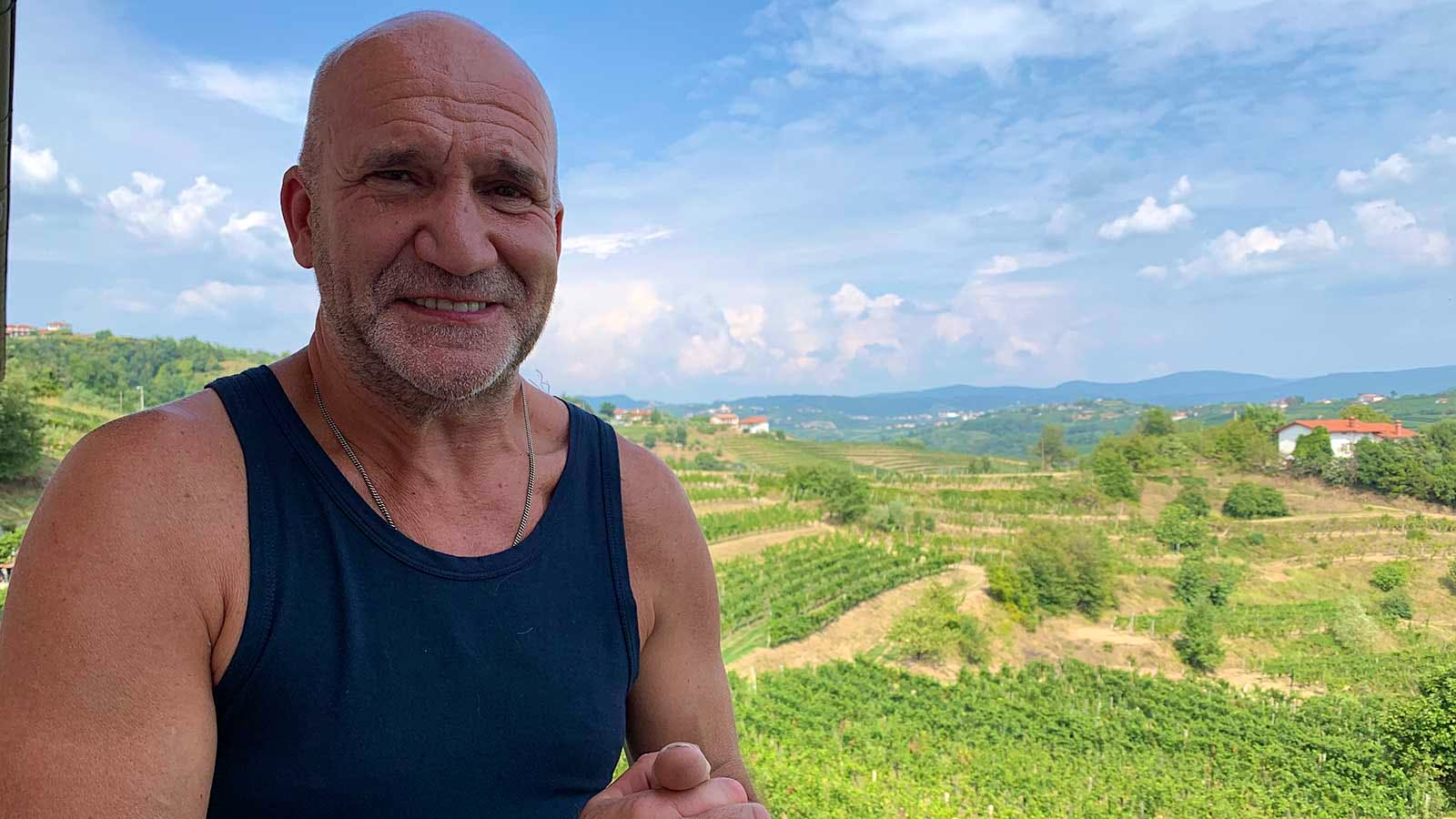 Kristančič, 52, of Movia, also makes a vibrant, medium-bodied Rebula with up to two months of skin contact. (The 2015 vintage, priced at $30, scored 90 points.)

“My father always told me that Rebula without any skin maceration creates a very dumb, neutral wine,” says Kristančič, a charismatic man and constant tinkerer who uses some skin contact in all his wines, but cautions: “At maximum, wine should be the color of the grape’s skin—anything darker and it’s oxidation.”

Kristančič is fond of saying, “Wine needs to please. You should not need an explanation in subtitles to drink.” Nevertheless, he has a new release that requires some explaining. It’s the first wine—as far I know—to be called an “orange de blancs.”

For the past 20 years, Kristančič has made vintage-dated, traditional method sparkling wines called Puro—a Chardonnay-based white and a rosé from Pinot Noir—with must added to the bottle (instead of yeast and sugar) and no added sulfur. Their quirk is that they are never disgorged, so that the remaining yeasts add a facet of protection to the no-sulfite-added wines. The bottles are shipped and stored upside-down, requiring disgorgement before serving—by popping the cork face-down in a water-filled ice bucket. His new Puro Orange, aged for the last decade, uses an extended skin-contact Rebula as its base wine. The first release, either 2009 or 2011 (Kristančič and his son Lan, 20, have yet to decide), is set for November.

Along with innovative wines, some winemakers are working to create a cross-border wine appellation in Brda-Collio. (Wines grown in one location but made in the other cannot carry either appellation.) Relations are warm between the two sides, with a number of projects that span countries. Prominent Collio producer Jermann purchased vineyard land in Brda in search of pristine, higher-altitude terroirs, planting 7 acres of Rebula there in 2014. Two years later, the winery produced its first vintage of a light white, called Ribolla Visvik, vinified in Italy from Slovenian grapes. 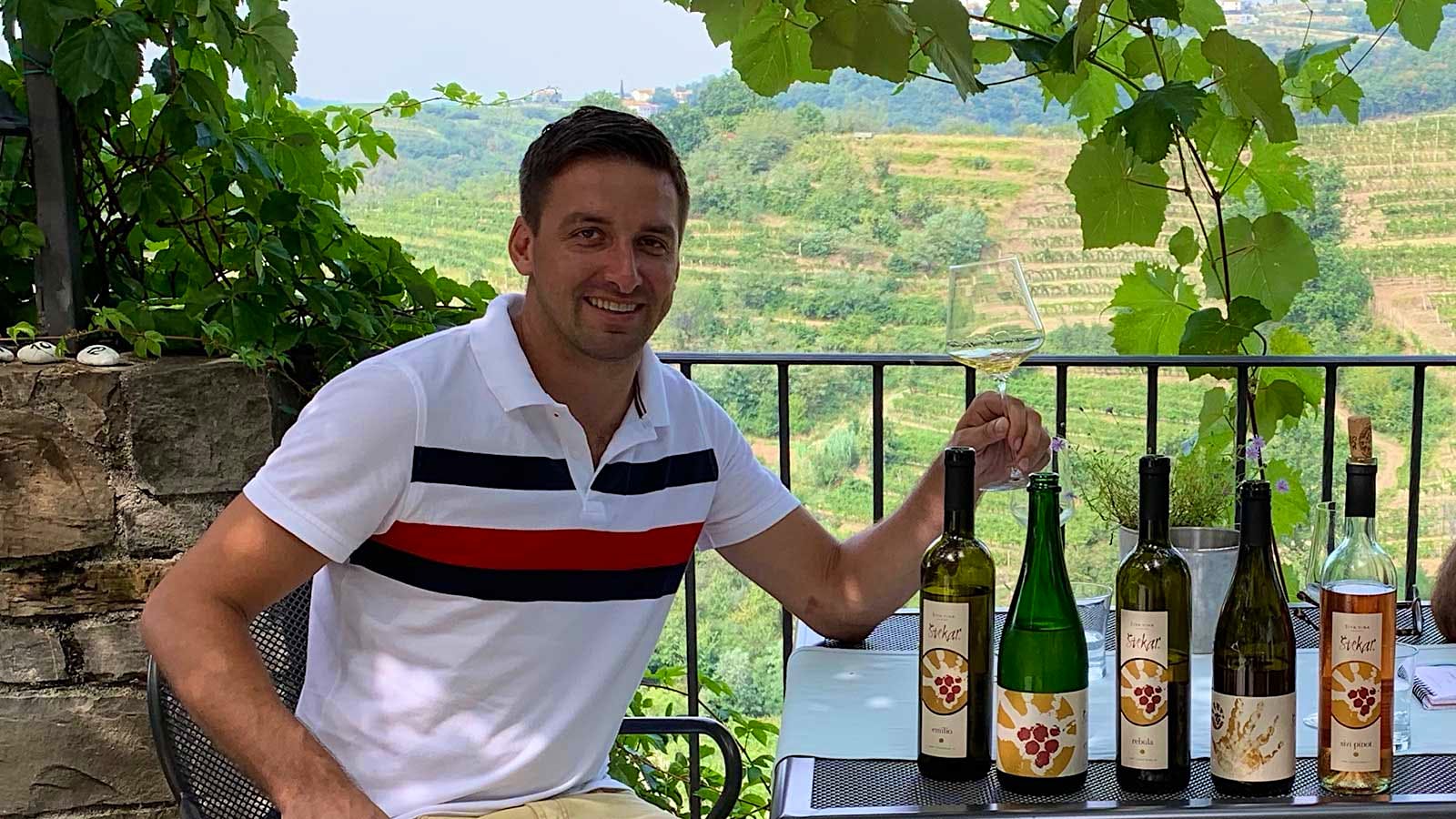 Because of proximity, Brda wines have enjoyed a place on some Italian restaurant wine lists and have often been found in the “Italian” section of wine shops. That now is changing as Brda wines come into their own.

“Marjan Simčič and Movia opened the doors,” says Jure Stekar, 35, an up-and-coming, fourth-generation winemaker who produces about 4,000 cases annually of extended skin-contact wines under his family’s Stekar label. “Now in the shops in the U.S., Slovenia is beginning to have its own section.”

Brda and Rebula merit that.