To chef Victoria Blamey of New York’s Gotham Bar & Grill, few meals are more festive than a big roast served family-style. “I love those recipes,” she says, treasuring the memories made around them at the dinner table.

Blamey, who grew up in Santiago, Chile, in a family of food lovers, began experimenting in the kitchen when she was just seven years old—though at the time her repertoire was limited to sweets and she was prone to misadventures. “They all tasted pretty bad for probably a good year or two,” Blamey laughs. “But it was just entertaining; that’s why I did it.”

While she loved cooking, Blamey initially saw it as a hobby, not a career, and chose to pursue a history degree. But two years into university, something clicked. “I was cooking as much as I was studying, and for no reason. Just because of the reason that I was enjoying it.” So at 21, she left for Santiago’s International School of Culinary Studies and never looked back.

Blamey quickly rose in the ranks of fine-dining kitchens around the world, traveling from England to Australia to Spain, and settling in New York in 2010. By 2016, she was reopening the historic West Village restaurant Chumley’s as its executive chef. In 2019, she took over the kitchen of another historic spot unveiling a revamp: Wine Spectator Best of Award of Excellence winner Gotham Bar & Grill. It’s the largest restaurant Blamey has ever worked in—“the big beast,” as she calls it—and the responsibility of reinventing such a mainstay of the dining scene is certainly not lost on her. But she wasn’t afraid of it, either.

“I love challenges, for sure,” Blamey says. “So I always do something that is going to seem a little bit more difficult.” 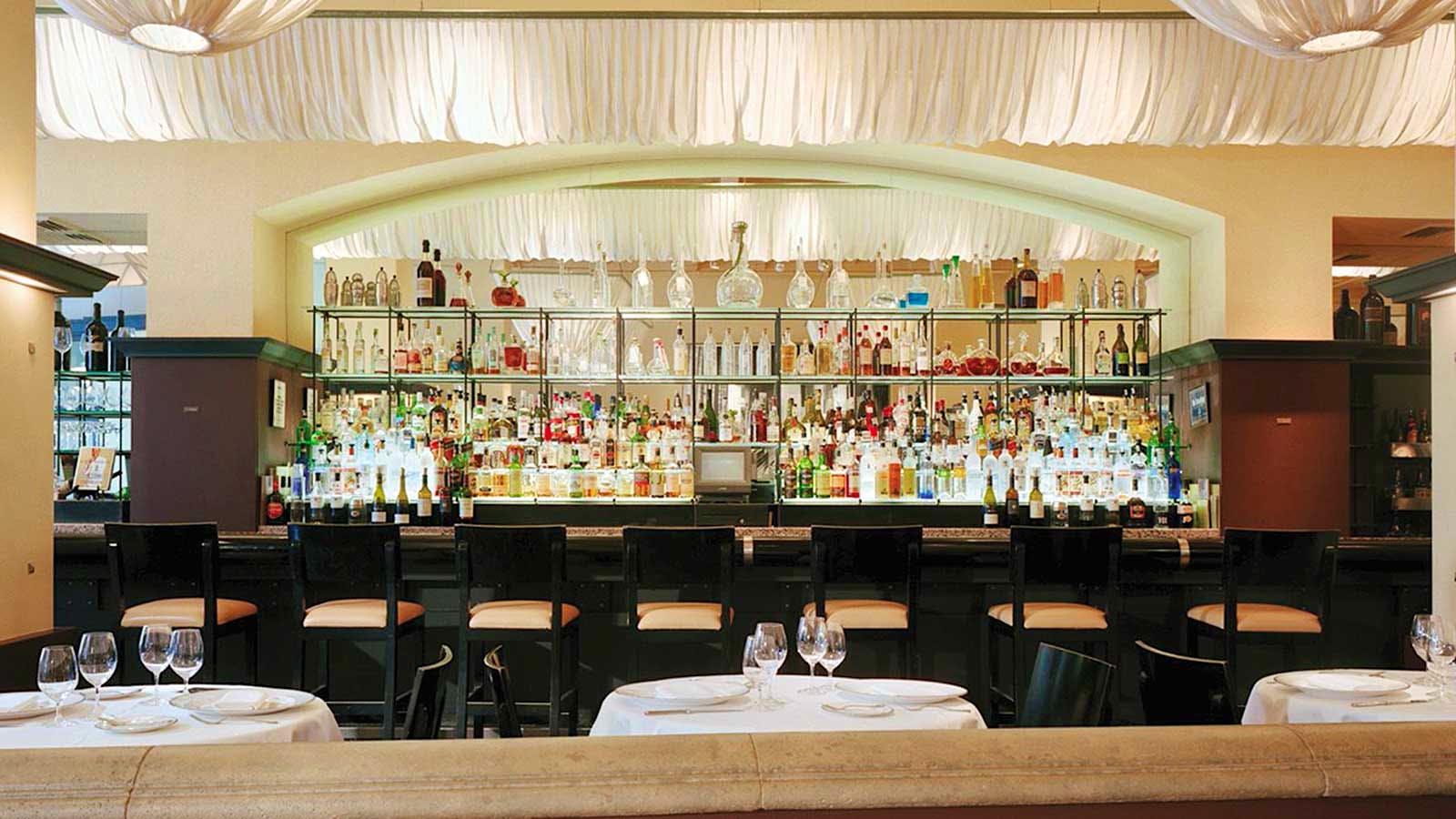 She says the response has been incredibly positive, from both new guests and longtime regulars. Being part of Gotham Bar & Grill, she says, “You’re a part of New York, but you’re a part of many people’s hearts, where they spend their anniversaries, birthdays, graduations. There’s always some sort of celebration.”

Where there’s always a celebration, it takes a special dish to deliver a “wow” factor worthy of Thanksgiving. That’s why Blamey is considering this impressive glazed ham for Gotham’s holiday menu this year, taking inspiration from her first restaurant job in 2004 at the Vineyard in Stockcross, England, where pheasant and duck were prepared for Sunday roasts.

Blamey admits she’s not a big fan of the traditional Thanksgiving turkey. “Ham has more flavor, it’s more succulent,” she says. “Turkey, usually you have to do so much work to keep it moist, and the flavor is so-so.”

There’s no shortage of flavor in this Thanksgiving-ready rendition, which comes from brining the ham to start. Though the 48- to 72-hour period requires patience, it’s hands-off, and Blamey insists it’s crucial. “I usually brine everything; I even brine fish,” she says. “That’s the best way to season any kind of product like that.”

The ham is then slow-cooked in a savory broth and coated in a sweetened glaze that has been reduced on the stovetop. Blamey says to be careful to avoid “reducing the glaze too much and making it too sticky,” since you’ll essentially reduce the mixture again in the next step, when you’ll finish the ham under the broiler to set the glaze. At that point, ideally, “It kind of gets a little bit syrupy. It creates a sort of layer.”

The final product marries East and West with help from bold ingredients like ginger, star anise, vanilla, Sherry vinegar and Szechuan peppercorns. “I love sweet and sour in general, so that’s why I like the combination of flavors,” she says. 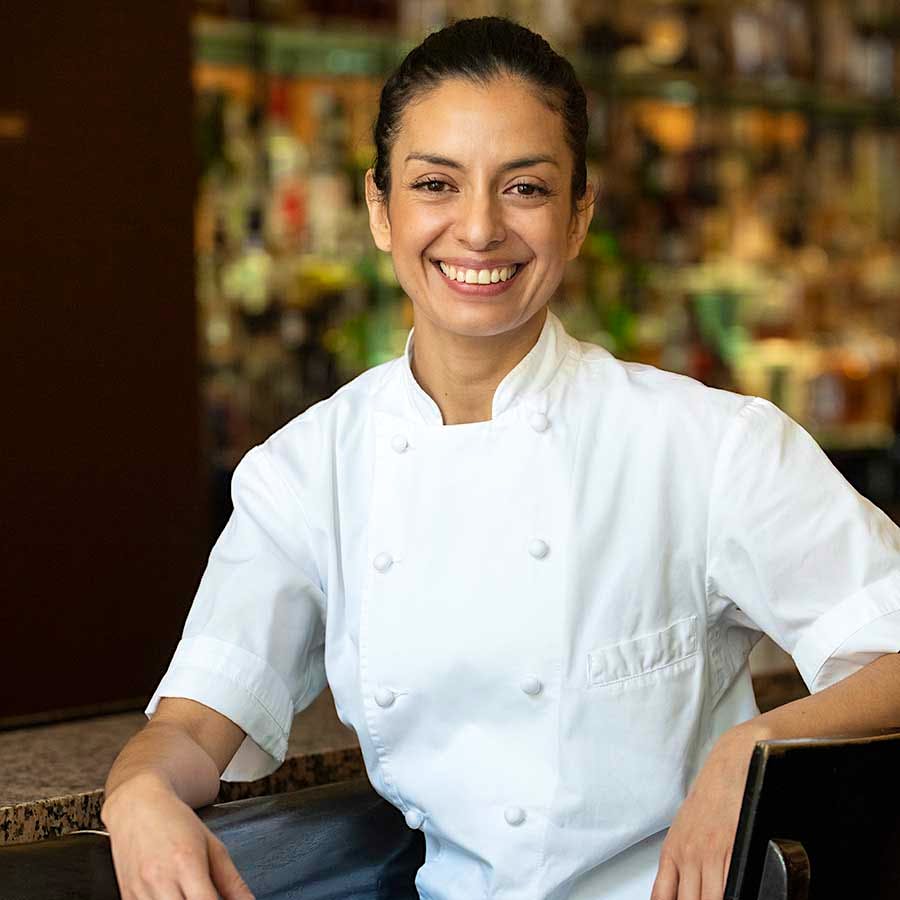 Blamey doesn’t offer any shortcuts beyond prepping the potatoes and glaze one day ahead, but each stage ensures the dish really packs a punch.

She suggests pairing the ham with a South American red wine, specifically Antiyal Maipo Valley 2015 from Chile, a blend of Carmenère, Cabernet Sauvignon and Syrah. Blamey worked with Gotham’s wine director Josh Lit to select this pick—a shout-out to her home country—for the “silky-smooth tannins” and “ripe, juicy, dark fruit” that come together to complement the recipe’s spices.

Below, Wine Spectator offers additional wine-pairing picks from Chile and Argentina that have a similarly rich and juicy dark fruit character to enhance the spice-laced ham.

1. Brine the ham: Combine brine ingredients in a large stock pot and add ham. Transfer to fridge and let brine for 48 to 72 hours. Remove ham and set aside, discarding brine.

2. Prepare the broth: Set a large pot over medium-high heat and sear the onions and garlic for 10 minutes, stirring occasionally. Add remaining broth ingredients, bring to a boil and reduce to 100 milliliters (a little less than a half-cup), about 45 minutes to an hour.

4. Make the glaze: Meanwhile, add honey to a large saucepan set over medium heat for about 30 minutes until it has a glaze-like consistency. Add vinegar and orange juice and reduce to 50 percent, about 15 to 20 minutes. Add stock and bring to a boil. Reduce heat to a simmer, add remaining glaze ingredients and let them infuse for 30 minutes. Strain and discard the flowers, herbs and spices.

5. Transfer ham to a wire rack set on top of a rimmed baking sheet. Score the fat several times with a knife and brush with the glaze. Broil in the oven for a few minutes until the glaze sets but do not let it burn. Remove from oven, glaze again, and return to the oven to broil once more. Remove from oven and let rest as you prepare the potatoes.

6. For the potatoes: Bring water to a boil in a large pot and season with salt to taste. Add potatoes and mint (whole, including stems) and boil until a fork inserted into a potato comes out smoothly, 45 minutes to an hour. Remove potatoes, discarding mint. Melt unsalted butter in a small pot over medium heat, whisking continuously. The butter will become foam-like, then begin to smell nutty, about three and a half minutes. At that point, remove from heat. Toss potatoes with brown butter and lemon juice. Season to taste with salt.

7. To plate: Carve ham vertically into 1/2-inch-thick slices and serve with the potatoes. Serves 8 to 12.

Note: The following list is a selection of outstanding and very good wines from recently rated releases. More options can be found in our Wine Ratings Search.

WS review: Rich, ripe and filled with luscious dark fruit and spice flavors, including kirsch, plum and cherry, turning creamy midpalate. Medium-grained tannins show on the finish, which is filled with dark chocolate and mocha hints. Drink now through 2023. 2,500 cases made. From Argentina.—Kim Marcus

WS review: Juicy, with good cut to the dark cherry, dried blueberry and kirsch flavors, supported by fresh acidity. Coffee bean notes come in midpalate, with dark chocolate accents on the finish. Drink now through 2023. 7,094 cases made. From Chile.—K.M.

WS review: Ripe and fruity, with touches of elegance to the plush cherry tart, raspberry and red currant flavors, supported by medium-grained tannins. Sanguine notes on the spicy finish. Drink now through 2023. 6,700 cases made. From Chile.—K.M.

WS review: Black fruit and tar flavors are supported by firm tannins and acidity in this muscular, savory style. Slate, olive and black pepper hints show on the finish. Malbec and Tannat. Drink now through 2024. 2,000 cases made. From Argentina.—K.M.