Making wine without grapes, sake without rice and whiskey without barley? Three innovators at San Francisco beverage company Endless West announced they had done the impossible(-sounding) with their new “molecular” wine and sake, the “next generation of wines and spirits.” What? Why? Huh? All good questions! So we got on the phone with two of Endless West’s co-founders, Alec Lee and Josh Decolongon, for a beaker of information on the project. And then, we poured up some glasses.

The inspiration behind Endless West came in 2015, when co-founder and scientist Mardonn Chua wondered if it would be possible to recreate the virtually extinct 1973 Chateau Montelena Chardonnay (of Judgment of Paris fame) from its molecular components up. First, they built a whiskey, Glyph, using plant extracts like citrus acid and fruit esters, to replicate a whiskey’s natural characteristics. 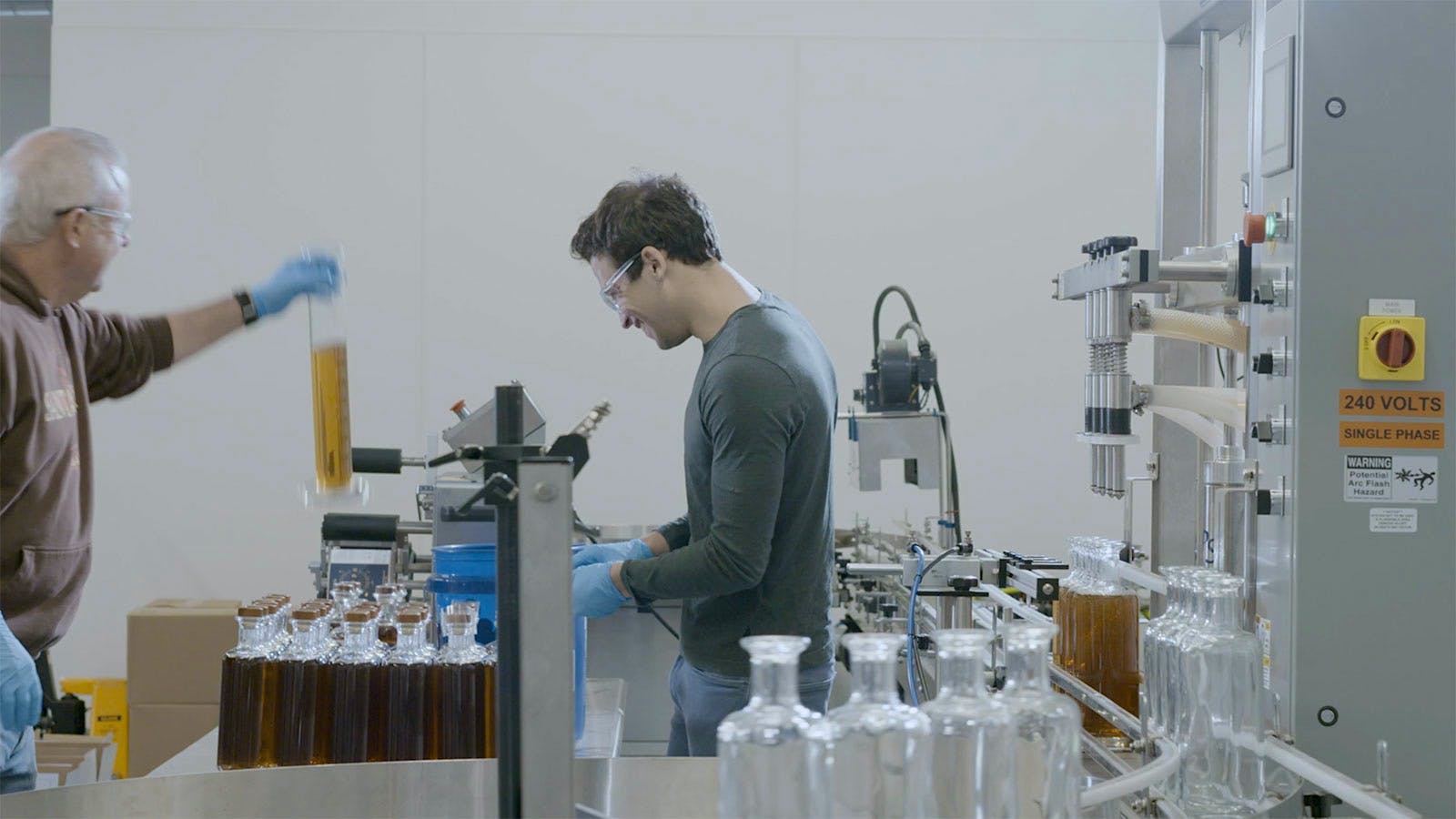 A man (center) who definitely did not create a massive, omnipresent social-media platform ... turns his talents to the original social networking tool, alcohol. (Courtesy of Endless West)

The team then moved on to wine and sake, and this month they announced the fruits of their labor (well, they are technically fruitless). The "wine," inspired by Italian Moscato, is called Gemello (Italian for "twin"), while the "sake” mimics the style of junmai daiginjo and nama genshu sakes. Decolongon, a sommelier, explained that Moscato d’Asti represented his “first time tasting something that was so well-balanced but also had that mix of fruitiness … I wanted to create something that really inspired my initial wine journey.”

All three drinks start as a neutral grain spirit, into which the team adds molecules and compounds found in wine and spirits, tinkering with the recipes to finagle a flavor and texture they hope approximates the real thing. It may be clinical, but the ingredients are familiar: “The molecules we use are the same molecules that are found in wine or whiskey," Lee explained. "It’s still derived from nature.” Corn and yeast are two sources the team mines for molecules; for the lightly fizzy Gemello, they also used molecular ingredients like ethyl butanoate extracted from peaches. Of course, under U.S. beverage regulations, the company can't label the stuff wine or sake, but the team is hoping to make "molecular wine" a legal designation someday, "to have an acknowledgment from the federal government that the thing that we make at a molecular level is wine, is whiskey,” said Lee. 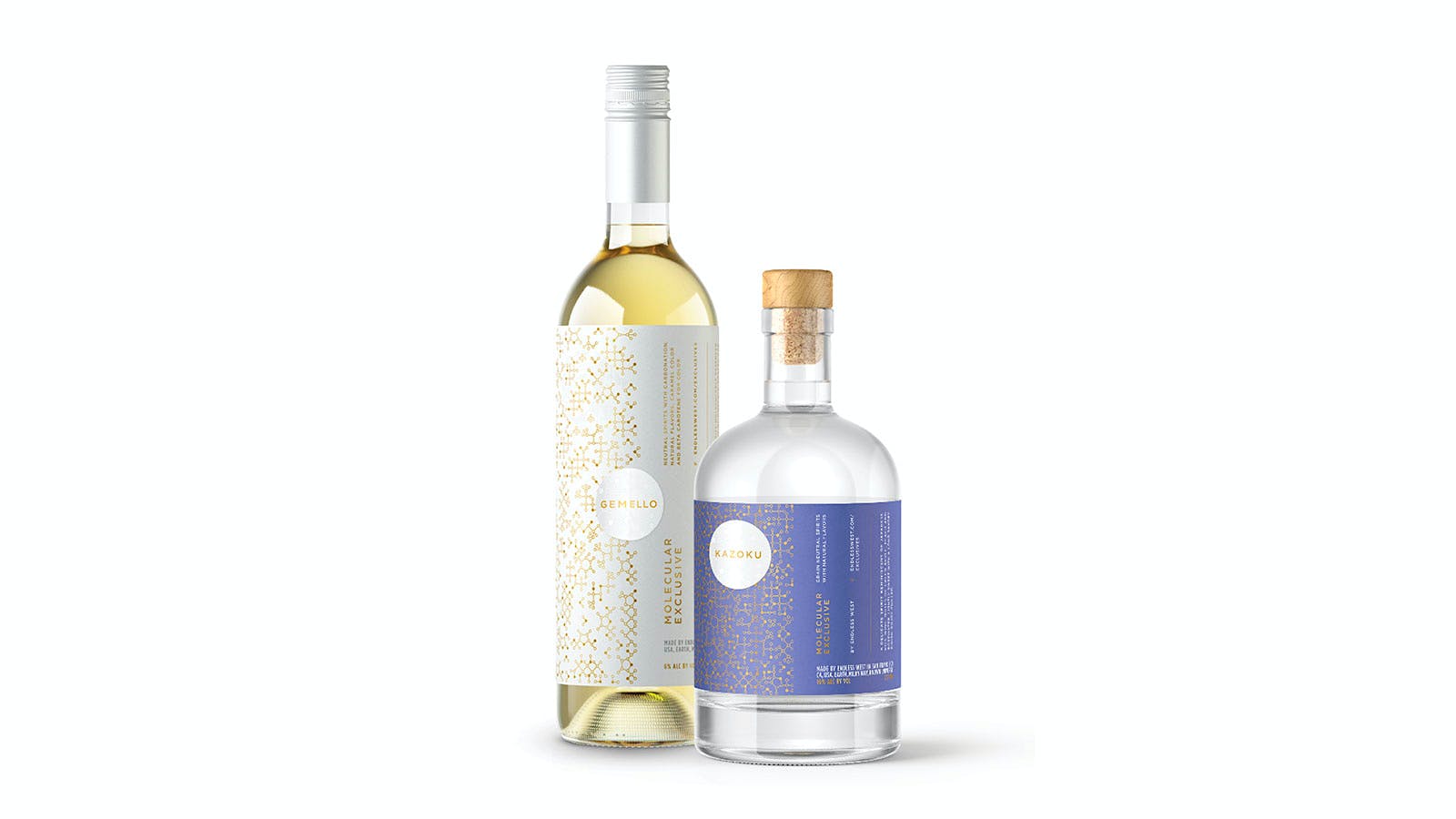 The new molecular wine and sake, preparing to blend in on the shelf (Courtesy of Endless West)

If you’re still asking “But why?” Endless West points to possible environmental benefits, claiming that their methods currently require less water and less land, and produce lower carbon emissions, than conventional grapegrowing and winemaking. Lee compared the growing of grapes versus the corn he uses in lieu of them: “You can get two crops of corn per year versus one harvest of grapes, and you have to do substantially less work to that land.“

So, is this curtains for wine and spirits as we know it? We put it to our experts in Wine Spectator's tasting department, who agreed the molecular versions had aromatic and textural similarities to their more traditionally made siblings, but also had some characteristics that made them unmistakably distinctive. At a suggested retail price of $9 and $14 a bottle for the sake and wine, respectively, you can judge for yourself. “If we can hit the trifecta of making things that are more accessible, exceptionally high quality in terms of flavor profile and much better for the environment," said Lee, "then we’re going to have a winning formulation.”