For most chefs, the primary goal is drawing diners to their restaurants. But Houston’s Chris Shepherd, 47, has a bigger picture in mind. He strives to promote the cuisine and success not just of his own establishments, but of the city as a whole.

Shepherd grew up in Tulsa, Okla., and moved to Houston for culinary school, where he kicked off his fine-dining career at Brennan's of Houston (a Wine Spectator Best of Award of Excellence winner) before opening his own spot, Catalan Food & Wine. It was there that his mission took form.

He wanted people to know his Houston—the one overflowing with distinct dining experiences fueled by passionate small-business owners, the one beyond the outside perception of steak houses and Tex-Mex joints in strip malls.

So when Shepherd opened Underbelly in 2012, he built the restaurant on close ties with local suppliers and a menu designed to promote the city’s underlying scene. He drew inspiration from the people and families he’d gotten to know personally over years of exploring neighborhood gems. He proudly hung their pictures on the entanceway’s walls and printed Houston maps on check-presenters, highlighting the restaurants whose dishes had inspired him. “I wanted to be the gateway drug,” Shepherd says. “I always felt like if we can get at least one person to go to one of these restaurants, then we won.”

Shepherd preaches this message in his cookbook Cook Like a Local, to be released Sept. 3. “It’s getting people to venture outside of their day-to-day and become part of a community and not just part of a city,” he says.

The mantra is also built into the culture of Shepherd's Underbelly Hospitality group, which includes steak house Georgia James and One Fifth, a rotating project of five concepts over five years.

One of Shepherd’s biggest influences, Indian eatery London Sizzler, inspired the flavor-packed recipe he shares as an ultimate Labor Day crowd-pleaser: masala chicken wings. He’s known the family owners of the Indian spot for over a decade. They taught him how to pile on the spice without sacrificing balance, pushing Shepherd to “quit cooking like an American.”

Much like barbecue sauce, masala blends vary by region and household. This London Sizzler–inspired rendition stars bright and bold ingredients like Thai chiles, ginger, cilantro and plenty of garlic, incorporated into a marinade that is enhanced by even more spices and rounded out with yogurt.

The masala will keep in the fridge for up to five days, and it’s inherently riffable. “Try this one, and then go for it with something else—make your own spice blend. You have the basis for it now, and that’s the thing,” he says. “Hey, if you wanna blow your face off, go ahead, throw some serrano [peppers] in there, I don’t care. If you’re gonna do that, maybe invite me over.”

The wings should sit in the mixture for four to 10 hours, and Shepherd recommends sticking to the higher end of that spectrum. “I’d make it the day before,” he says. “Because you’re letting everything combine and meld.” Then the chicken hits the grill for a high-heat char before a lower-heat roast. Peppers also get roasted on the grill for garnish, and while mild Anaheims are Shepherd’s pick for their spice-level consistency and availability, varieties like jalapeños or poblanos will work too. A dipping sauce of raita, a cooling Indian condiment, brings it all together.

The versatile recipe works for any day of the week but can also be easily scaled up for your Labor Day get-together. “You can go two, three, four times batch on this,” he says. “This is something you can throw at any party, any shindig, or just on a Tuesday night.” 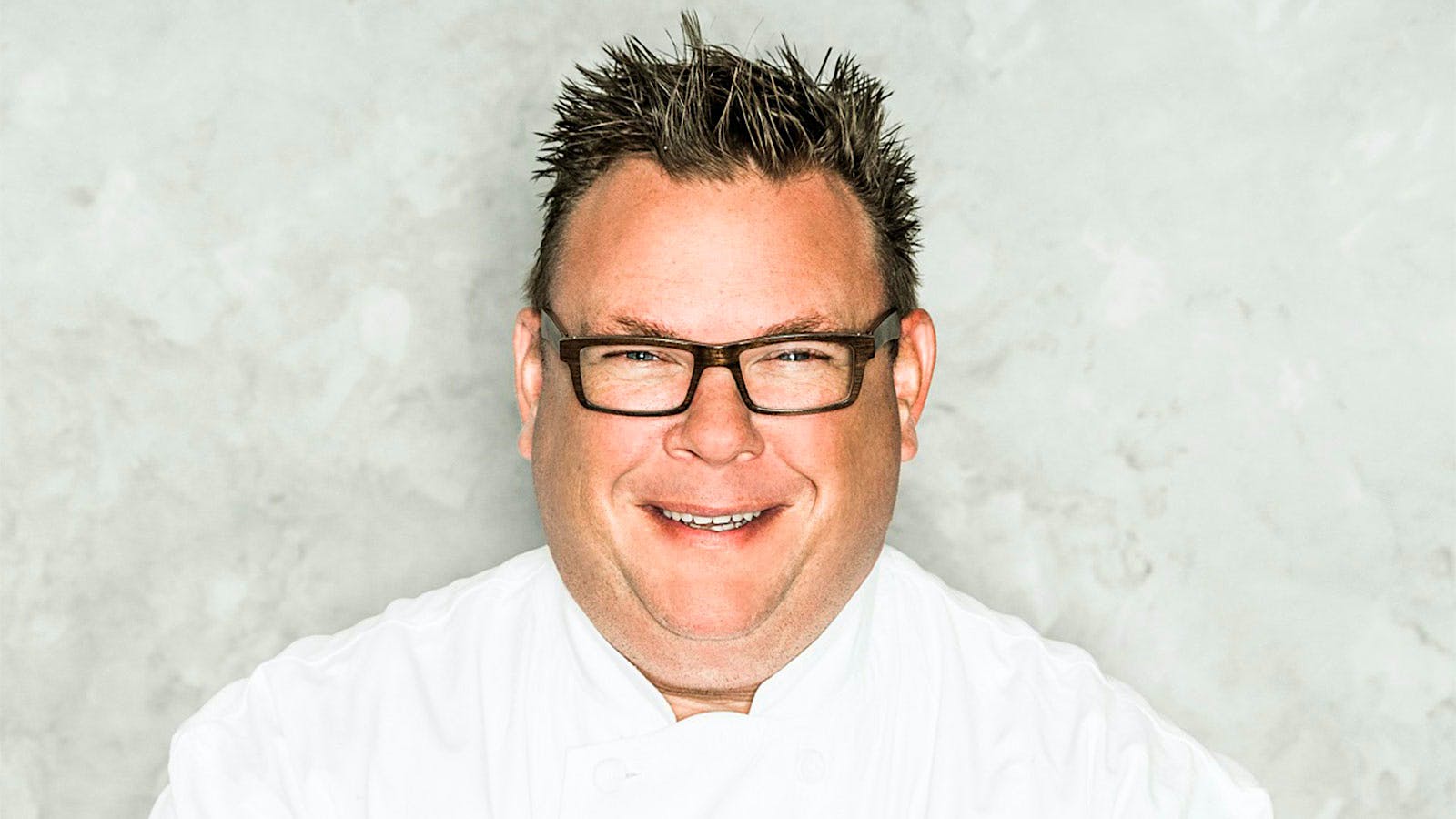 Julie Soefer
Chris Shepherd is known as a champion of Houston’s culinary scene.

Shepherd ran the wine program at Brennan’s of Houston for two years, so he’s no stranger to pairings and knows exactly what to reach for to match this dish. "I think when you have that dry, smoky heat, Chenin's awesome,” he says. “It works fantastic.” He’s particularly a fan of Huët for Loire Valley Chenin Blancs, going with the Domaine Huët Vouvray Sec Le Mont 2017.

Below, Wine Spectator offers additional picks for complementary French white wines, including other Loire Chenin Blancs, as well as bright Sauvignon Blancs and Rieslings that share the vibrant acidity and ginger notes of Shepherd’s pick.

So grab a few bottles and use the dish as an excuse to share Shepherd’s message of connecting to your community through cuisine, wherever you are. “Food is the common denominator for all,” he says. “You may not see eye to eye on anything else, but food is always an open conversation.”

Reprinted with permission from Cook Like a Local by Chris Shepherd and Kaitlyn Goalen, copyright © 2019. Published by Clarkson Potter, a division of Penguin Random House, Inc.

For the masala mix:

1. For the masala mix: Combine all the ingredients in a food processor and blend until smooth. The masala will keep in an airtight container in the refrigerator for up to five days.

2. Prepare the wings: In a resealable plastic bag, add the masala mix, coriander, cumin, cayenne, paprika, yogurt and salt. Seal the bag and shake and squeeze until everything is nicely combined. Add the chicken wings, seal and shake again to coat thoroughly. Refrigerate for 4 hours or up to 10.

3. Make the raita: In a medium bowl, whisk together the yogurt, mint, cilantro and lime juice. Using the large holes of a box grater, grate the cucumber. Place the grated cucumber in the center of a clean kitchen towel, bring the corners together and twist (like you’re wringing out water) to squeeze out the excess liquid. Mix the cucumber into the yogurt mixture. Season to taste with salt and pepper, and refrigerate until ready to use.

4. Prepare a very hot grill, creating zones for direct and indirect heat. If you’re using charcoal, you can do this by banking all of the coals to one side. On a gas grill, only use the burners on one side, at full blast. Pull the chicken wings out of the marinade, letting the excess drip off. Place the wings over direct heat on the grates, and grill, turning occasionally, until the wings are charred on all sides, about 8 minutes. Move the wings to the indirect heat zone and let roast until the chicken is cooked through, about 15 minutes. Meanwhile, add the peppers to the direct heat zone and char until softened.

5. Cut the peppers in half and serve them mixed in with the wings on a large platter, with the raita on the side for dipping. Serves 6 to 8.

Note: The following list is a selection of outstanding and very good wines from recently rated releases. More options can be found in our Wine Ratings Search, including these Chenin Blancs that recently scored 85 points or above.

WS review: Beeswax and honeyed chamomile tea notes frame the core of glazed pear and nectarine in this broad-shouldered white. Shows hints of sweetness midpalate, but the acidity cuts through quickly and delivers a mineral-laced finish. Drink now through 2028. 1,200 cases made, 470 cases imported. From France.—James Molesworth

WS review: Bright pear, green apple and quince notes stream through, flecked with powdered ginger and backed by a fine mineral echo through the finish. Refined and focused. Drink now through 2026. 500 cases imported. From France.—J.M.

WS review: This shows a little bit of sweetness but is very well-balanced due to the prominent acidity that bursts through, linking the ripe orchard fruit details with berry and fig notes. Mineral elements emerge midpalate and linger on the long finish. Drink now through 2025. 900 cases made, 300 cases imported. From France.—J.M.

WS review: Silky in texture, showing nuances of gooseberry, ground ginger and lemon zest, this white is refreshing and fueled by electric acidity. Mineral accents linger on the well-defined finish. Drink now through 2026. 15,000 cases made, 400 cases imported. From France.—J.M.

WS review: Plump peach, quince and ginger notes are offset by zingy acidity, with a mineral-edged finish. There's a light echo of persimmon too. Drink now through 2021. 2,500 cases made, 1,156 cases imported. From France.—J.M.

WS review: White ginger, jasmine, quince and pear notes glide together, backed by a flutter of honeysuckle on the medium-weight finish. Drink now through 2023. 1,083 cases made, 400 cases imported. From France.—J.M.

Fall Bounty Gets Some Love