Restaurants are major contributors to the crisis of climate change. Full-service restaurants generate 7.3 million tons of food waste annually, according to a 2016 report by ReFED, a data company focused on reducing waste. And according to the Green Restaurant Association (GRA), a nonprofit that helps restaurants become more environmentally responsible, the U.S. restaurant industry consumes one-third of all electricity in the retail sector.

While that's a disheartening fact for diners and restaurateurs to face, it also means the industry has the capacity to produce significant positive change. In recent years, as concepts like seasonal menus and "farm-to-table" dining have become ubiquitous, restaurateurs have also started to think more about their environmental impact. "I've been in the restaurant industry for 27 years, and when I started in the industry, you never saw anything like this," said executive chef Andrew Smith of Riverpark in New York. "Everything just went in the garbage, and I'm not sure people even knew what organic was at that point."

There are now 640 "Green Restaurants" certified by the Green Restaurant Association across the U.S. and Canada, with star ratings based on areas such as water efficiency, sustainable food and energy. Between those certified restaurants and those on the path toward certification, GRA's number of locations has grown by 255 percent since the start of 2009.

From the carbon emissions and pesticides associated with food production, to transporting that food to the restaurants, to everyday energy use, there are opportunities for improvement in almost every area of the industry.

While many businesses are embracing new ideas, numerous restaurants have been making real, impactful efforts for a long time, and that commitment has only strengthened. The movement builds on a foundation forged by chefs like Dan Barber of Wine Spectator Grand Award winner Blue Hill at Stone Barns, who has long worked to educate consumers about the food chain and sustainability, and Nancy Silverton, who helped pioneer seasonal dining and continues to prioritize sustainable practices in her restaurants.

"It's always been ingrained in me, but in the '90s they weren't really calling it green and local and sustainable," said Peter Pollay, chef and co-owner of Posana in Asheville, N.C., which holds a three-star certification from the GRA.

Because going green can involve additional costs up front, it requires passionate dedication from people like Pollay, and like Gayle and David Darugh, owners of Beechwood Inn in Clayton, Ga. The Darugh's bed-and-breakfast boasts a lengthy list of initiatives, with on-site electric vehicle charging stations, partnerships with organizations like Clean World Foundation and the Sierra Club, energy-efficient appliances, tankless water heaters that operate on an as-needed basis and much more. They have an extensive recycling program even though there's no pick-up service in the area. They deliver recyclables to a nearby center themselves.

Both self-proclaimed environmentalists, integrating these values into their restaurant was a no-brainer as soon as they opened Beechwood Inn in 2000. "We started in that direction right away," David Darugh said. "Every time we make a capital improvement, it's designed to reduce the carbon footprint of our property."

Sabio on Main in Pleasanton, Calif., has also been a local pioneer of eco-friendly practices. Owner Jim McDonnell and chef-partner Francis Hogan, both avid composters at home, sought out the city's commercial composting program when they opened the restaurant in 2015, only to find that it didn't exist.

"The idea that we were gonna put in the landfills thousands of pounds of organic material was just inconceivable, frankly," McDonnell said. So they helped create a pilot program and became the first restaurant in their city to compost. Along with recycling, they now divert over 1 ton of waste from landfills each month.

Another major waste-reduction strategy at these restaurants is avoiding plastics in things like straws and take-out materials. Beechwood Inn swapped plastic coffee stirrers for wooden Popsicle sticks, and ditched plastic to-go cups for ones that can biodegrade in three weeks. Chef Rick Bayless' fast-casual concept, Xoco, goes one step further by providing metal silverware for to-go and delivery orders.

Chef-owner Ty Thames of Restaurant Tyler in Starkville, Miss., employs some particularly creative recycling practices, in addition to composting hundreds of pounds per week. Empty wine bottles are used as vases in the restaurant, given to a local candle-maker, or repurposed into drinking glasses for coffee shops and other businesses around town. At Thames' 90-acre farm nearby, corks are used as little landing pads in the pond for inhabitants of the on-site beehives.

"I just think it's our responsibility as humans not to take advantage of our natural resources," he said. "And as a chef, any product that we get, I was taught, you use everything to its full potential."

Denver chef Paul Reilly applies the same philosophy at his restaurant Beast + Bottle. Though the name implies a meat-centric menu, Reilly says it actually embodies a whole-product approach that extends to seafood and vegetables as well. Products that would otherwise be wasted are repurposed on the menu, preserved for later, or used for family meal whenever possible. As he phrased it to Wine Spectator, the motivating question is, "How do we honor the integrity of this product that somebody worked really hard to grow for us or raise for us?"

At all of these restaurants, locally grown, seasonal and organic produce is crucial to their mission. Among other benefits, using these ingredients helps support responsible farming and cut down on harmful emissions from trucking food to restaurants. Fortunately, it's become easier in the past decade.

"There weren't a lot of local farmers [when we started]," Thames said. "There were farmers' markets, but they were just kind of the popular items, it wasn't a year-round kind of thing."

"We had consultants come in and talk to us a year ago about how to run the place better, and what they said is, 'Quit buying these products. Go to Walmart, go to food distributors, go to wholesalers,'" Darugh said. "And that's just not the direction that we've chosen to take."

Some restaurants employ their own farmers, like chef Tom Colicchio's Riverpark, which features an urban farm right next to the kitchen. Chef Smith works with farm manager Jonathan Sumner on a daily basis to source ingredients like fairy tale eggplant, shishito peppers and herbs for seasonal menus. Sumner says it's a rare chance to only grow what they need, and to harvest ingredients based on desired flavor and texture, rather than size and quantity, which tends to produce more waste. The restaurant sources additional ingredients from other nearby purveyors, including the 3-acre Farm Tournaut in Montgomery, N.Y., which provides produce almost exclusively to Riverpark. 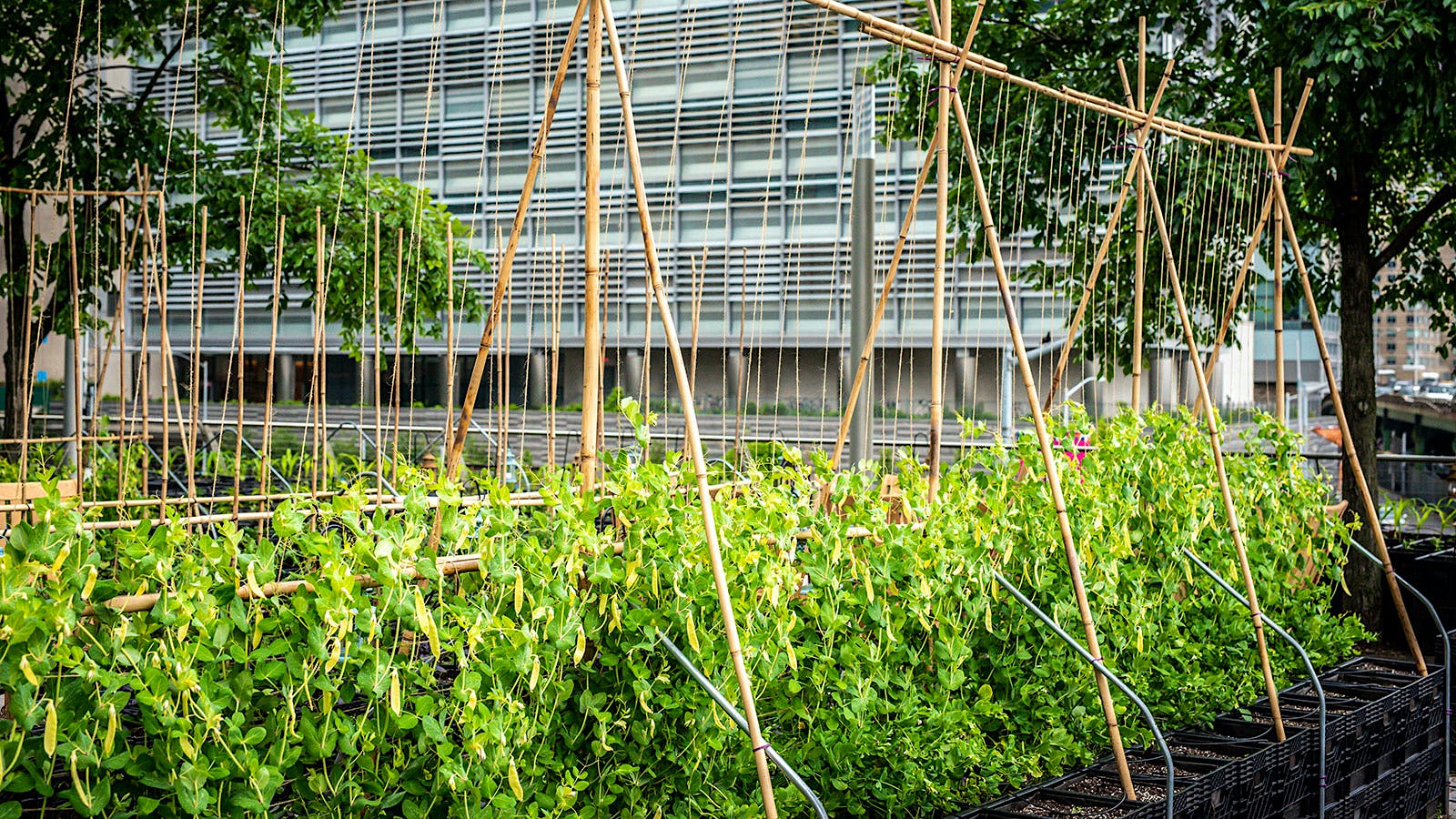 By growing vegetables in a green space near the restaurant, Riverpark cuts down on delivery truck emissions. (Photo courtesy of Crafted Hospitality)

Just as important as where food comes from and how it's grown is the food itself. According to a report from the University of Michigan's Center for Sustainable Systems, a meat-based diet uses twice as much energy to produce as a vegetarian diet, and our current meat-production processes are seriously impacting land use, water use and pollution in air and water. All this has lead to the recent popularization of plant-based eating, which has grown from a personal dietary choice to a widespread trend. Vegetarian tasting menu options abound in the fine-dining world, including at destinations like Thomas Keller's Grand Award winner the French Laundry. The plant-based Impossible Burger is now available in more than 15,000 U.S. restaurants, even at big-name spots like Del Frisco's Grille and Momofuku Nishi in New York, and Solbar and Harvest Table in Napa Valley.

Sustainability values often spill over to beverage programs, too. On their Wine Spectator Restaurant Award–winning wine lists, the restaurants noted in this story seek producers whose growing practices align with the ones they look for when sourcing ingredients. "We love organic and biodynamic, and as much sustainability practices as possible," Pollay said. These kinds of wines, highlighted on hundreds of Restaurant Award–winning lists, aim to cut down on environmental harm through responsible farming methods and avoiding chemical pesticides.

Small growers and lower-production labels are also becoming increasingly prevalent in restaurants. "We like the sweet spot of, like, 200 to 800 cases a year, nothing like 40,000 cases," Pollay said. "And we like to be able to speak to the importer directly or maybe even the owner of the winery or the viticulturist or the winemaker. You just have a better connection of where everything's coming from."

Local beer and craft cocktails have also swept the country. Beast + Bottle, for example, offers at least one local option for nearly every type of spirit on site, and an almost-exclusively local beer list. There's also a close connection between the kitchen and the bar team to make use of excess produce. "They're kind of feeding off what we're purchasing from farms," Reilly said.

Even with all these advancements, some restaurateurs say the consumer side still has a long way to go. "I think you see a lot more of it these days …. But I'm not sure if it's 100 percent front and center for people's mindset when they're going out to a nice dinner," Smith said. "You can push it as far as the market will support it."

McDonnell echoed this idea. "Ultimately, the thing that will drive the restaurant industry is if consumers vote with their wallets," he said. He points to the lack of a standardized certification system as one inhibitor. Though certifications are available through organizations such as GRA, Good Food 100 and Eat Real, he'd like to see a clear-cut, reliable way for consumers to make decisions based on a restaurant's environmentally responsible practices, similar to organic and non-GMO labels in grocery stores. "It's easy for restaurants to say, 'We buy all our ingredients from these farms and ranches,' but how does the customer really know?"

But restaurateurs still have hope for the future, believing sustainability is a win-win situation. Thoughtful sourcing directly leads to higher-quality ingredients, and therefore a better consumer experience. As Smith put it, "It's an opportunity to have your cake and eat it too."

"It's just better, tastier, and you know where your food's coming from, and it keeps us excited," Pollay said. "The love and care you take with it always ends up with a better product."

If more restaurateurs prioritize these values and more consumers support that, there's massive opportunity for change.

"What's happening with our environment at this time, it seems like a huge daunting task," Pollay said. "But if all of us do our part, no matter how little we think it is, it all adds up and makes a big difference. We do what we can, we do what we think is right, and find a way to make it happen."

Both venues, in NoMad and Times Square, offer substantial selections of sparklers. Plus, …