From the earliest episodes of Julia Child's The French Chef to the game-changing competition shows Iron Chef and Top Chef, cooking shows have carved out their own television niche. But have you been lucky enough to eat at a restaurant run by one of the chefs you've seen on screen? These 12 restaurants star colorful characters you're sure to recognize, plus robust wine lists for every type of wine lover. 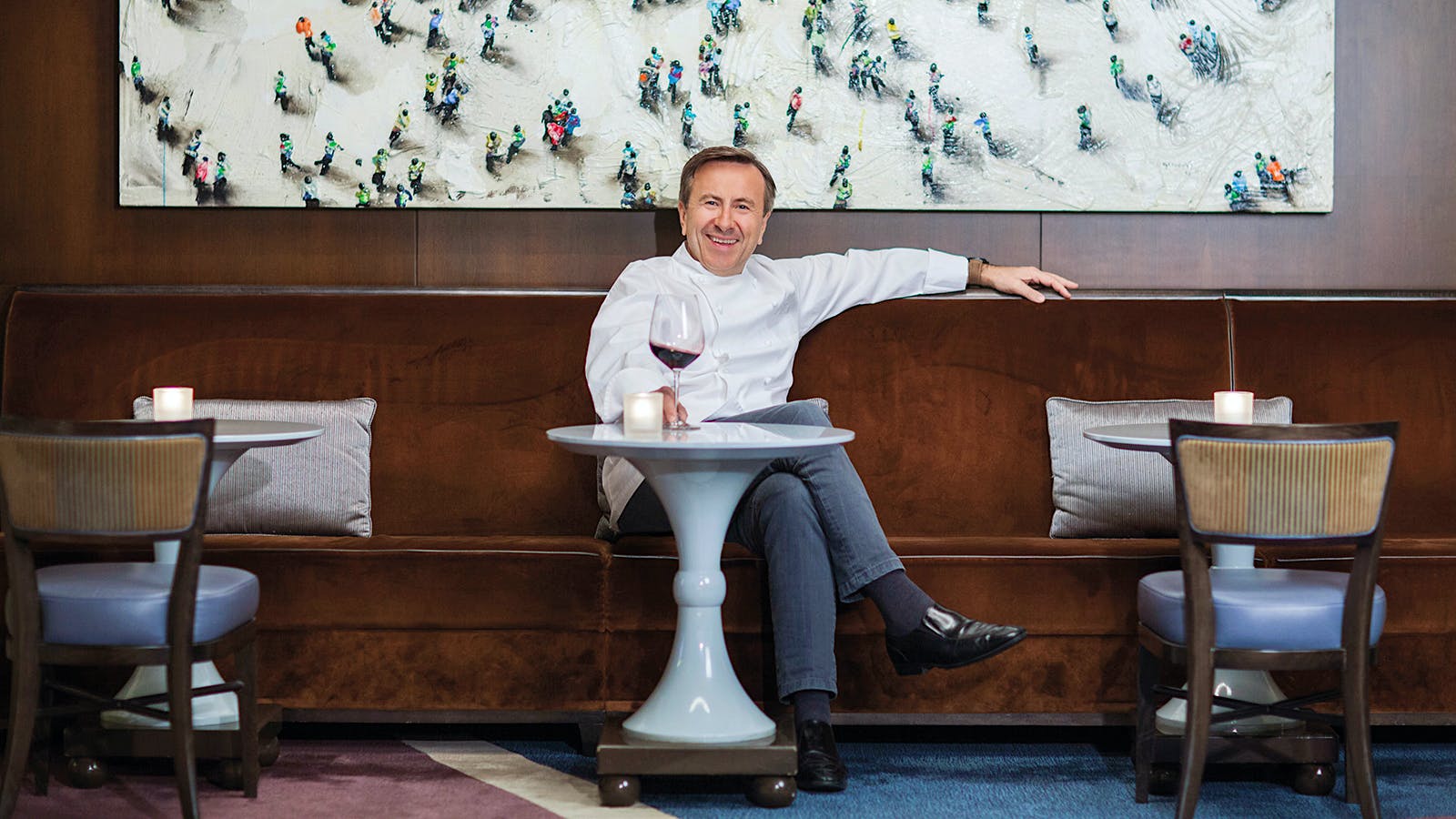 Esteemed French chef Daniel Boulud tagteams with head sommelier Raj Vaidya at Daniel, his elegant flagship restaurant. Boulud called his show, After Hours with Daniel Boulud, a "show without a script," but at this restaurant the prix-fixe menus and superb wine list are meticulously maintained. Dine on French classics through four courses for $158, with wine pairings starting at an additional $82. The wine list, 2,000 selections strong, has expansive breadth and depth in Burgundy, Bordeaux, the Rhône, Germany and Champagne. 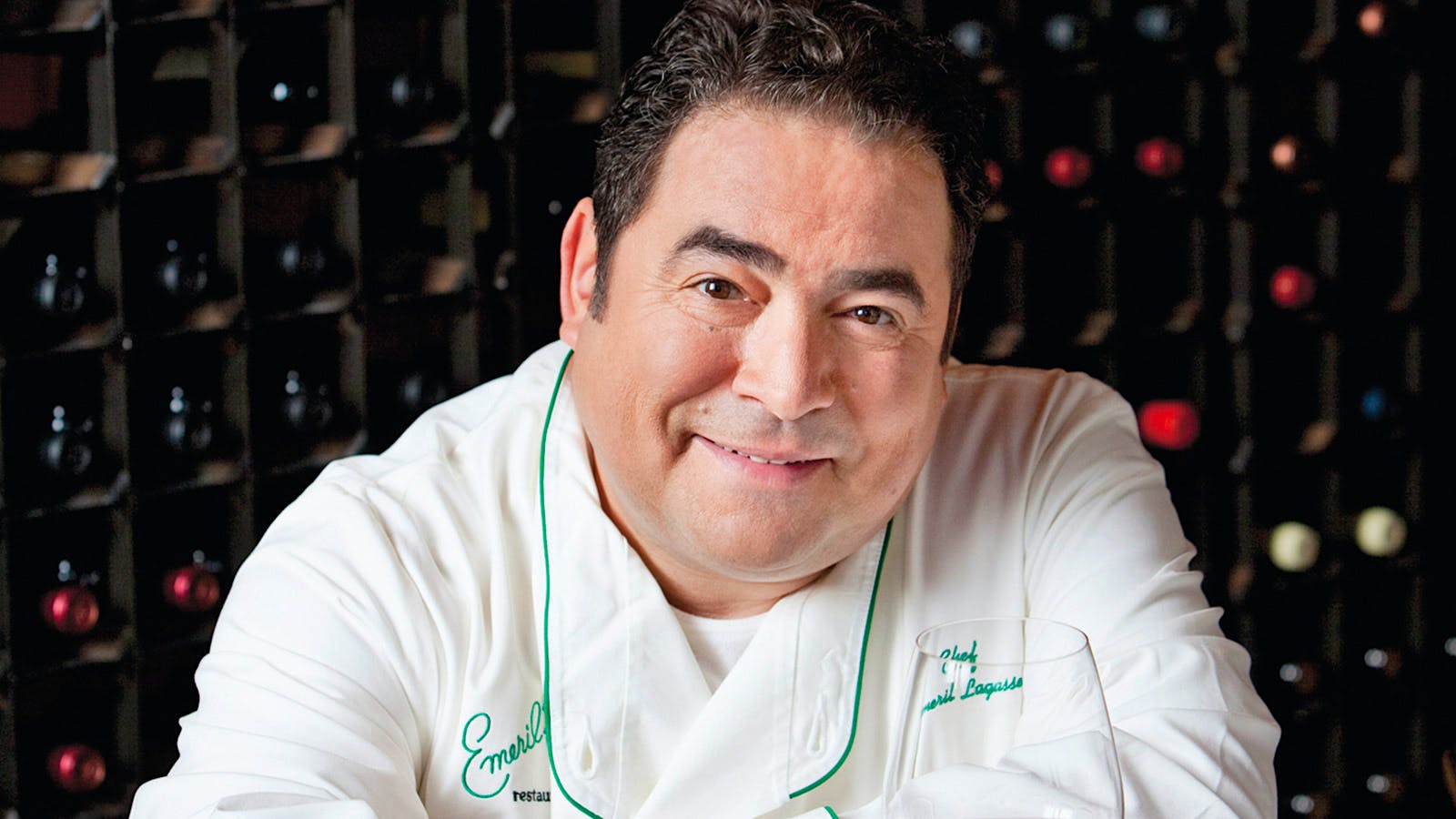 Chef Emeril Lagasse got his start at New Orleans’ Grand Award–winning Commander's Palace before opening his namesake restaurant in 1990, itself a Grand Award winner since 1999. He's traveled the world for his much-loved TV series Eat the World with Emeril Lagasse and The Originals with Emeril, and headed other shows like Fresh Food Fast. At Emeril's New Orleans, enjoy the chef's renowned New Orleans cuisine like stuffed clams, house-made Andouille and boudin sausages and the expansive wine list overseen by general manager Ray Gumpert that takes a deep dive into California and provides strong selections from France and Italy, especially Burgundy, the Rhône and Bordeaux. 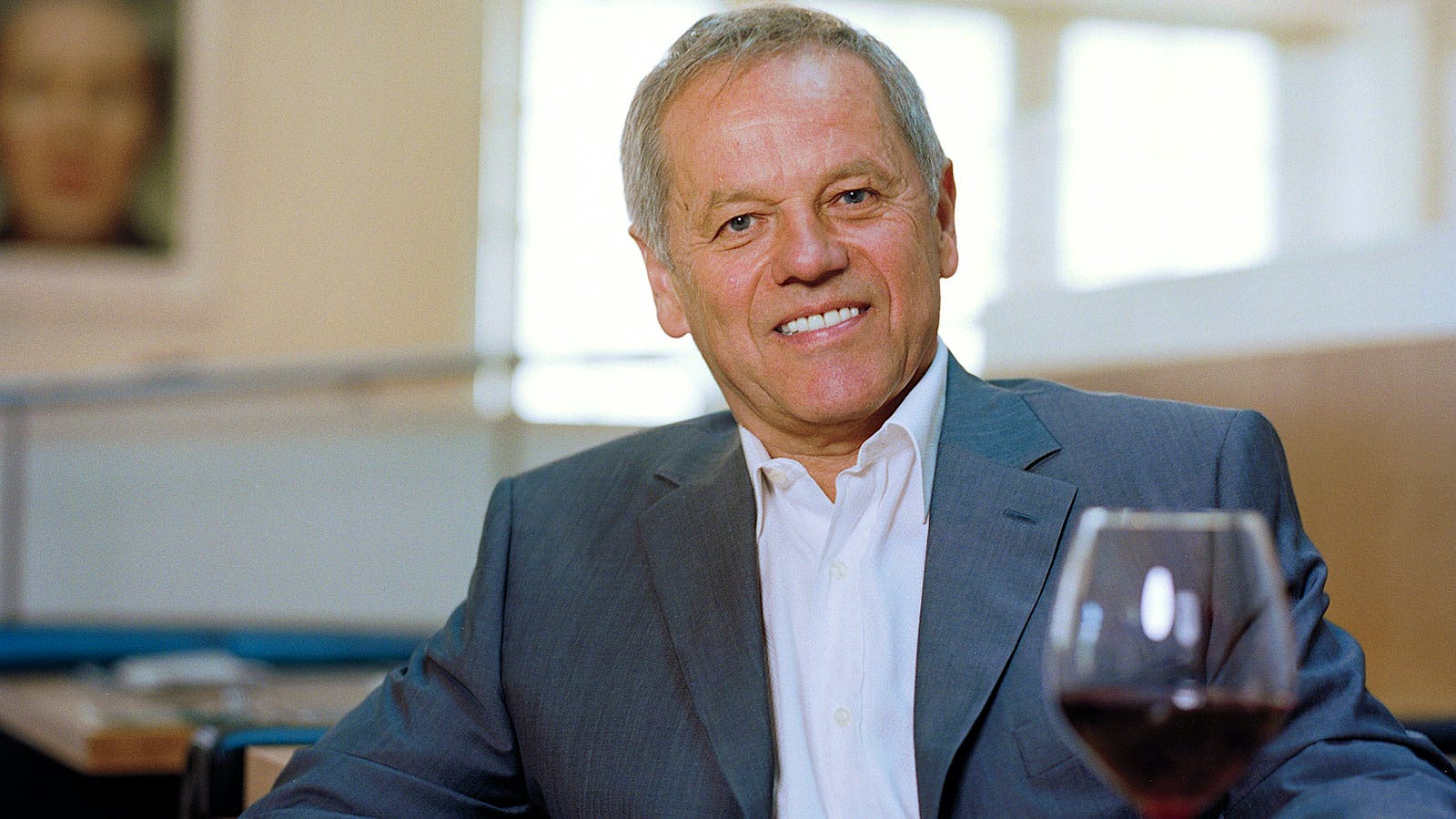 Along with the Grand Award–winning Spago Beverly Hills, Austria-born chef Wolfgang Puck owns restaurants all over the world. On screen he's best known for his work on Cooking with Wolfgang Puck (back in 1987) and, more recently, Top Chef and Top Chef Duels. In the dining room of Spago, he highlights regional cuisine in dishes like Santa Barbara uni with soft-scrambled egg and ricotta gnocchi with veal ragout, and a 3,000-selection wine list, with the help of wine director Phillip Dunn. All the heavy hitters are here, with strengths in California, Burgundy, Italy, the Rhône, Bordeaux, Germany and Champagne. 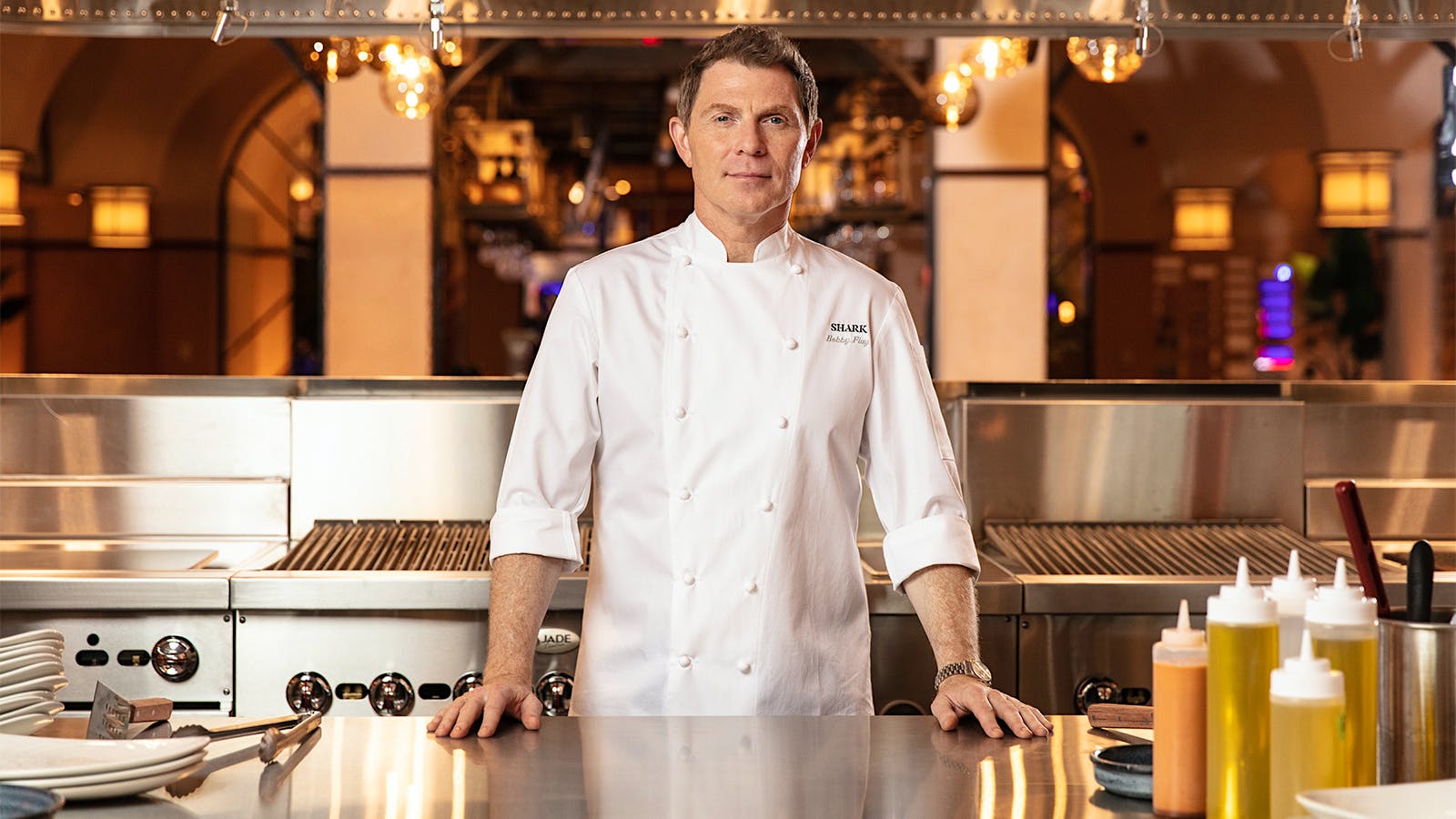 Since debuting on Food Network in 1994, chef Bobby Flay has continuously hosted programs that bring cooking tips and information on American regional fare to a national audience. But what about wine? Bobby Flay Steak in Atlantic City, N.J., celebrates wines from California, Italy and the classic French regions of Burgundy and Bordeaux to pair with steak-house favorites like prime rib with Béarnaise butter. Sommelier Sabrina Schatz' program also offers plenty of Spanish and Rhône picks. 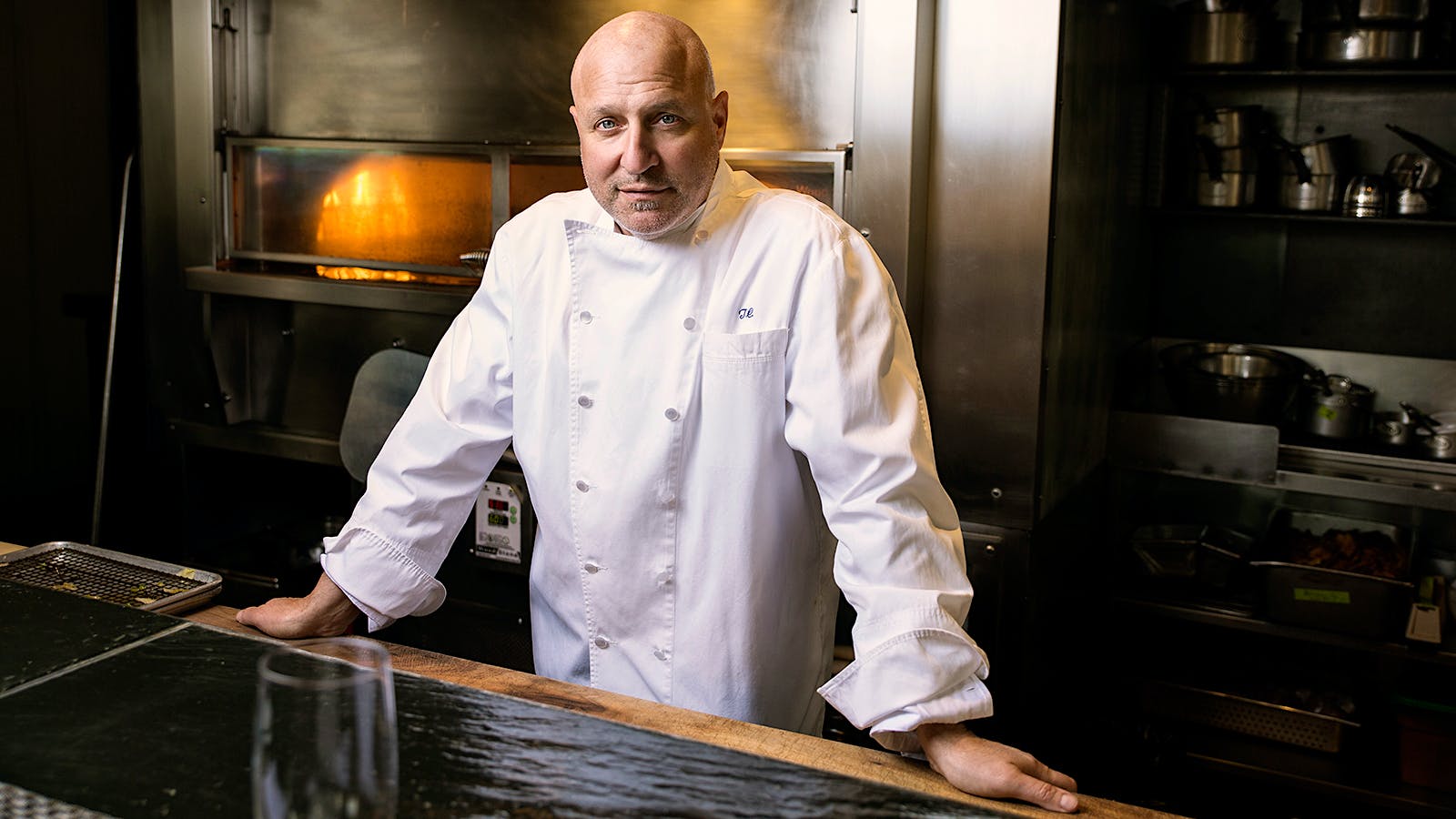 Not only has New York based restaurateur Tom Colicchio been a judge on Top Chef and Best New Restaurant, he's been a vocal advocate of healthy eating, encouraging discussion about topics like GMO labeling and sustainability. His Best of Award of Excellence–winning Craft is the flagship of his culinary empire. The dining focuses on seasonal ingredients served family style, while the wine, overseen by beverage director Brooks Fraser, focuses on France (especially Burgundy), California and Italy. The extravagant Champagne selection is highlighted every Monday with half-off bottle offerings. 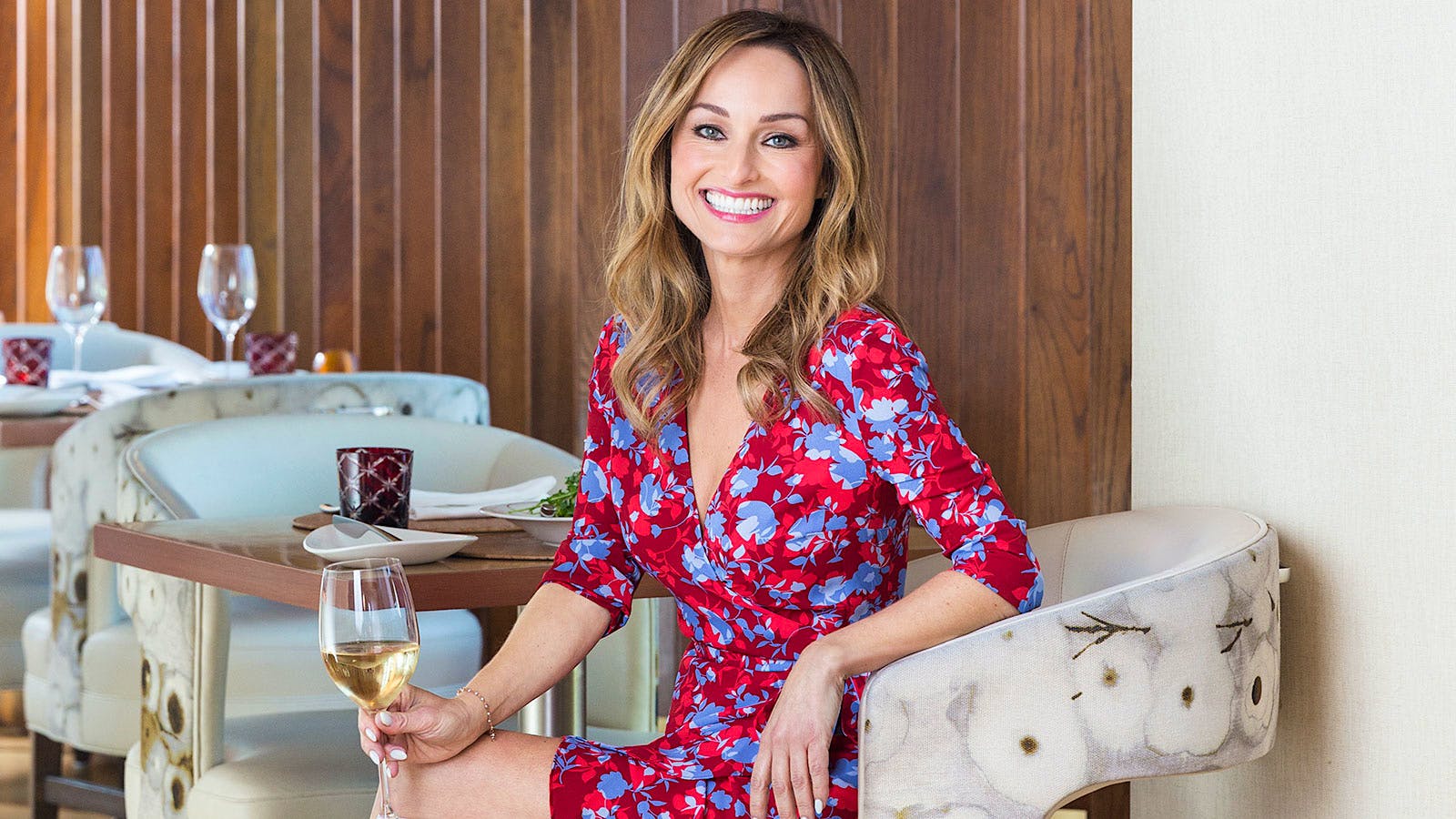 If you head to the glittering city of Las Vegas, a meal at Best of Award of Excellence–winning Giada is an enticing option. Italy-born Giada de Laurentiis is a skilled chef and sparkling personality as host of the Food Network TV program Giada at Home, as well as spinoffs like Giada in Italy and Giada on the Beach. The cuisine at her restaurant offers Italian flavors with California influences, while head sommelier James Bremner oversees a wine list with 450 selections driven by regions in Italy, France and California.

A fiery nature dictates the British chef Gordon Ramsay's on-screen demeanor in the series Hell's Kitchen, both here in the U.S. and across the pond. But dining at his Gordon Ramsay Steak, which has a Best of Award of Excellence for its wine list, is a more light-hearted affair. At the restaurant located in the Paris Las Vegas hotel, feast on British classics like beef wellington and sticky toffee pudding. Ramsay works with wine director Jeff Eichelberger, who oversees a wine list of 500 selections and manages an inventory of 12,500 bottles. Expect excellence in wines from California, France and Italy. 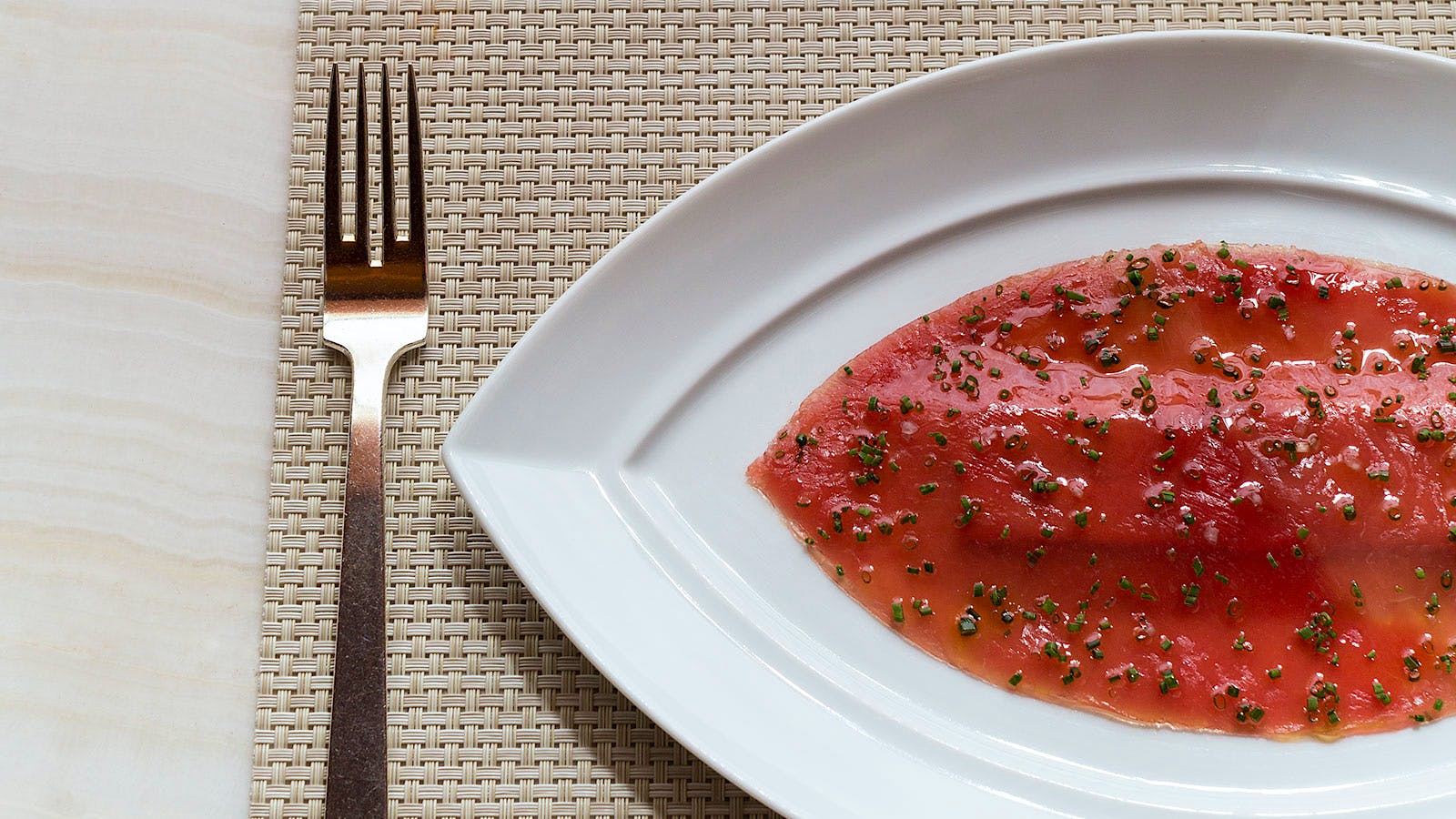 "There’s no such thing as a great meal without wine,” says chef Eric Ripert in his TV series Avec Eric, a three-season show that’s now available on Netflix. The French chef travels the world in search of inspiration, and that passion is on display at the seafood-centric Best of Award of Excellence–winning Le Bernardin in New York. Wine director Aldo Sohm, who runs a namesake wine bar of his own next door, manages the 1,000-selection wine list. Look for wines from top regions like Burgundy, Bordeaux, Germany, California and Champagne, with a strong Austrian presence as well. 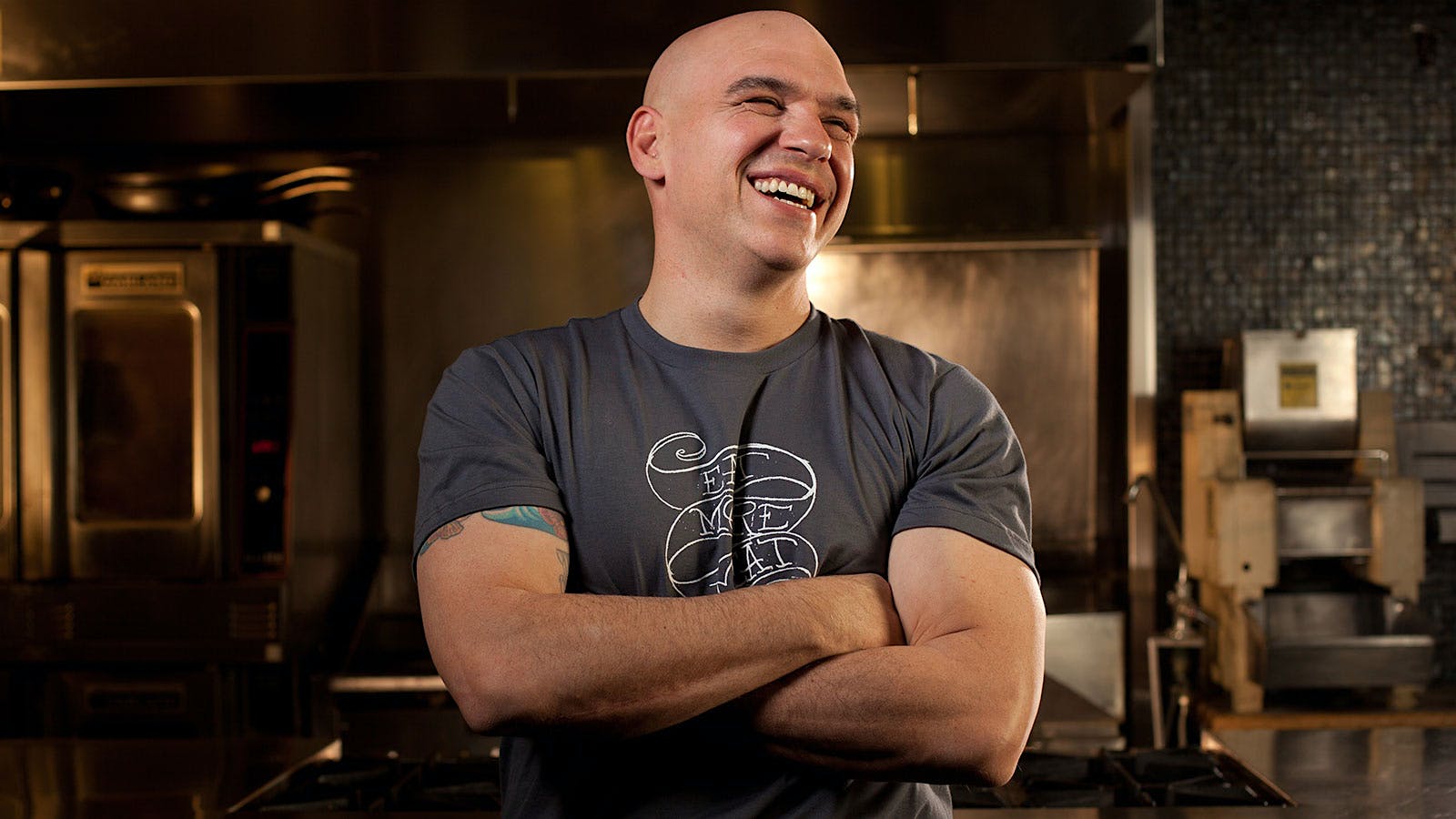 Chef Michael Symon has been serving food in Cleveland since 1997 and today is credited with helping breathe new life into the city's growing dining scene. You'll also find Symon cohosting The Chew and appearing on Food Network shows like Iron Chef America. His trademark fare goes for exuberant flavors, and his bistro Lola showcases its Best of Award of Excellence–winning wine cellar behind a sleek glass wall in the dining room. Managed by wine director Brian Deibel, the 415 selections are moderately priced and focused on California, France and Italy. 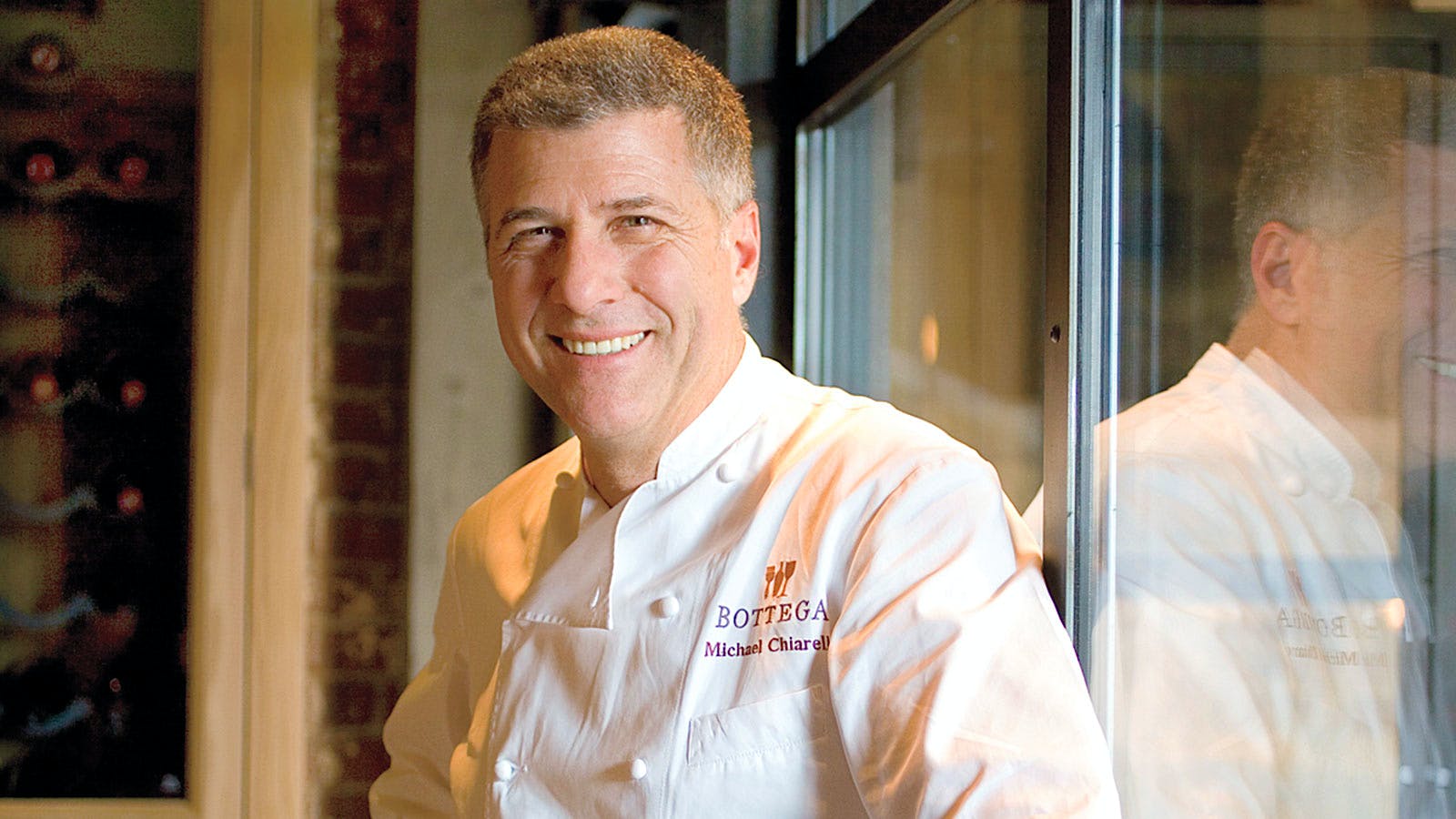 Stationed in Chicago, chef Rick Bayless is a standard-bearer for authentic Mexican cuisine. His long-running PBS series, Mexico: One Plate at a Time, explores the intricacies of the country's cuisine, and his restaurants Frontera Grill and Topolobampo feature rich flavors of Latin America. Jill Gubesch, wine director of the Award of Excellence–winning wine cellar, presents 250 selections from France, California and, of course, Mexico. 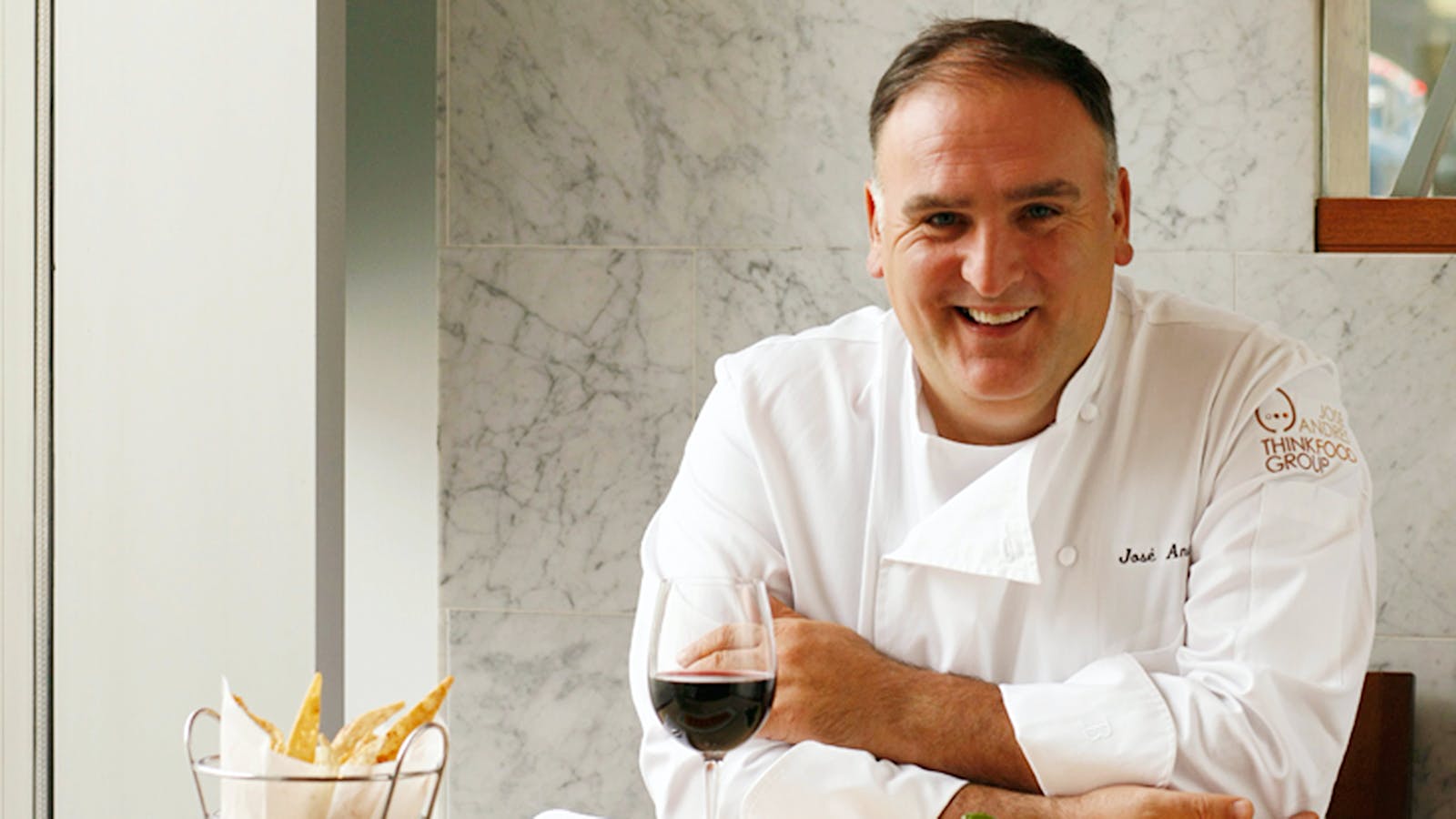 "I want to show you how to bring the taste of Spain into your kitchen." That's the vision behind superstar chef José Andrés' former PBS TV show Made in Spain. Andrés’ ThinkFoodGroup now owns a slew of restaurants including Restaurant Award winners like Somni, several outposts of Jaleo, Zaytinya and others. At Minibar by José Andrés, the chef's colorful character shines through in the avant-garde cooking with adventurous wine pairings from the Award of Excellence–winning wine list managed by wine director Andy Myers.