In 1966, Venice's infamous acqua alta floods all but destroyed winegrowing in the area. This week, the daring vintners who brought viticulture back had to brave the waves again—the highest tide in half a century. Tuesday's floods not only brought the city to its knees, but also threatened a decade-old project restoring winegrowing in the world’s most famous lagoon.

The acqua alta had risen 6 feet by Tuesday night, inundating landmark squares, churches and palazzos and causing hundreds of millions of dollars of damage. On the quiet off-island of Mazzorbo, the waters covered the walled 2-acre Venissa vineyard with dangerously salty brackish water. The Bisol family (of Prosecco renown) started the Venissa project knowing the risks, but had recently completed the harvest for its 10th vintage of the rare and expensive wine made from of the historic Venetian white grape Dorona.

“We may not know the damages until spring,” Matteo Bisol, Venissa’s general manager, told Unfiltered. The complex also includes a restaurant, osteria and guest rooms. Though the family has poured millions into Venissa, Bisol said that many island dwellers in the lagoon fared far worse: “A lot of people lost the entire ground floors of their homes.”

To help the community with emergency funds, Bisol announced it would open its family’s private cellars and sell six magnums of Venissa—two each of 2010 ($4,800 apiece) 2011 ($3,000), plus a 2014 ($1,100), with proceeds going to help families affected by the floods. “We will sell the bottles to the first collectors who ask for them,” said Bisol. Interested buyers can check out the sale on the Venissa website under the "Acqua Alta" thumbnail. —R.C.

Unfiltered readers may know man-about-France Jon Wyand for his stylish and evocative photos of vintners, vineyards and cellars that have graced the pages of none other than Wine Spectator over the years. Fans are in luck: His second book 4 Seasons in Côte Chalonnaise, has just been published, and in it he turns his lens to the rolling hills and villages just south of Burgundy’s famous Côte d’Or. The lesser-known côte's vines begin southwest of Chagny and continue south to Sercy. It's no less picturesque than its northerly neighbor: Once upon a time, among the Chalonnaise vineyards and farms, a man named Nicéphore Niépce snapped the first photographs—ever—in the 1820s. 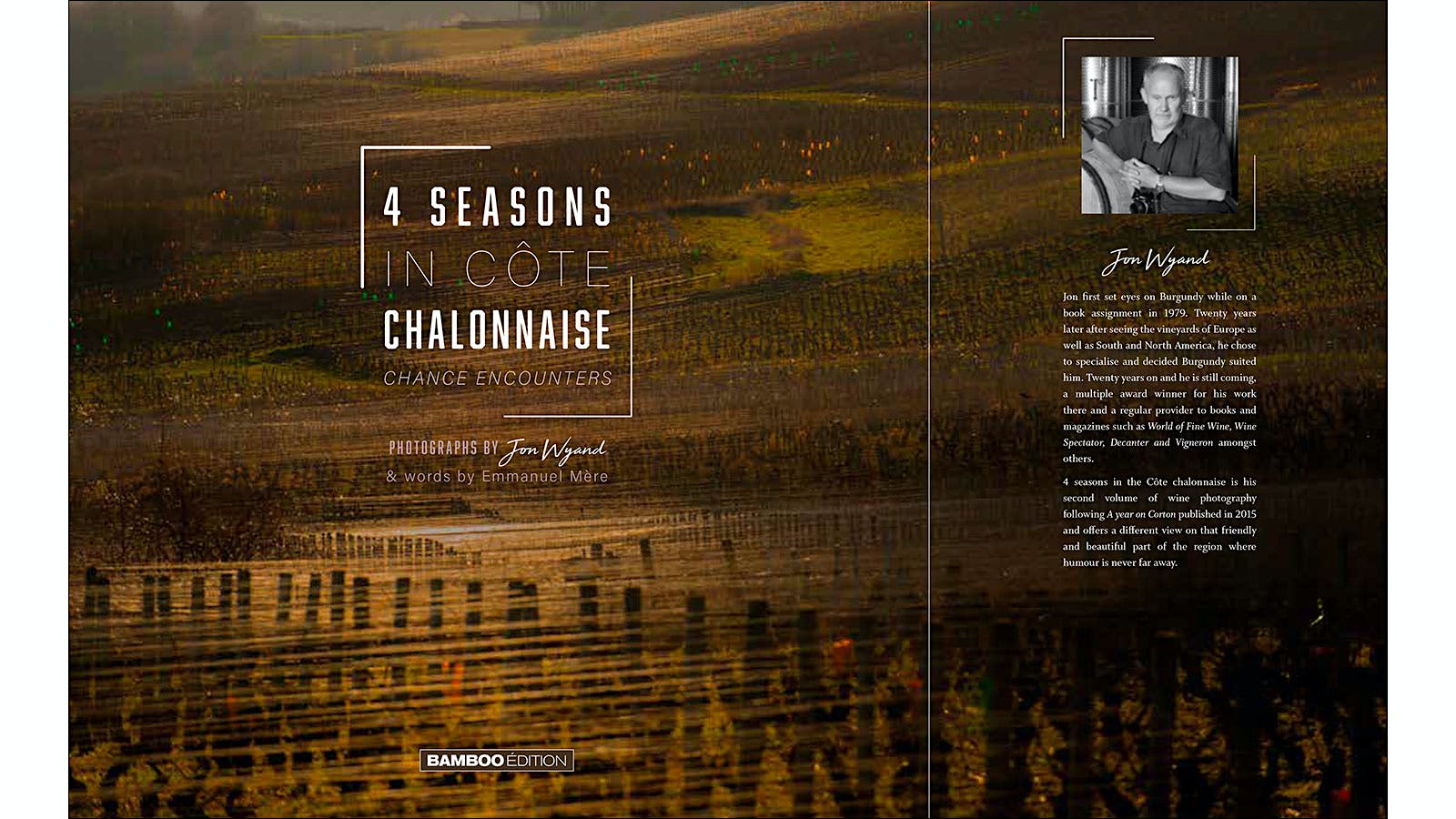 Wyand's own adventures in the medium take him through a year of vineyard activities, winemaking and village life, chronicling the details through the four seasons, from winter’s dormancy through autumn’s harvest frenzy and exhaustion. The accompanying text by Emmanuel Mère describes the five villages that make up the Côte Chalonnaise and its appellations and wines. Wyand’s photos bring the region to life: You can almost feel the crisp winter air, smell the freshly tilled vineyards and the wine aging in cellars, and hear the lively sounds of market day and the seasonal festivals.

Importantly, the book shines light on a region whose wines deserve greater recognition for their value and authenticity. In a world of ever more expensive red and white Burgundy, the Côte Chalonnaise offers Burgundy lovers a source of affordable wines. And photography lovers a very-long-recognized source of scenery.—B.S.