For a few years, the 1,590-liter, 2.6-ton, 9.8-foot überbottle had been the proud, record-breaking centerpiece of the dining room at Chinese restaurant Engel Wang Fu, in the Austrian town of Lustenau. Until late last month, that is, when its contents threatened to become a record-breaking red-wine spill after the behemoth began leaking profusely, with 200 liters on the floor in short order. It was an emergency demanding no fewer than six local firemen. Here's the drop-by-drop account of what went down (besides wine everywhere).

The gigantic custom-made bottle was filled in late 2016, and brought to the restaurant the following March, when its weight earned it a place in the record books, Rekord-Institut für Deutschland, specifically. Inside was a cuvée of Zweigelt from Burgenland winery Keringer in Mönchhof, a 2015 red called 100 Days. (Not intended as a countdown to disaster; it refers to the wine’s extensive maceration.) Winemaker Robert Keringer told us that the XXL-format bottle was valued at $111,000. 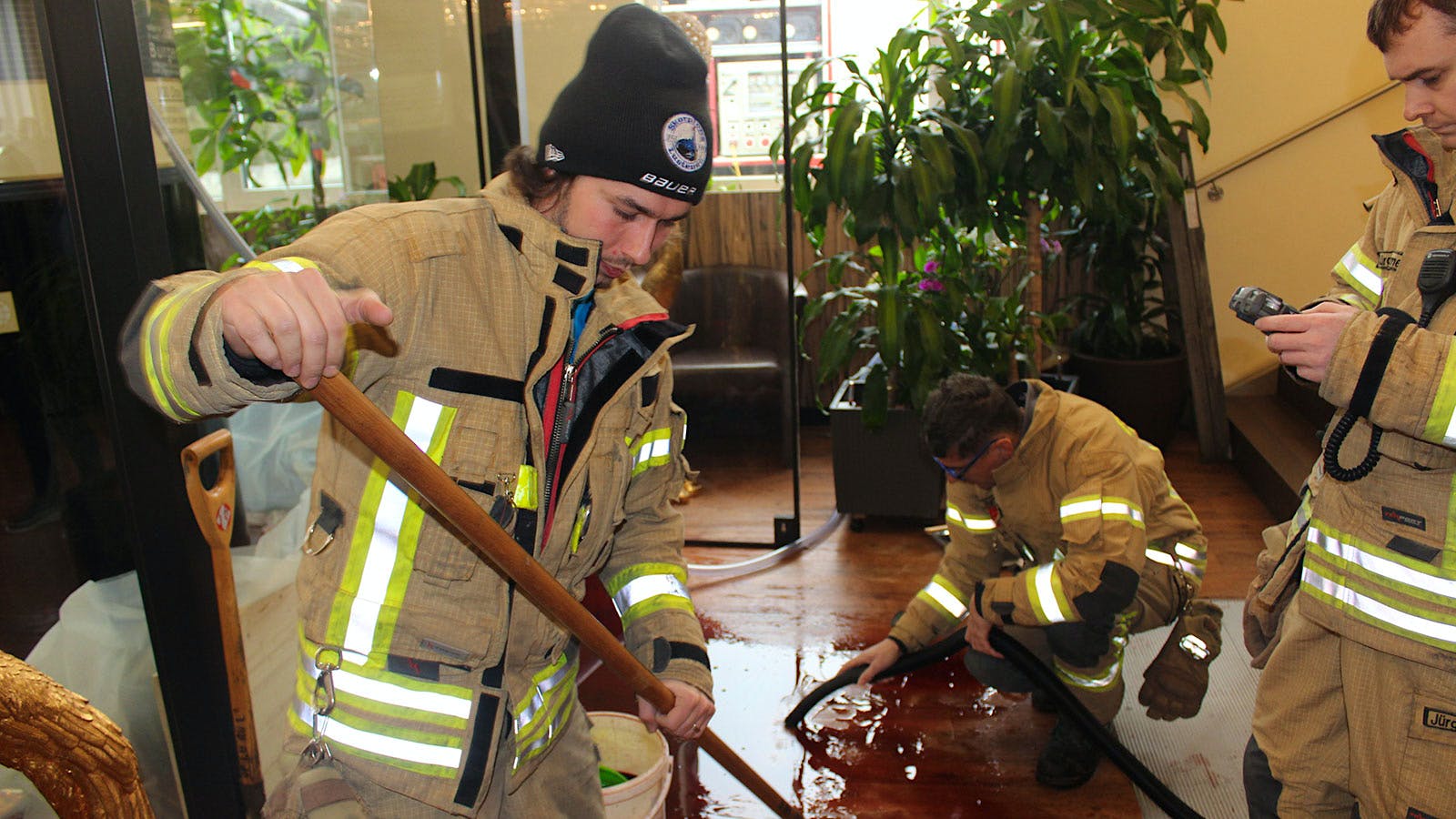 One, poured out: The firefighters clean up the wine that didn't make it. (Feuerwehr Lustenau (Lustenau Fire Department))

Jürgen Hämmerle of the Lustenau Fire Department told Unfiltered via email that the culprit behind the leak appears to have been a storage malfunction. The bottle was housed in a climate-controlled glass chamber, but Hämmerle thinks a power failure shut off the cooler, warming the wine. As science tells us, that means trouble when the liquid expands up into the neck and against the cork—and out over the lip. “When we first arrived,” Hämmerle explained, “it was not clear where the bottle was leaking [from] or whether it was cracked.” Adding a note of danger to the situation, “it was also not clear whether the bottle could burst due to a suspected crack.”

Acting quickly, the firemen buttressed the glass chamber with sandbags. One grabbed a wine key—in this case, an industrial-duty spiral auger drill—to pierce the enormous cork and start, well, emptying the bottle. The crack team saved the remaining 1,360 liters of wine from the compromised bottle, pumping it through food-safe hoses and into storage barrels pressurized with nitrogen, then cleaned up the puddle. And so, three hours after the firemen were called, the situation had come to a smooth, satisfying finish.

The rescued barrels of Zweigelt were sent back to the winery for laboratory testing and, in a happy twist, deemed fit for consumption. “From the beginning, the filled wine was intended as charity wine. We would like to continue to stand by this promise, and the saved wine is now (carefully and professionally) filled into [750ml] bottles,” said Keringer, to be sold by the glass at an upcoming event. The fate of the gigantic bottle has so far eluded us, but we presume a squad of Austria's most intrepid recycle-men is on the case.