This one's for all you placomusophiles out there. That (as you know) is the charming, incredibly specific designation for collectors and all-around connoisseurs of the little metal caps that sit atop the corks on bottles of sparkling wine, guarding them from effervescent disaster. They're called plaques de muselet by the French, and there are perhaps no aficionados of these little guys more ardent than Champagne winemaker Bernard Launois and artist Christian Marillier. Last weekend, at the biennial Mondial de la Capsule gathering of plaque folk, they unveiled a huge 39-foot by 10-foot "fresco" painstakingly composed entirely of caps—37,440 of them.

Both men have been decades-long devotees of all things cap. “I have been collecting [wire caps] since the 1980s,” Launois, of Champagne Launois Père et Fils in Mesnil-sur-Oger, told Unfiltered via email. Marillier has nurtured his collection since 2000, with his stash numbering around 60,000 caps. By 2008, Marillier had started fashioning portraits with them, and in 2013 he met Launois, who was looking to create a distinct art centerpiece for the museum at his family's winery. 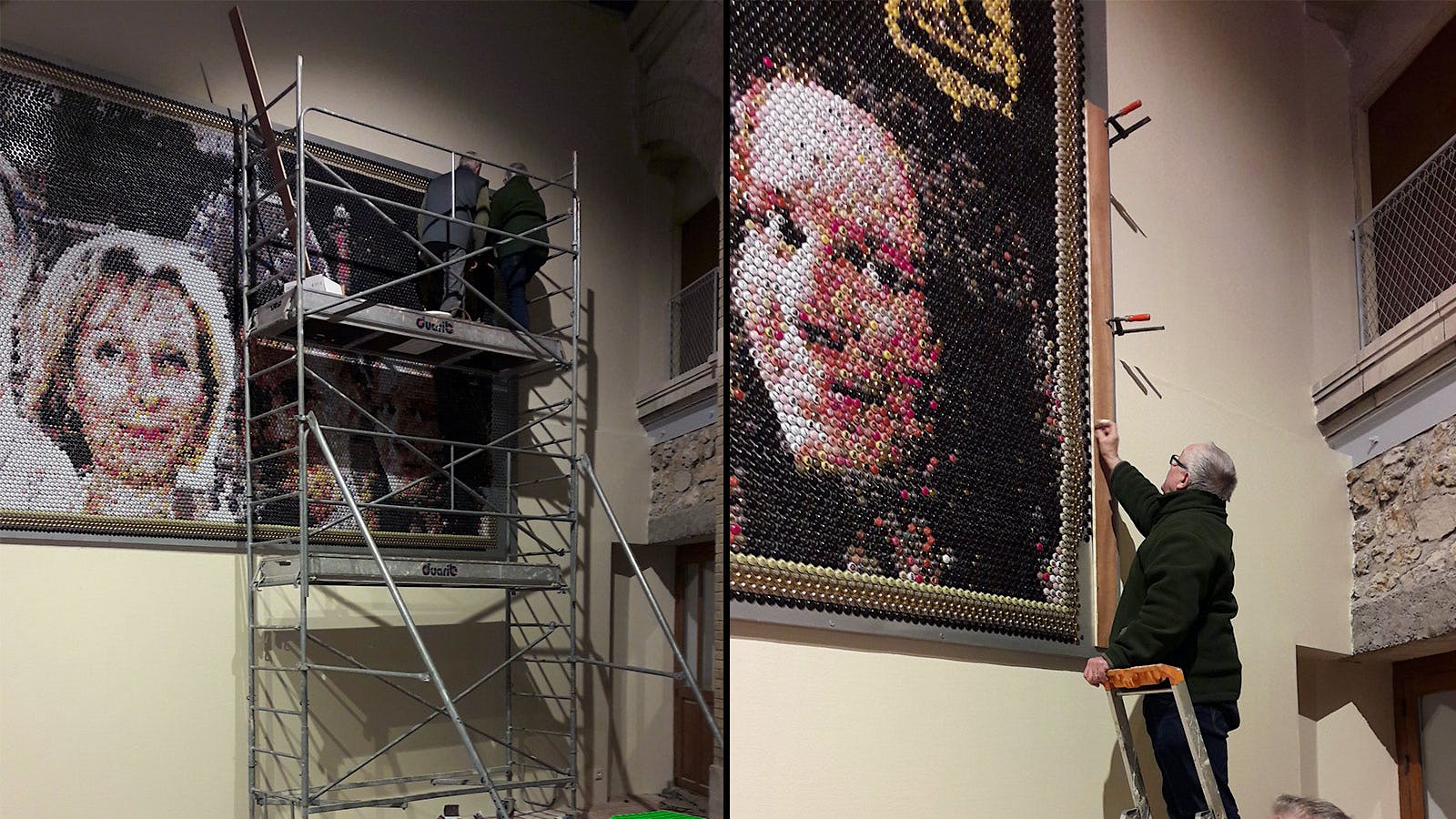 The artists put the pieces together. (Courtesy of Christian Marillier)

Over the course of six years, the pair planned the work’s subject and logistics, calculating the necessary colors and numbers of caps. Things popped into action in December of last year, as a team of four people labored for more than two months to assemble the 37,440 caps, each held in place by an individual magnet. “It will never be moved,” Launois noted. “The room was made specially for the fresco.”

The capsules themselves had to be designed specifically for the project. “We thought of using the muselet plates from our collection,” Marillier explained. “Unfortunately … we lacked frank colors in large quantities.” So, 160 new cap designs were commissioned and fashioned into the display, a family portrait of the Launois clan, with Bernard and his wife, Dany, at the center, between their daughters and their own families.

Placomusophiles take their calling very seriously. “It is the valorization of the muselet," mused Launois. "It is a passion for the collectors … It is art, imagination, a desire.” There are experts that rate the quality of collected caps, and there's money in the game: Marillier said he once saw a 1923 Pol Roger plaque fetch €4,360. According to Marillier, there are currently over 100 placomusophilia organizations in France and the Benelux region; at the Mondial, some 300 plakkies flashed cap collections, art, even jewelry. We think it's high time to ready the sabers and christen a club here in the U.S.A.

Champagne Pommery president and CEO Nathalie Vranken was back in her happy place this past week, holding court at the Pommery Champagne bar at the Armory Show art fair in New York. Once again Vranken was part of a three-person jury responsible for selecting the recipient of the $20,000 Pommery Prize, which also comes with the opportunity to create a new work for exhibition at Pommery Champagne’s domaine in Reims, France. (The other judges this year were Storm King Art Center senior curator Nora Lawrence and Palais de Tokyo president Emma Lavigne.) The winner was selected from the artists participating in the fair's Platform section, which asked exhibitors "to consider how techniques of satire and caricature have been used historically in art and literature as sharp tools of social critique."

This year's winner is artist Christine Wang, represented by Los Angeles' Night Gallery, for her series called Meme Paintings, which included a large painting of two women dancing on a sinking boat; in traditional meme fashion, the women are labeled with the white block text "Americans," while the boat is labeled "America." While the Armory Show, which annually hosts about 50,000 visitors from more than 30 countries, went off without a hitch despite coronavirus concerns, we can't help but think we're all in the same boat now …