Katie Button was well on her way to an academic career in neuroscience when she realized she was miserable. She had been laboring for years under the logic that "you just keep studying, and eventually you'll be so overqualified that you'll have a job and everything will be fine." But on the precipice of beginning a Ph.D. program with the National Institutes of Health, Button's dissatisfaction bubbled over and she quit.

The daughter of a caterer, she was drawn to food service and landed a front-of-house job at Minibar, José Andrés' Wine Spectator Award of Excellence–winning temple to molecular gastronomy in Washington, D.C. That begat a second gig, with Ferran Adrià at his avant garde destination El Bulli in Catalonia, Spain.

"I suddenly got exposed to a whole world where food meets science, and that was intriguing for me," Button says. "I was the girl who wasn't afraid to grab gloves and work with the liquid nitrogen."

It didn't hurt that she had a science background, but equally important were her optimistic vim and vigor. "I know that in the end, everything's going to be okay," she says. "It doesn't mean that I don't freak out in the moment of making a big change and stress over it. But I think it allows me to take more risks, that lack of fear."

While at Minibar, Button met her husband and business partner, Spain native Felix Meana. When the couple moved to Asheville, N.C., in 2011 to found Katie Button Restaurants, they left haute cuisine behind. "While I love molecular gastronomy and think all the things that we were doing were fascinating, not all of them were delicious," Button reflects. On any given night of the week, she suspects, even the greatest devotee of edible foams and gels has little appetite for the art of the culinary surprise. Rather, they want to be comforted: "They want to sit at the bar and eat patatas bravas." So the couple opened their first restaurant, Cúrate, as a casual spot for tapas and Spanish wines.

The dish shown here, a butter-basted rib eye with roasted radicchio that Button frequently makes at home, features two of her favorite flavors: rosemary and garlic. "Spain is a dry climate, particularly in the Priorat region, and you see rosemary growing everywhere," she says. "The air kind of smells like it."

Meana pulls Cims de Porrera's powerful Priorat Classic 2004 for the meal. Of the 15-year-old wine, Meana says, "It's a much softer version, with a better balance of balsamic, herbal and spice notes, and the black fruit is more settled." Button loves the way the dish coaxes out the wine's aromatics: "If you have that trinity of butter and herbs and beef, that's when I think you get the best experience." 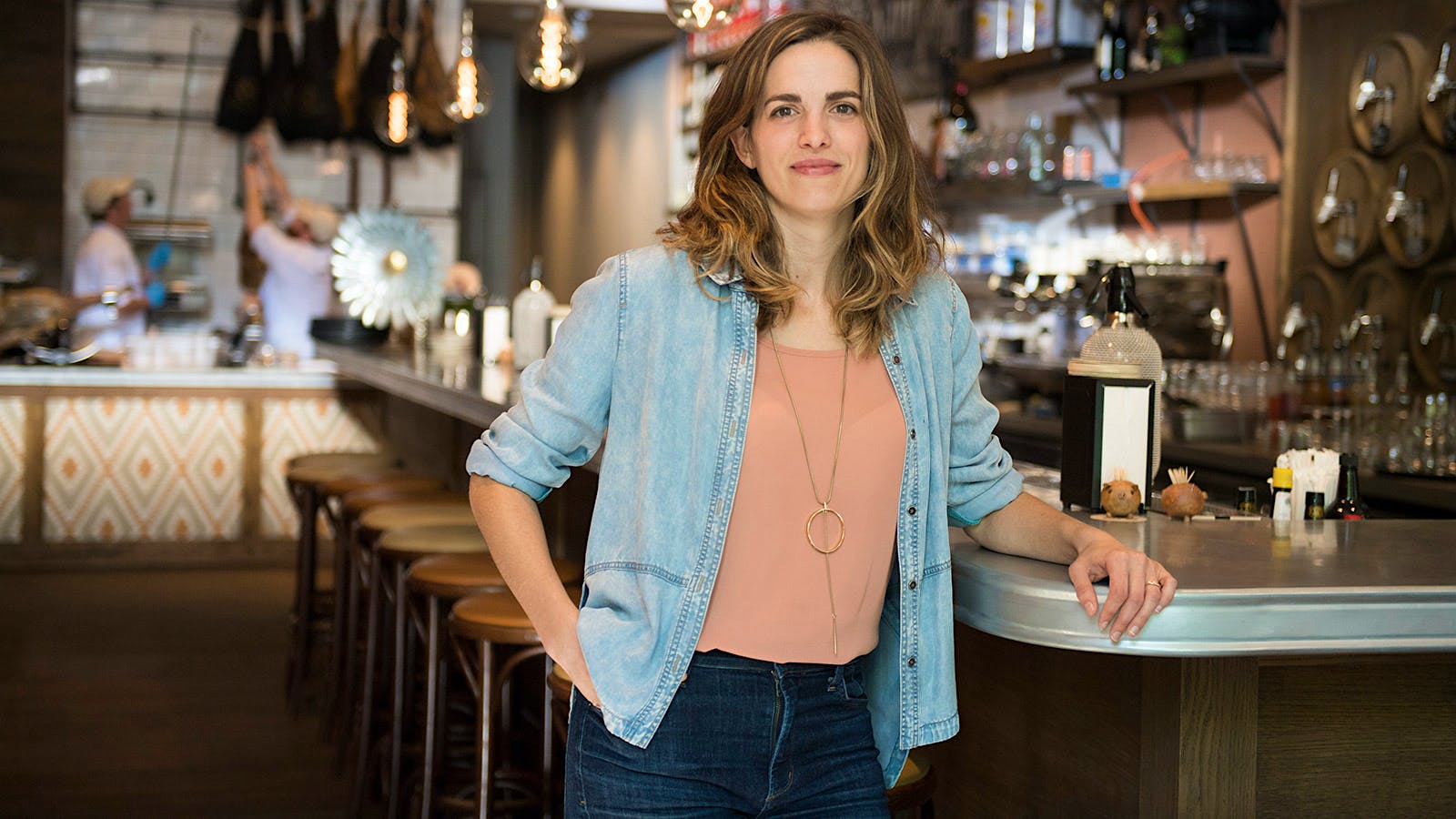 It doesn’t take much more than a big dose of butter and a smidge of technique to create this easy, evergreen recipe. Button and Meana cook this meal often when “we’ve just finished a crazy week and we want to treat ourselves, but we don’t want to go out,” Button says. The side dish changes with the seasons; roasted radicchio with a splash of Sherry vinegar is lovely for fall and winter. Steak, butter and herbs come together quickly with a strong side dish and a good bottle of wine for a fancy meal that you might order when dining out but that doesn’t take much effort, planning or special shopping to throw together on your own. Read on for Button’s tips.

Pairing Tip: Why a Spanish Red Works with This Dish

This buttery steak with garlic and rosemary cries out for a big wine with herbed aromatics. A red from Spain, where rosemary and garlic proliferate, is a great choice, and Priorat, with its mix of black fruit, mineral and herb notes, is an especially good match.

For even more wine pairing options, WineSpectator.com members can find other recently rated Priorat reds in our Wine Ratings Search.

1. About 1 hour before you plan to cook, remove the steak from the refrigerator and set out at room temperature.

2. Preheat the oven to 400º F. Place radicchio in a bowl, drizzle with olive oil and season with salt and pepper. Toss to coat, then transfer to a baking sheet, with a cut side of each wedge facing down. Transfer to the oven and roast until wilted, about 10 minutes. Turn each wedge and continue roasting until tender and charred, about 8 minutes more. Set aside.

3. Just before cooking, season the steak on all sides liberally with salt and pepper. Add the cooking oil to a cast-iron skillet large enough to hold the steak, and set pan over medium-high heat. When the oil is shimmering, add the steak and sear it briefly, about 1 minute per side, until well-browned. Add the butter, rosemary and garlic to the side of the pan.

4. When the butter has melted and is beginning to foam, lower the temperature to medium. Carefully tilt the pan toward you by pushing down on the handle, and use a large spoon to scoop up the foaming butter and redistribute it evenly over the steak. After about 1 minute, flip the steak away from you, then continue basting. If the butter turns dark brown before the steak is done, add more butter, 1 tablespoon at a time, to cool the mixture slightly. Repeat this process, flipping and basting the steak, until the meat has begun to tighten. Test for doneness by pressing on the steak; at medium-rare, it should feel firm and press back, and an instant-read thermometer inserted into the thickest part of the steak should register 130º F. Transfer the steak to a cutting board and tent with foil. Let rest for 5 to 10 minutes.

5. Drizzle the Sherry vinegar and some olive oil over the radicchio. Slice the steak and pour the pan juices and caramelized garlic over it. Serves 2 to 3.