The Port of Houston is one of the nation’s largest, second in volume only to that of southern Louisiana. Along with the freight that passes through Houston’s docks, myriad cultures have filtered into the city. This diversity is on vivid display in the local food scene, where, alongside Tex-Mex, barbecue and steak, there are options for Vietnamese pho; kolaches, the Tex-Czech filled bread specialty; Cajun po’ boys; Mexican tamales; and Bavarian sausage.

In 2015, when restaurateur Ford Fry pitched chef Bobby Matos on his idea of opening a neighborhood spot that would showcase many of the city’s cuisines on the same seasonal menu, “I thought he was high,” Matos says. Yet five years on, State of Grace is serving happy customers a steady diet of gumbo, cacio e pepe, Oaxacan queso, Spanish grilled octopus, German schnitzel and Nashville hot chicken.

Is there a common thread tying together this culinary patchwork? To Matos, the sense of freedom that State of Grace inspires might be that unifier: “Maybe it’s the choices that hold it together,” he reflects. Recently, a couple came in and ordered a cheese enchilada and 2 ounces of caviar. “That’s the weirdest combination I’ve ever heard of,” he says. “But whatever makes you happy, you know?”

As a chef, Matos enjoys putting “a little intrigue into something that’s really quite simple.” That approach is on vibrant display in the wintry roasted oyster dish shown here. The Japanese seasonings togarashi (a dried chile blend) and furikake (dried fish flakes and seaweed) are spun into butter along with Parmesan, garlic, parsley, lemon zest and sea salt. Oysters on the half shell are topped with the butter, then cooked until it is melted and bubbling.

“I think there’s a lot of potential in playing on those aromatics,” observes general manager Matt Crawford, who pairs the dish with a Grüner Veltliner from the restaurant’s list, which holds a Wine Spectator Award of Excellence. His choice, Knoll’s Loibenberg cuvée, bears the Wachau region’s highest of three quality designations, smaragd, which uses the ripest grapes available.

Though the grapes are vinified dry, their ripeness imbues the wine with a measure of depth that’s just right for these oysters, Crawford says. “[There’s] lots of richness, tons of flavor and intensity encapsulated in each one of these shells,” he notes. “You need a wine that’s not going to just limp into that, that can stand up to it, that really plays on those green herbaceous aromatics and savory components.” 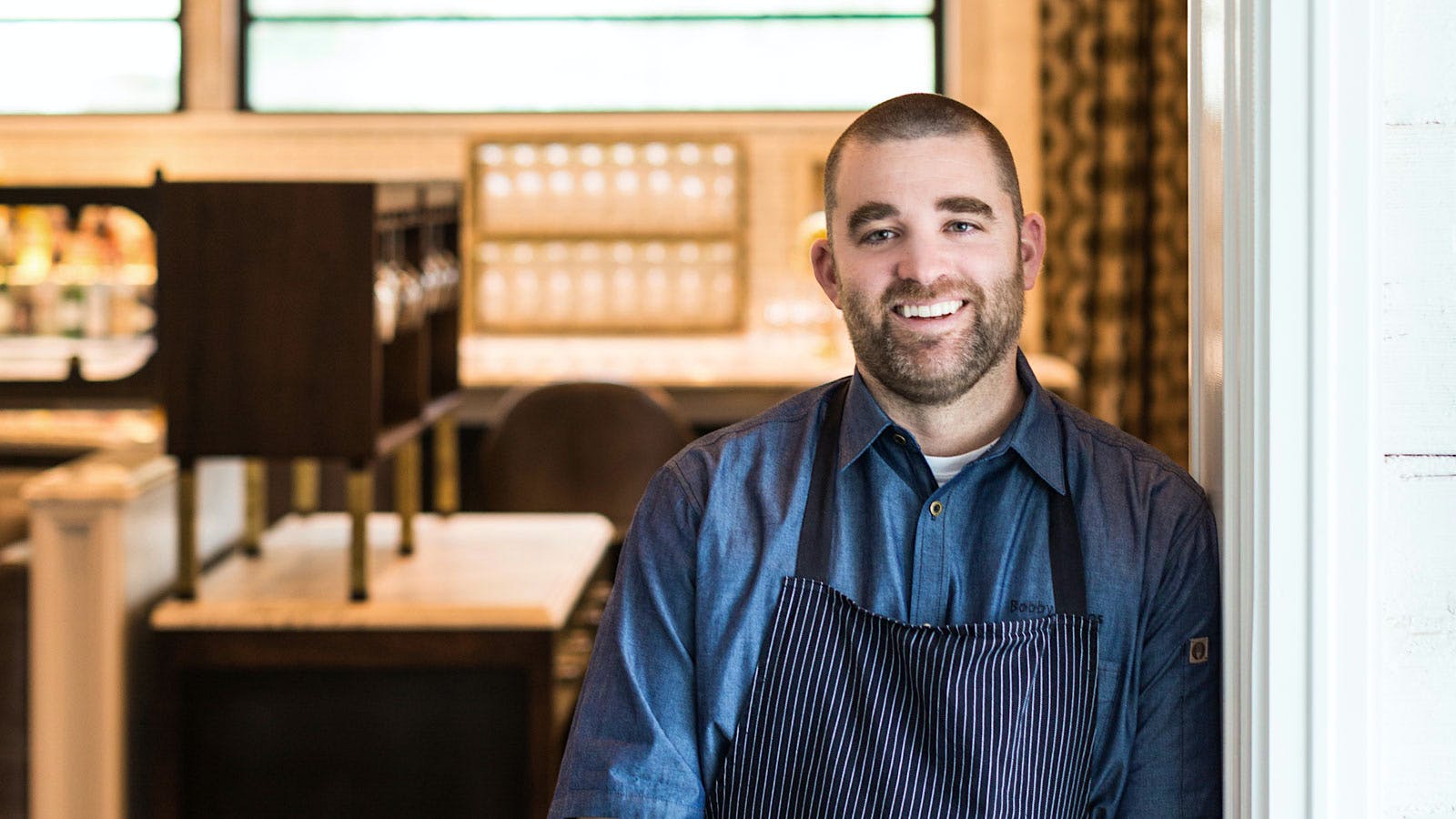 Oysters are at their plumpest and sweetest during the cooler months, and this roasted, buttery, citrusy preparation makes for a lip-smacking appetizer in cold weather. Read on for Matos’ tips on how to make these shellfish shine.

Pairing Tip: Why Grüner Veltliner Works with This Dish

These buttery, briny, herb-flecked oysters call for a white wine that balances fruit flavors with mineral, herb and spice notes, offering a hint of richness to match the weight of the butter and oyster meat. A fuller style of Grüner Veltliner or an Albariño would be ideal; dry Alsace Riesling or white Bordeaux could also work.

1. Preheat the oven to 400° F. Heat a saucepan over medium-low and add a teaspoon of olive oil. Add the chopped garlic and cook, stirring occasionally, until just softened and fragrant. Set aside and let cool. In the bowl of a stand mixer fitted with the paddle attachment, beat the butter for approximately 2 minutes, until light and creamy (or stir vigorously in a mixing bowl). Add 1 cup Parmesan cheese along with the sautéed garlic, parsley, zest and juice of 2 lemons, 2 tablespoons furikake, togarashi and sea salt. Mix for approximately 1 minute, until well-combined.

2. Using aluminum foil or rock salt, line a good-quality, heavy sheet pan or casserole dish large enough to hold all of the oysters. If using foil, crinkle it so that the oysters can be nestled into it and secured in place.

3. Halve the 3 lemons. Heat the saucepan used to cook the garlic over high. Add the lemons, cut-side down, and cook until well-charred, 2 to 3 minutes.

4. If you bought whole oysters, rinse and scrub them, then steady an oyster, cupped-side down, with your nondominant hand, using a kitchen towel for grip. With the other hand, gently pry open the hinge using the tip of an oyster knife, then twist and rotate until the hinge pops open. Wipe the blade clean as needed. Taking care not to spill the liquor inside the shell, slice through the muscle that connects the oyster to the top shell. Remove and discard the shell, then sweep the blade between the oyster and the bottom shell to sever the lower muscle.

5. When all the oysters are shucked, top each with 1 to 1 1/2 tablespoons of the compound butter, depending on the size of the oysters, and carefully nestle them at roughly equal height into the rock salt or scrunched-up aluminum foil on the sheet pan. Transfer to oven and roast until the butter is melted and bubbling, about 4 minutes. Remove the pan from the oven and turn oven to broil. Top each oyster with a sprinkling of the remaining 1/2 cup Parmesan cheese and place under the broiler. Cook just until golden-brown, about 2 to 3 minutes.

6. Sprinkle the oysters with the remaining 2 tablespoons furikake and serve the roasted lemons and bread or crackers alongside. Serves 6 to 8 as an appetizer.