The Empire State was home to a confirmed 25,665 cases of COVID-19 as of March 24, the largest concentration in the United States. The closures and shutdowns in New York have had clear, rippling effects on the region's wineries.

"Needless to say, there's a lot of anxiety as to where we are and where we're going," Kareem Massoud, winemaker at Paumanok Vineyards and Palmer Vineyards and the recently elected president of the Long Island Wine Country trade organization, told Wine Spectator. "We've never faced anything like this. It's deeply troubling."

Nonetheless, Massoud is optimistic about local winemakers' response. "I think in any crisis there's a coming together of the community."

While winemakers throughout the state are continuing necessary vineyard tasks, such as pruning vines and tying canes, they're also facing a daunting degree of uncertainty. "We don't know what the next week or day will bring. Forecasts and planning have gone out the window," said Roman Roth of Long Island's Wölffer Estate. "Will the shutdown get more strict in a week or month from now?"

In the Finger Lakes, Shannon Brock of Silver Thread shared a similar sentiment. "I'm an optimist, so I'm confident there is a way through. There are just so many unknowns right now."

It's too early for New York wineries to know COVID-19's long-term effects on their finances. Wineries may face significant losses while they are unable to host on-premise tastings and private events for the foreseeable future. "Having to cancel events and cutting off the opportunity for wine tasting definitely affects sales, and of course visits to the winery," said Pindar Damianos of Pindar Vineyards.

Tasting room traffic is a particularly valuable source of income. "A good portion of our normal daily sales in the tasting house would usually include the experience of tasting our various wines," said Cutchogue winemaker Anthony Sannino of Sannino Vineyard.

With the mandated closure of New York's restaurants, wineries have lost another significant source of profits. Massoud reports that restaurants represented about a quarter of his business. "Our distributor is still operating, but mostly sells to NYC restaurants," said Brock. "That sales avenue is pretty dried up." Some wineries do have a significant retail presence, and they're being helped by rising retail sales.

Online sales have become crucial for all players. "Customers have been extremely supportive with online sales and drinking local wine, which means the world to us," said Chelsea Frankel of Long Island's Shinn Estate and Croteaux Vineyards. "It's the only thing that will keep us afloat over the next few months." 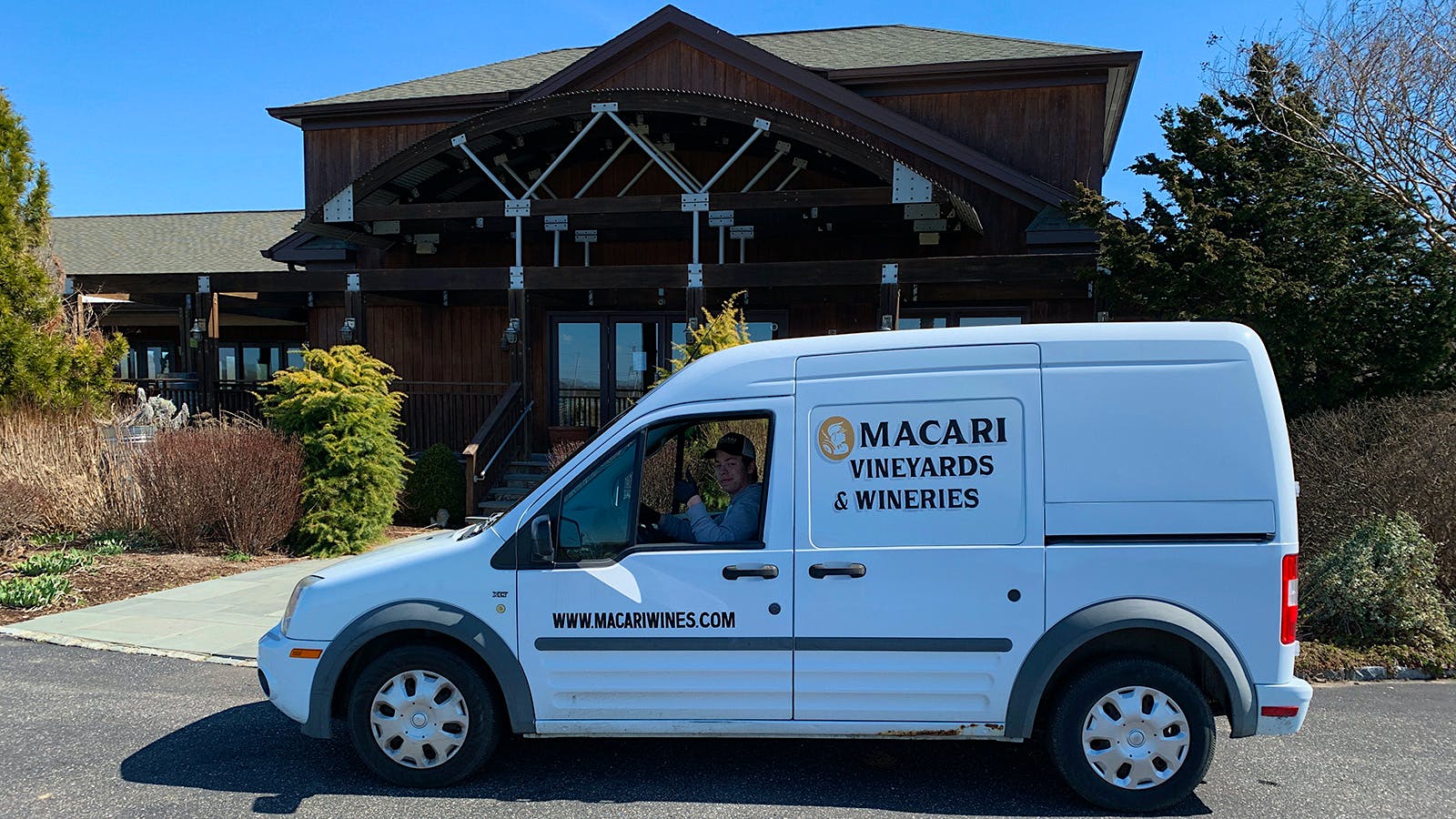 New York wineries like Macari are putting their sales efforts behind pickup and delivery orders. (Photo courtesy of Macari Vineyards)

As with New York's restaurant industry, the biggest concern after staying in business is taking care of staff. But with current and potential financial losses, keeping staff employed has not proven easy. "We've had to lay off two full-time tasting room employees," said Lieb Cellars general manager Ami Opisso.

For Massoud, things are progressing similarly. "We're down to basically just one staffer per day at each winery."

With all these factors, wineries are rapidly changing their methods of sales and marketing. There has been heightened focus on local orders and deliveries. "We offer curbside pick-up for people who don't want to come in," said Lisa Hallgren, co-owner of Ravines winery in the Finger Lakes.

Shelby Hearn, director of sales and marketing for Suhru Wines, says that their business has become exclusively web-based. And Opisso said that Lieb Cellars' e-commerce sales had increased tenfold over last year.

Gabriella Macari, director at Macari Wines, sees this as part of a larger movement. "With tasting rooms closed and the need to increase sales, producers have been forced to digitally modernize at a rapid pace," she said. To this end, Macari is increasing its online outreach, which will hopefully also support employees in vulnerable positions.

Some wineries are even considering holding digital tasting events, in order to maintain outreach. According to Brock, Silver Thread has already begun a series of virtual tastings on Facebook Live. Hallgren says they're planning a virtual tasting at the end of the month for Ravines.

Multiple winemakers indicated that this rapid digital development may be collectively positive for the industry. "I am optimistic that this will push New York wineries to embrace the digital age of wine sales," said Robin Epperson-McCarthy, co-founder of the Peconic area's Chronicle Wines. "Bigger wineries in more recognized regions have already made a major investment into online marketing. Focusing on e-commerce in addition to regional wine tourism [will allow] us to connect with both our local and national markets."

New York's winemakers remain largely positive. "I'm optimistic that we'll all get through this and one day look back on it with not only disbelief but a keen sense of community and gratitude," said Opisso.

Sannino noted the hardiness of New York's winemakers, a group "comprised of extremely resilient people. I believe it is because we are farmers, first, that are endlessly confronted with the challenges presented by Mother Nature."

The consensus is that the public can support them by making sure to "drink local," and buy from local wineries, directly when possible. On a larger scale, there are suggestions of direct government intervention in order to assist at this difficult hour. Macari suggests states encourage interstate shipping direct from wineries.

Efforts are already underway to support local winemakers throughout the United States, through local wine nights and tasting events. As winemakers plan for the future, and the wine community finds new means to support them, it seems that no one in the industry will have to face this hill alone.

—With reporting by James Molesworth.