Michael Broadbent, whose untiring passion and curiosity for wine helped build the modern wine auction market, has died in England. He was 92.

As senior director for Christie's fine wine department for 26 years and then a consultant for another 17 years, Broadbent built the London-based auction house into a major power broker in wine auctions, bringing new attention to the rare wine market. His work and his meticulous tasting methods made him a renowned expert in collectible wines.

"Michael was a pioneer and leader in the specialized world of fine wine auctions," said Marvin R. Shanken, editor and publisher of Wine Spectator . "He brought an elegant sophistication to the events he moderated at our Wine Experience gatherings, and earned our Distinguished Service Award in 1991. Michael was one of a kind."

John Michael Broadbent was born on May 2, 1927, in Yorkshire. He studied to be an architect but that didn't last. "It was after he was sitting exams in architecture that he decided it was not his cup of tea," his son, Bartholomew, a wine importer, told Wine Spectator. "His mother suggested he go into the wine business and that he did."

At the age of 25, he went to work in retail, first with Layton's and later with Harvey's of Bristol. Though his first tasks were sweeping the floors and making deliveries, he quickly developed a passion for wine, both its details but also its beauty. "He was a musician, an artist, and, I guess he loved wine for similar reasons," said Bartholomew.

After writing several letters to the chairman of Christie's, Broadbent was hired at age 39 to revive the auctioneer's wine division. Broadbent dove in with both feet, hunting down consignments in the cold, wet cellars of English manor houses. His work brought wine collecting new attention and helped spark the rapid rise of the auction market. 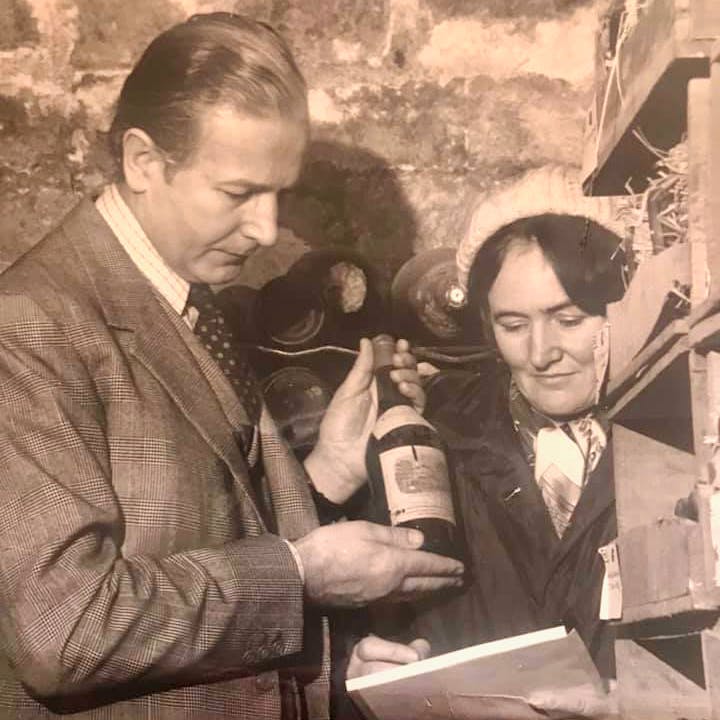 He was also present when controversy hit the market. In 1985, the German wine collector Hardy Rodenstock approached Broadbent about four bottles he claimed had been found inside a Paris wall, allegedly Bordeauxs dating to the late 18th century and, Rodenstock claimed, having been meant for Thomas Jefferson. Broadbent auctioned the first "Jefferson Bordeaux" for the equivalent of more than $150,000. Two decades later, research would cast serious doubts on the bottles' provenance and authenticity.

During his travels, Broadbent became an expert in old wines. He matched boundless enthusiasm with tireless attention to detail. On Sept. 13, 1952, his first boss, Tommy Layton, suggested that he write down his thoughts on a wine. Broadbent grabbed a little red notebook.

For most of his life, he kept detailed notes on every wine he tasted in a never ending series of these pocket-sized notebooks. His wife, Daphne, began typing them up, and Broadbent assembled them into a popular series of books. He also wrote a guide to tasting and was a respected lecturer and educator.

Even as he stepped back from his role at Christie's, Broadbent continued to write and lecture about wine well into his 80s. He seemed to enjoy every day in life, often beginning with some Champagne in his orange juice at breakfast and having a bit of Madeira before lunch.

He also remained dedicated to thinking about what he was drinking. "Critical tasting must be kept alive," Broadbent wrote in his guide to tasting, first published in 1968. "It would be a pity to allow man's finer perceptions of tasting experience (and resultant range of pleasures) to atrophy."

Broadbent is survived by his second wife, Valerie Smallwood, his son, his daughter Emma, who is the chief magistrate judge of England and Wales, and six grandchildren.