On the eve of opening Pasjoli in September, chef-owner Dave Beran exuded a focused calm. Never mind that a last-minute water issue had resulted in a gaping hole in the floor, delaying the opening by several days. Beran wasn't rattled. The show must go on. And it did.

Located in Santa Monica, Calif., the market-driven bistro is a new kind of show for Beran, who has spent the past 15 years at haute tasting-menu spots including Alinea in Chicago and his own Dialogue in Santa Monica. Beran likens those destinations' prix fixe format and minimal decor to a black-box theater production in which the spare setting keeps the audience's focus on the storyline—the menu—and whatever it might evoke.

An à la carte place, by contrast, with its carefully calibrated decor and soundtrack, resembles a movie set in which no atmospheric detail has gone unconsidered, but guests choose the plot points: the dishes that comprise the meal. "They're controlling their own storyline within all the parameters that we've created," Beran says.

Pasjoli's parameters are like a pen-and-ink sketch of a French bistro—high ceilings, clean lines and fat beams of light pouring onto graceful circles and rectangles—which suits Beran's pared-down California-French style of cooking. "The French food that I fell in love with was the produce-driven food," he says. "A plate of perfectly cooked chanterelles with just a little bit of butter and some fresh herbs. Or a great tomato with basil and salt and pepper and a little bit of olive oil."

The rack of lamb shown here is adapted from the opening menu. Its roots go back to Beran's time at Alinea, where chef-owner Grant Achatz once drew lamb with flavors of Bordeaux's Cabernet-dominant Pauillac region on his idea board. Later, at Achatz's restaurant Next, Beran riffed on that idea for a terroir-themed menu, creating a Northern Rhône–inspired lamb: smoked loin with prunes and olive jus to match the region's dark and savory style of Syrah.

Here, he's created a Southern Rhône lamb, paired with beverage director Daniel Lovig's choice of Domaine du Grand Bourjassot Gigondas Cuvée Cécile, from the 99-point 2016 vintage. "What I really enjoy about wine is how it can illuminate something else, like two flashlights shining on each other," Lovig says. To highlight the ripe, fruity character of the Grenache blend, the dish has a fleshier profile: roasted rather than smoked, with grapes rather than prunes and olive butter instead of olive jus. Roasted fennel and onions catch a glimmer of the wine's anise accent. 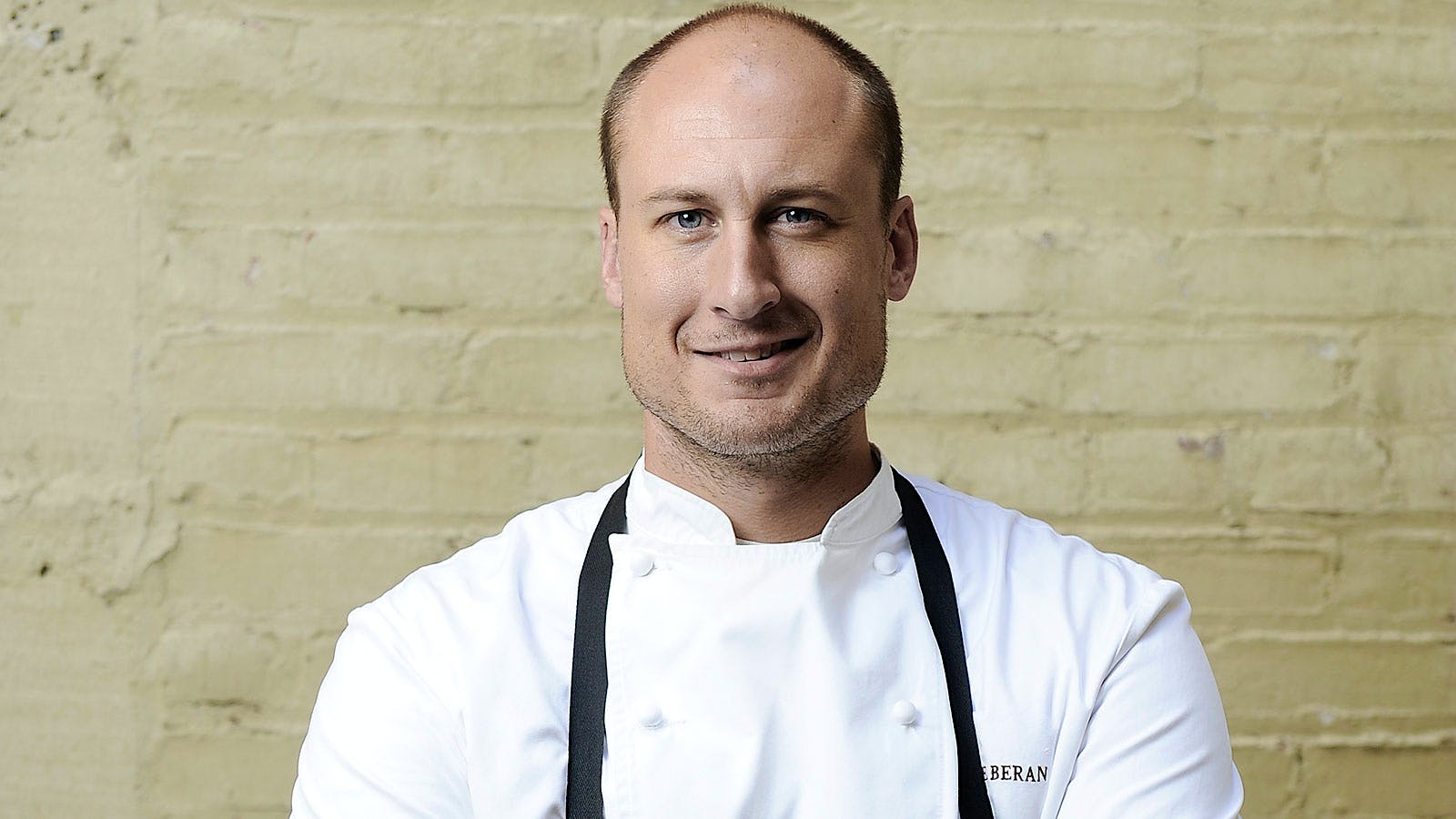 At his new bistro Pasjoli, Dave Beran serves a version of this savory lamb dish. (Photo by: Mariah Tauger)

Lamb chops are a godsend to the busy, the lazy and the flat-out exhausted. It doesn’t take much to cook delicious, juicy lamb chops in the oven, but read on for Beran’s thoughts on how to make yours great.

Pairing Tip: Why Grenache Works with This Dish

A ripe Grenache-based, Rhône-style blend with herbal accents brings out the grapes, fennel and onions on the plate. Look for picks from warm Southern Rhône appellations such as Gigondas and Châteauneuf-du-Pape, or head southwest to France’s Languedoc-Roussillon region.

For the olive butter:

For the roasted grapes and fennel:

1. In the bowl of a food processor, combine the olives, mustard, lemon juice and pepper. Pulse until the mixture forms a paste. Add the butter and process until the mixture is mousselike in texture. Add salt to taste and set aside.

2. Preheat the oven to 350° F. Set a length of aluminum foil on a sheet pan, leaving enough overhang on either end to seal. In a mixing bowl, toss the fennel, onions, grapes and lemon with the garlic, herbes de Provence, salt, pepper and olive oil, then pour the mixture onto the foil-lined sheet pan. Fold the foil tightly to seal into a packet. Transfer to the oven and bake for about 30 minutes, until the grapes are blistered and the fennel is fully cooked but not soft; a paring knife should meet with a bit of resistance. Remove the pan from the oven, increase the heat to 400° F and open the foil packet fully, letting the steam escape. Keep the packet open and return the sheet pan to the oven. Cook until the fennel and grapes are well-browned, about 25 to 30 minutes more. Remove from the oven and increase the heat to 450º F. Transfer the fennel, grapes, lemon and other solids to an oven-safe vessel and cover to keep warm. Reserve any accumulated juices separately.

3. Season the lamb aggressively with salt, pepper and herbes de Provence, and place fat-side up on a foil-lined baking sheet. Transfer to the oven. Flip lamb every 7 minutes until nicely browned, about 18 minutes total. An instant-read thermometer inserted between bones should register 120º F. Transfer lamb to a meat board and immediately brush all over with olive butter. Tent with foil and let rest 10 minutes; the meat’s internal temperature should rise to 130º F, or medium-rare.

4. Uncover fennel and grape mixture. Measure out 1/4 cup of the reserved fennel and grape cooking liquid into a small bowl. If there’s less than 1/4 cup, make up the difference with olive oil. Add the vinegar and stir to combine.

5. Slice the lamb between the bones into single chops. Divide the roasted fennel mixture among four dinner plates and top each with two lamb chops. Drizzle with the vinegar mixture. Serves 4.