Actor Ian Somerhalder is one of the most prominent vampire interpreters of our time. For eight years, he played fan favorite Damon Salvatore on the CW hit show The Vampire Diaries, and now he’s a director, producer and star of Netflix’s forthcoming V-Wars. (In this one, coming out Dec. 5, he’s actually fighting the vampires.) But the actor, 40, has a new thirst: He’s sinking his fangs into the wine business.

“Having a wine brand was something that I always wanted to do—for my life, not for my ego,” Somerhalder says. Partnering with Vik winery in the Millahue Valley of central Chile, Somerhalder finally got his chance. “I was having [the wines] at breakfast with eggs just trying to learn it,” he laughs. Named Dark II Dawn, the inaugural 2017 vintage was released in China in March, and Somerhalder plans to debut his wine in the U.S. market in 2020. The first bottling is a blend of 64 percent Cabernet Sauvignon, 22 percent Carmenère and 14 percent Syrah. In September, Somerhalder announced he is also creating a Bourbon with former co-star Paul Wesley.

Somerhalder is also thinking about the bigger picture. His Ian Somerhalder Foundation champions environmental education and conservation causes, with a recent focus on climate change. “Viticulture is one of those things that is such an amazing cross-section of climate and the health of our environment,” he says. Writer Brianne Garrett spoke to Somerhalder about the “alchemy” that went into making his blend, the parallels between wine and film, and why he still reaches for value wines. 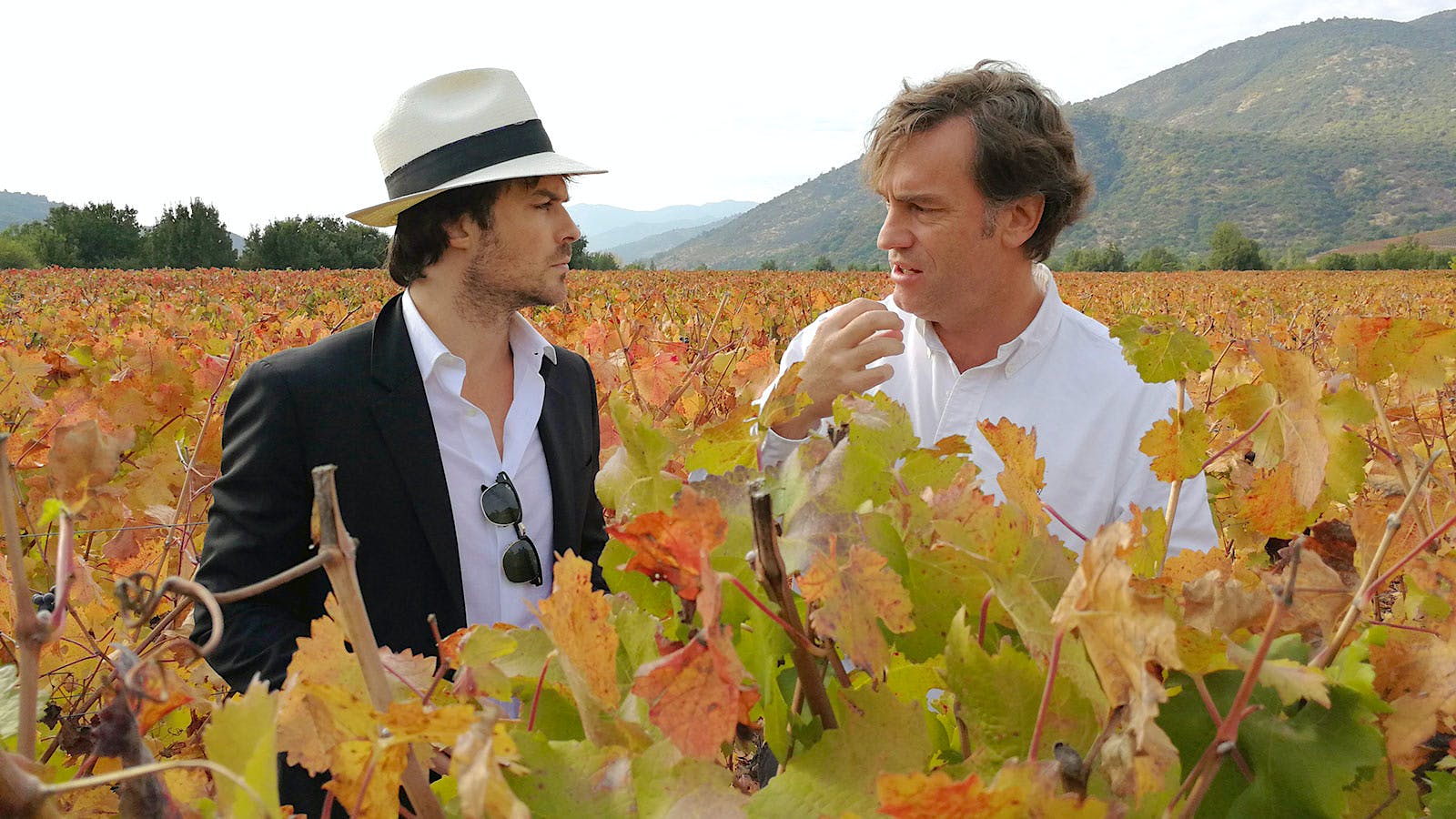 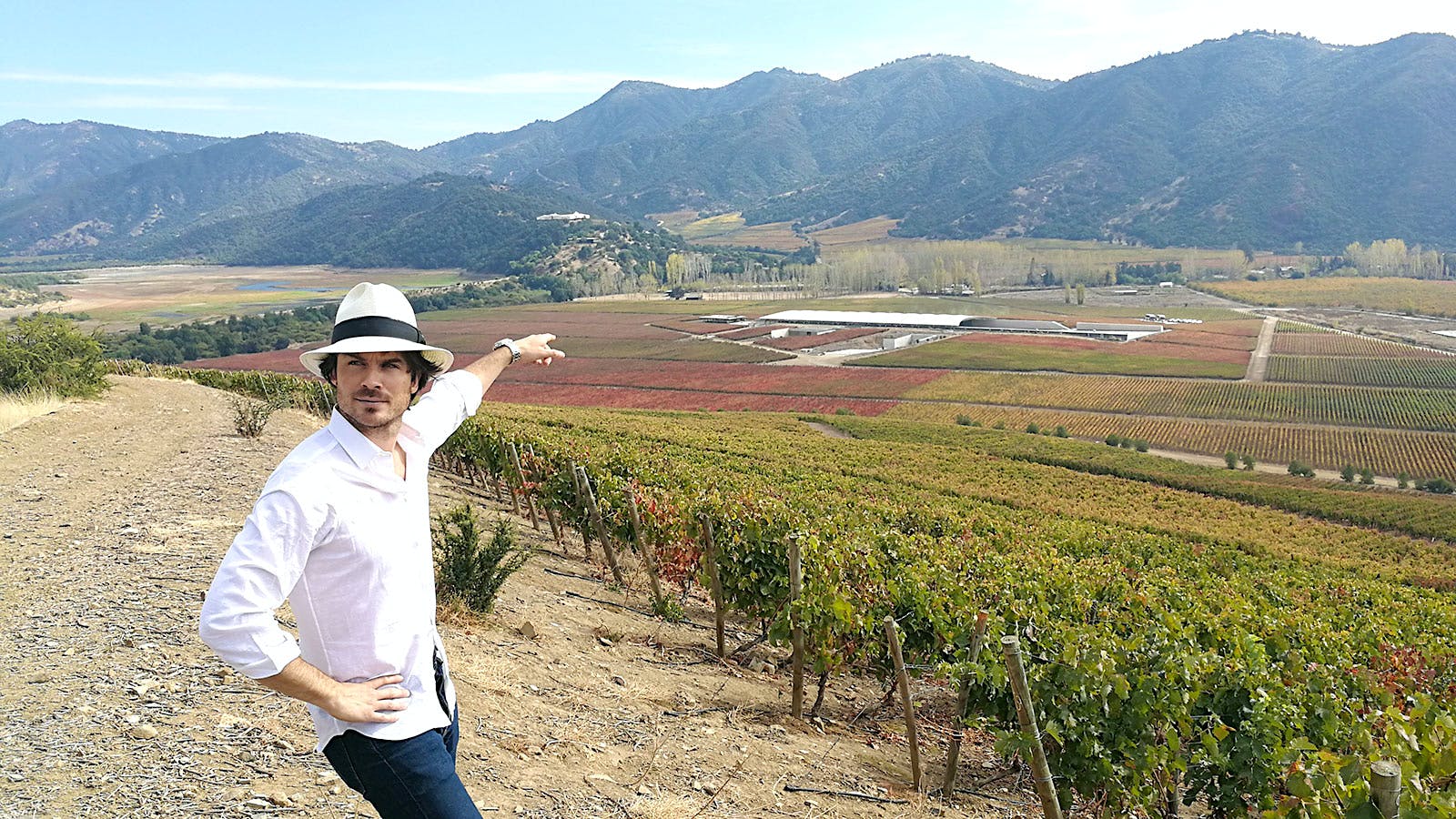 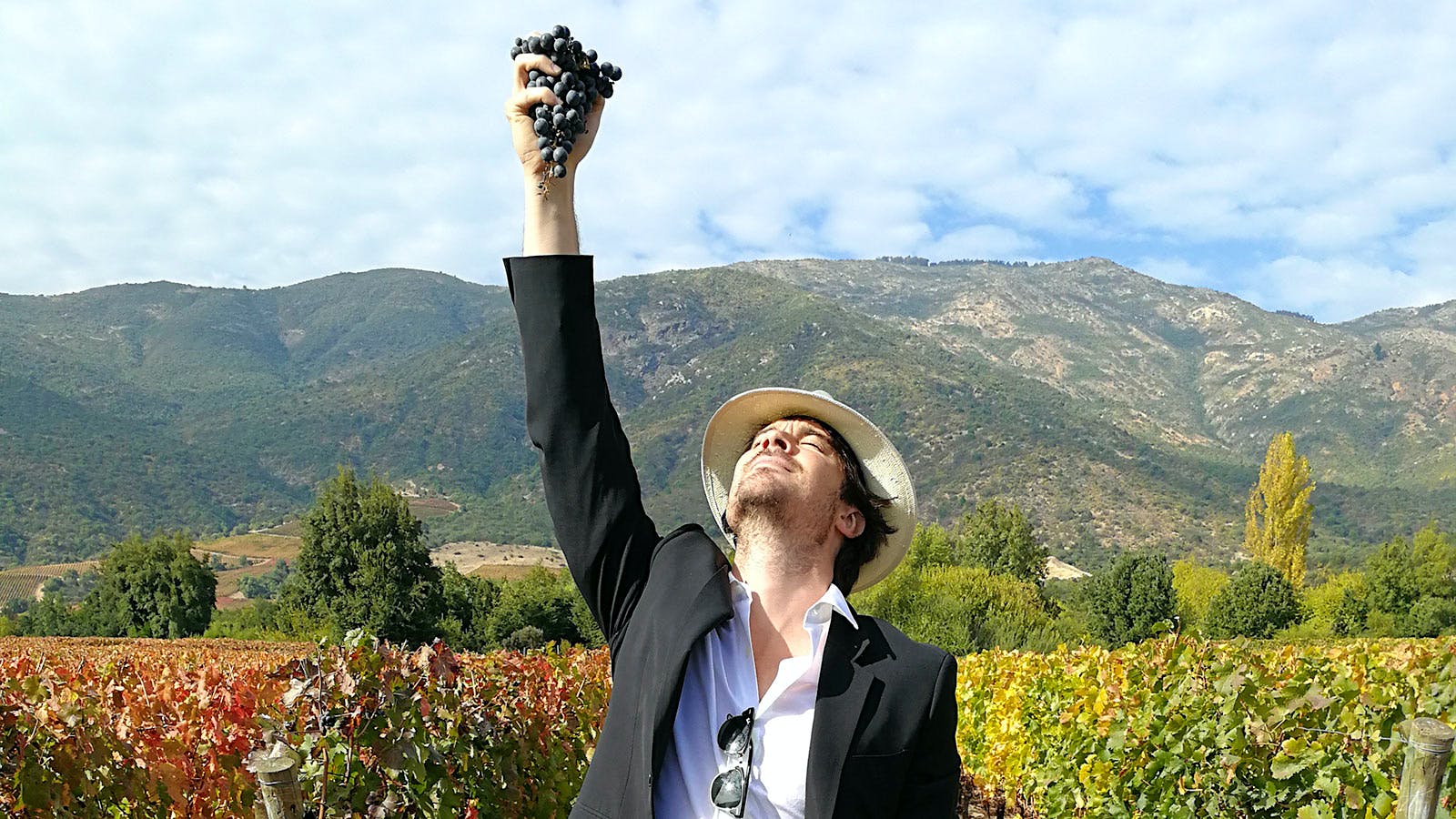 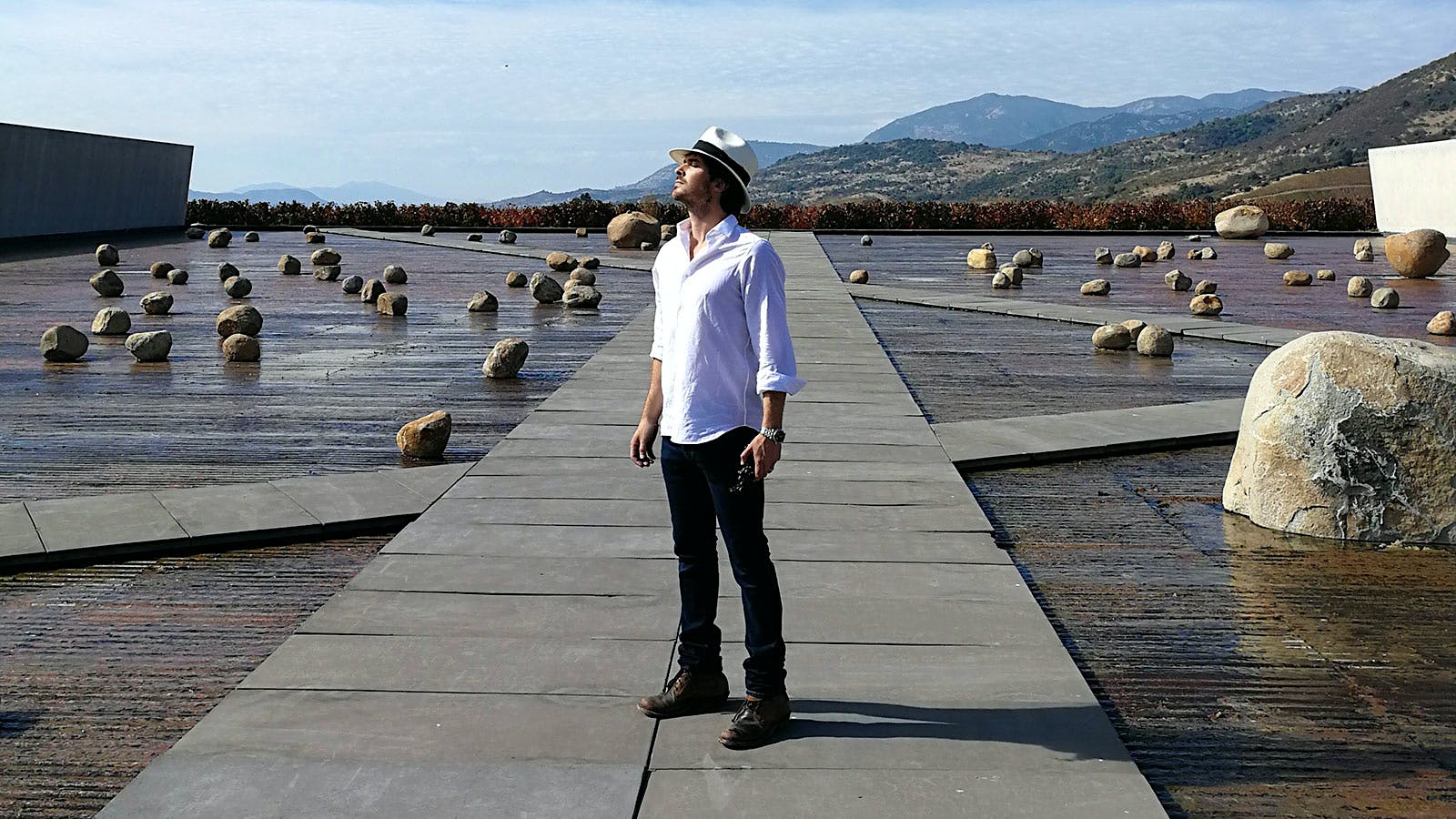 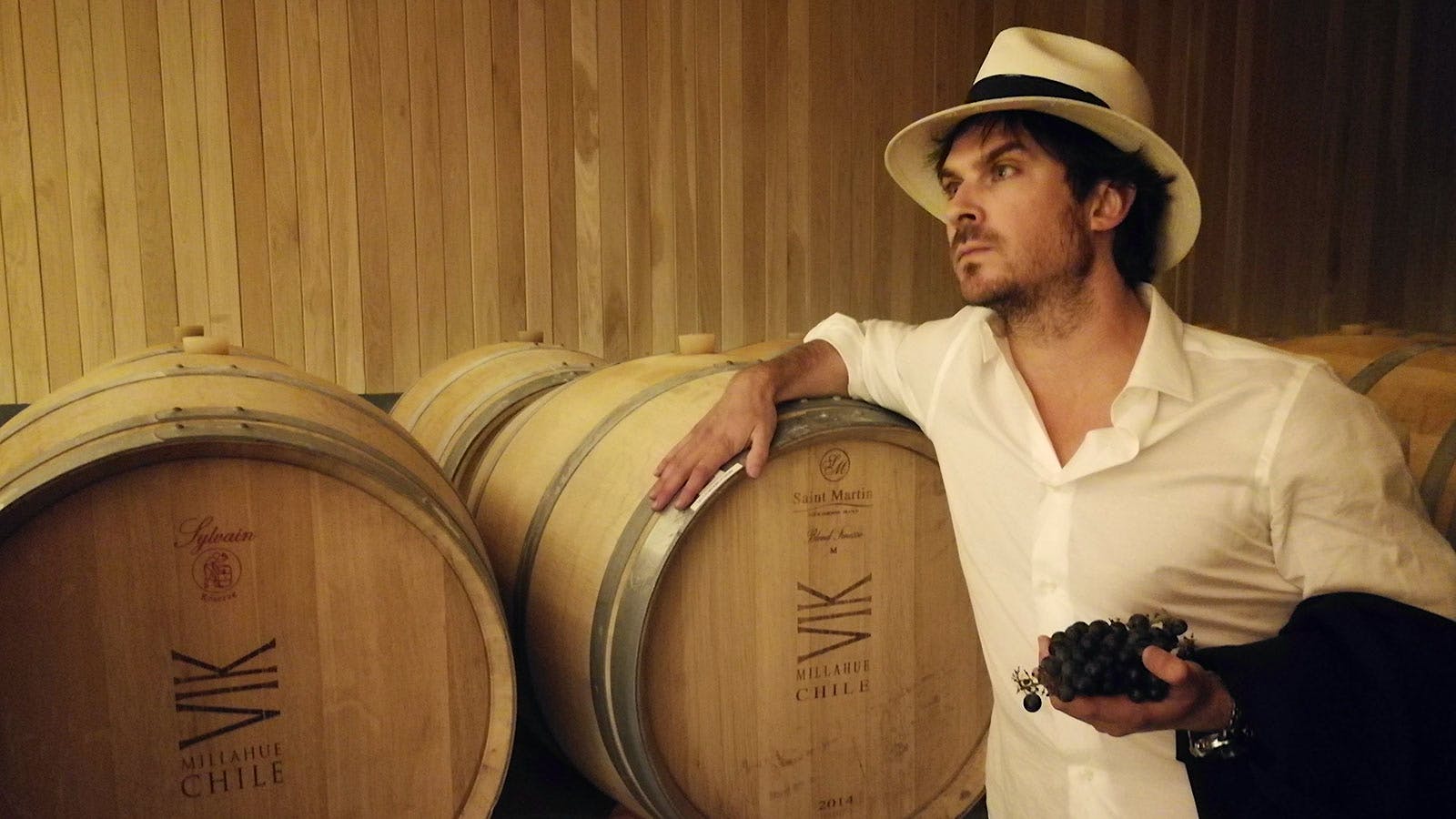 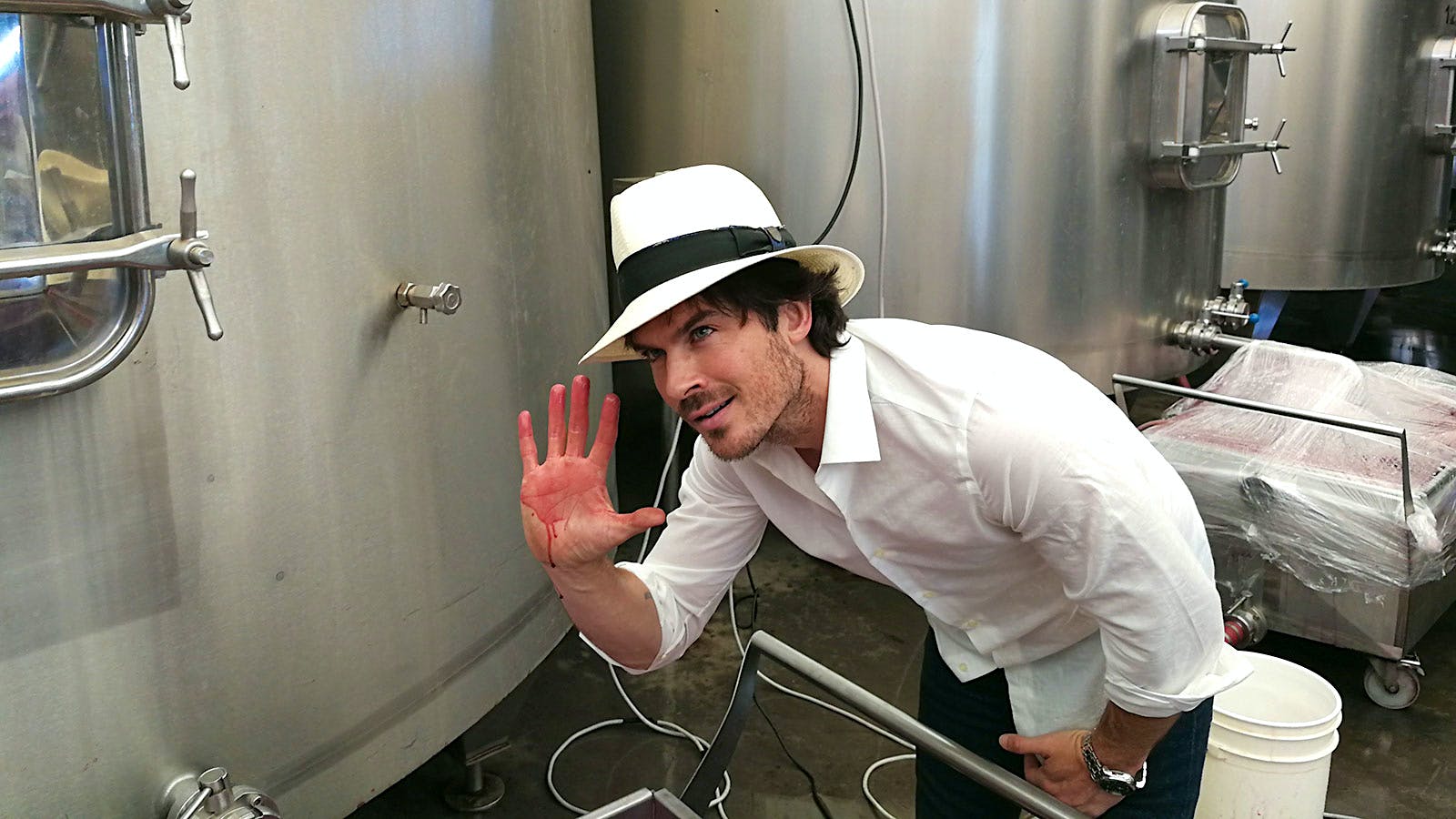 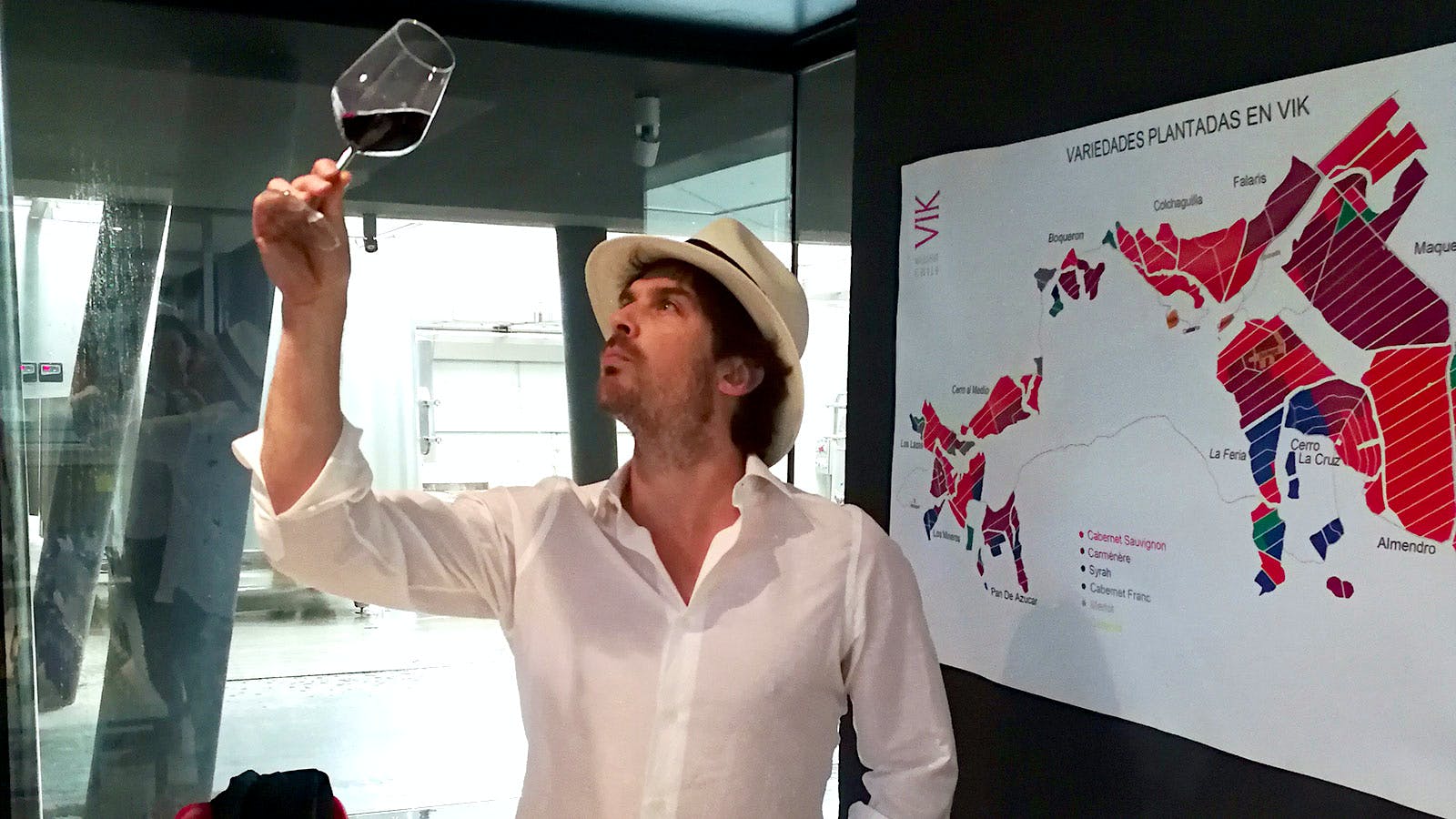 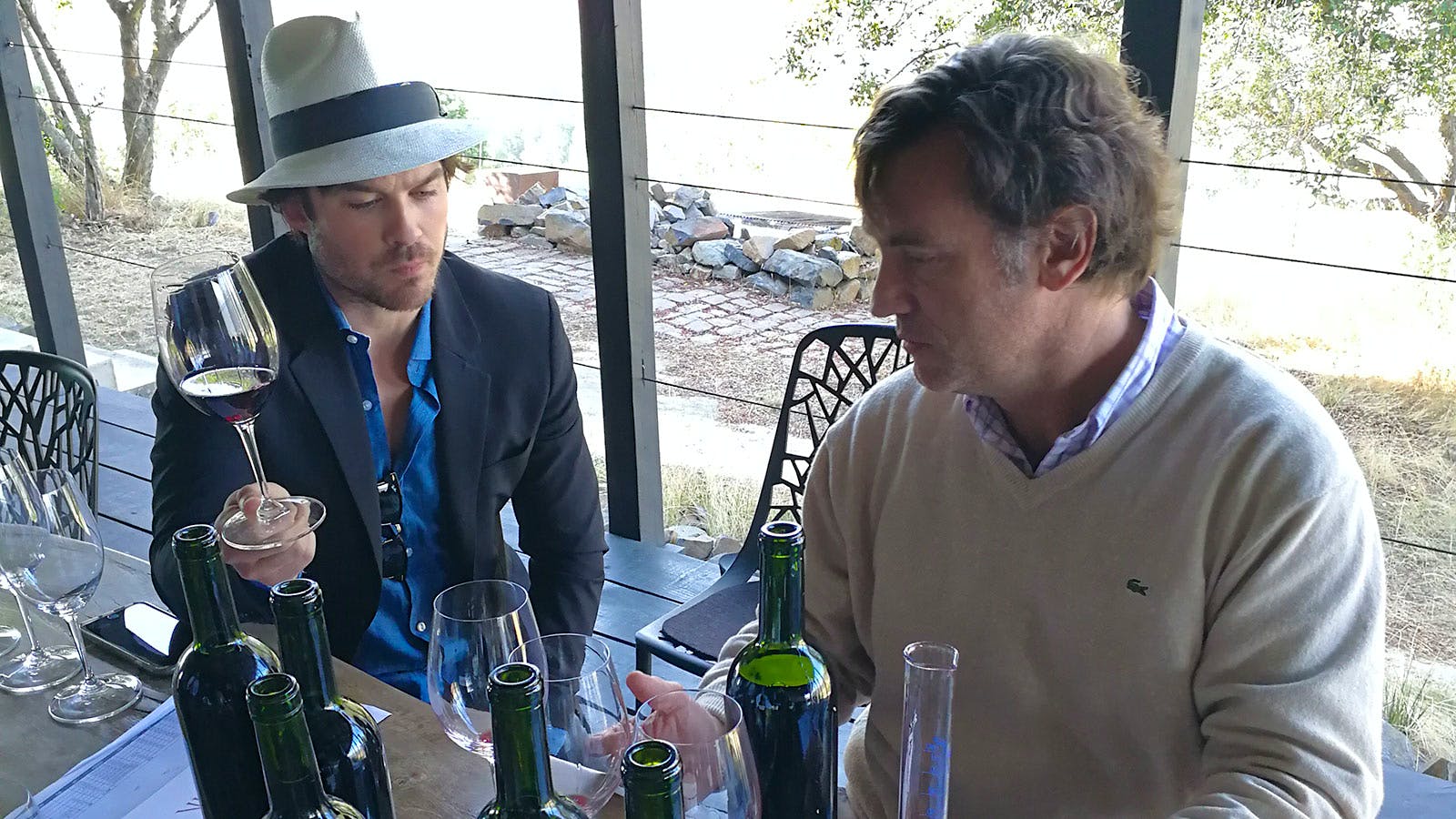 Wine Spectator: You’re wrapping up post-production for V-Wars. Tell me how winemaking and directing compare.

Ian Somerhalder: You know, for me, it’s all science and art: wine, dealing with chemistry; and filming, with the chemistry of humanity. You’ve got a script with words on it that you have to [translate to] camera with an entire production team, created in an artificial space to allow these human moments to happen. So it’s a type of alchemy, right? There’s science and there’s a little bit of luck and there’s patience.

Much like the film business, with wine, when you’re harvesting the grapes, you harvest at night and it’s a massive production of people in the vineyard at two in the morning with lights. So, yes, the unique quality of alchemy or science—ingredients, patience and skillset—is incredibly parallel in the wine business and in the film business.

WS: Tell me about the alchemy that went into creating your wine.

IS: I really love Bordeaux blends, but when you’re choosing a young wine and you want to bring it to market very quickly, the likelihood of this wine sitting around [aging] for the next 15 years is very low. I wanted to have a mix of sort of New World blends with the feeling of a classic Bordeaux, but easy to drink right off the bat, even when it’s young. In Chile, Vik is incredibly famous for its Cabernet Sauvignon, and its Carmenère is like nothing I’ve ever had. Carmenère is such a special taste, but it’s meant to be blended. And for me, mixing Syrah with Cab Sauv was No. 1, but obviously you can’t have too much Syrah because it is so sweet and syrupy. The Carmenère gives a little bit of balance to the Cab, and then the Syrah adds a level of fluidity to it. It almost takes both the profile of the Cab and the Carmenère and allows it to roll over your palate in a much easier way that most young wines simply won't do.

The Cab we chose came from two separate parts of the vineyard, so already their characteristics were so different and so complementary to one another; same went for the Carmenère, and the same again with the Syrah. That alchemy literally is science, and sometimes you get lucky and the profiles just blend together in harmony.

WS: How did you know you wanted to work with Vik?

IS: Alexander Vik had a vision—he went down there to Chile and bought 11,000 acres and he built the most state-of-the-art, most natural, organic vineyard. Every single stem is reused; it's mind-blowing. The great thing about Vik is that the wines are already top-notch, and sitting with [winemaker] Cristián—the amount that I learned from Cristián Vallejo was extraordinary.

WS: Where does your love for wine come from?

IS: I moved to Europe when I was 16, on my own. I was working as a model. I basically lived between France, Italy, Spain and New York from, like, 16 to 19. It was photo shoots, it was a lot of artists, photographers, art directors, ad executives, designers—lots of people in that realm who were very open and talked a great deal about wine. Once I had a lot of time on my hands, I got to travel through Europe, tasting some of the greatest wines and the simple ones. I developed a taste for wine, and really loved finding the nuance and understanding the profiles and how they were made.

I got to go to a lot of vineyards, but when I was young I didn’t have much money. Even while living in Italy, Spain was always such a go-to because they produce extraordinary wines and they’re not expensive. So I became very accustomed to Rioja. I also loved Chiantis and super Tuscans. Obviously the amazing Brunellos and Barbarescos and Barolos were extraordinary, but those were more of what I got when I was at these big dinner tables with all of these cool, fancy people. But on my own, I had to source the wines that weren't so expensive. I just got lucky.

WS: Dark II Dawn is only available in China right now—what are your plans to expand its accessibility?

IS: China was a great place for us to launch; it's such a vast market. But absolutely the goal is that this wine is available as quickly as humanly possible for the world to taste. For me, looking at Millennials and younger people wanting to access and taste good wine, my goal in the wine space is to shower the world with high-quality wines at costs that are attainable to people. [With] the information I have and the people that I've been able to come in contact with, it makes sense for me to provide high-quality wines at a cost that doesn’t destroy your checkbook.

WS: Besides your own wines, what do you like to drink?

IS: My go-tos are Spanish and Italian right now. One of my favorite Spanish producers is La Rioja Alta, which produces unbelievable wine for value. They make [a bottling] called Viña Ardanza, and those are highly rated wines and their price points are incredibly reasonable. They make another one called Viña Alberdi. On the Italian side, there’s an amazing producer, Avignonesi. The 2010 Vino Nobile Avignonesi—I bought 10 cases and I’m glad I did.

Dave Phinney, the mind behind The Prisoner Wine Co. and other innovative projects, keeps …

Adjacent to the coastal city of Vallejo, California, a tiny peninsula has seen little life …

In the Phinney Spirit

Elevating the Wine Experience in Sedona