Golf is the wine of sports: It's a leisure activity, but practitioners obsess over it; it's best enjoyed among friends; it doesn't have to be an expensive hobby but usually ends up that way; people get really worked up about scores .... But what is the wine of golf? The PGA Tour answered that this week by announcing a new "official" wine. And that title goes to California's own Meiomi.

"Meiomi's wine offerings are a great fit for the PGA Tour and the tastes of many PGA Tour fans and players," Brian Oliver, PGA's executive vice president of corporate partnerships said in a press release. The multiyear partnership means PGA Tour-goers will be able to sip Meiomi in wine lounges at tournaments across the U.S., including the Players Championship and Tour Championship.

Golfers, famously, are known for teeing up second careers in wine: Ernie Els, Greg Norman, David Frost, Retief Goosen. We wondered: What do the golfer-vintners think of the choice? So we asked the most qualified among them—not only a golf pro but a rival California winemaker who, like Meiomi, has Pinot Noir and Chardonnay in her bag: Cristie Kerr, who recently made an appearance as a Wine Star at the 2018 New York Wine Experience.

"I think it’s great that leading brands in the wine space are getting more consumers exposed to wine," Kerr told Unfiltered. "I’ve always been a fan of the Meiomi brand and its ability to impress the wine consumer for the price point. While it’s an extremely competitive landscape … we want California wines to win!" Golf claps all around.

A copy of Kellermaysterey, an extremely rare 16th-century book on how to make, store and improve wine, has surfaced, and if you're in the market for enophilia paraphernalia, it could be yours. Chiswick Auctions book specialist Carmen Donia told Unfiltered the old tome provides a glimpse into the early experimental stage of wine chemistry in Europe.

Printed in German in 1548 (the title, alas, does not translate to "Cellar Mysteries," but rather just "Winemaking"), the manual includes instructions for making other drinks and sauces as well, such as beer, vinegar, mead, vermouth, wormwood and brandies, as well as explanations of various winemaking techniques, like how to sanitize a barrel with sulfur.

Half a millennium later, few copies exist, but the book was so popular in its day that it was reprinted 11 times from 1536 to 1560. "It was like a bestseller," said Donia.

"The most popular books at the time were bibles and cookbooks," explained Donia. So the savvy printers often bound Kellermaysterey to editions of the first German-language cookbook, Kuchenmeysterey. The book is illustrated with woodcuts by Hans Schaufelein, a pupil of Albrecht Dürer, depicting the winemaker in his cellar, harvesting and tasting. It will be gaveled off May 29 in London and online.

The know-how in Kellermaysterey is certainly in high demand. Elsewhere, Belgian monks at Grimbergen Abbey recently found a 12th-century recipe for ale, believed to have been lost in a fire two centuries ago, which they have successfully brewed and plan to release commercially. This week also brings news that microbiologists, archaeologists and brewers in Israel teamed up to make beer with yeast specimens extracted from ancient pottery shards and jars—yeast colonies on vessels up to 5,000 years old, revived—in an example of the very traditional method.

If Rolls-Royce is going to make a picnic basket, it's gonna be the Rolls-Royce of picnic baskets, which means it's gotta store and chill Champagne. The House of Rolls-Royce announced the release last week of its newest accessory: the Champagne Chest, which the company states is "suitable for the most extravagant of environments from a superyacht to the terrace of a private residence" to, presumably, the trunk of a large, possibly armored car. It looks like a simple black box at first glance, but with the touch of a button, it opens and expands to reveal a Champagne flute set for four; the chest's lid transforms into an oak serving tray, and the sides pop out, revealing holders for your Champagne and snack pairing of choice, be it caviar, canapé, charcuterie, cheese or chips.

"We wanted to bring the power of juxtaposition to the chest, so we deliberately designed it with two states in mind: When it's closed, it's minimal, but when it opens, with the secret button, it comes alive," said head of bespoke design for Rolls-Royce Motor Cars Gavin Hartley. "There's a sense of theater." 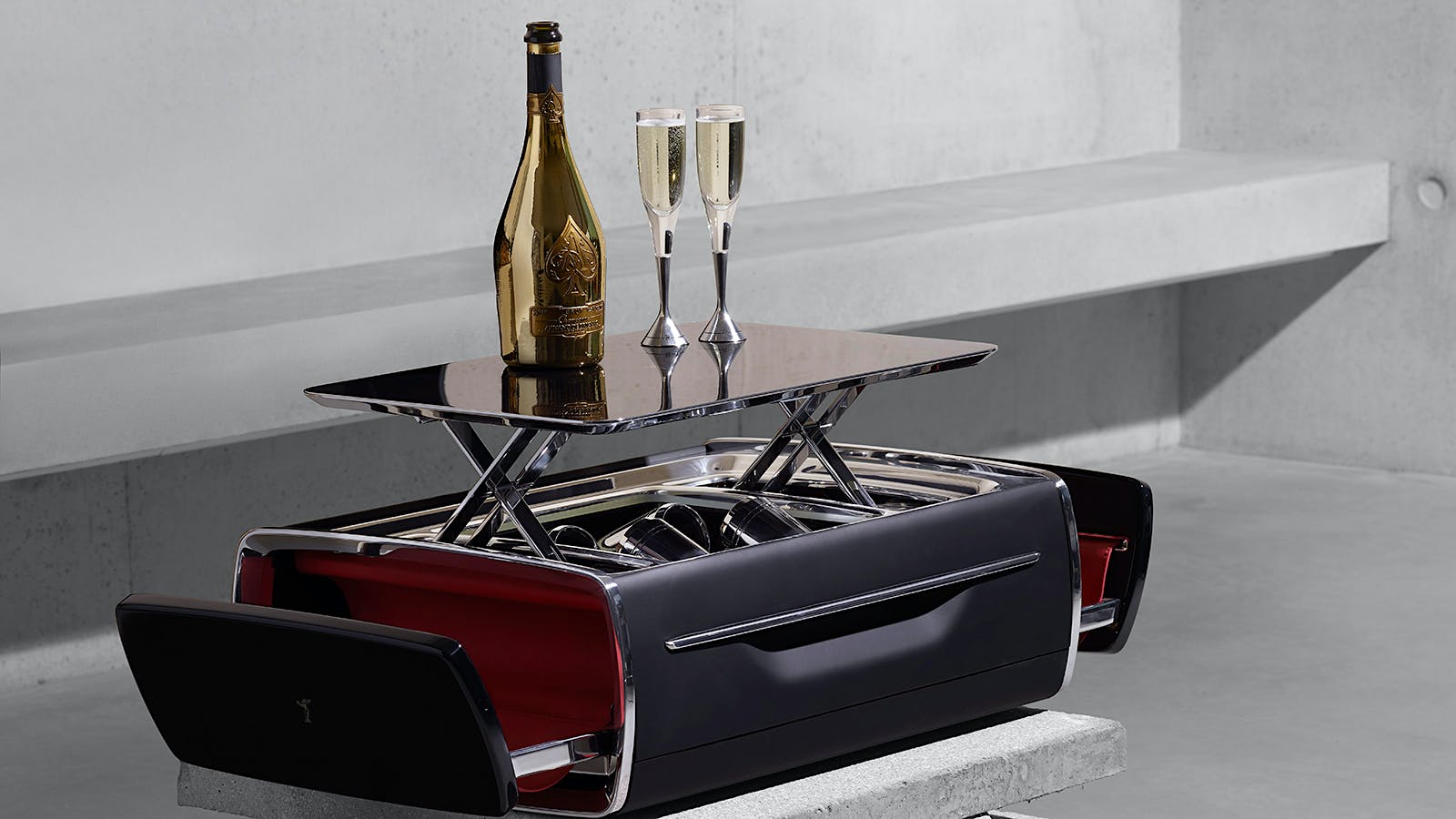 House of Rolls-Royce
That is indeed a bottle of Jay Z's Armand de Brignac "Ace of Spades" Champagne. Jay reportedly owns a Rolls or two.

To bring this show on the road, pick one up at your nearest Rolls dealership; it'll set you back $47,000, about the same price as a whole Lexus ES 350 F Sport winecar, or a Tesla Model 3 and about 45 cases of Meiomi Pinot Noir to pour all over the seats.

Carabinieri in Turin nabbed one-half of the Buoni and Claudio of Italian winecrime this week when a restaurateur became suspicious of the scheme they'd been running. The scam was simple enough: A mystery woman would call to reserve a table and ask the restaurant to order some bottles of "special" wine from a man posing as her "trusted supplier." The restaurant would pay an exorbitant amount for the bottles, the seller would deliver them, no one would show for dinner and it would turn out that the bottles were cheap supermarket wines.

This week, a restaurant in the San Salvario neighborhood got the call and prepared to spring a trap: When the merchant poseur arrived and the transaction had been made, police dressed as waiters apprehended him. He had attempted to charge $470 for six bottles worth $17 all in, a markup most restaurants consider excessive. But Torino Today has been reporting suspiciously similar stories for more than a year, and this particular schmuck was not even the first to be caught and arrested. But the contessa of deception on the other end of the phone line remains at large.