“When you cook, you’re drawn to the things that have a place in your heart,” Haidar Karoum observes. And yet he believes that a reflexive reach for comfort will only take you so far: “Half of the fun is being able to explore different cuisines.”

Karoum’s happy place is in the bridge between the two modes. His Washington, D.C., restaurant, Chloe, offers a global menu weaving together diverse traditions. There’s pistachio in the pâte, labneh in the Brussels sprouts, chile-lime dipping sauce with the roast chicken, and pappadam, fenugreek and coconut alongside the cod. Hummus might traditionally be served with pita, but it turns out to be excellent with naan too.

Growing up in D.C. as a first-generation American, Karoum knew and loved the food of his Lebanese father, an avid cook, as well as that of his Irish mother, and saw the opportunity to try dishes beyond his home food as an invitation to adventure. “I’d be excited about going to a friend’s house for a sleepover because I’d get to eat American food,” he recalls. He also traveled extensively outside the U.S. with his family.

The Lebanese cuisine Karoum grew up on shares common ground with the foodways of Greece and much of the Fertile Crescent, but even farther afield, “Lebanese food is very similar to a lot of the cuisines of the Mediterranean Basin,” he says.

Years ago, eating his way through a trip to Italy with his parents, Karoum felt the call of home mixed with the spark of discovery. “I was used to fruity olive oils and garlic and fresh herbs and tomatoes,” he says. In the dish shown here, he uses all of those to make a late-summer gnudi: rustic Italian ricotta dumplings with a quick cherry tomato confit, fresh corn, sweet basil and herbed olive oil.

To drink alongside, he favors an offbeat white that is simultaneously native and foreign: nearby Virginia winemaker Michael Shaps’ Petit Manseng. An aromatic white grape indigenous to southwestern France, Petit Manseng is used primarily in the sweet wines of Jurançon but can also be vinified dry. In Virginia, the grape’s high acidity, medium to full body and exotic fruit notes make for distinctive dry whites.

Karoum’s pick combines ripe tropical fruit with a beeswaxy quality that melds with the starch in the gnudi. “The richness of it pairs really well with the sweetness of the corn and the richness of the ricotta,” he says. It’s a match that illuminates a key to his eclecticism: “I’m always trying to find some sort of balance.” 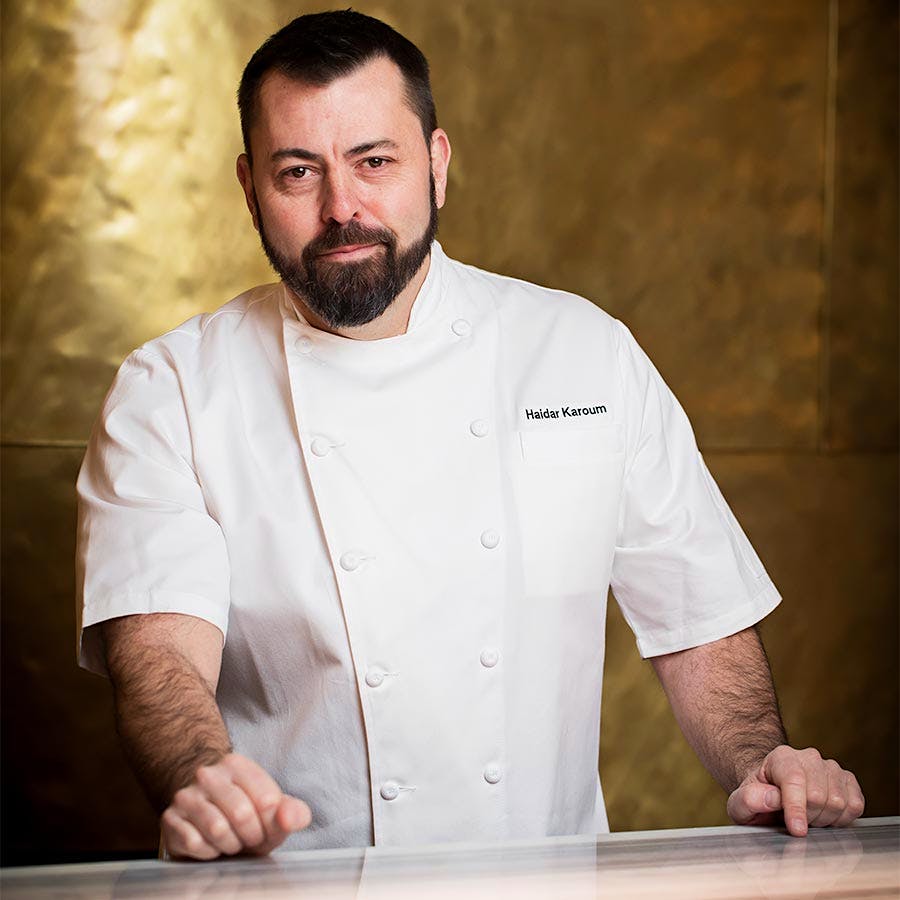 Scott Suchman
Haidar Karoum grew up with a mixture of culinary traditions from his Lebanese father, an avid cook, and his Irish mother.

If you’re not quite sure what gnudi is, think of it as gnocchi’s more rusticated, low-maintenance cousin. “If people can get past the intimidation of making [gnudi], it’s actually incredibly simple to execute,” Karoum says. Gnocchi is made from a mixture of flour and cooked, peeled potatoes that is formed into a mass, kneaded, rolled into ropes and cut into pieces. Gnudi, by contrast, swaps out potato for ricotta (no peeling or cooking!) to create a loose dough that’s simply scooped from a bowl, then plunked directly into simmering water for a few minutes—and that’s that. On the plate, it has a pillowy, delicate charm that may prove addictive. Read on for Karoum’s tips on how to bring this easy homemade pasta into your world, year-round.

Pairing Tip: Why a Juicy White Works with this Dish

A ripe, fruity white with fine cut will stand up to the starchy, smooth ricotta dumplings and the burst of acidity from a quick version of tomato confit. Try a juicy white blend or, if you can find one, an offbeat varietal bottling of Petit Manseng.

For even more wine pairing options, WineSpectator.com members can find other recently rated juicy whites in our Wine Ratings Search.

1. Combine the olive oil, corn, thyme, rosemary and garlic in a medium-sized pot and heat over medium. After 4 to 5 minutes, the herbs and garlic will begin to simmer gently. Add the tomatoes and return to a gentle simmer, lowering heat as needed. When the tomatoes have begun to pop and shrivel, about 8 minutes, remove from heat, season with 1/2 teaspoon salt and let cool. Using a slotted spoon, gently remove the tomatoes and corn from the oil, reserving the tomato-corn mixture and the oil separately.

3. Remove the herbs from the reserved olive oil and discard. In a medium sauté pan, heat about 4 tablespoons of the reserved oil over medium, saving the rest for another use. Add the sliced scallions and gently sauté for 1 minute. Stir in the reserved tomatoes and corn, and remove from heat.

4. Bring 1/2 gallon water to a boil, then reduce to a gentle simmer. Season with 2 tablespoons salt. Add ricotta mixture in 1-tablespoon scoops, one at a time. Cook just until dumplings rise to the surface of the water, about 3 minutes, then let cook for about 20 seconds longer. Remove with a slotted spoon and add to the scallion-tomato-corn mixture. Stir in the butter, gently swirling the pan to combine. Warm over low heat and top with the basil and Parmesan. Serves 4.

This satisfying weeknight favorite is perfect for summer grilling, paired with a juicy …

A crisp, yet lush Washington wine plays up the summery accents in this straightforward …