Updated Oct. 29, 11 a.m. ET: According to state agency Cal Fire, the Kincade fire has burned 75,415 acres and is 15 percent contained as of Tuesday morning. Low winds overnight slowed its advance and allowed firefighters to gain ground. Their concern is whether it will spread rapidly if winds increase today. If so, Santa Rosa and the northern Napa Valley could be at risk. The National Weather Service has issued a wind advisory for the region which will go into effect at noon today, forecasting gusts of 45 to 65 mph.

Updated Oct. 28, 10 p.m. ET: Since Monday morning the fire has grown to more than 74,000 acres, according to Cal Fire officials, with 123 structures destroyed. Favorable weather during the day allowed firefighters to increase containment to 15 percent, but additional evacuation warnings have been issued for parts of western Lake County.

Jackson Family Wines owns multiple properties in Sonoma, including several in the impacted areas. "Based on reports that we have received, we have sustained some damage to the barn and winery at the Field Stone Vineyard property on Highway 128, but the Vérité estate off Chalk Hill Road and Stonestreet winery in Alexander Valley remain structurally unharmed," said Kristen Reitzell, vice president of public relations for Jackson Family. "While the area around all three properties was threatened by fire, we remain hopeful that there was minimal or no long-term damage to the vineyards.

"Safety has been our first priority and the company is not asking anyone to inspect these properties to assess the extent of the damage, if any, unless we feel it is safe," she added.

Oct. 28, 6 p.m. ET: Just a few hours after the Kincade fire started, Fred Young knew his family's Sonoma farm, Robert Young Winery, was in trouble. "Early Thursday morning we saw the fire coming over the hill at around 3 or 4 in the morning," Young told Wine Spectator. "Winds were at 70 mph, which is unusual for us. Within 40 minutes the flames were down at the edge of the vineyards."

The fire quickly burned brush surrounding the Alexander Valley property. Fred, his brother Jim and son Robert refused to leave, and they were soon joined by a team of firefighters. "When the winds died down around 5:30 am we were able to try putting out fires in the buildings and any structures on fire." For 36 hours, the firefighters worked to protect the 160-year-old family ranch.

Across Sonoma County, firefighters have been working to contain the Kincade fire. As of Monday morning, it had burned more than 66,000 acres and destroyed 96 structures, including Soda Rock winery and the home of Jackson Family Wines' Julia Jackson. The 190,000 residents of large parts of Sonoma County who were ordered to evacuate are scattered across the region, anxious to find out what happened to their homes and businesses.

An evacuation advisory remains in effect for parts of the Napa-Sonoma county line including the town of Calistoga. The sheriff's department is not allowing residents to reenter any of the burn areas at this time. Late on Monday, it announced that residents of western parts of the county not in the burn zone could return.

Sonoma remained under a red flag warning for dangerous winds until 11 a.m. local time this morning, when calmer weather returned. That should give firefighters a window of opportunity to gain ground on the fire that was only 5 percent contained as of Monday morning. But meteorologists warn that another red flag event will start Tuesday and could potentially continue into Wednesday.

Overnight, the critical fire activity was located around the town of Windsor. Firefighters made a stand in the area using all of the resources at their disposal, hoping to protect the town. "Yesterday, in the northeastern area of Windsor, we had a very aggressive fight on the fire by our partners at Cal Fire and all of the public safety people in that area," said Sonoma County Sheriff Mark Essick at a press conference. "We owe a huge debt of gratitude to our firefighters. The northern area of Windsor was saved yesterday because of their efforts."

The state fire agency, Cal Fire, is still assessing the situation there, but reports that the National Guard and firefighters from neighboring states have joined the fight. There are now over 4,000 firefighters battling the flames.

Many winemakers can only wonder how their vineyards and wineries have fared. David Jeffrey, founder and winemaker of Calluna, left his winery just north of Windsor on Saturday afternoon and ended up relocating three times as the evacuation zone kept growing. "I was contacted at 11 a.m. [on Sunday] by two reliable sources who told me that the fire was moments away from hitting our property," he said. "I started to accept the worst-case scenario. But, in a hopeful turn of events, one of those sources now tells me that he believes our property is OK. He says that firemen told him the property (or at least some portion of it) has been spared."

Some winery staff opted to stay onsite, in hopes of keeping things going. "Our ranch manager/director of vineyard operations Brent Young and our winery operations director Tim Spence have been to the property since the Saturday morning firestorm," said Lisa Mattson, director of marketing for Jordan. "Spence stayed last night to watch over the place. We have a generator that we have been using and we currently have enough diesel to run it for several more days."

Jordan still has several tanks of wine fermenting, which led to some creative winemaking. "Our winemaker Maggie Kruse evacuated to San Francisco. When Kincade broke out, we only had two tanks with active fermentations happening. These two tanks are filled with Cabernet that arrived very cold, and now they need to be pumped over. Since she and her crew are evacuated, she had a conference call with Tim Spence today and gave him a tutorial on how to conduct a pump-over."

While the flames bypassed Jordan, Mattson says they are concerned about growers they work with and plan to offer support.

The priority for firefighters for now is to battle the fire at its northeastern edge, which includes parts of Knights Valley, home to wineries such as Peter Michael and Knights Bridge. They are also battling the fire farther south, in the Shiloh Ridge area near Windsor. 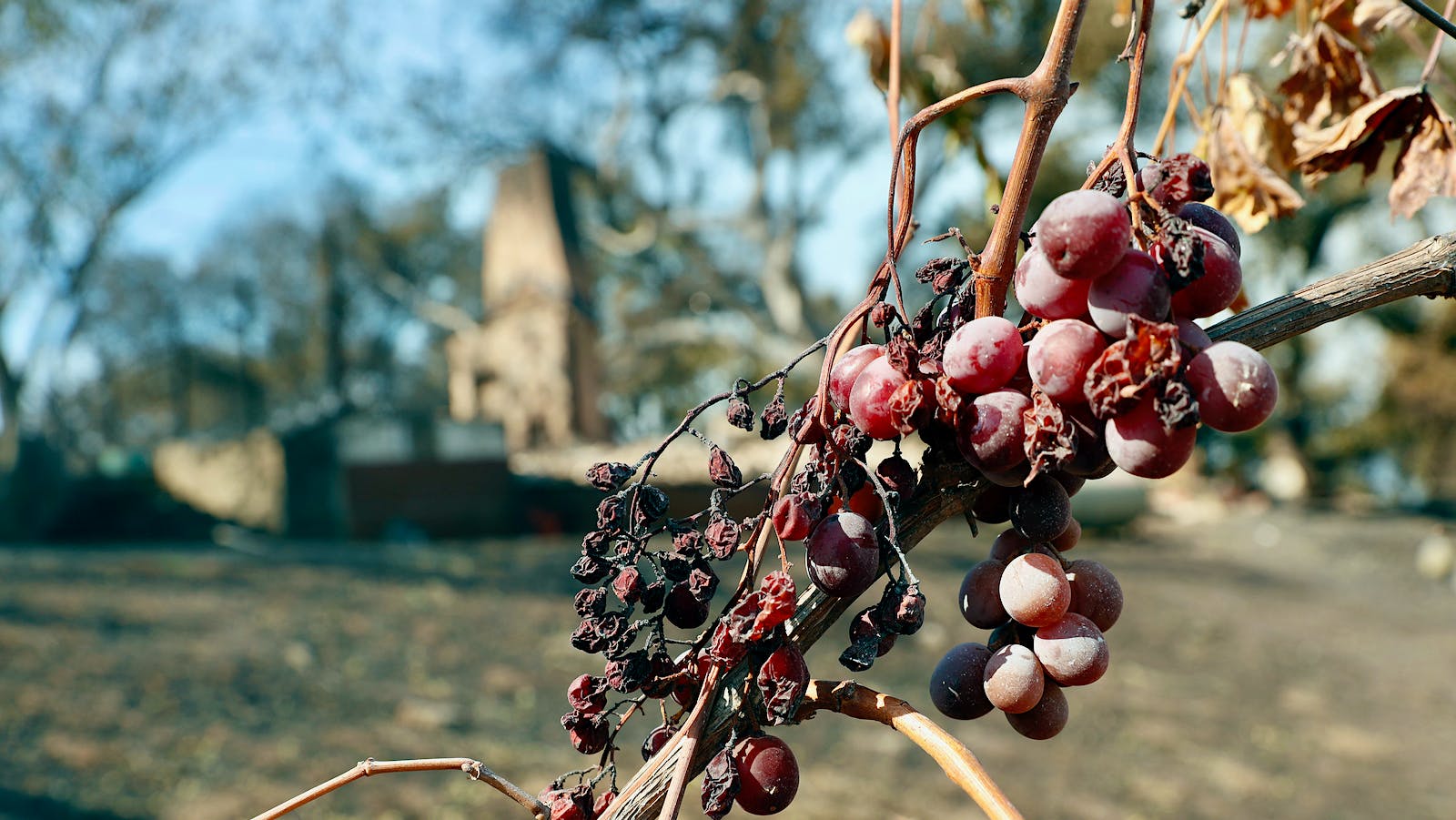 "There is still no damage reported to any of the winery buildings or vineyards," said Peter Kay of Peter Michael Winery. "The 2019 vintage is safely inside the winery. The harvest was complete last week. Yesterday and last night were very challenging; there were hotspots on the estate and Cal Fire diligently kept them under control.  The threat to the property is ongoing, but barring an unforeseen turn of events, the worst is over."

Firefighters' concern is that increased winds on Tuesday and Wednesday could spread the fire rapidly toward Santa Rosa, Sonoma's biggest city, or to the southeast and into northern Napa Valley. The National Weather Service has issued a red flag warning for Napa County from Tuesday at 8 a.m. to Wednesday at 4 p.m.

—with reporting by Lynn Alley and MaryAnn Worobiec