Austria occupies a niche market in the United States, often overshadowed by its wine giant neighbors Germany and Italy. Nevertheless, Austria's wines, led by its signature Grüner Veltliners, have earned their place on the world stage.

The country's major winegrowing regions are located along its eastern border, and Americans will be most familiar with the northeastern Niederösterreich region, home to top appellations Wachau, Kremstal and Kamptal. Below Niederösterreich lies Burgenland, where Blaufränkisch is the leading red and where the late Alois Kracher's extraordinary dessert wines from the Neusiedlersee subregion might be Austria's most coveted vinous export.

And south of Burgenland, on the border of Slovenia, the region that stands out for me as Austria’s most beautiful: Styria, where the verdant natural splendor has earned it the nickname “The Green Heart of Austria.”

Styria is Austria’s best-kept secret. A drive through the region’s rolling green hills, lush forests and picturesque villages is a storybook experience, and all along the way are traditional winery-run taverns known as buschenschank, offering house wines and local hearty dishes. Most important, the quality of Styria’s wine is very much on the rise.

Less than 10 percent of Austria’s wine comes from Styria, but in 2018, three of its subregions—Vulkanland Steiermark, Südsteiermark and Weststeiermark—were elevated to Districtus Austriae Controllatus (DAC) status, Austria’s equivalent to France’s Appellations d’Origine Contrôlée. These three DACs are the names to seek for a taste of this region’s exciting up-and-coming wines.

The hearty Welschriesling grape (no relation to Riesling) dominates the region, but Styria’s diverse top terroirs are dedicated to more characterful varieties. The most important grape in Vulkanland Steiermark is Sauvignon Blanc, but Traminer gets special treatment as well, yielding light-bodied but highly aromatic and minerally wines with unique spice profiles. Sauvignon Blanc is also the top grape in Südsteiermark, but the region’s Chardonnays, known here as Morillon, are worth pursuing for their mineral-driven and high-acid profiles, similar to those of France’s Jura. Finally, in Weststeiermark, the indigenous Blauer Wildbacher grape is used to make the region’s invigorating Schilcher rosés.

Building a Foundation of Quality

Steirische Terroir & Klassik Weingüter (STK) is a group of 12 Styrian producers dedicated to raising the quality bar and championing sustainability. Its founders set the standards that served as the framework for the rules adopted by Styria’s three DACs. “It started out of friendship, but today the goal is to push [higher] quality for the whole region,” says STK vintner Alex Sattler. Light-bodied wines of elegance and minerality are the common denominators among STK’s member wineries.

The leading producer of the group is Armin Tement, whose 250-acre estate is the largest privately owned winery in Südsteiermark. Winemaking here leans toward the non-interventionist school, with spontaneous native yeast fermentations and minimal additions of sulfur. Tement’s white wines also get up to three days of skin contact, or maceration, which adds to their structure and creates crunchier textures. The best wines here are the single-vineyard bottlings, led by the Südsteiermark Ried Zieregg IZ Reserve, which is made entirely from Sauvignon Blanc—the 2012 vintage ($120) earned 94 points in my official blind tasting. The wine is a rarity to say the least: After a 100-day slow carbonic maceration, the grapes are pressed and the juice is aged on its lees for five years in neutral oak barrels. “We can only use tight [grape] bunches with small berries,” says Tement, explaining that the cuvée can’t be made every year. Although this type of fermentation (most famously employed for Beaujolais Nouveau) is normally used to produce light-bodied, fruit-forward red wines, the IZ Reserve is distinctly complex.

Also in Südsteiermark, the Sattler family has been growing vines since the late 19th century, but it was Willi Sattler, now joined by his sons Andreas and Alex, who set the Sattlerhof brand on the path to quality. In 2013, the Sattlers converted to organic farming, but Alex wants to push their viticultural program further. “I’ve been reading a lot about biodynamic farming and am very interested in this holistic approach,” he says. Sattlerhof’s Sauvignon Blancs are precise and linear, with distinctive silkiness; the 2017 TBA Südoststeiermark ($65/375ml) earned 95 points. 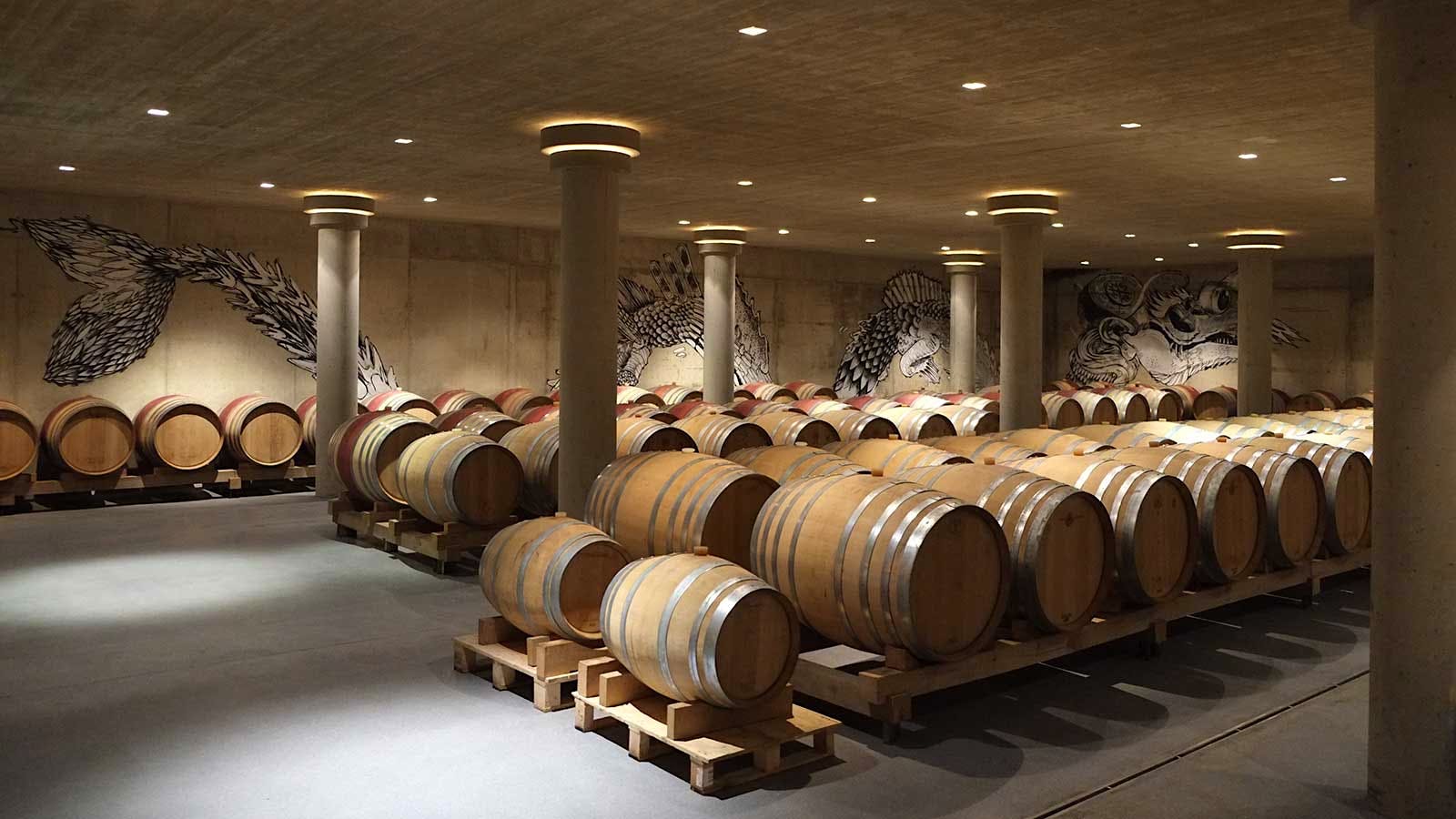 Another key member of STK is Neumeister, in Vulkanland Steiermark. Led by Christoph Neumeister, the 75-acre estate has been farmed organically since 2008. Neumeister likes high density in his vineyards. “I like my plants to compete for nutrients with one another, because that way they give me high-quality fruit,” he explains. The Sauvignon Blancs and other whites have electric acidity that take years to integrate; the 2015 Sauvignon Blanc Vulkanland Steiermark Ried Moarfeitl (93 points, $61), is intense, focused and refined.

Styria’s other notable vintner collective is Schmecke das Leben, which consists of five producers (four of whom export their wines to the U.S.) farming biodynamically and practicing minimal intervention in the cellar—these producers are at the forefront of Austria’s natural wine movement. Because their wines don’t meet the standards of regional typicity dictated by the local DACs, Schmecke das Leben member wines are labeled with the catchall Steiererland appellation. These wines are characterized by atypical flavors and appearances, and great complexity.

Sepp Muster is an Austrian natural wine pioneer and the group's de facto leader. With his wife, Maria, he took over his family estate in Sudsteiermark and started farming biodynamically in 2000, prioritizing the health of his soils. During my first visit here in August 2017, Sepp told me of a group of scientists researching biodiversity in the region, going through his vineyards in search of 10 different flora species. “They found 72!” he exclaimed with a grin. “The most important thing is how the soil influences the vine,” he explained to me when I came back earlier this year. Muster's wines are intriguing, but they require time, and an adventurous palate: These are not the traditional expressions of Chardonnay and Sauvignon Blanc that most wine lovers have come to expect. The wines are firm, even tannic, but also aromatic, with herbal and floral notes. They also have a signature matchstick and dried citrus peel funk which can dissipate with age. Muster's Steirerland Gräfin 2016 (93, $49) is almost orange in color, with a borderline cloudy appearance, but it's beautifully textured, with a minerally finish.

In my recent tastings, Werlitsch winery has been making the most compelling wines among the members of Schmecke das Leben. Winemaker Ewald Tscheppe has worked biodynamically since 2004 at his Sudsteiermark estate. His vineyard soils are rich in chalky marl (known locally as opok) and shells left behind by a prehistoric seabed, yielding wines with a paraffin aroma and texture that is at once both crunchy and velvety. Ewald credits the complexity of his wines to his viticultural methods, which he says encourage the "liveliness" of his soils. Two of his 2015s, both blends of Sauvignon Blanc and Morillon (Chardonnay), earned 94 points in my blind tastings earlier this year, the Steiermark Freude ($62) and Steirerland Ex Vero III ($62). 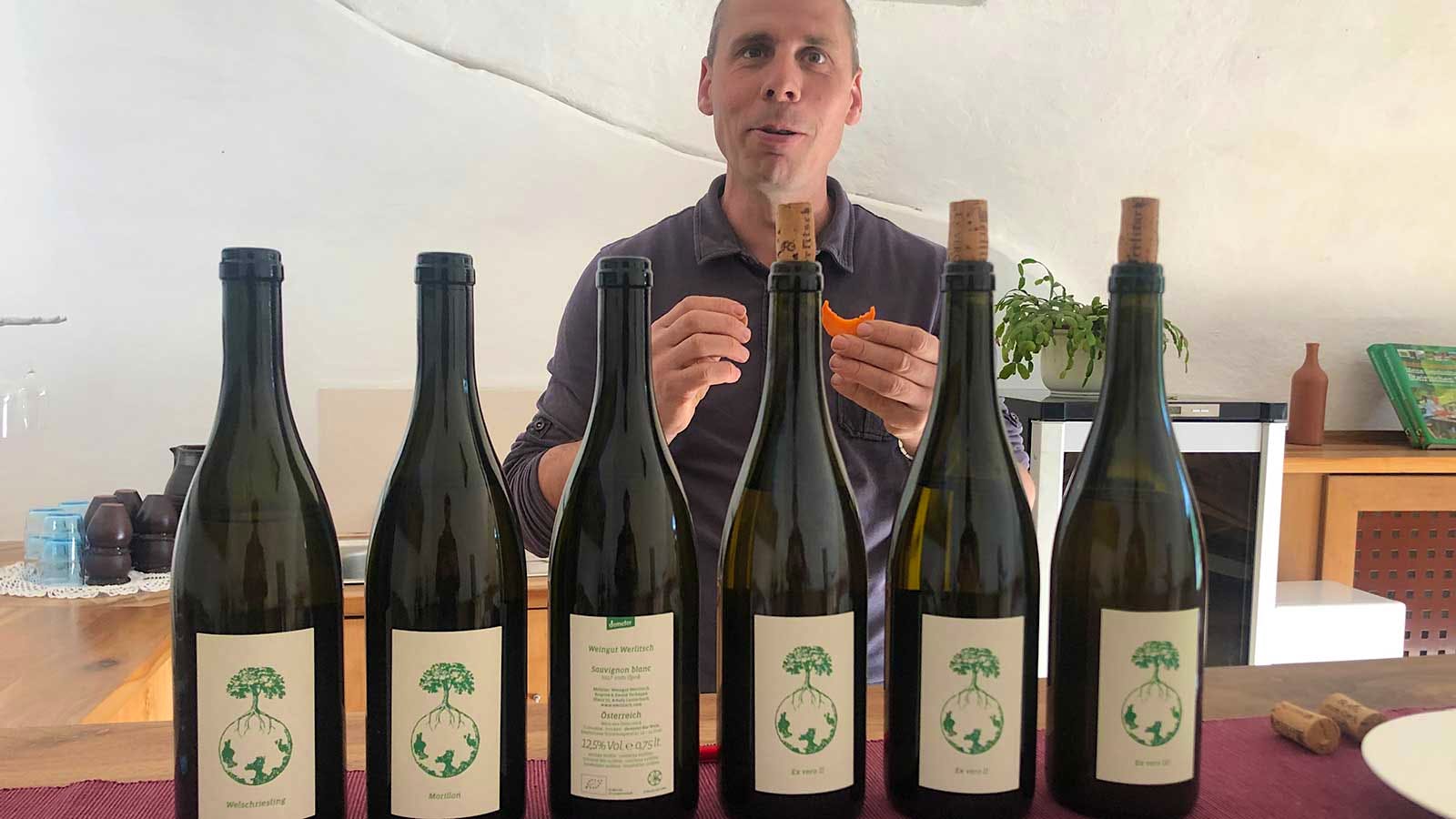 In addition to his wines, Ewald Tscheppe offered a taste of two carrots—one organic, one biodynamic—to illustrate how the farming practices influence texture. (Aleks Zecevic)

Andreas & Elisabeth Tscheppe (Andreas is Ewald's brother) is another of the Schmecke das Leben crew in Sudsteiermark making wines with striking complexity. Andreas' farming philosophy is similar to that of his brother's, with an emphasis on vineyard biodiversity, and his wines are named for the creatures he finds roaming among the vines. Andreas’ wines are more up-front than his brother’s, with a focus on floral aromatics and exotic flavors. His Sauvignon Blanc-Chardonnay Steirerland Stag Beetle 2017 (92, $69) has a distinct crunchy texture to the exotic spice and mineral notes.

Here in this fairy-tale corner of Austria is a group of vintners making wines unique from those found anywhere else in the world. Styria's wines, both of the traditional variety and otherwise, aren't easy to find, but I promise they're unlike anything you've ever tasted before.

8 Vivacious Oregon Wines Up to 92 Points

Discover Willamette Valley and beyond with these new reviews of lively Pinot Noir, …

New reviews of impressive reds from Napa, Sonoma and beyond, all rated 90 points or more …