It's a story as old as the wine biz: Young next-generation member of a winemaking family has supposedly greater aspirations than running the family business, leaves town and makes a different life but eventually becomes disaffected and returns to the farm after his starship is badly damaged, his android friend Data is killed and the planet Romulus is destroyed by a supernova. That's how it went for one Jean-Luc Picard, native of France, Earth, captain of the U.S.S. Enterprise, and long-lived-but-dubiously-prosperous vigneron protagonist of the upcoming Star Trek: Picard. In the teaser released in May, we see the vines and wines of Château Picard where the Starfleet ace seems to have retired in disillusionment. And this week brings news that fans down here in the 21st century will be able to drink bona fide Château Picard wine from the real-life Château Picard.

According to Spencer Brewer, COO of Wines that Rock, which facilitated the project, Star Trek producers had been trying for years to make a Château Picard wine. The problem and solution turned out to be the same: There already is a Château Picard, in Bordeaux's St.-Estèphe region, with its own centuries-old reputation. Earlier this year, Wines that Rock and Mähler-Besse, the company that owns the cru Bourgeois estate, finally got the ball rolling together. As they pored over what labels for a Star Trek cuvée might look like, CBS had news: A new Star Trek series was about to be shot, prominently featuring bottles of Picard's wine (e.g. Picard). Now, after a few months of wrangling with the various agencies that regulate intraplanetary alcohol trade on Earth, the Château Picard bottles with the Captain Picard labels are available to buy this week, along with a Special Reserve United Federation of Planets Zinfandel.

"We released the collector's set [of both bottles] at 10:00 [Tuesday] morning, and all 1,700 sold out by 9:00 that night," Brewer told Unfiltered from a Star Trek convention in Las Vegas. "The reaction [from fans] is instant: 'Wow, you've got to be kidding me, that really is the Château Picard from the Château Picard in Bordeaux?'" Indeed it is: the same 85/15 Cabernet Sauvignon/Merlot 2016 Château Picard bottled under the château's normal label, though the Jean-Luc label bears the vintage 2386. "It is quite fun to work on such a project, since this is not necessarily what we are used to in the industry," Mähler-Besse rep Patrick De Abreu told Unfiltered via email.

For making the Zin, Brewer also had a vision: "If you're going to go to a Federation dinner or a representative meeting of all the planets 200 years in the future, what would people be proud of to serve on the table?" he explained, ultimately deciding it would be a three-vineyard Dry Creek Valley old-vine blend. The bottle, a tapered cuboid that stands two inches taller than its Bordeaux counterpart, had to be filled and corked by hand, as 21st-century technology has not produced a bottling line advanced enough to process it. That wine hasn't gotten any screen time—yet. Picard is still filming, and, Brewer told us, the series prop director has a few bottles to use on set. As the good captain himself once said, things are only impossible until they're not.

"We're up to no good," Bryan Cranston said, smiling as he and Aaron Paul worked behind the bar at the Napoleon House in New Orleans' French Quarter. The duo, famous for their roles as meth entrepreneurs Walter White and Jesse Pinkman on Breaking Bad, were in town on July 19 during the Tales of the Cocktail convention to promote a different sort of stimulant: Mezcal. They have partnered on their own brand, Dos Hombres. 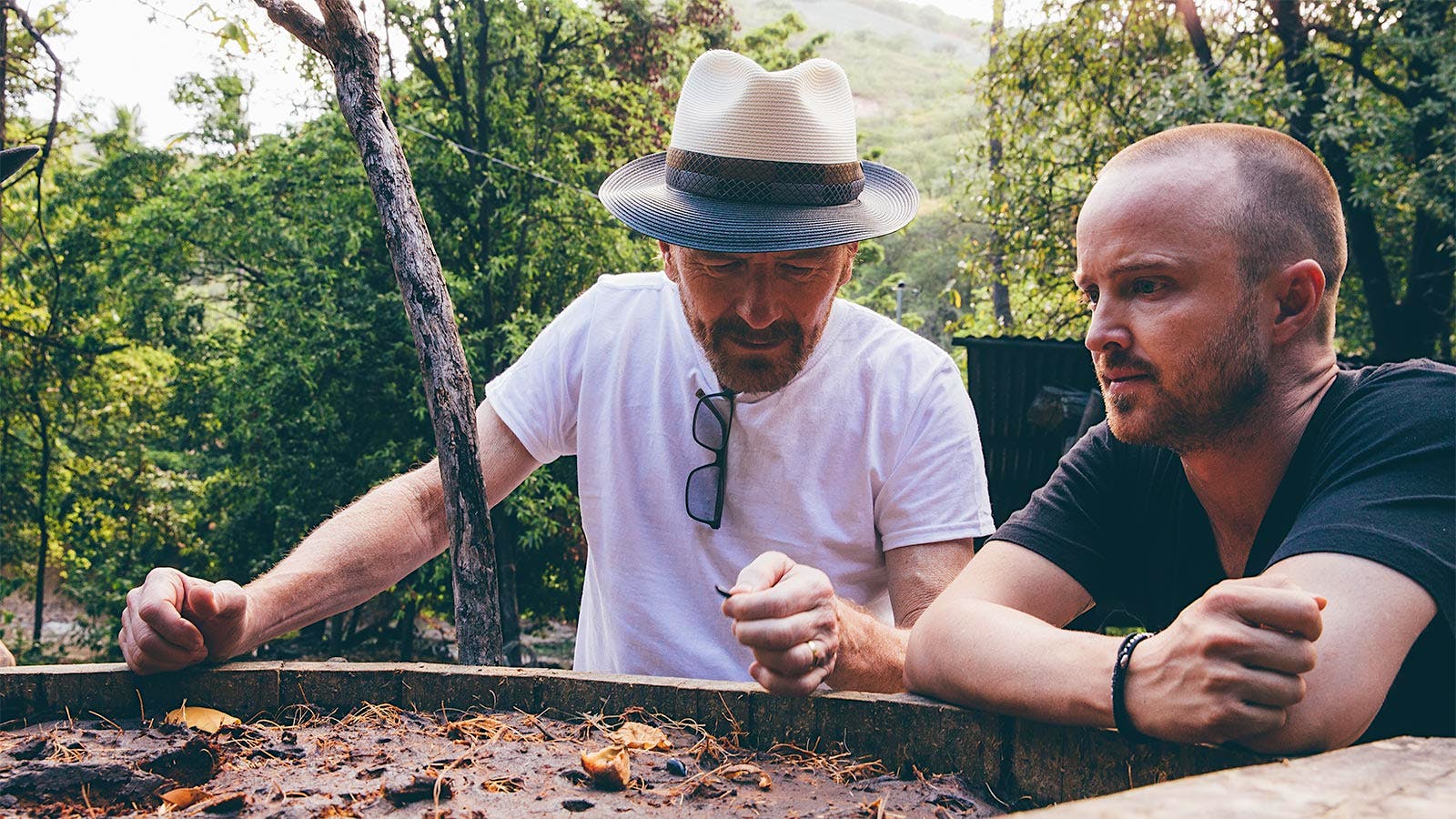 Breaking Bad went off the air in 2013, but Cranston and Paul became good friends during the show's run. "We realized, they're not going to cast us together for a few years," Cranston told Unfiltered. "But we wanted to keep working together." Paul suggested Mezcal; he was a fan of the Mexican agave spirit. Cranston admits he hadn't tried it in years, but was intrigued. So the Mezcal hermanos took a research trip to Oaxaca, touring various distilleries. Eventually, they partnered with a 200-year-old family distillery in San Luis del Rio to produce Dos Hombres.

At Napoleon House, the duo shook drinks behind the bar with Ralph Brennan, who owns the historic tavern as well as other notable local spots like Brennan's. Fans lined up for a block outside for the chance to sip a cocktail prepared by Cranston or Paul and snap a selfie. 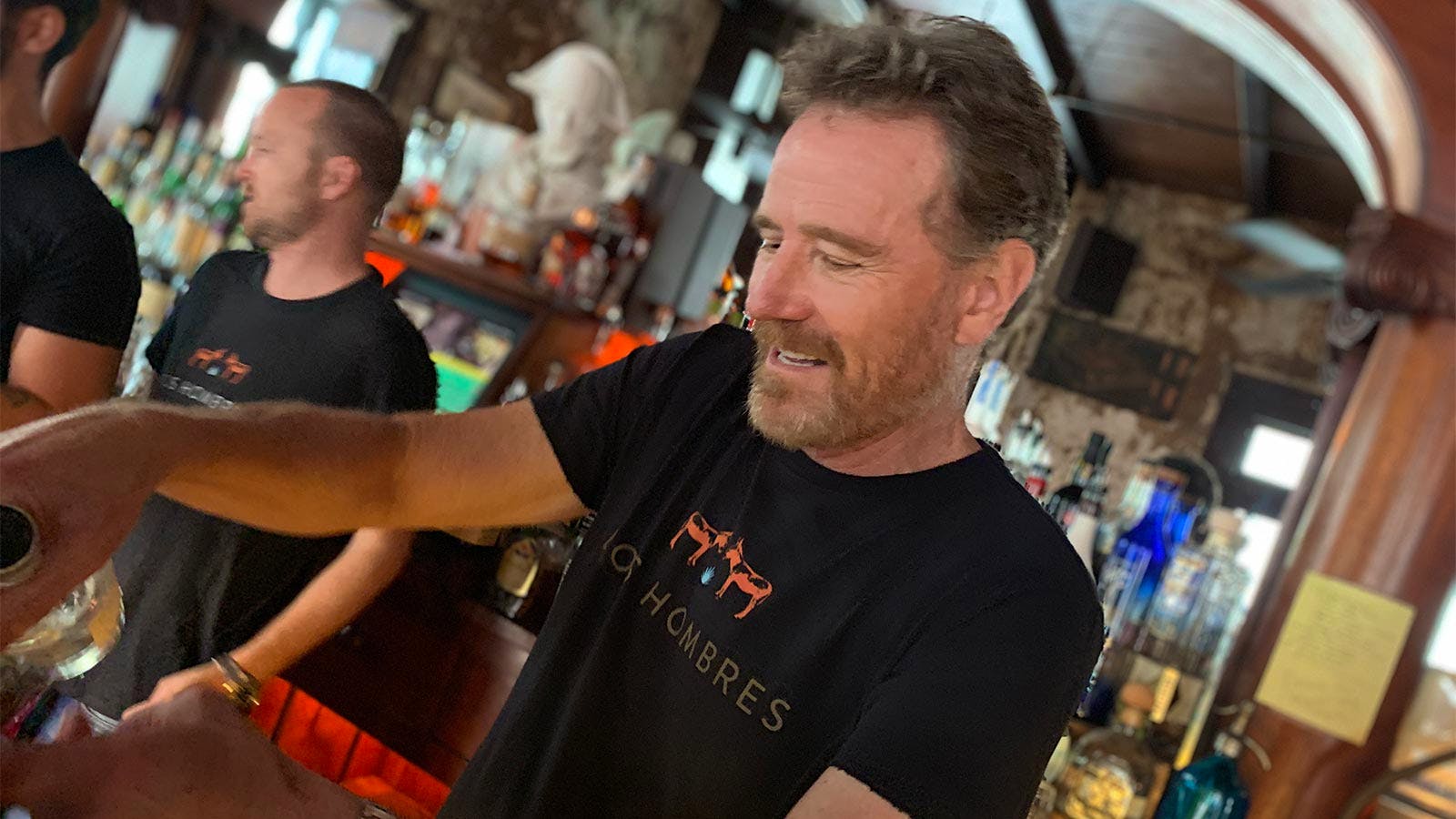 Cranston appeared to be having a ball. "I'm at the point in my career where I'm only going to work on things I enjoy," he said. He likened the steep learning curve of the liquor business to researching a new role. "I go into a world that I don’t know and learn what I can. This has been a lot of fun." He is, after all, the one who knocks … them back.

After months of campaigning, four debates, and the announcement of 20 billion candidates for president, the issue that is most important to Unfiltered and our avid readers finally came up during the Democratic debates Part 2, Part 1, on July 30. That is, of course, the universal right for all people to have access to alcohol.

About an hour into the slogfest, between candidates telling each other just how wrong they were about less important issues, South Bend, Ind., Mayor Pete Buttigieg cut through the noise and spoke truth to power. "People look at me funny as if this country were incapable of structural reform," he said while arguing for constitutional action on various woes relating to democracy or somesuch. "This is a country that once changed its Constitution so you couldn't drink, and then changed it back, 'cause we changed our minds about that. You're telling me we can't reform our democracy?"

While Unfiltered was, as always, thrilled to hear a shout-out to beverage alcohol legislation, we must do our due diligence here by doing a quick fact-check: The 18th Amendment of the Constitution didn't actually outlaw drinking itself. It said that the "manufacture, sale or transportation" of alcohol was illegal. We believe this deserves two Pinocchios on the Washington Post's four-Pinocchio scale, but we're not really in the business of scoring constitutional arguments (yet?).

A viral movement to raid Area 51, a U.S. Air Force base in Nevada where secret extraterrestrial intelligence is almost certainly hidden by the government, gained some attention in recent weeks, and brands are on it! Last month, Bud Light (the official Beer of Space) teased a new “extraterrestrial logo” via Twitter, and with over 40,000 retweets, the design might be hitting shelves soon. 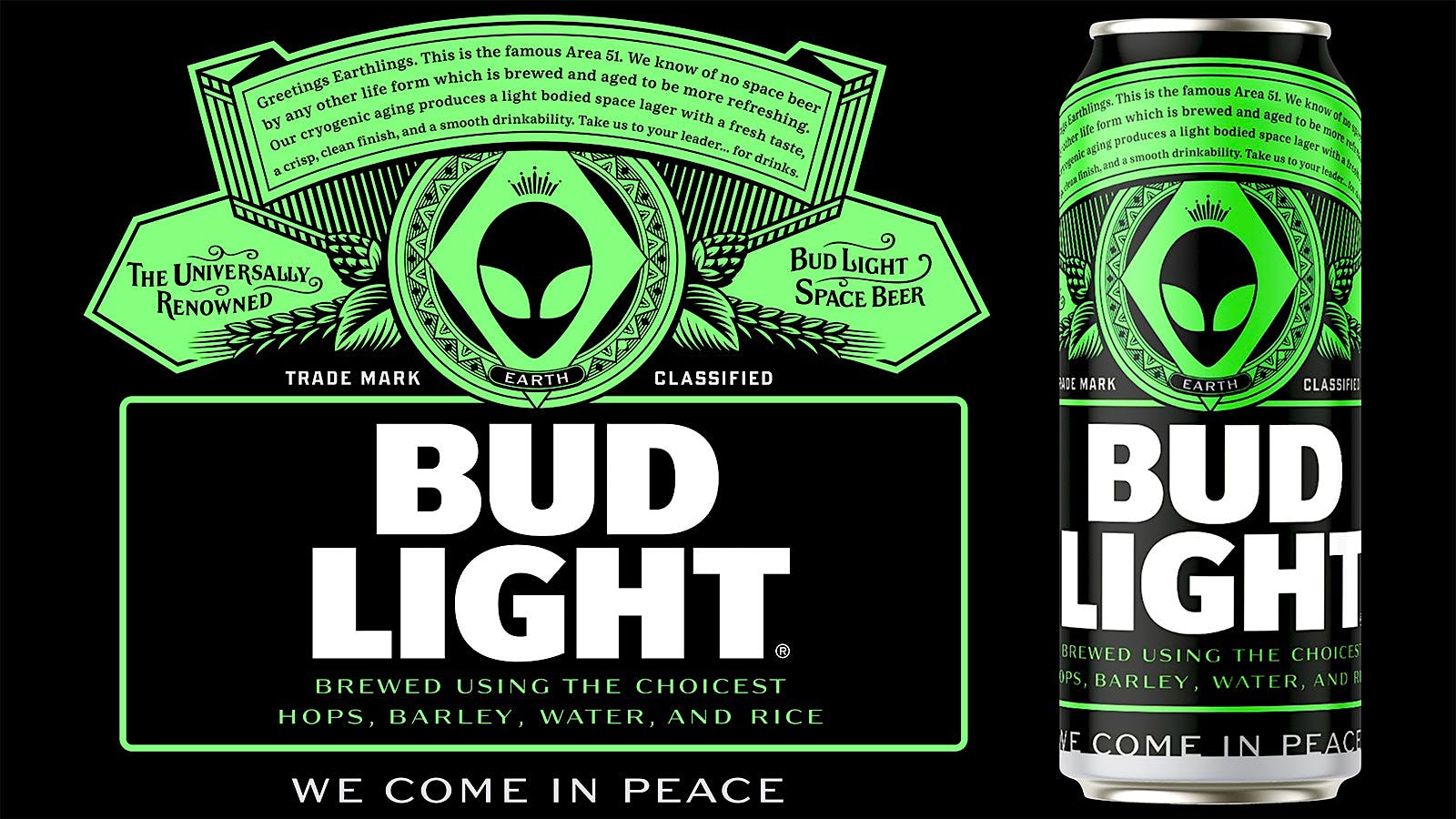 For now, the beer of taking up arms against the government remains Sam Adams. (Courtesy of Bud Light)

“We set the challenge of 51,000 retweets to make the can a reality," Bud Light director of digital marketing Conor Mason told Unfiltered via email. To further show that they come in peace, Bud Light is offering free beer to “any alien that makes it out.” Alien costumes might get you a free 12-pack, but is it worth a stand-off with the United States military? “Our hope is that no one intrudes on government operations,” Mason told Unfiltered, “and if aliens do happen to come to Earth anytime soon, we will have beer waiting for everyone.” Unfiltered naturally pressed Mason on whether Bud Light believes in aliens. “Why would we make a special can if we didn’t?”