In Italy, the world's largest wine-producing nation and the country hit hardest by deadly COVID-19, the pandemic hasn't halted work in a spring season that has arrived early.

Italy began a mandatory quarantine of its 60 million residents on March 9. And the death toll—more than 6,000 people as of March 23—has yet to abate. There were more than 63,900 confirmed cases of COVID-19 in the country, as of March 23. The industry learned on March 20 that Giacomo Bersanetti, 63, a famed designer behind labels of wineries like Gaja and Ceretto, passed away in Bergamo of the disease.

Only essential businesses like food sellers and pharmacies are open, while some industries continue to operate in low gear with heightened safety measures. Veronafiere, which operates the annual international trade show Vinitaly, officially cancelled the event for this year after earlier postponing it.

But against that grim backdrop has arrived a succession of warm, sunny days bringing early budbreak to vines, weeks before normal.

In interviews this week, more than a dozen wine producers from across Italy described wineries in which skeletal staffs performed bottling and other essential tasks wearing protective masks and gloves and disinfect the cellars nightly. At the same time, vineyard crews worked at full speed outdoors, where there is a smaller chance of viral spread—finishing pruning, debudding and tying up vines while careful to practice ample distancing.

"It is impossible to stop the work in the winery and the vineyards because nature is working anyway," said Sabrina Tedeschi of the Valpolicella producer Tedeschi.

"Spring is one month early," observed Chiara Boschis of Barolo's E. Pira e Figli. "Luckily we have the vineyards, because staying home like in a prison is depressing."

Who will buy wine?

With Italy's restaurants, bars and wine outlets closed, the domestic wine market is all but shuttered. And the rest of Europe as well as the United States remains tentative.

"For sure this is not the time to have parties with bubbles," said Maurizio Zanella, founder and president of sparkling wine producer Ca' del Bosco in Lombardy's Franciacorta, which lies close to the epicenter of Italy's deadly outbreak. "Travel will be a complete loss this season. In wine and business in general, those who did not do things in a professional, serious way will have difficulty to restart. I am sad to say this, but there will be a cleaning of the market."

The immediate challenge is distribution. Italians not directly affected by the virus have taken to social media for virtual aperitivo hours. With wine stores closed, supermarkets are the only real wine retailers.

"Small producers that are not in mass distribution have to fight to survive," said Giampaolo Tabarrini, the noted Montefalco Sagrantino producer.

Montefalco's more than 100 producers of the local consortium are scheduled to join a video conference "Splash Mob" Sunday night to brainstorm, including ways to get wines to holed-up consumers. "We are in deep shit, and we have to dig out of it," Tabarrini said.

One answer is direct and online sales. The Italian online retailer Tannico has teamed with more than 20 wineries to donate 1 euro for every bottle sold to a Milan hospital.

Aglianico del Vulture producer Elena Fucci is planning to introduce the 2018 of her sole wine, called Titolo, on social media. "We are going to tell the story of the year," she said. 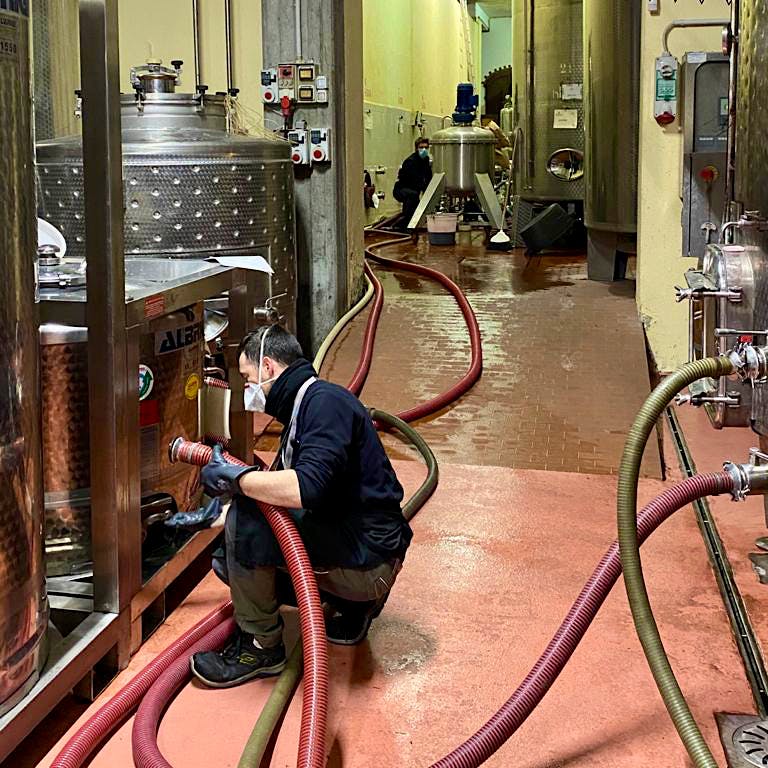 At the Tedeschi winery in Valpolicella, the limited number of workers service tanks while keeping a safe distance from each other. (Photo courtesy of Tedeschi)

Normally she would release the vintage at the Vinitaly wine fair in Verona in April. That event has been delayed until mid-June, but Italian winemakers overwhelmingly expect it to be canceled for the year. To many, planning a wine fair in Verona seems impossible given that the Milan fairgrounds, less than 100 miles to the west, is being used to house a new makeshift hospital to treat victims of the coronavirus.

On Sicily's Mount Etna, Alberto Aiello Graci of Graci, assumes "the market will stop this year." Graci said that many Etna producers will use the decreased demand to focus on ever higher quality. "We are working in the vineyards to lower yields to make this the best vintage ever."

Giovanni Manetti of Chianti Classico's Fontodi bottled his 2017 vintage this week, and said that orders were restarting in Asia, including parts of mainland China, as well as Hong Kong Japan and South Korea. "It's a sign of hope," Manetti said. As president of the Chianti Classico Consortium he is studying new campaigns to relaunch the emblematic appellation at crisis' end. "We will need a sort of renaissance."

Until then, Italians are bracing for tough times—even if the spread of the virus is controlled in spring and the quarantined lifted. "This will be a summer when Italy has to work," said Antonio Capaldo of Campania's Feudi di San Gregorio. "It's not going to be two months of vacation."

The most enduring economic pain is likely to be felt in Italy's $200 billion-per-year tourism industry along with its restaurants and bars.

"Italy will need a Marshall plan to restart the economy," Matteo Lunelli of the Lunelli Group and his family's upscale sparkling producer Ferrari predicts. Lunelli is president of Altagamma, a collection of Italian luxury brands that is pressing the government to provide relief for the most fragile family businesses in its supply chain—from fashion to restaurants.

"For Italy and society I hope that at Christmas time we will have a different situation," he said. "I am proud to see that many Italians are showing unity and solidarity. If we keep this sense of unity as a country I am confident that we will get out of this crisis stronger than before."