The streets of Rome are empty, with only a few people reportedly walking by the Spanish steps, the Coliseum and the Trevi fountain. The Vatican closed St. Peter's Square to visitors. Police told tourists walking the streets to return to their hotels. As COVID-19 continues to spread through Italy and around the world, Italian Prime Minister Giuseppe Conte took the extraordinary step on March 10 of locking down an entire nation for the next three weeks, hoping to bring the coronavirus infection rate there under control.

"The whole of Italy will become a protected zone," he told citizens as he addressed the nation. "We all must give something up for the good of Italy. We have to do it now."

On March 12, the government tightened the lockdown. All businesses must be closed, except for food stores, pharmacies, tobacconists and newsstands. Restaurants must all be shuttered. In an address from the Oval Office the previous night, U.S. President Donald Trump announced that the U.S. would bar travelers from 26 nations in the European Union, except for U.S. citizens and permanent residents, for 30 days. The order does not apply to trade.

Bordeaux's annual tasting of the latest vintage has also fallen victim. On March 13, the Union des Grands Crus de Bordeaux (UGC) announced that the En Primeurs week scheduled to take place at the end of March has been postponed. "Our teams are currently working on finding solutions that will enable us to taste the 2019 vintage at another time. We will provide details of this as soon as the context deems it fit," said UGC president Ronan Laborde, in a statement.

Public health officials are scrambling to slow the spread of the disease, hoping to keep it from overwhelming hospitals and medical workers. National and local leaders are struggling with deciding how much to restrict their citizens to protect health without inflicting too much economic and social harm.

For the travel, dining and wine industries, the economic pain is growing. Airlines have been cutting back on flights and suspending fees for passengers looking to change their travel plans, particularly to China, Italy and South Korea, which have the highest number of cases. Major hotel chains, including Marriott, Hilton and Hyatt, have been suspending many fees for customers changing their reservations.

The cruise ship industry has been particularly hard-hit. The U.S. state department has issued an alert advising U.S. citizens, particularly those with health conditions, to avoid travel by cruise ship, due to the higher risk of the disease spreading on-board and because many countries being visited by the ships have been blocking or quarantining passengers.

Carnival Cruise Line announced on March 12 that its Princess Cruises division, which includes 18 ships, will pause operations for 60 days. Two of those ships had been quarantined offshore in the past month,

In Italy, tourism has effectively come to a halt, hurting restaurants, hotels and wineries. The new rules ban all unnecessary travel within the country and all large public gatherings until at least April 3. Museums and historic sites are closed, and weddings have been suspended. Many economists believe the already weakening Italian economy will soon be in recession. Bars and restaurants were initally allowed to stay open, but only from 6 a.m. to 6 p.m. Now all must be closed.

In the U.S., Washington, California and New York have reported the largest number of cases, but the virus has been found in 34 states as of today. That is expected to rise as the Centers for Disease Control (CDC) begins increasing testing.

Wineries have not seen a heavy impact yet. Several Washington winemakers who run tasting rooms in the Seattle area reported a slight dip in visitors. But they worry that sales will slow as restaurants suffer. 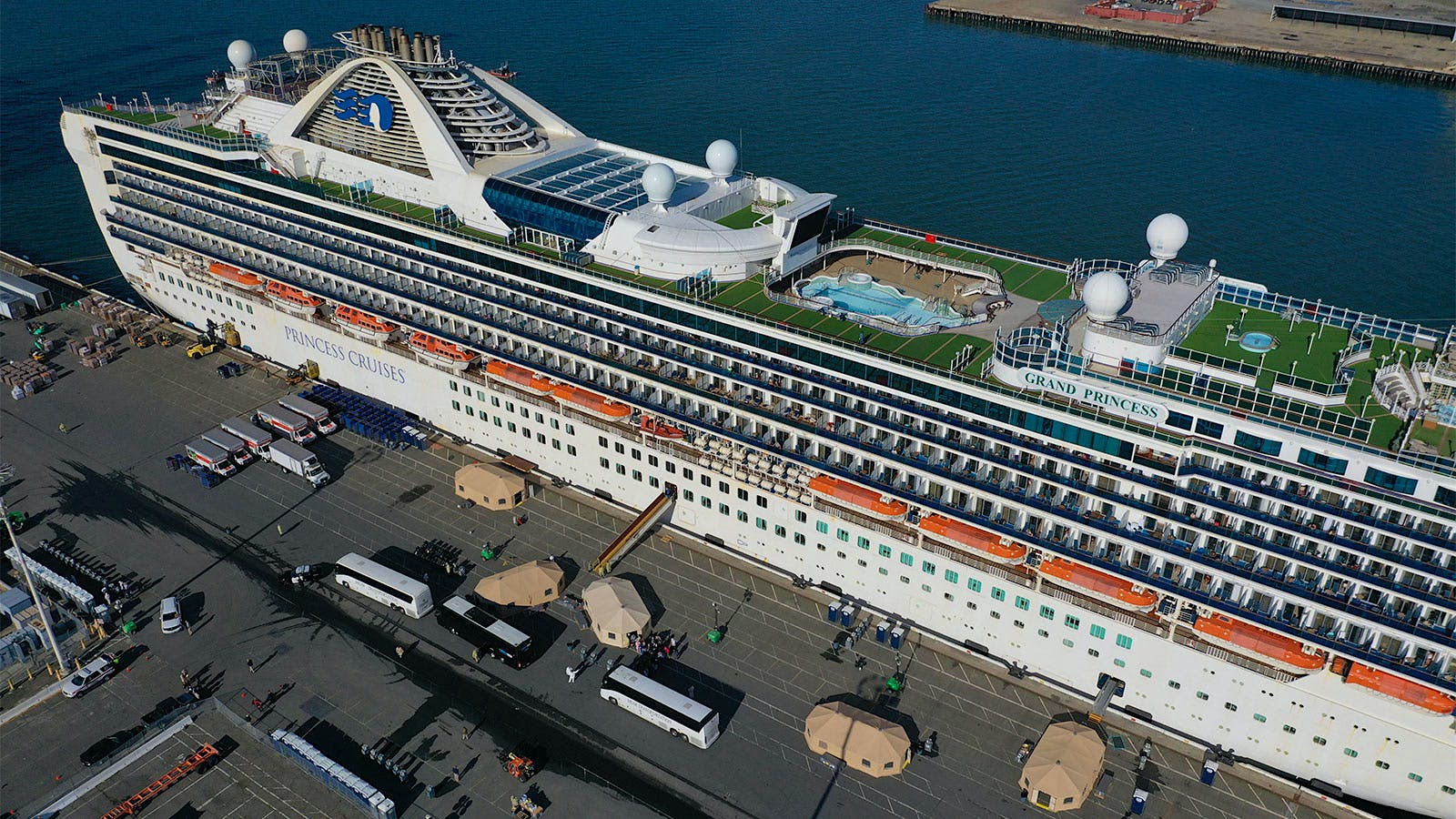 Passengers from the Grand Princess were finally allowed to disembark in Oakland yesterday, as health officials screened them. (Justin Sullivan/Getty Images)

Restaurateurs in Seattle, San Francisco and New York tell Wine Spectator that business has been down between 20 to 50 percent. In New York, the Modern, a Grand Award winner, closed last night for a full cleaning after learning that Rick Cotton, executive director of the Port Authority of New York and New Jersey, had tested positive for coronavirus. Cotton had dined at the restaurant last week.

Tilman Fertitta, CEO of the Houston-based restaurant corporation Landry's Inc., told CNBC a few days ago that his 600 restaurants were losing about $1 million per day due to the coronavirus worries, particularly in units located in urban and popular tourist areas where conferences have been canceled or postponed.

Canceled conferences have probably had the most impact on restaurants and hotels so far. South by Southwest in Austin, Texas, Facebook's F8 Conference in San Jose, Calif., Ted Talk 2020, and numerous other industry conferences have all canceled or postponed their events for this year, denying restaurants of millions of dollars of potential business. Smaller wine festivals have also been canceled, including Taste of Washington and Taste of Yountville in Napa Valley.

In the Seattle area, restaurants have seen a significant drop in business. There are close to 167 cases in the state, most in the greater Seattle area. Many employers have asked staff to work from home and schools have closed.

"We have seen a significant change in business levels, most evident in our downtown locations as an increasing number of workers begin to work from home," said Sennen David, vice president at the Ethan Stowell restaurant group, which owns more than a dozen area restaurants. "Neighborhood locations seem to be less affected at least for the present. There is still so much uncertainty and accompanying fear that it is hard to forecast how these changes are going to evolve day to day much less week to week."

Like many restaurant companies, Ethan Stowell is focusing on staff issues. "We offer all of our employees universal paid time off days so that no team member ever has to come to work when they are ill." While many companies are urging their employees to work at home, that's not an option in the service industry. And most restaurants do not offer paid sick leave, forcing workers to choose between staying home and earning a paycheck.

About the only bright side David and other restaurateurs see right now is that they are aggressively expanding their delivery options. But that cannot make up for regular business. And for now, the uncertainty of the epidemic may be having the biggest economic impact.

—with reporting by Robert Camuto and Augustus Weed