The road to 2019’s Beaujolais Nouveau Day has not been the smoothest, but thanks to the efforts of many—from grapegrowers to importers—fans of the festive wines will not be disappointed.

A French celebration that was once local but now reaches a global audience, Beaujolais Nouveau Day, the third Thursday of November, marks the first wines of the new vintage and gives wine lovers a glimpse into what they should expect from the more serious Beaujolais wines that will be released the following year. The Gamay grapes for Beaujolais Nouveau are typically vinified by carbonic maceration, which accentuates the fruity flavors and light-bodied character of these charming, easygoing bottlings.

In my blind tasting today of Nouveaus imported into the United States, overall, I found lots of classic Gamay character and charm, with a mix of bright red and black fruit flavors accented by herb, white pepper and floral notes. (See below for my scores and tasting notes for a dozen 2019 Beaujolais Nouveaus.) 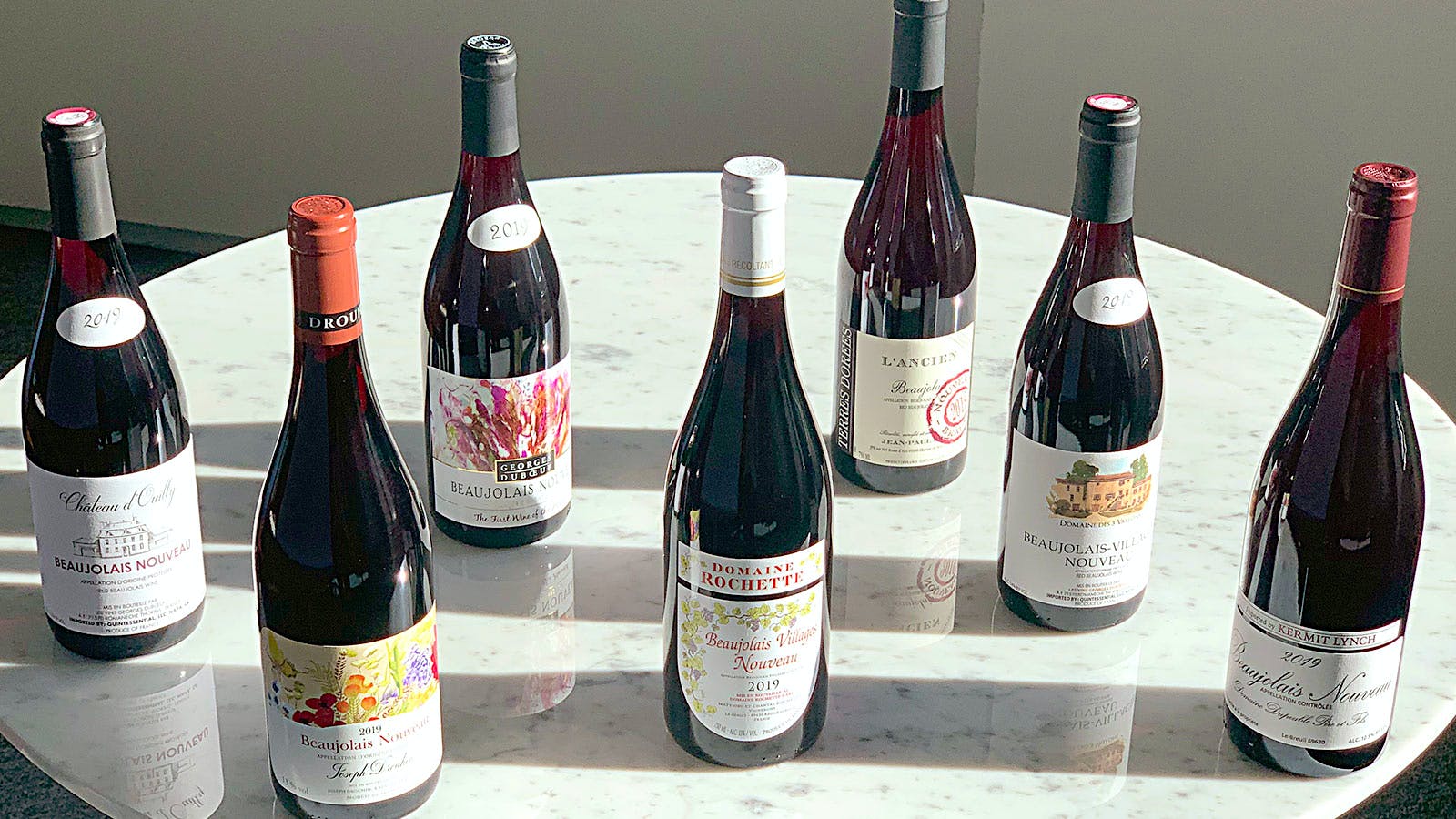 This year's crop of Nouveau is a triumph over a difficult growing season compounded by economic factors. (Photo by Karissa Maggio)

Leading Beaujolais producer Franck Duboeuf is not hesitant to admit that 2019 was difficult for Beaujolais winemakers and grapegrowers. “It was not an easy growing season," he explained. "After a cool winter, spring arrived early. Unfortunately, the temperature plunged below freezing in April, causing frost in vineyards throughout the region. And then after the frost, we had a heat wave.”

Making matters worse, an intense storm in mid-August brought on harsh winds, heavy rain and hail that destroyed 3,700 acres of crop in the southern part of the region, decreasing total production by as much as 30 percent.

Despite turbulent weather conditions, Duboeuf said that there was still optimism going into harvest, which began Sept. 9, “The weather shaped the vintage," said Duboeuf. "Maybe we started off on the wrong foot in the beginning, but at the end we are extremely pleased with the quality of this vintage. It's very well-balanced.”

For Duboeuf’s team, the first bottling of the Nouveau wines began Oct. 10. It was only a few days into this critical stage of the tight timetable that the U.S. announced a 25 percent tariff on wines from France, Spain, Germany and the U.K., with the exception of sparkling wines, large-format bottles and wines over 14 percent alcohol. There was no question that Beaujolais Nouveau was going to get caught up in the middle of the political crossfire.

“It was a tough moment, the worst moment for us, because we had only 48 hours to really react to the decision,” Duboeuf recalled. “We have contracts and we have also moral obligations with our growers. So there was no questioning that we wouldn’t reduce our volume because of this bad situation. The growers worked hard the whole year; they produced a fantastic vintage of grapes. We needed to find a solution.”

The solution was a team effort between Duboeuf and Steve Kreps Sr., co-owner of Quintessential, Duboeuf’s U.S. importer. “What we agreed to do is help with the pain,” said Kreps. “Quintessential is taking about 33 percent of the loss of the tariff, and the winery has agreed to do that with us. So now you’re looking at about 67 percent of us personally eating that tariff, which amounts to millions of dollars.” Kreps notes that some distributors (not all) agreed to help maintain consistent retail prices and that Quintessential “cannot dictate to distributors what they can sell wine for. So we've eased the pain quite a bit and taken it on personally.”

Other importers and wineries, though, either don’t want to or can’t take on this kind of financial hit. Louis Latour, for example, cancelled their U.S. shipments. However, it’s still too early to understand what impact the tariffs will have on total sales of Beaujolais Nouveau wines in the U.S. this year. For the wines reviewed in my tasting, however, pricing ranged from $11 to $20 per bottle, with an average price of $15.

Other standouts from the tasting include Jean-Paul Brun’s Beaujolais Nouveau Terres Dorées l'Ancien Vieilles Vignes 2019 (88, $17), which offers an appealing rose petal note accenting the medley of bright fruit flavors as well as the Domaine de la Madone Beaujolais-Villages Nouveau 2019, a great value at $12 and 86 points.

To best enjoy these wines, serve them at a chilled temperature, similar to a white wine. And given the refreshing charm and acidity that these 2019 Nouveau wines offer, these can be paired with a variety of entrées such as roast chicken with herbes de Provence, duck à l’orange or even turkey with cranberry sauce.

WS review: Brimming with raspberry, citrus and cherry notes, interwoven with licorice and spice accents, this refreshing red is structured by light tannins that linger into the juicy finish. Drink now. 5,000 cases imported.—G.S.

WS review: Plump in texture, with lots of juiciness to the candied cherry and raspberry notes, mixed with tangerine, floral and spice details. A touch of herb shows on the finish. Drink now. 10,000 cases made.—G.S.

8 Vivacious Oregon Wines Up to 92 Points

Discover Willamette Valley and beyond with these new reviews of lively Pinot Noir, …