In 2019, worldwide wine-auction totals (including sales conducted in the U.S., U.K., Geneva and Hong Kong, plus online sales) rose to $521 million, up a solid 9 percent from $479 million in 2018. That's bullish, but not quite as dramatic as 2018's 26 percent surge. The last quarter of 2019 more than matched the impressive performances in the first half and third quarter of the year.

Burgundy continued to boom, while Bordeaux remained a solid draw. But the biggest surge came from the small but growing market for rare spirits.

Among the major auction houses, Zachys led the pack with a substantial $121.5 million in overall sales (up 51 percent over 2018), followed by Sotheby's at $118 million and Acker at $92.6 million. For the ninth year in a row, Hart Davis Hart sold 100 percent of their lots on offer. The 159th Hospices de Beaune wine auction in Burgundy achieved $14.6 million inclusive of the buyer's premium, down from the 2018 total of $16.2 million, according to Christie's London, which orchestrated the November sale.

Notably, the top-selling alcohol lot of the year was not a wine but a whiskey. At Sotheby's London in October, a bottle of The Macallan Fine & Rare 60-Year Old 1926 set an auction record for any wine or spirit, selling for a whopping $1.9 million, far surpassing its presale high estimate of $550,000. The bottle was part of the first single-owner whiskey collection sold by Sotheby's, entitled "The Ultimate Whiskey Collection," which grossed just under $10 million in sales, the highest total for any whiskey collection ever offered at auction.

Bidders chased after Scotch milestones in every format: a rare 30-year whiskey Sherry hogshead cask (approximately 250 liters) from Macallan sold in November at Bonhams Hong Kong for a record $572,000 and a 1989 Macallan hogshead sold for $527,000 at Acker Hong Kong. A 1997 Bowmore Single Malt Scotch Whisky Refill Oloroso Cask 2409 brought $210,800 at Acker Hong Kong last May. Acker chairman John Kapon observed that his top lots of the year reinforced the increasing importance of fine and rare spirits in the auction scene.

On Nov. 9 in Hong Kong, Acker (formerly known as Acker, Merrall & Condit) showcased the highly sought-after wines of Jean-Louis Chave, the celebrated Rhône vintner. "The results were out of this world," Kapon told Wine Spectator via email. Highlights included the Hermitage Rouge 1945, which sold for $24,164 per bottle, and the Ermitage Cuvée Cathelin 2010 at $8,478 per bottle. A new record was set for three bottles of Ermitage Cuvée Cathelin 1990, which brought $41,333.

Of the top wine lots sold at Acker auctions in 2019, six of the positions were occupied by Domaine de la Romanée-Conti (DRC) Romanée-Conti, with one 12-bottle lot of the 2005 vintage commanding $248,000 in Hong Kong on Dec. 5. Less dramatic but relatively more accessible were a variety of offerings sold at Acker's "Friday Night Lights" auction in New York on Oct. 18. A dozen bottles of Harlan Estate Red 2001 sold for $5,580 against an estimate of $4,200 to $6,000 and five bottles of Giacomo Conterno Barolo Monfortina Reserva brought $9,424 against an estimate of $9,000 to $12,000.

On Oct. 10, Christie's New York garnered solid prices for lots of Pétrus. Six magnums of the 1989 vintage brought $43,750, as did a case of the 1990. The highlight of their December consignment was a major collection of Château Lafite Rothschild spanning the 1960 to 2016 vintages. The showstopper was a case of the 1982 vintage that traded for $32,500.

Despite the sea of Burgundy that flooded the market, Bordeaux prices held firm. Hart Davis Hart held their sixth annual "A Celebration of Bordeaux" auction on Nov. 15 and 16. Large-format bottles engendered heated bidding. A 5-liter jeroboam of Château Latour 1961 sold for $41,825 against a top estimate of $30,000 and a 6-liter imperial of Pétrus 1989 garnered $45,410 against a top estimate of $38,000. In the historical curiosity department, a six-bottle lot Château Cheval-Blanc 1939 (plus lunch at the château) sold above estimate for $26,290.

That's not to suggest HDH overlooked premium Burgundy. In December, several wines from Domaine Leroy sailed above their top estimates. Three bottles of Musigny 2011 fetched $57,360 against an estimate of $35,000 and four bottles of Chambertin 2001 brought $28,860 against a high estimate of $22,000. HDH ended the year with $58.4 million in live sales and $10.1 million in mobile only auctions.

Burgundy was the clear winner at Zachys New York sales. In early October, 12 bottles of Domaine Ponsot Clos de la Roche Cuvée Vieilles Vignes 1985 sold for $111,150 against a high estimate of $80,000. In late October, bidding on a major consignment from veteran British collector Ian Mills was particularly fierce. Six magnums of Armand Rousseau Chambertin-Clos de Bèze 2005 brought $74,100, just below the top estimate. A magnum of DRC Romanée-Conti 1991 sold for $51,870, topping the previous world record by over $10,000.

Where can you order wine from? Check out Wine Spectator's comprehensive guide to state shipping laws.

At Zachys' Holiday Auction in December, a three-pack of DRC Romanée-Conti 1999 sold for $67,925. Nine of the top 10 lots in the two-day auction were from Romanée-Conti, and the other was a magnum of Henri Jayer Richebourg 1978 which sold for $49,400. Although Burgundy represented 40 percent of the sale by volume, it accounted for 56 percent of the total value.

In an interesting departure from Burgundy, the sale also featured 44 lots of rare Chartreuse liqueur from a European consignor that realized $359,385, double the pre-auction low estimate.

Clouds on the horizon?

The prospect of a 100 percent tariff on European wines, currently being considered by President Donald Trump and the Office of the U.S. Trade Representative, looms over 2020 sales. It is a major concern for American auction houses.

"I think U.S. auction prices would rise on all E.U. wines and the auction market overall will shrink," Jamie Ritchie, chairman of Sotheby's Wine, told Wine Spectator via email. "Buyers from Asia and Latin America will transfer purchases to the U.K., Europe and Hong Kong. In addition, [Sotheby's] would not bring any collections, either private or direct, from wineries in Europe for sale in the U.S., so it will limit availability and restrict supply of interesting wines."

It could also create long-term troubles. "New vintages of European wines, particularly Bordeaux and Burgundy that drive our market, would not be purchased by Americans, and the supply of younger vintages will dwindle," said Ritchie. French, Spanish and German producers are already facing 25 percent tariffs on many of the top collectible wines. A decision on raising the tariffs is expected in coming weeks. 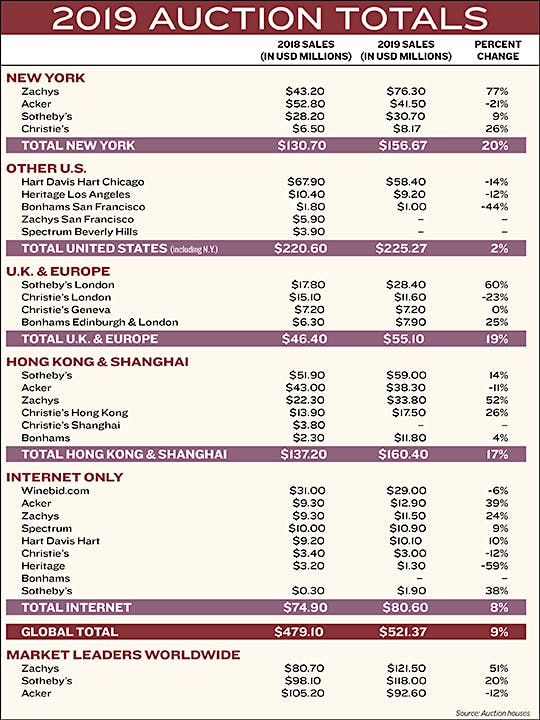 A larger version of this chart is available.

The Chefs for Unity “breaking bread challenge,” bringing together famous chefs and home …

A Sparkling Road Trip with Prosecco and an Alfa Romeo