Bobby Flay's days as a hustling Manhattan young gun or even an upstart Food Network star may be half a lifetime ago now, but at 54, the veteran toque is having a big year in 2019. In April, Flay opened his first original new restaurant concept in five years, Shark, at the Palms in Las Vegas. Next up is the debut of the longtime Iron Chef's latest Food Network adventure, The Flay List; he's sharing the spotlight with his daughter, Sophie, as they eat their way around New York. In September, Flay will be publishing a cookbook, Bobby at Home—his 11th in circulation.

"I think that I was in the right place at the right time when food became part of our pop culture," Flay reflects. "[TV] is a place where I get to showcase what I do, and let people know that I exist and that my restaurants are open for business, and we'd love to have you come in [laughs]."

Indeed, Flay continues to run numerous locations of six different restaurant concepts, where he has developed a robust wine culture at spots like Wine Spectator Best of Award of Excellence winner Bobby Flay Steak at the Borgata, in Atlantic City, N.J. Flay says of his many ventures, "I get up in the morning, I go and I cook somewhere. I think of it as all one career." 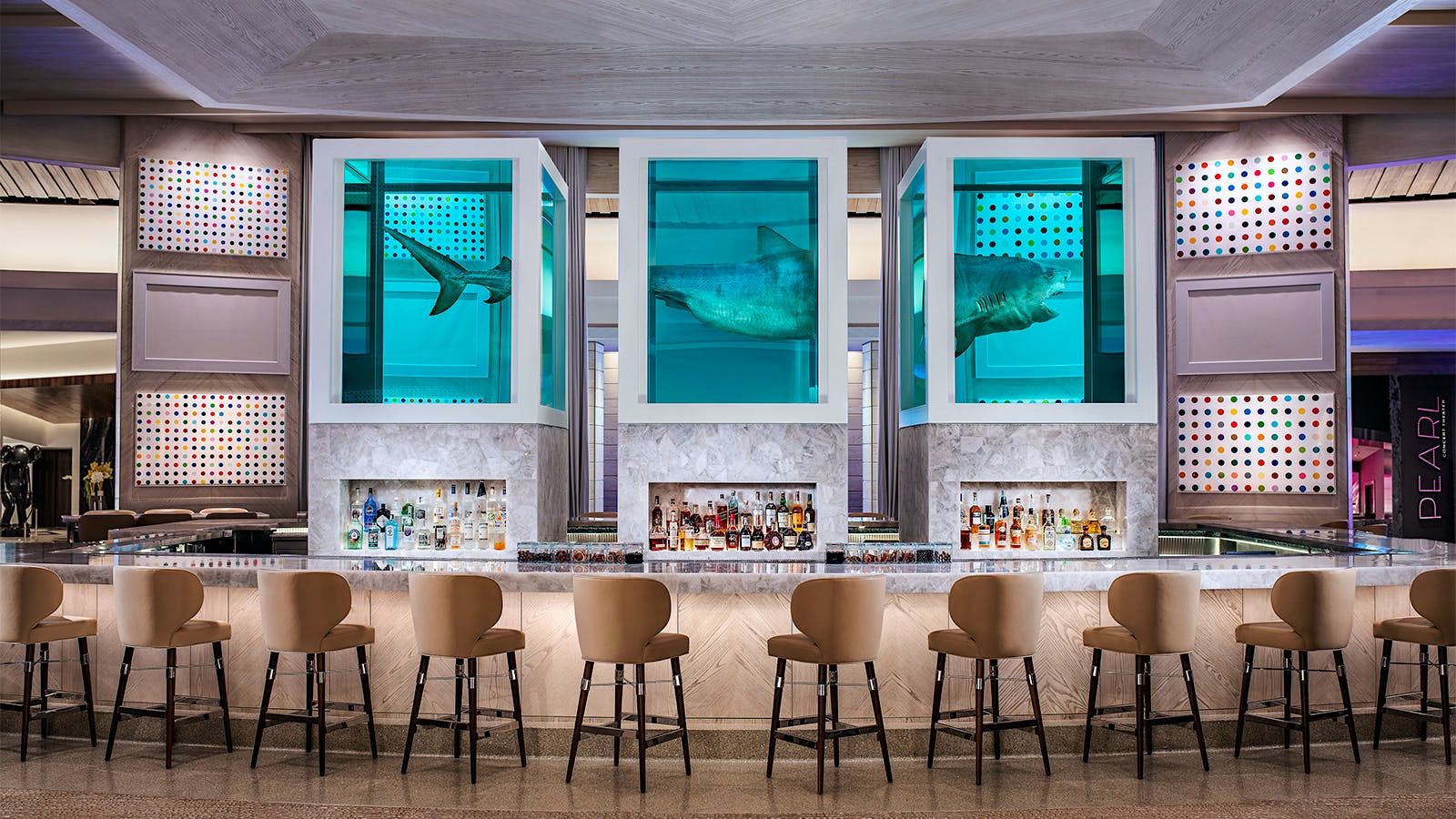 Jeff Green
Artist Damien Hirst's 1999 shark sculpture, "The Unknown (Explored, Explained, Exploded)," is the centerpiece of the Unknown Bar in the Palms.

Though Flay is perhaps best known for Southwest- and barbecue-inflected cuisine, Shark is a departure, with a focus on fish and seafood, even sushi. The name is a nod to the recently installed 13-foot-long predator carcass suspended in tanks above a bar at the Palms, a piece in artist Damien Hirst's infamous series. Flay spoke to editorial assistant Brianne Garrett about how Shark came to be, why wine pairings at all of his restaurants can be a challenge, and how his daughter, a reporter, expanded his horizons for New York City dining on their new show.

Wine Spectator: Shark is your first restaurant opening in a while. What inspired you to open it?
Bobby Flay: It actually came about because my friend [chef] Michael Symon was opening a barbecue restaurant at the redo of the Palms. I liked the idea of opening a restaurant where Michael was. We had done that once in Atlantic City, and so, because we're really good friends, it just seemed like a good idea. And I hadn’t opened a high-end restaurant in Vegas in like 15 years. I have Mesa Grill in Caesar's Palace, but it's been awhile.

We were trying to figure out what was needed for the hotel: Marc Vetri was doing Italian; they already had a steak house named Scotch 80; Michael was doing barbecue and sort of a speakeasy. It seemed like seafood was something that was needed. So I created a menu based on fish, with the flavors that I'm really used to, lots of Latin flavors, and so that's how it came about. 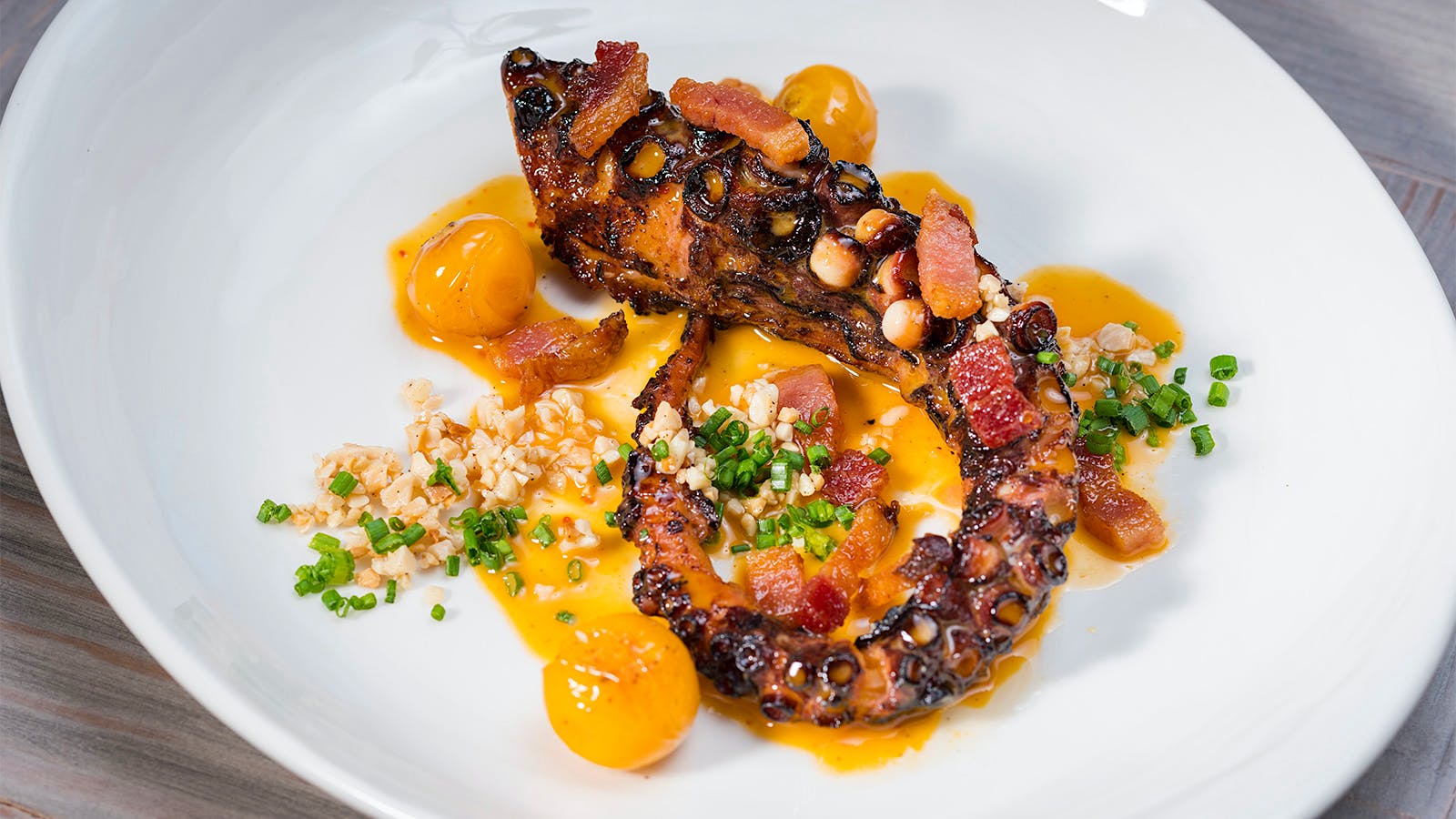 WS: How does wine play a role at Shark?
BF: A lot of times, because my food has lots of bold flavors, it's sometimes a challenge in terms of the more commercial varietals—you know, like, Chardonnays are probably too buttery for a lot of the food. We tend to go after things like Albariños and Rieslings … I'm a huge fan of Priorat from Spain, and I also like white wines from the Amalfi Coast; I like the minerality of it all. Those are the kinds of things that we think about when we're pairing wines with my food.

We're also doing some sake as well, because we have some raw fish; the menu varies from raw to semi-cooked to fully cooked fish. I'm not a sake expert by any stretch, believe me, but I like the way the sakes pair with it.

WS: What are your personal go-to wines?
BF: It all depends on the time of the year. In the summer, I drink a lot of rosé; I drink a lot of white wines from the Amalfi Coast; I drink Albariño because it goes really well with food. In the winter months, I try to seek out Priorat. A lot of people don't know to drink them, and I think that they're delicious and sort of—not underrated, because people that know them love them—but they're not that well-known.

And then in the more classic varietals, I tend to go after Pinot Noirs more than anything else, just because a lot of times the Cabernets that we're drinking these days are not aged enough and they can be a little tannic. I like something a little bit smoother. Pinots are what I usually reach for. 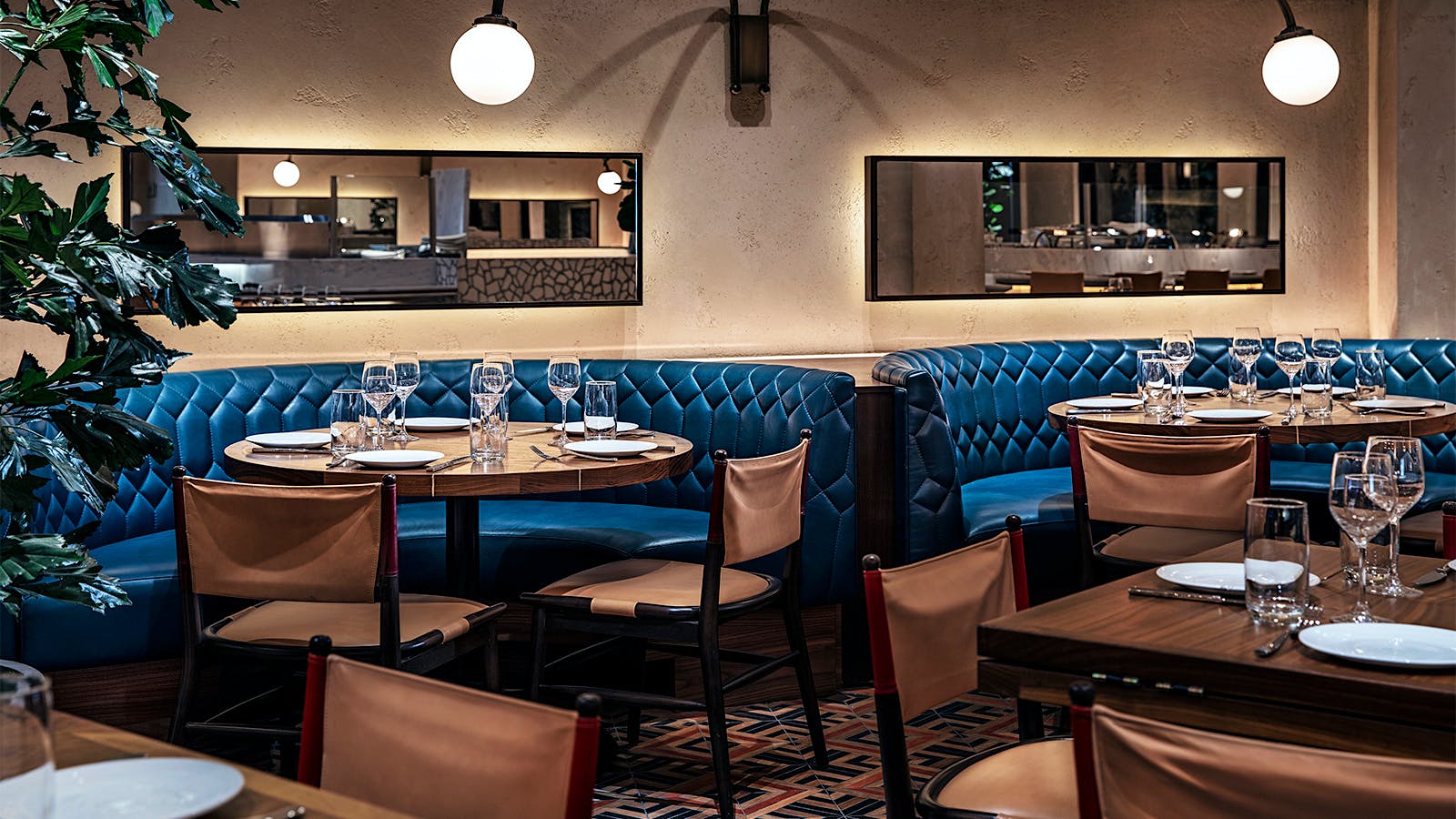 Jeff Green
The interior of Bobby Flay's Shark restaurant at the Palms in Las Vegas.

WS: You're working a lot with your daughter, including for your new show The Flay List. What are you trying to show her about the restaurant world?
BF: Sophie is not interested in being in my profession at all. She actually just graduated from college, and now she's a reporter for ABC7 in Los Angeles. She's a lover of food; she's interested in the food world because she grew up in it; she loves being in restaurants, whether they're mine or somebody else's. But she's not interested in being a professional cook or anything along the lines of what I do. She's a journalist.

I did a show with her where we sort of go around and we take each other to restaurants that we like. It's a very simple concept: Basically there's six episodes and we take six very obvious subjects—steak, burgers, tacos, fried chicken, lobster roll and pizza—and it all takes place in New York, where we grew up. I take her to places where I've been eating that particular dish basically for my whole life in New York, or for a long period of time, sort of like classic places that showcase that dish. Then she takes me to newer, hipper, very Instagrammable places where her generation [goes].

WS: You've worked all over the country, but you chose your hometown for this. What makes New York special, still?
BF: I think the best food in the world is in New York. I'm sure there are other cities in the world that would like to debate that, but I'm going to stay true to my city. It would be hard to lose that argument. We just have so many great chefs, so many great restaurants here, and I think that if I want to seek out some new cuisine or be inspired by a particular chef, I have tons of opportunities at my fingertips just getting on the subway. That's certainly an advantage, and it's a nice perk in my life.