”How should I store my cheese?” Over the course of more than a decade in the cheese industry, working at three of the most esteemed names in retail—Cowgirl Creamery Cheese Shop at the Ferry Building in San Francisco, Formaggio Kitchen in Cambridge, Mass., and Bedford Cheese Shop in New York—Jessica Sennett heard this seemingly never-ending refrain.

This year, her “wine cellar for cheese,” the Cheese Grotto, won the World Dairy Innovation Award for Best Equipment Innovation. The road from cheese wanderer to monger, maker and educator to inventor-entrepreneur has taken her from coast to coast and to Europe and back.

Sennett grew up in San Francisco, just across the Golden Gate Bridge from Marin County cheese country, but she wasn’t born into the cheese life. In the Bay Area's foodie culture, “The joke is that you’re eating sushi when you’re two years old,” she laughs, “and I always loved cheese, but I was never into it in any artisanal way.” But at age 19, Sennett decided to leave UCLA and figure out what she really wanted to do with her life.

In the meantime, she took a job working the cheese counter at Cowgirl. “I got exposure to hundreds of varieties and styles of cheese, and the world of specialty cheeses started to open up to me in a way that I had never experienced before … tasting the same cheese throughout the seasons and seeing the variations, and having that epiphany of terroir in relation to cheese in the similar way that there is to wine. That was very profound, as a sensory experience but also about a sense of place and learning about regions in Europe that have cultures focused on these foods. It kind of has that magical, mystical experience.”

From Cowgirl she headed to a chèvrerie in France’s Alsace region for a cheesemaking apprenticeship, then back to the West Coast to help manage the cheesemaking operation at Monteillet Fromagerie in Washington’s Walla Walla Valley for a year. She next joined Formaggio Kitchen, one of the biggest and best specialty cheese retailers on the East Coast, where she ended up focusing on a renovation of their subterranean cheese caves.

“That was the time period that really started the engine in terms of thinking about cheese care and how that translates to the customer experience,” Sennett says. “We did a lot of research into the optimal ways to keep cheese. It was a great foundation.”

Her cave renovation project complete, Sennett headed to New York, to tackle cheese education at Bedford Cheese Shop. “That was a place where I got a lot of interfacing with customers and their curiosity, and the question coming up over and over again of what was the best way to store the cheese that I’m buying,” Sennett says. “And that was fuel for me to ask, 'Is there a better way that people could be doing this?'”

At age 26, she decided to go back to school, receiving a fellowship to develop her own business. “I felt like I had some creative ideas that I hadn’t actualized yet. Eventually, one day in class, it struck a chord that [a home cellar for cheese] could be viable as a business.” 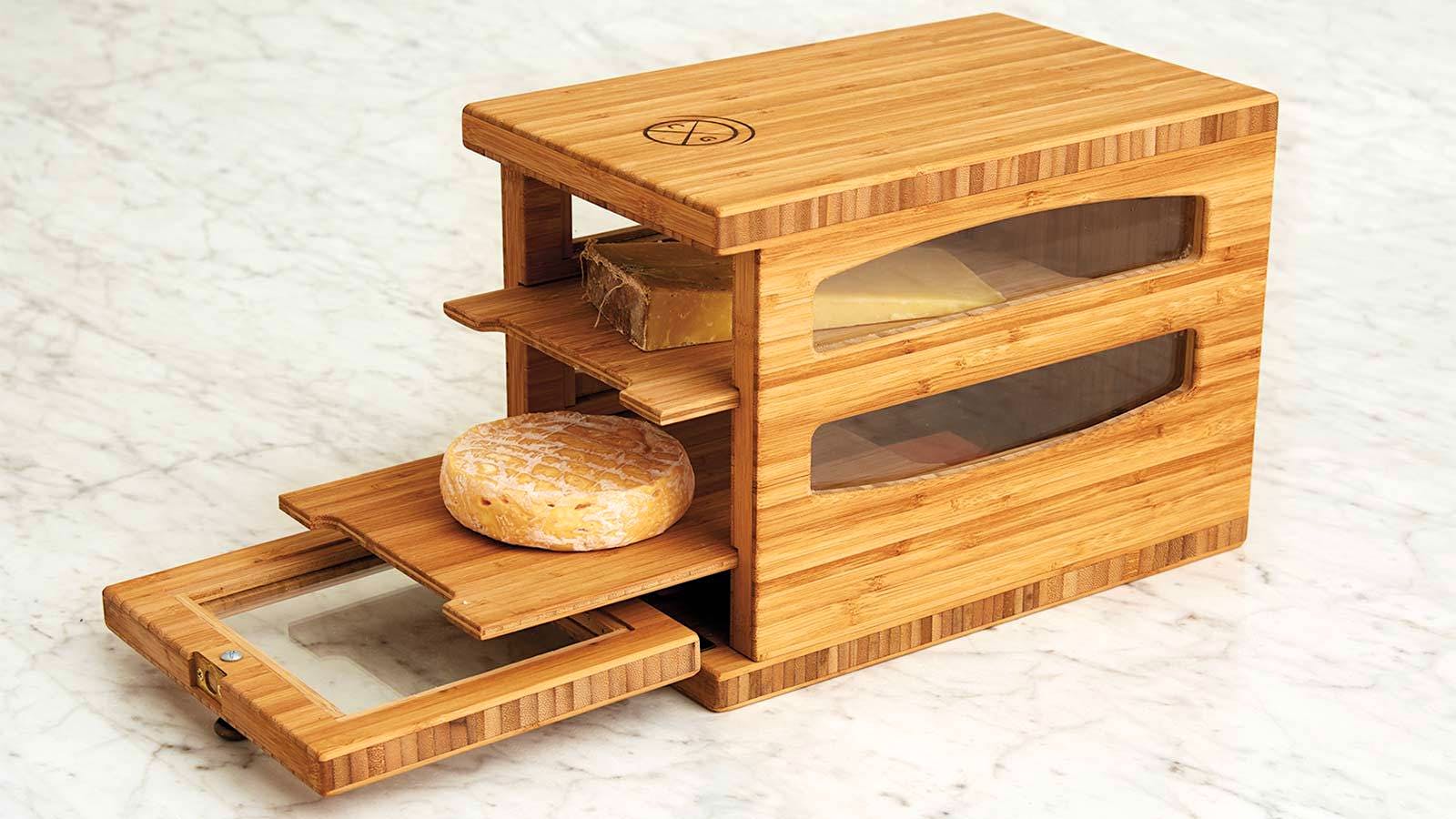 Months of drawings for prototypes followed. “It was a huge learning curve for me. My background was in selling cheese and not in manufacturing hardware … I had some pretty crazy drawings at the beginning,” she laughs. “I was rudely awakened to the fact that half of them would not make any sense … one had a multifaceted glass dome with breathability which would be really cool but also probably cost like $4,000!”

Expert fromager and author Max McCalman agreed to help test prototypes, and Sennett would give him four identical cheeses to store in her Cheese Grotto models vs. standard methods available to consumers, such as cheese paper, plastic bags and Tupperware. “We kind of hit it out of the park right away," she says. "The Grotto was able to extend cheese life past those other methods simply because it has humidity and breathability, and you don’t have to wrap the cheese.”

Today her Cheese Grotto line of cheese humidors ranges in price from $350 for the 10-pound capacity Classico to $85 for the 1-pound capacity Piatto. (Learn more about them in our 2019 holiday gift guide.) She has also started a cheese subscription service featuring award-winning, nationally recognized stars like Vermont’s Jasper Hill and Wisconsin’s Uplands Cheese Co., as well as small-production, off-the-radar cheeses like New York’s Miracle Springs Farm and Minnesota’s Redhead Creamery. 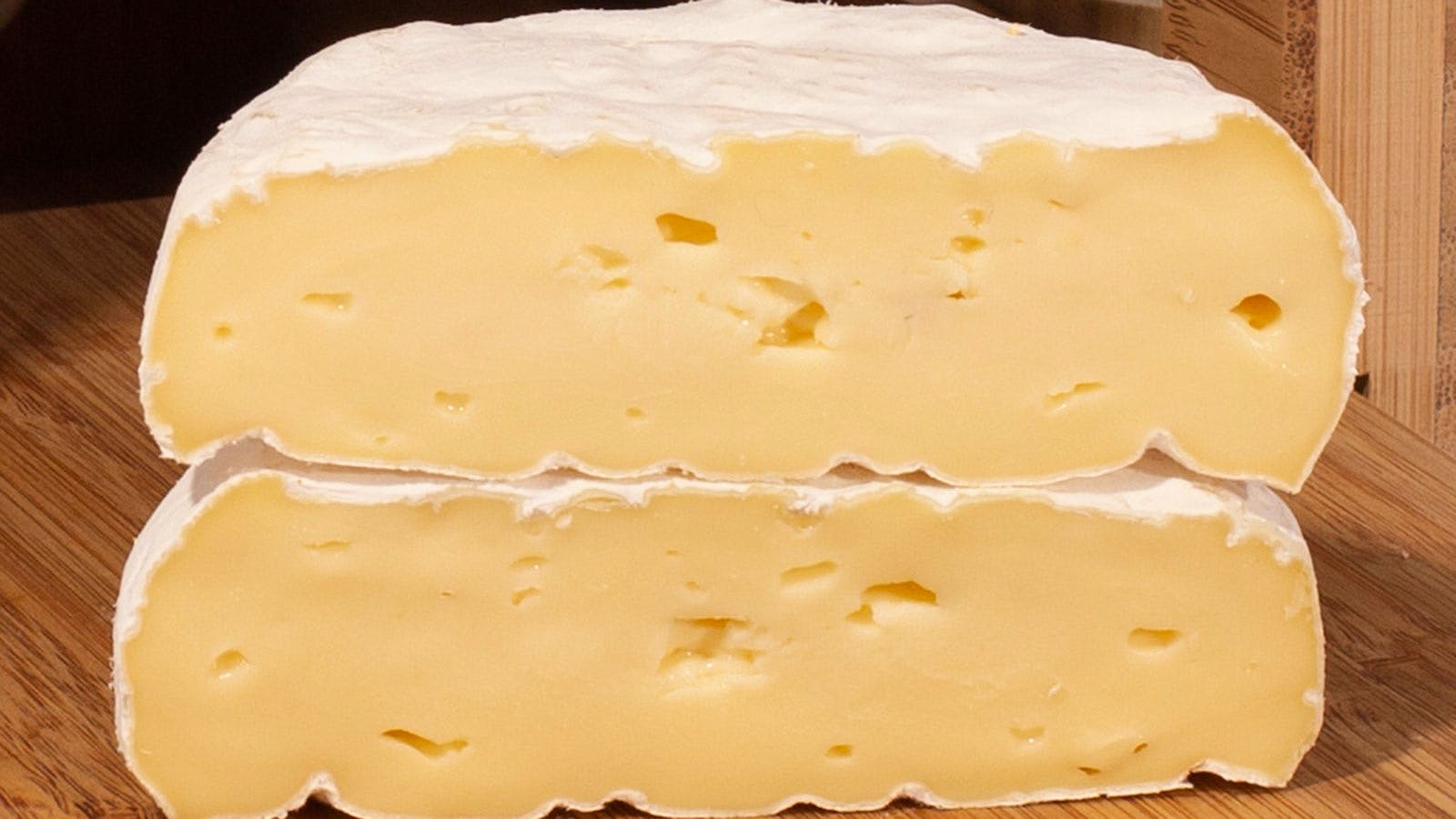 Sennett says: My Artisano, which is an urban creamery using all grass-fed milk, was awarded a World Cheese Award bronze medal this year for its extremely well-balanced pasteurized Sharon Creek Brie. This is a crowd-pleaser for the whole family—buttery, grassy, well-salted, with a white button mushroom flavor closer to the rind. My recommendation is to allow this cheese to rest at room temperature for anywhere from 1 to 12 hours and it will become richer in flavor and mouthfeel, with the lactic, buttery notes coming to the forefront.

Sennett’s recommended pairing: The rich butterfat in this cheese makes it perfect for a holiday pairing with a traditional-method sparkling wine made from Chardonnay and/or Pinot Noir grapes. Something dry but fruit-forward (think stone fruits) would do well here. 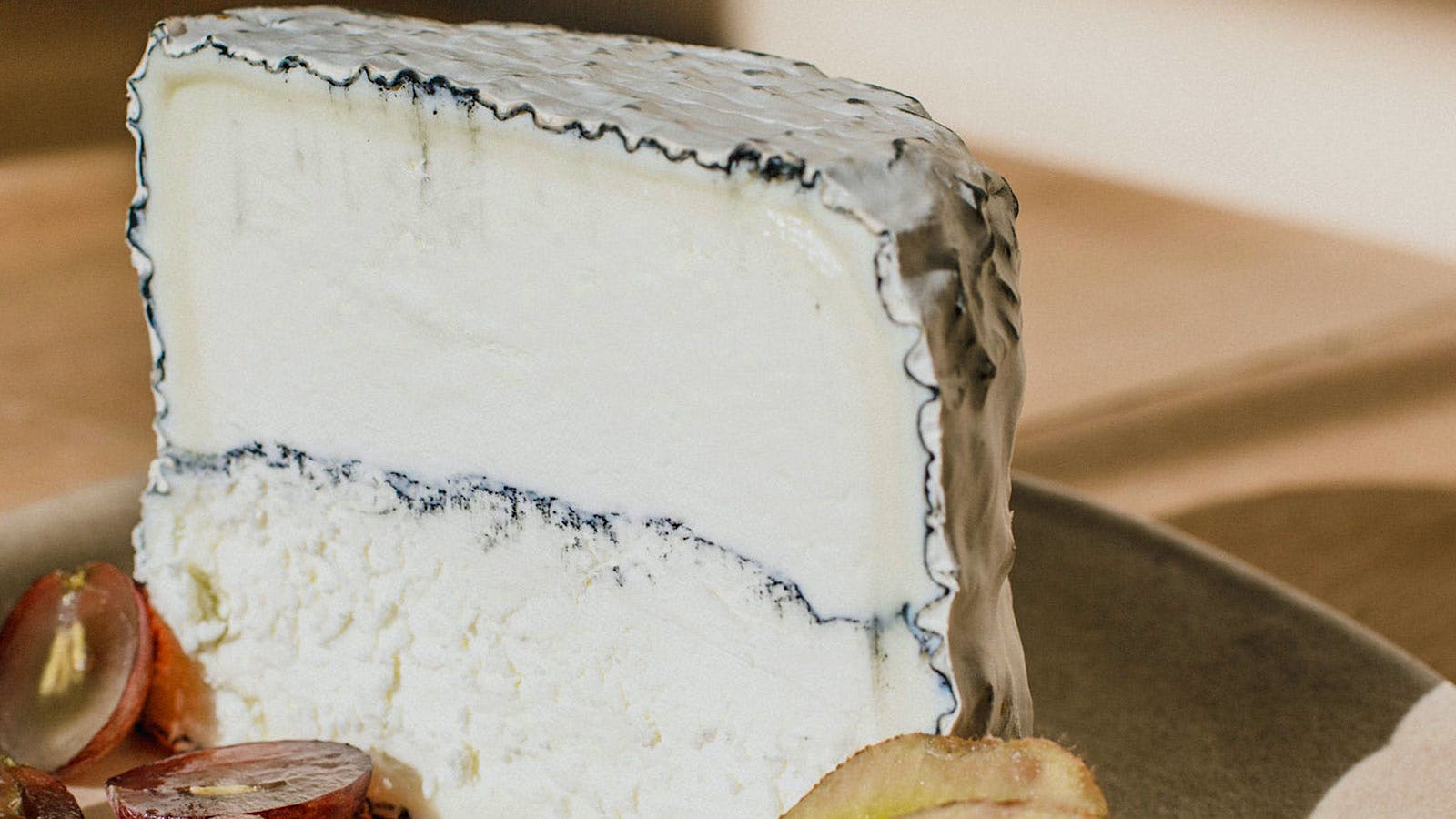 Sennett says: For a New York interpretation of California's Humboldt Fog, try this sustainably made goat cheese. Signal Rock is light, bright and citrusy, with a fresh minerality to it, and it looks stunning on a cheese plate paired with candied citrus and fresh fruits.

Sennett’s recommended pairing: Look for a Pinot Grigio that mirrors the lemony flavors of the cheese.

Wine Spectator picks: For another bright and citrusy pairing, turn to Sauvignon Blanc, a classic with goat cheeses, in its range of expressions from around the world. From California, the intense and vibrant Honig Sauvignon Blanc Napa Valley 2018 (91, $19, 49,820 cases made) offers succulent nectarine flavors; from New Zealand, Kim Crawford Sauvignon Blanc Marlborough 2018 (90, $18, 1,700,000 cases made) is bright and expressive with a core of citrus, apricot and melon flavors; and from France, Patient Cottat Sancerre Anciennes Vignes 2018 (89, $28, 10,000 cases imported) has a lively edge with gooseberry and tangerine notes. 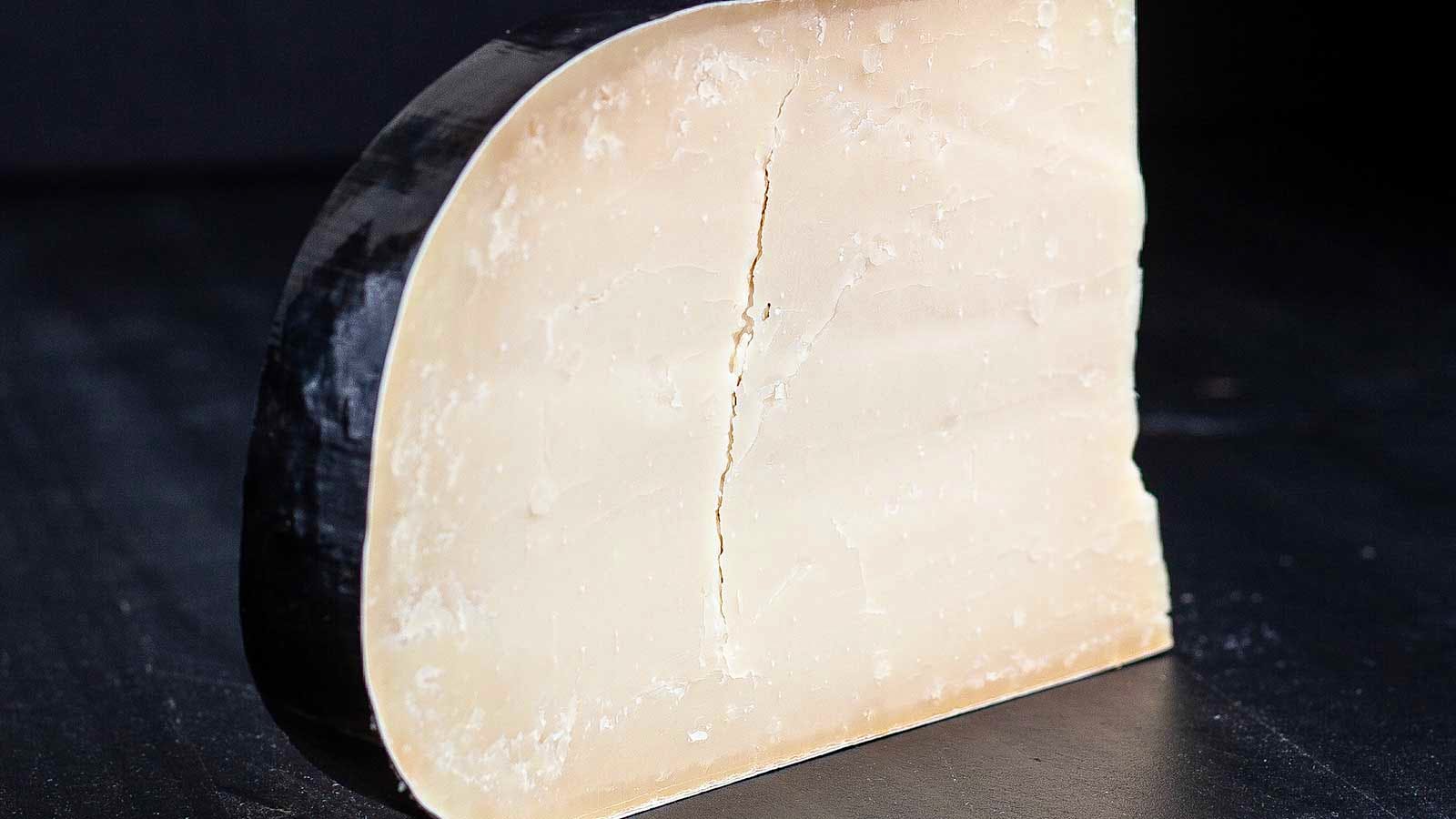 Sennett says: This is a seasonal darling of the specialty cheese world that makes its appearance during the winter months on cheese counters across America. It is an extra-aged version of the younger Gouda, Brabander. Studded with crunchy tyrosine crystals and cloaked in black wax, it’s sweet and savory at once. Flavor notes of butterscotch and salty pecans abound.

Sennett’s recommended pairing: For another great holiday-season match, look to Spain for a rich, creamy or nutty Cava to serve with Black Betty. Or, for an indulgent nightcap, try this with a rye whiskey whose full-bodied, earthy and spicy characteristics balance perfectly with this big-flavored Gouda.