Hundreds of Wine Spectator Restaurant Award winners offer top wine experiences in casinos across the globe, including these 14 restaurants. For more world-class casino dining, check out Las Vegas' five Grand Award winners in our guide to the 5 Best Wine Lists on the Strip. 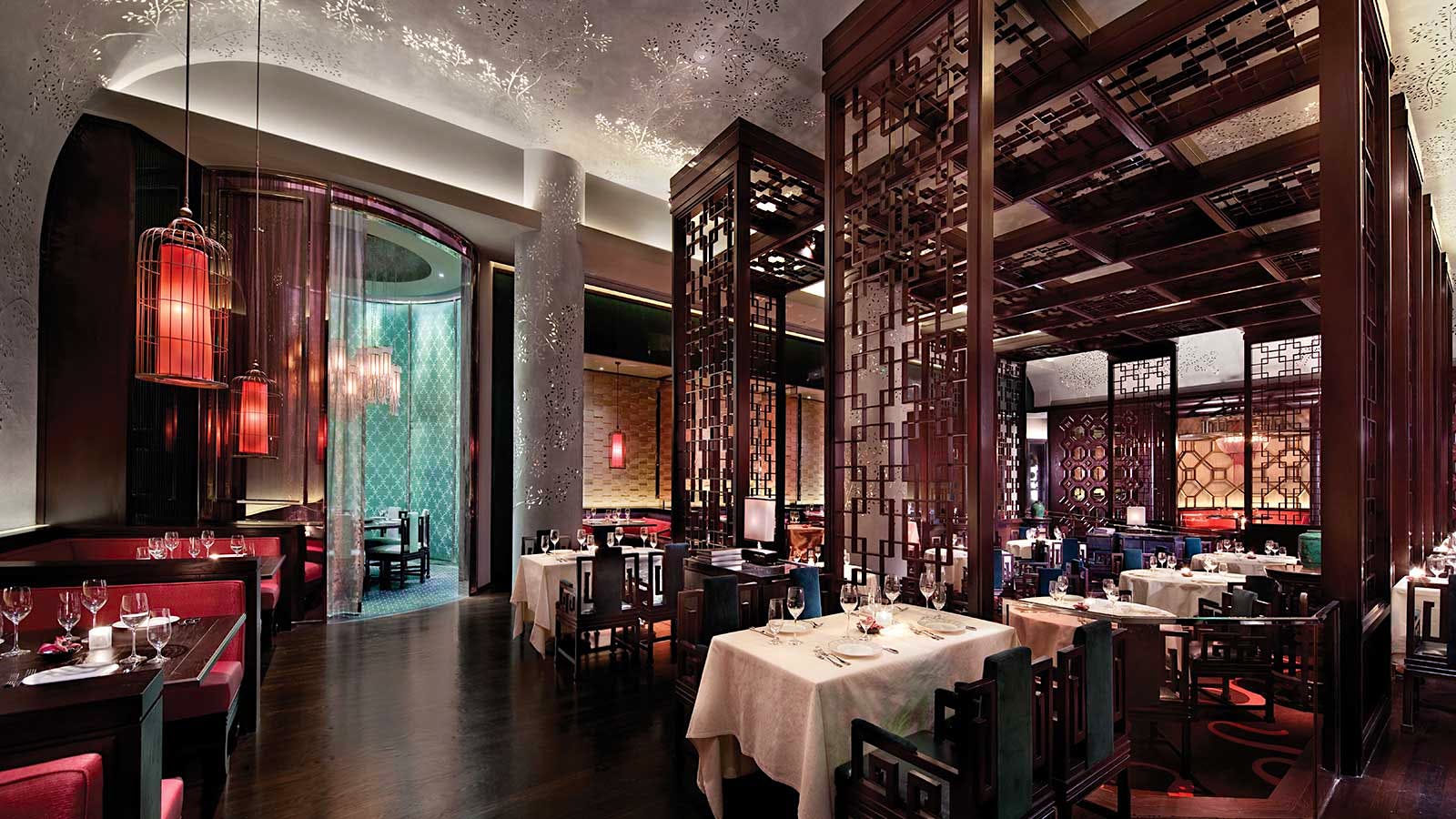 With eight Restaurant Award winners, Aria Resort and Casino is an ultimate wine lover’s destination in Vegas. Blossom, which has held its award since 2011, features a Hong Kong–born chef serving authentic Cantonese cuisine and a global wine program. France stands out among the 545 selections, with lengthy verticals from top producers going back to the early 1980s. There are also strong selections from California, with favorite names like Opus One and Screaming Eagle. Nearly 30 wines are available in half-bottles, primarily from France and California. The program is overseen by William Moss, wine director for Aria Resort and Casino. 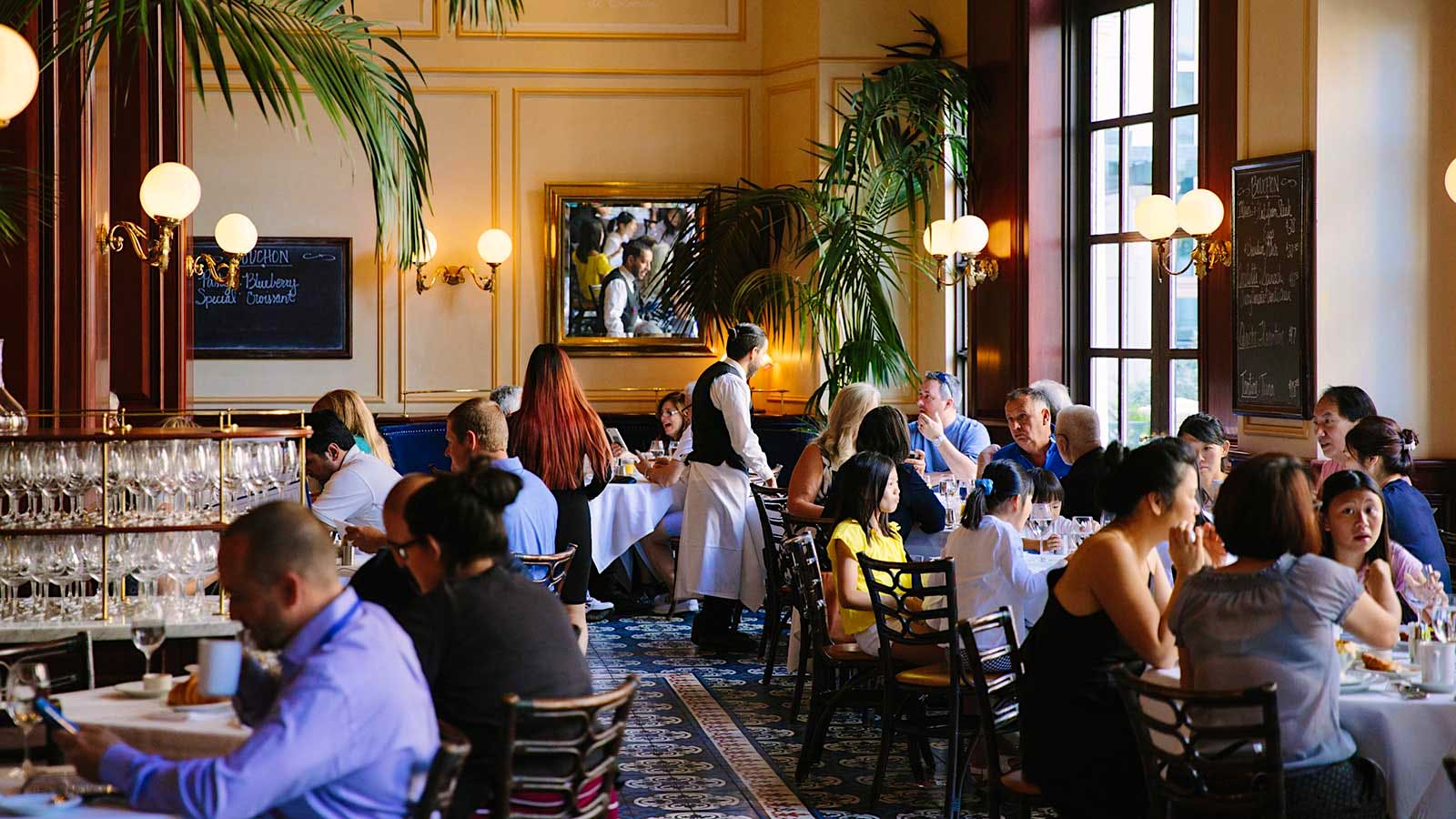 David Escalante
Thomas Keller showcases his French cuisine at Bouchon in the Venetian.

Bouchon is a fine-dining concept from famed chef and restaurateur Thomas Keller in the Venetian. Under the direction of wine director Eric Prato, the Best of Award of Excellence–winning list is part French and part domestic, with strengths in California and Burgundy. There are nearly 30 wines available by the glass and values from superstar producers like the Languedoc's Gérard Bertrand. Pair one of the 480 selections with chef Joshua Crain’s French bistro fare and a raw bar of oysters, caviar, lobster and more. In addition to Bouchon, Keller owns Grand Award winner Per Se and the French Laundry, as well as Best of Award of Excellence winners Bouchon in Napa Valley and the Surf Club Restaurant.

Connecticut is home to 19 casinos including the Foxwoods Resort Casino, where David Burke Prime Steakhouse features classic American cuisine and a Best of Award of Excellence–winning wine program. Chef Pedro Avila’s extensive steak selection is matched with a list focusing on California bottles with additional strengths in Italy, Bordeaux and Burgundy. A two-story glass wine tower holds many of the restaurant’s 5,700 bottles supplying the 850-selection list compiled by wine director Ryan Robinson. Many options hover around the $100 to $200 range, but splurges are available, especially from French producers such as Château Latour and Domaine de la Romanée-Conti. 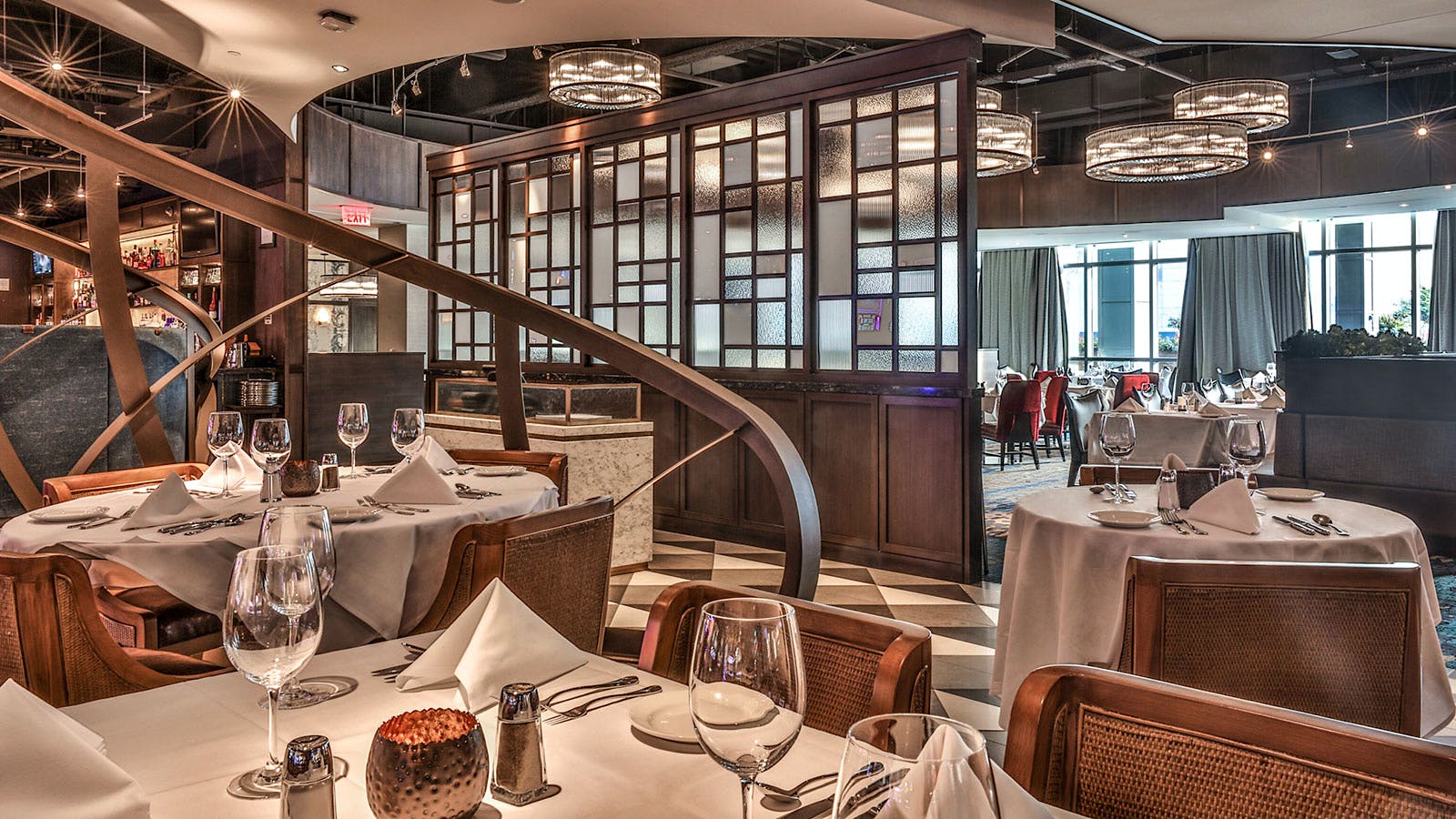 Known for its rich industrial history, Bethlehem has grown into a casino hotspot. Sands Casino Resort Bethlehem is home to Emeril’s Chop House, one of several Southern-influenced steak houses owned by chef Emeril Lagasse. General manager Jason Lonigro selects the 825 wines on the list, highlighting bottles from California, France and Italy that pair with chef Tyler Baxter’s bold fare. Prices span from a broad selection of bottles under $50 to domestic gems like a vertical of Harlan Estate Napa Valley. There are also nearly 40 wines by the glass, most of which are under $20. 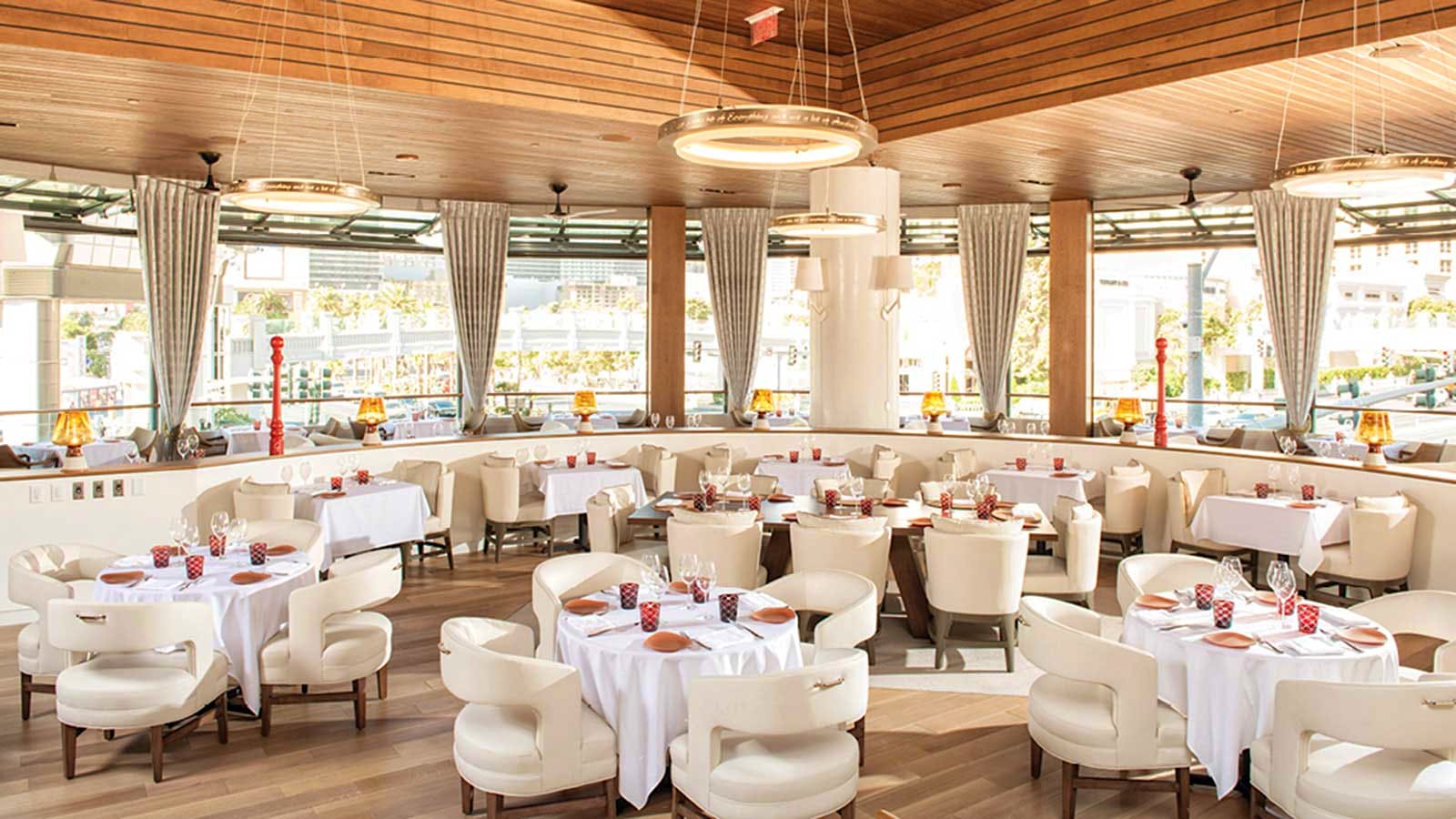 Celebrity chef Giada De Laurentiis is known for bringing a fresh, California flair to authentic Italian cuisine. In the Cromwell Hotel, she showcases her signature style with a self-titled restaurant that’s earned a Best of Award of Excellence four years in a row. Head sommelier James Bremner manages Giada’s 450 selections covering a wide range of budgets and tastes. The list is strongest in Italy, France and California, and “Giada’s private reserve cellar” features her favorite Napa Valley bottles from top producers like Harlan Estate and Opus One. Chef Michael Gill executes De Laurentiis’ menu of Italian dishes such as cacio e pepe bucatini, ravioli with Brussels sprouts and brown butter, and risotto with crab and scallops. 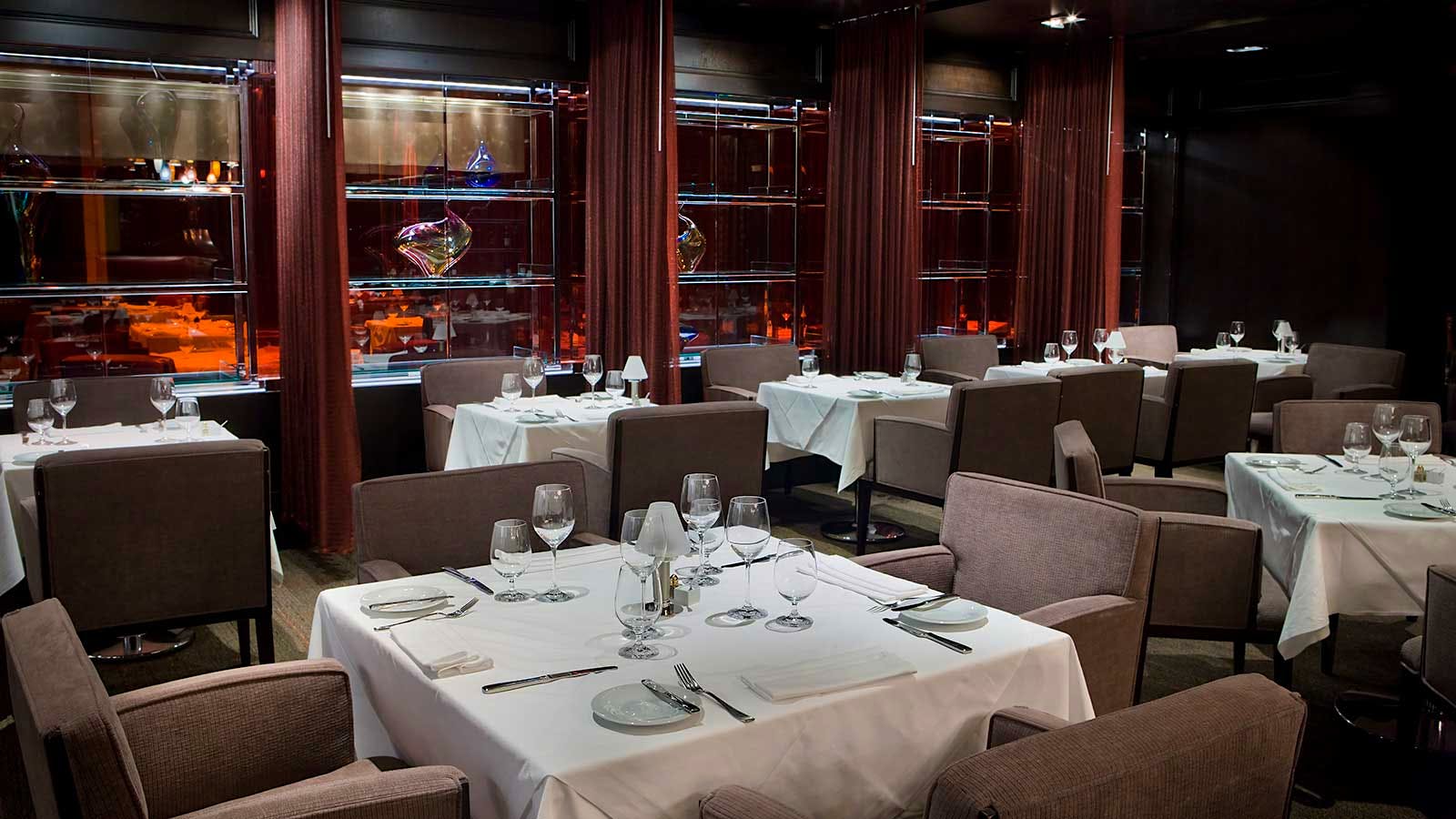 Niagara Fallsview Casino Resort features two Best of Award of Excellence–winning restaurants under food and beverage director Mario Prudente: 21 Club steak house and Ponte Vecchio. Taking its name from a historic bridge in Florence, Italy, the restaurant specializes in traditional Italian plates with a touch of global influence. Chef Jay Sek serves entrées like Chilean sea bass with eggplant purée and marinated boneless Cornish hen, and an assortment of house-made pastas. The 700 wine selections offer plenty of big, California reds to pair with the hearty dishes, plus aged Italian bottles going back to the mid-1990s. The list is also strong in France and Canada, with nearly 100 local wines all under $150. 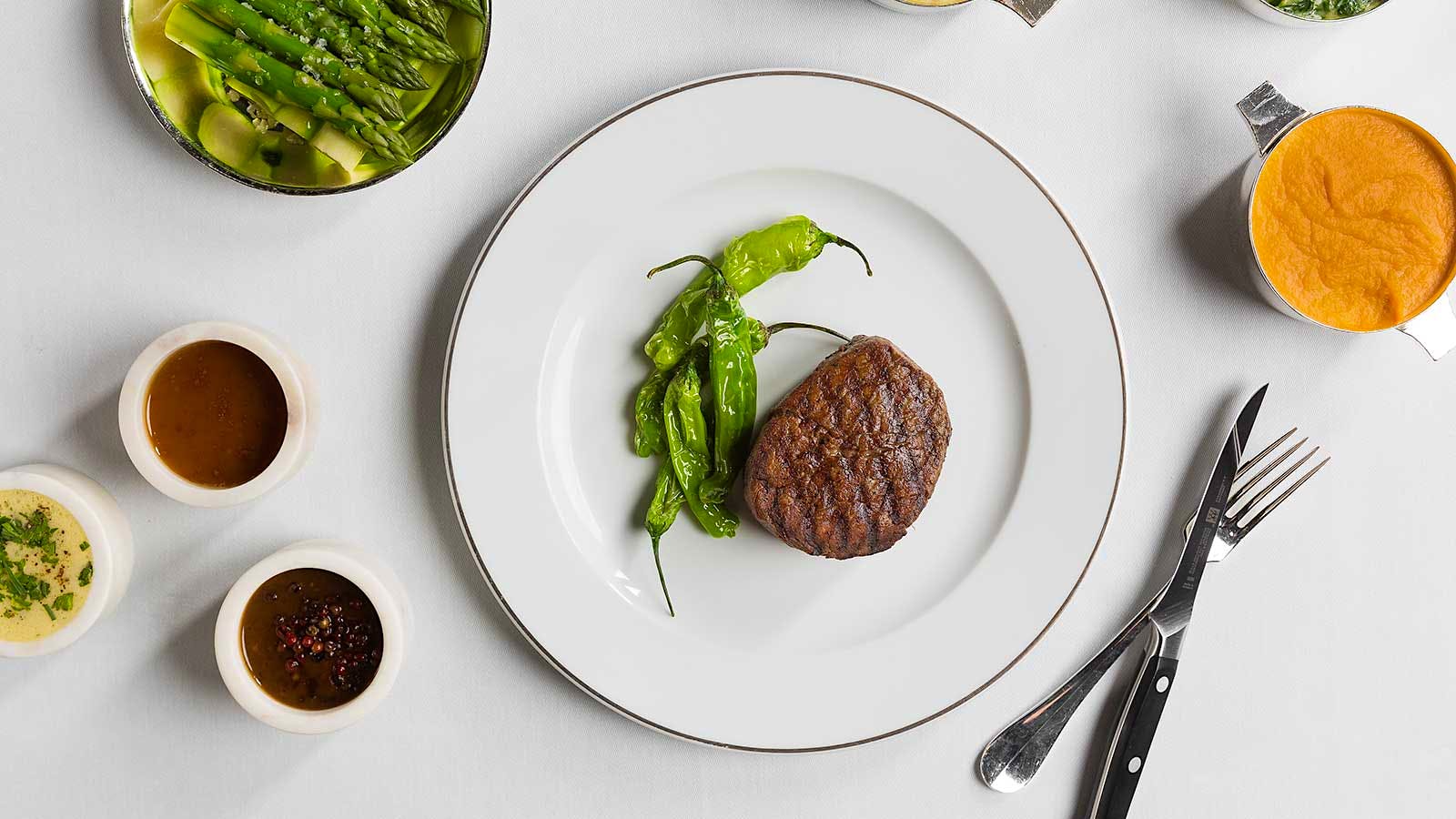 The Bellagio hotel is one of the Las Vegas Strip's beacons of luxury. The sprawling property features a golf course, spa, casino and an impressive eight Restaurant Award winners, including Grand Award winner Picasso. Wine director Jason Smith oversees the programs, most of which have held their titles for more than a decade. Jean-Georges Vongerichten’s Prime Steakhouse boasts 745 selections. Smith brings a mix of classic and New World styles to the program, highlighting California while offering a strong selection of wines from Burgundy and Italy. In the kitchen, chef Rob Moore showcases ingredients like Kobe beef and cold-water lobster tail. 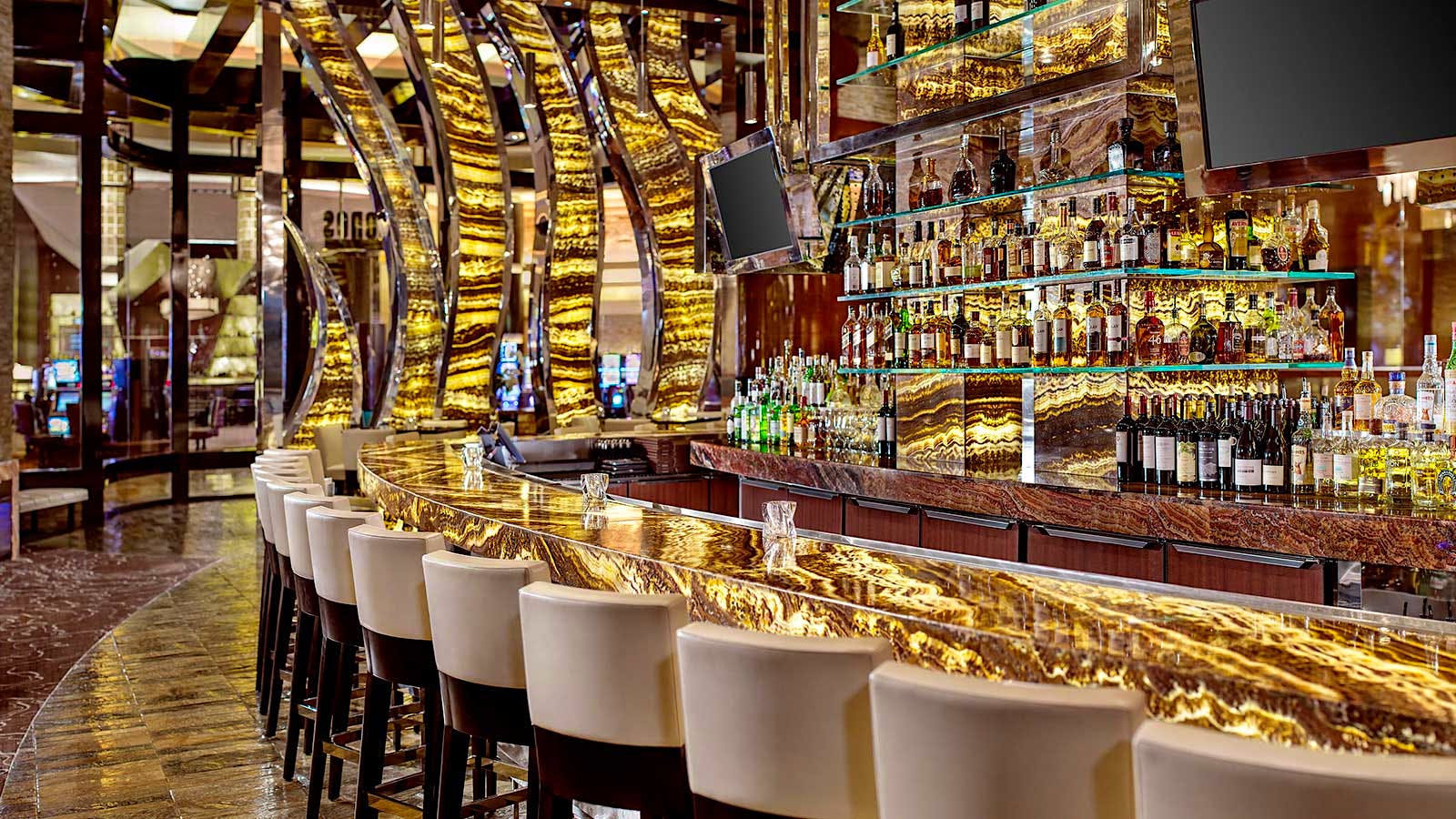 On the outskirts of Las Vegas, Red Rock Casino, Resort and Spa offers its own array of attractions including multiple nightlife venues and a Best of Award of Excellence–winning wine program. The resort’s steak house, T-Bones Chophouse & Lounge, has held a Restaurant Award since 2008. Chef Mike Deas’ steak-house cuisine complements a primarily red list of 750 selections chosen by corporate wine director Melissa Branco. The program is strongest in California, France and Italy, featuring five pages of Napa Cabernets. Two dozen wines are available by the glass, including a few "sommelier selections.” 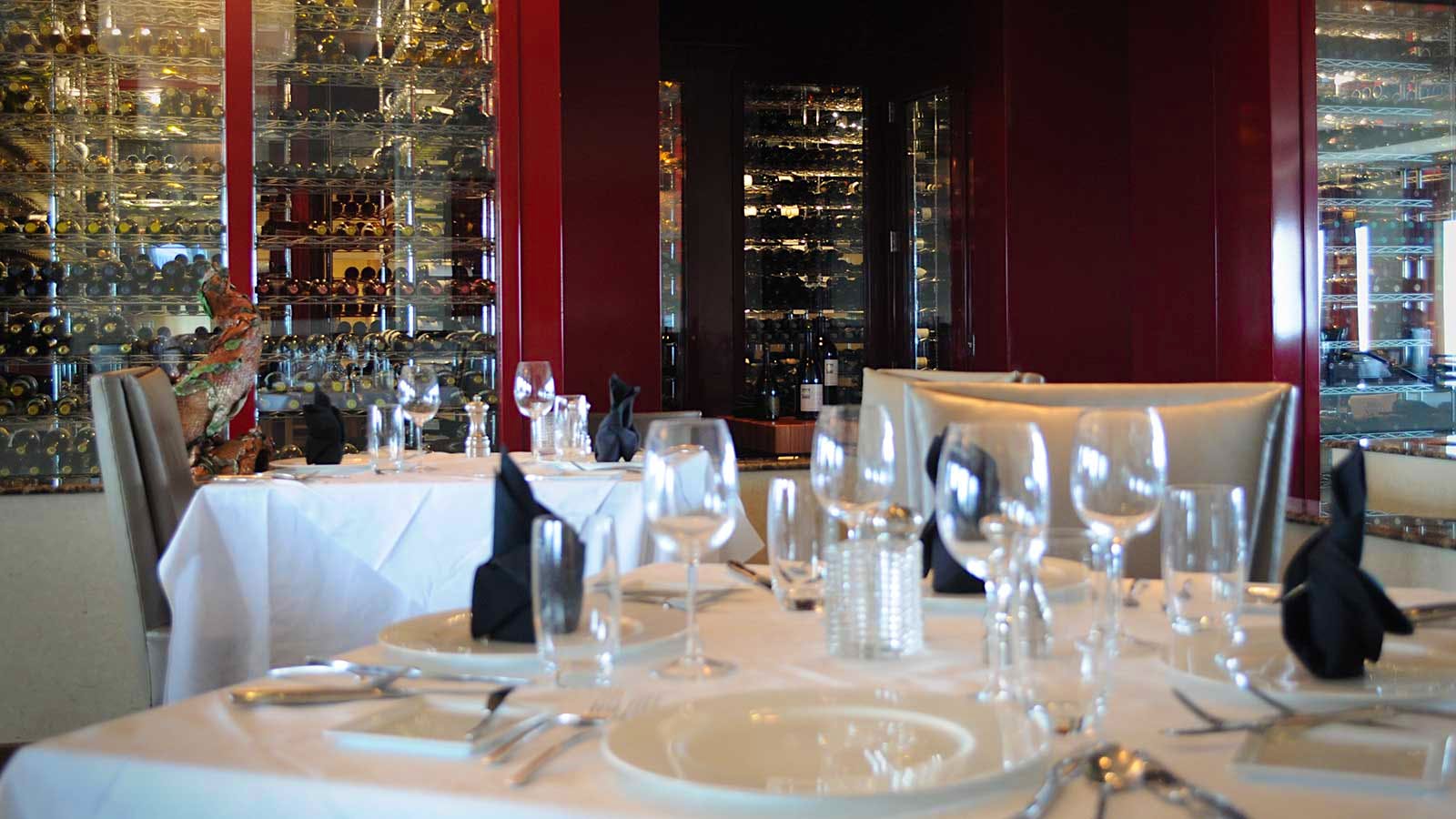 A few hours' drive around the Gulf Coast from New Orleans is the small town of Biloxi, Miss., where casinos include big names like Hard Rock and Golden Nugget, plus local brands like IP Casino Resort & Spa. IP's Thirty-Two serves high-end steak and seafood fare with a Best of Award of Excellence–winning wine program. Food and beverage assistant director John Gaulke manages the list of 740 selections with highlights in California, France, Italy, Washington and Oregon. Germany is another strength on the list, including a hefty vertical of Joh. Jos. Prüm Riesling Auslese Wehlener Sonnenuhr. Chef Matthew Kallinikos offers American staples like dry-aged steaks and local seafood, as well as a full vegetarian menu with creative options like seared tofu “scallops” and button mushrooms braised “escargot style.” 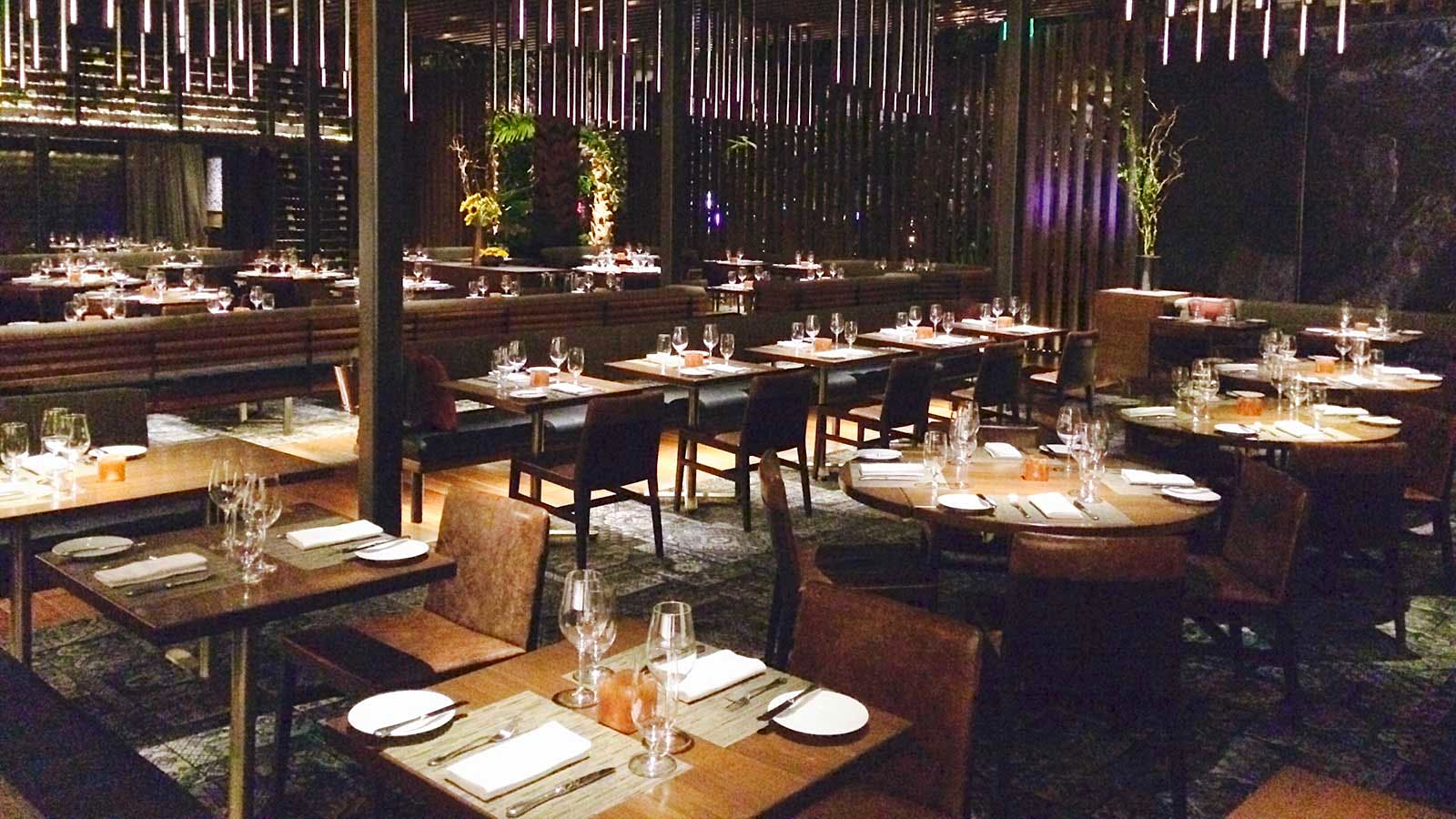 In Las Vegas’ renowned Mirage Hotel, Tom Colicchio’s Heritage Steak has held a Best of Award of Excellence since 2014. Wine director Robert Conlon built the list of 380 bottles with strengths in California, Burgundy, Bordeaux and Italy. While there are plenty of gems from top Bordeaux producers going back to the 1960s, Conlon also offers values from several domestic regions. The list is made to pair with the charred, smoky flavors of chef Matt Chacho’s menu. Chacho dresses up steak-house staples in entrées like bone-in short rib with ramp and horseradish, and sides like spicy onion rings and truffle risotto. 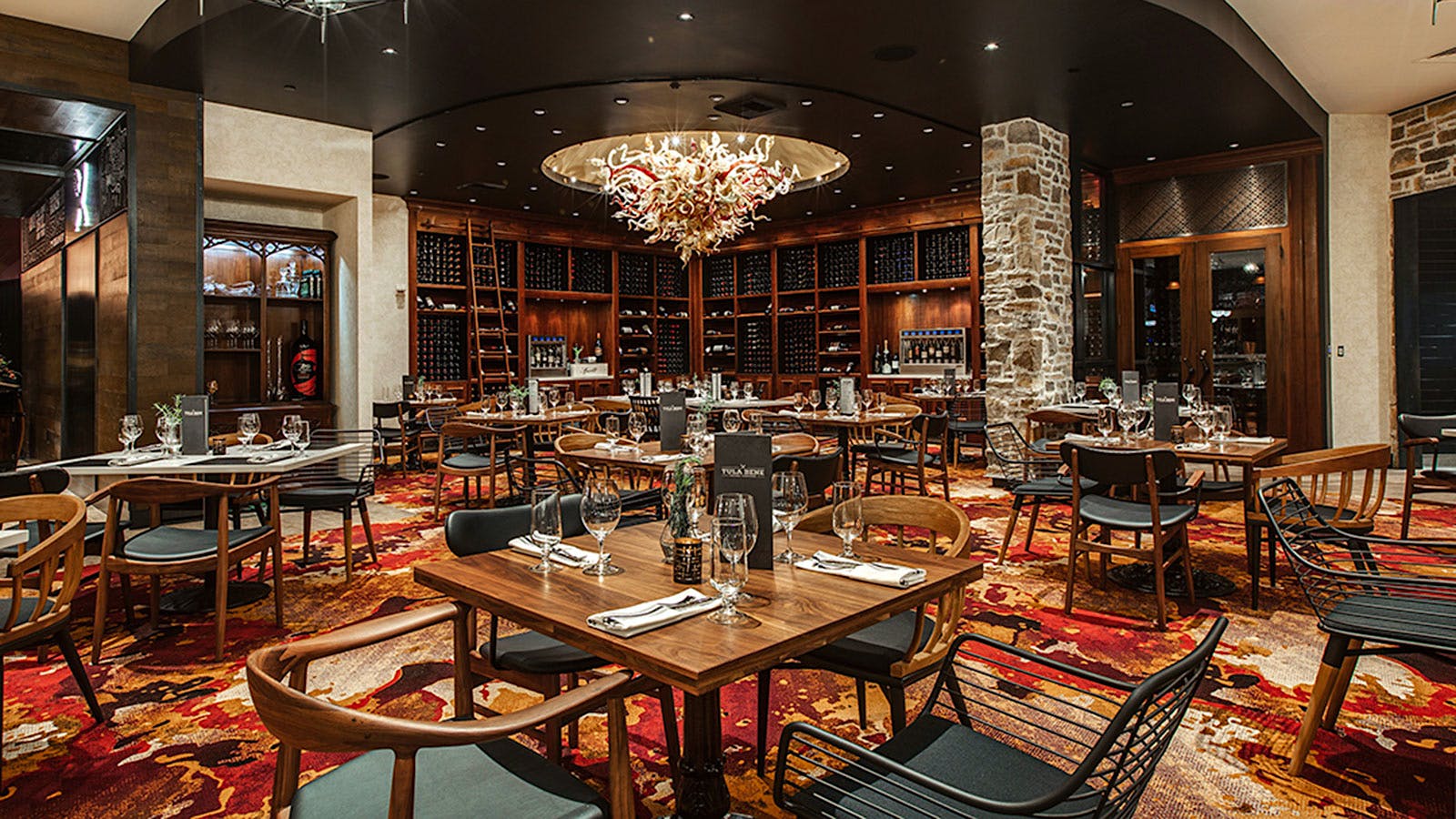 About a 45-minute drive from downtown Seattle, Tulalip Resort Casino is home to two Best of Award of Excellence winners: Tula Bene Pastaria + Chophouse and Blackfish Wild Salmon Grill & Bar. Wine director Tommy Thompson manages both programs, and at Tula Bene, he offers 375 selections to pair with chef Jeremy Taisey’s Northern Italian–meets steak-house menu. The list balances a variety of international regions, from Germany to Austria to the Canary Islands, while excelling in Washington, Italy and France. There’s a substantial by-the-glass program of more than 40 picks, most of which are available in multiple sizes of pours, including a few via Coravin. 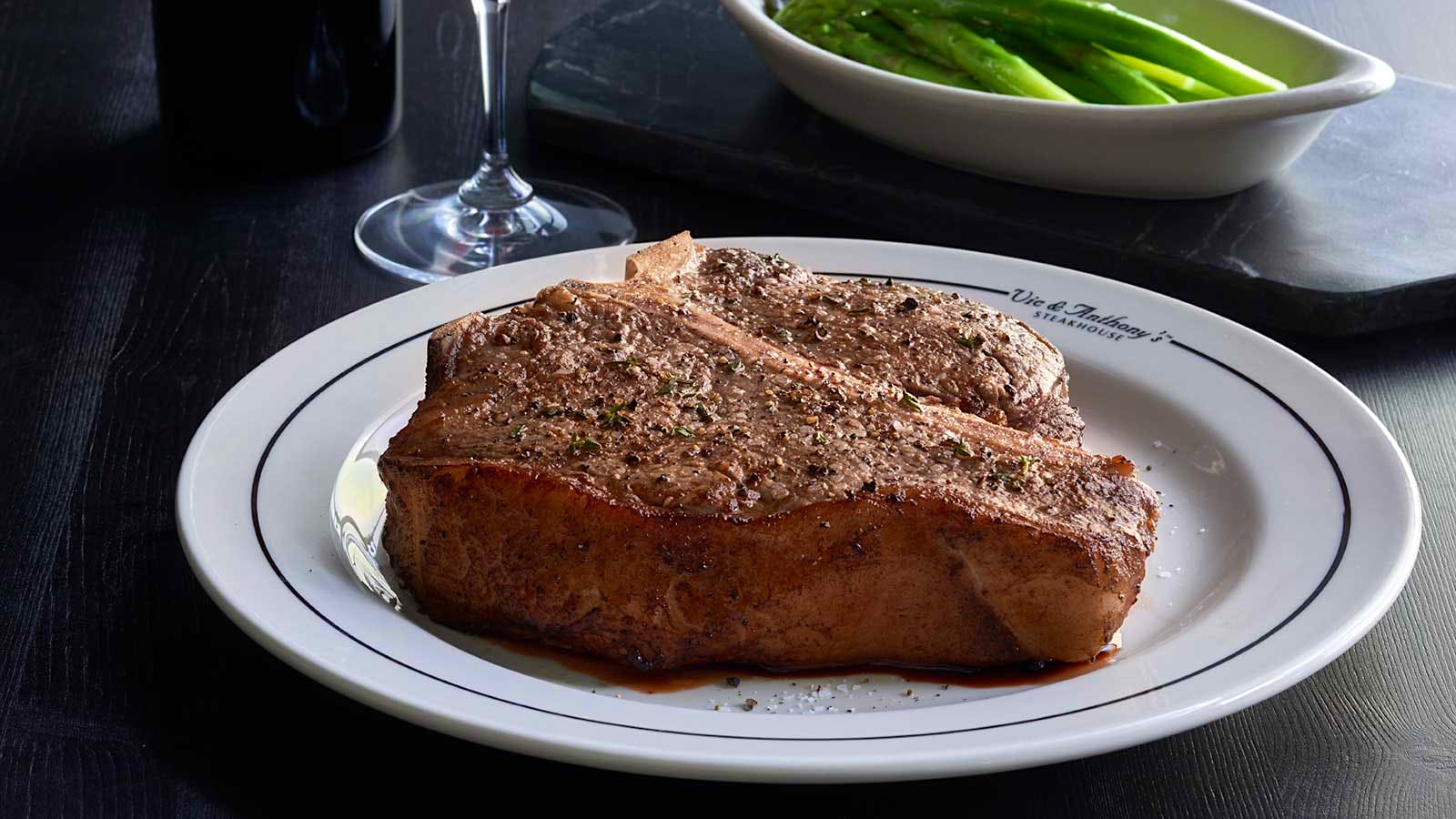 With glass-paneled shelves exposing some of the more than 3,600-bottle inventory, it’s clear that wine is a centerpiece of the experience at Vic & Anthony’s in Atlantic City. All four locations are Restaurant Award winners, and the chain is part of the Landry’s restaurant group, which has nearly 150 Restaurant Award winners around the world. The Atlantic City outpost holds a Best of Award of Excellence for its program managed by wine director and general manager Victor Alegria. Wine list highlights include California, France and Italy. There is also a variety of large and small bottle formats, as well as more than two dozen wines by the glass, including a “sommelier selection.” Crafted by chef James Kreiss, traditional steak house fare is served alongside globally influenced dishes like Szechuan pepper–crusted tuna and mushroom gnocchi. 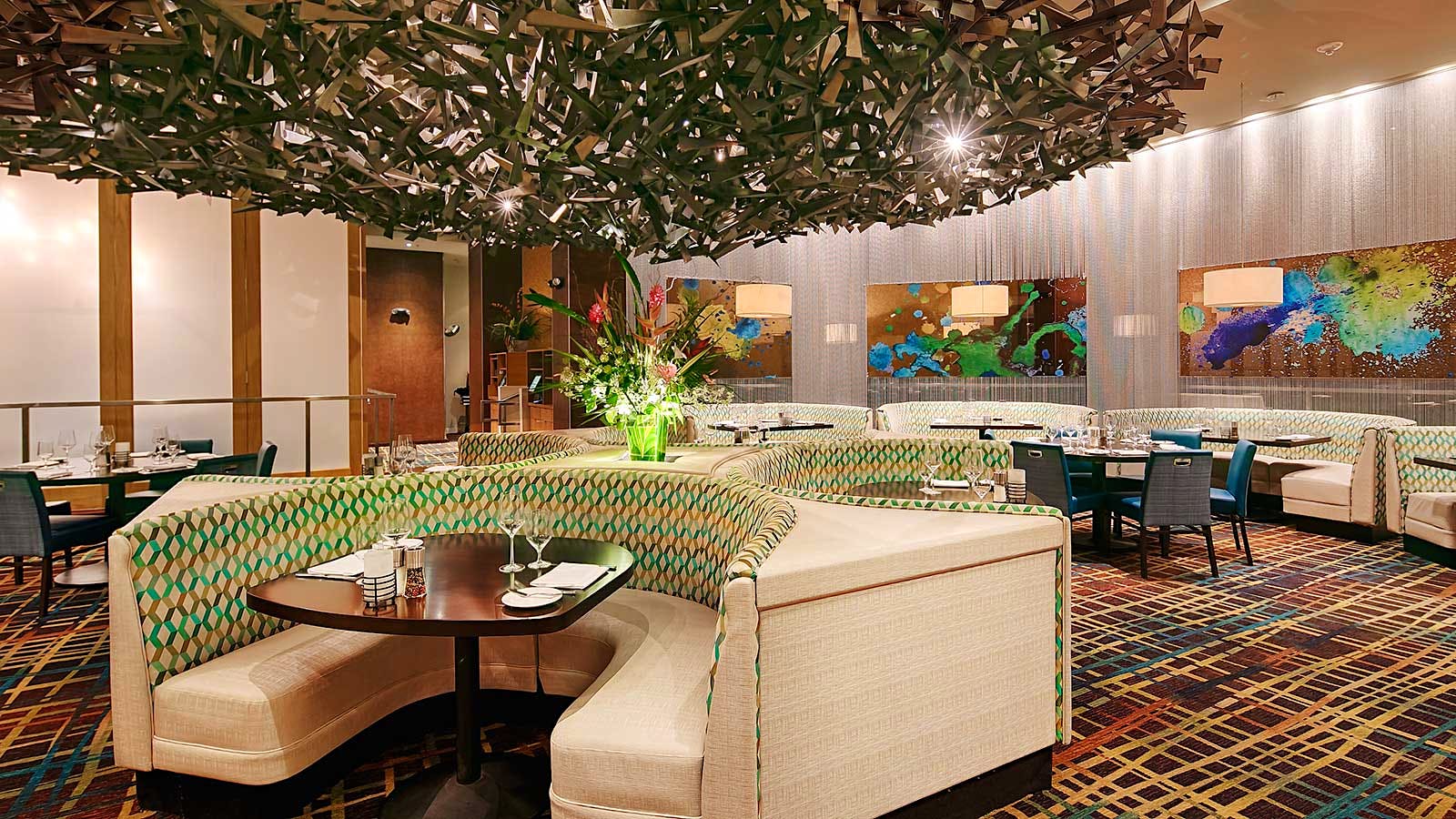 Charlie Palmer Steak has five Restaurant Award–winning locations across the country. In Reno, Nev.’s Grand Sierra Resort & Casino, Charlie Palmer Steak has held an Award of Excellence since 2014. Wine director Lilia Suter lists mostly California and French bottles among the 365 selections, with nearly 50 available by the glass. A majority of the list is under $100, but prized producers such as M. Chapoutier and Shafer are still represented. Chef Michael Mahoney’s steaks range from filet mignon to a tomahawk rib eye for two, accompanied by classic sides like creamed spinach and potato gratin. 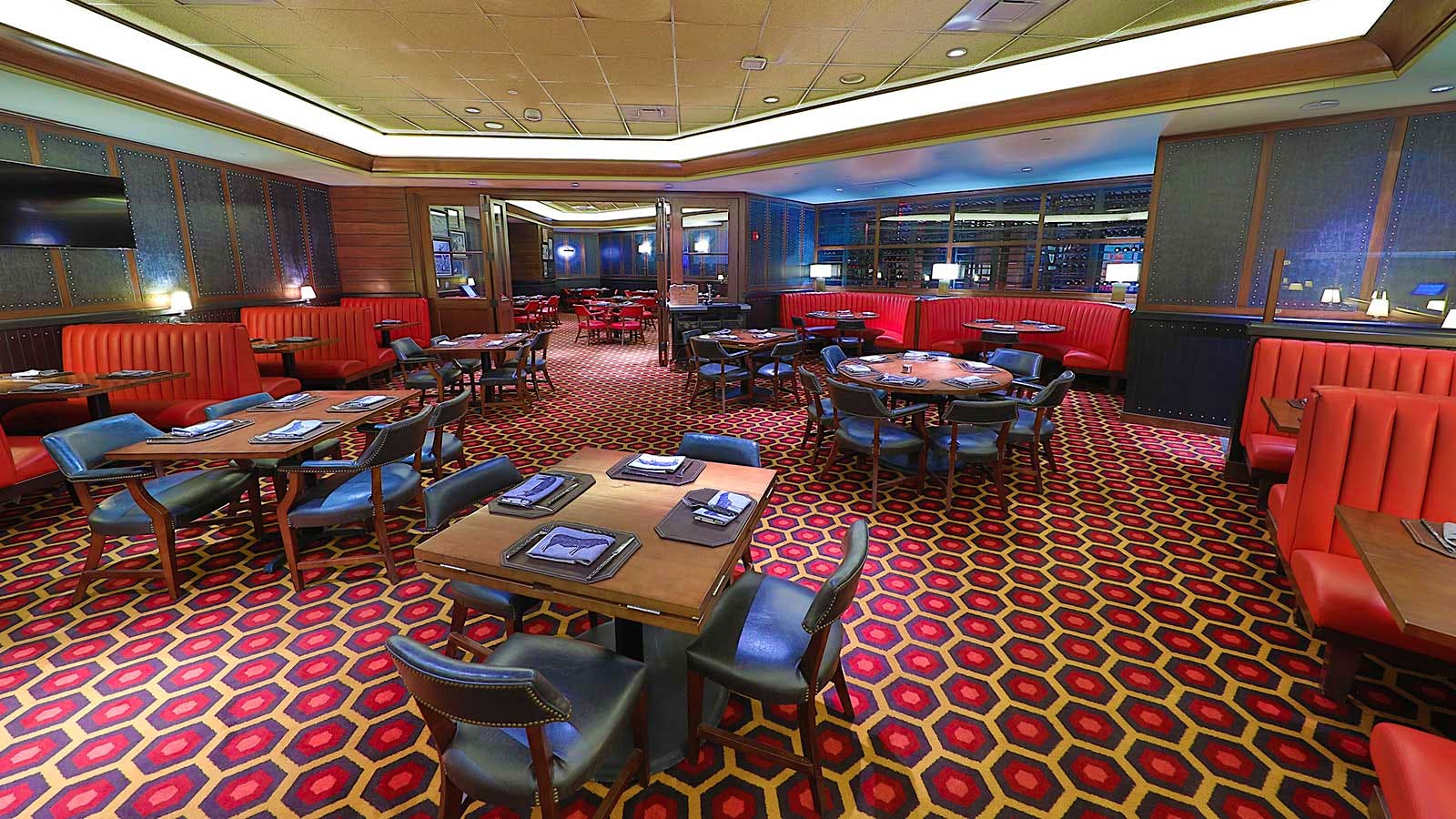 On the Atlantic City Boardwalk, Guy Fieri's Chophouse holds an Award of Excellence for its 90-selection list strongest in California. Nearly all bottles are under $100, with the exception of “Guy’s Stellar Cellar,” a reserve list based on the celebrity chef’s favorites, with pricier options from Moët & Chandon, Silver Oak and more. Chef Giancarlo Generosi presents Fieri’s signature bold fare with playful dishes like a bacon mac‘n'cheese burger, plus plenty of wood-grilled steaks and chops.