Shizuku Kanzaki is summoned home one day to discover that his estranged father, a famous wine critic with a cellar that's the stuff of legend, has died. But he soon finds that claiming his inheritance will not be so simple as signing on a line: His father has devised an elaborate game in which he must identify and describe 13 top wines around the world—against a competitor, a brash young wine virtuoso the elder Kanzaki adopted. Shizuku works at a beer company.

So begins the 44-volume saga Kami no Shizuku, written by sister-brother team Yuko and Shin Kibayashi (under the nom de plume Tadashi Agi) and illustrated by Shu Okimoto, the unexpected smash-hit manga series that enraptured Japanese readers for its 10-year run, from 2004 to 2014. Today, Kodansha Comics and Amazon digital comics platform ComiXology have announced that a full English translation is coming, under the title The Drops of God, with a re-edited translation of the first eight volumes plus three previously untranslated ones just released.

Graphic novels are growing in popularity, and "we're also riding a crest in gourmet food publishing," explained Kodansha USA CEO Alvin Lu to Unfiltered. "So the timing was definitely right to reintroduce it and release it in full at this moment."

Exclusive newly translated excerpt from The Drops of God, Vol. 1, © Tadashi Agi and Shu Okimoto (2019), ComiXology and Kodansha Comics. Panels on each page should be read from right to left. 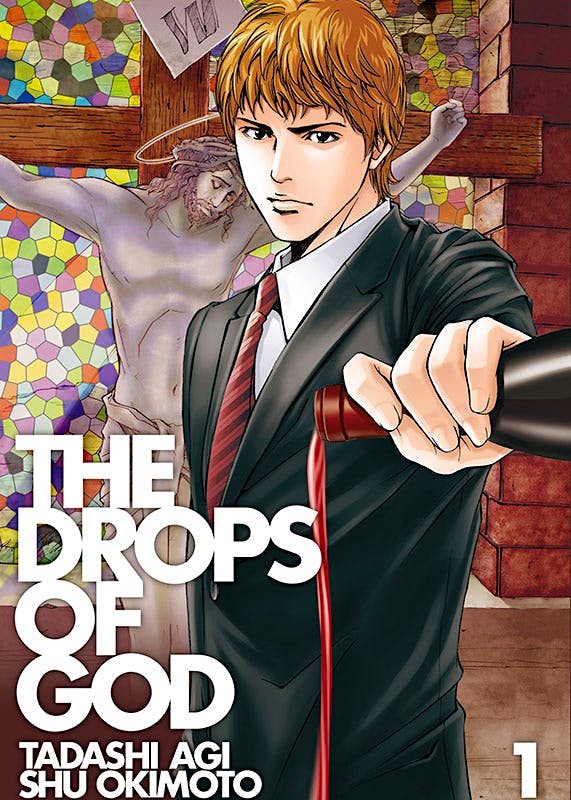 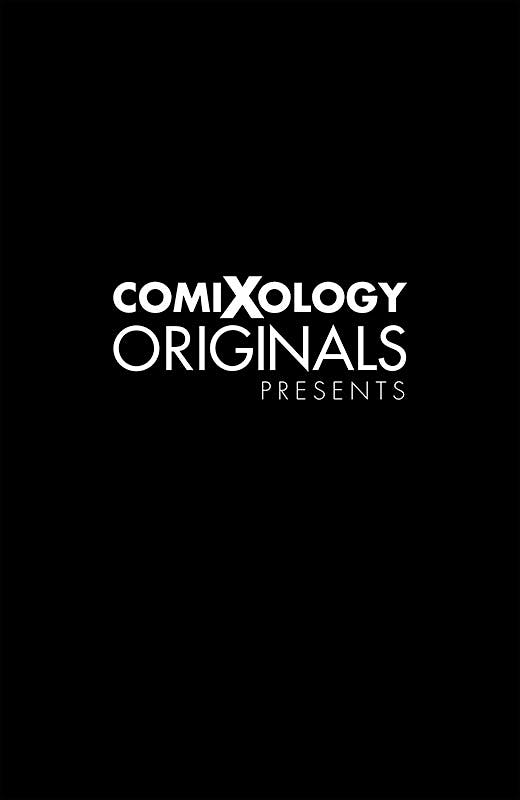 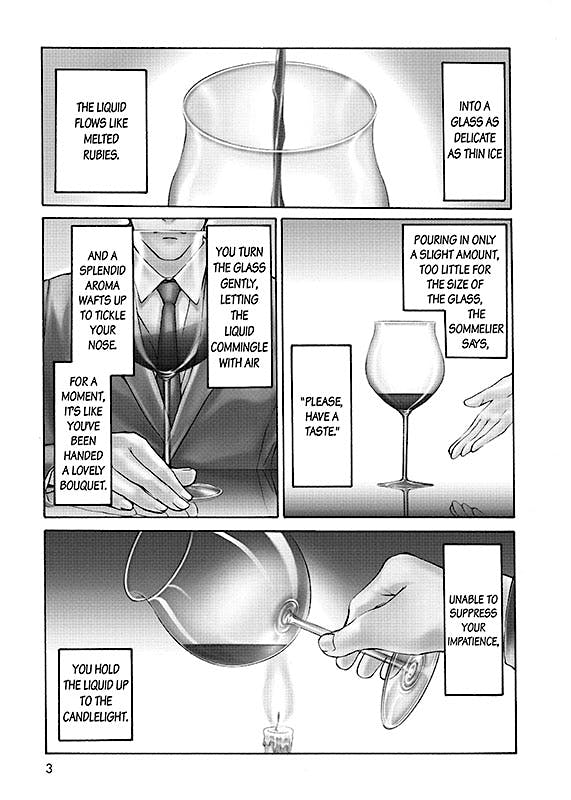 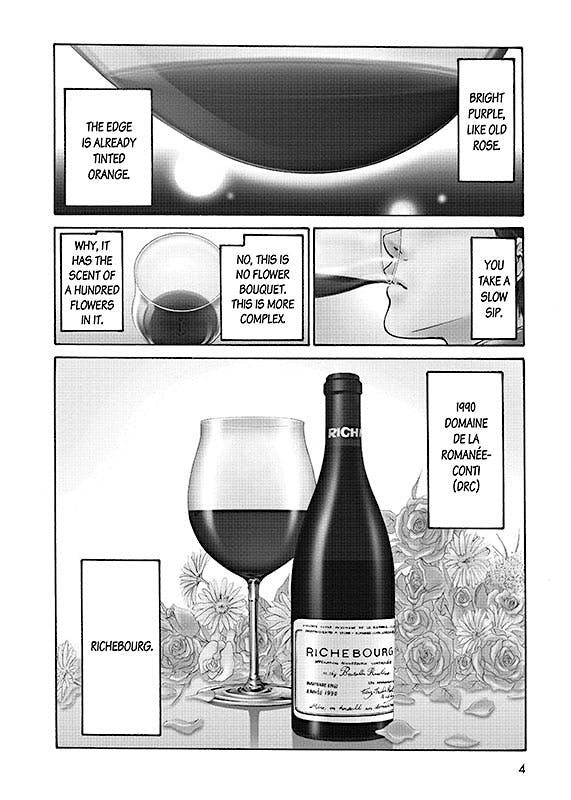 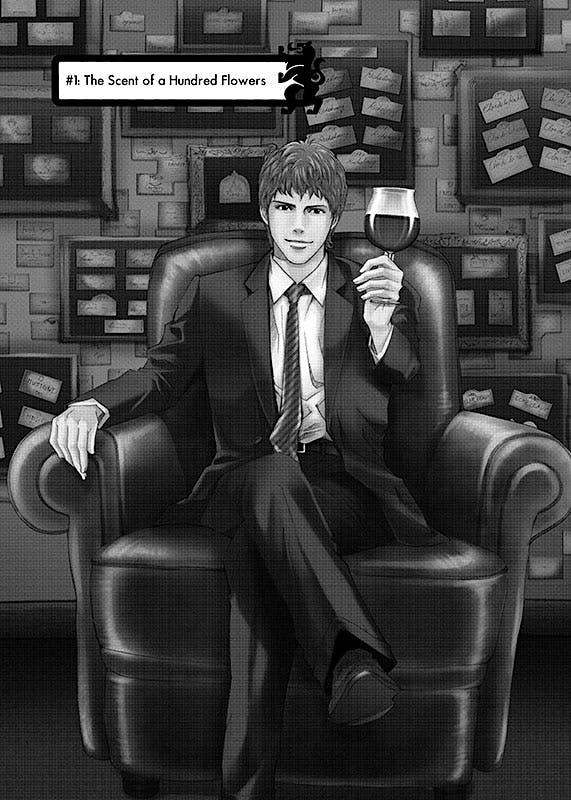 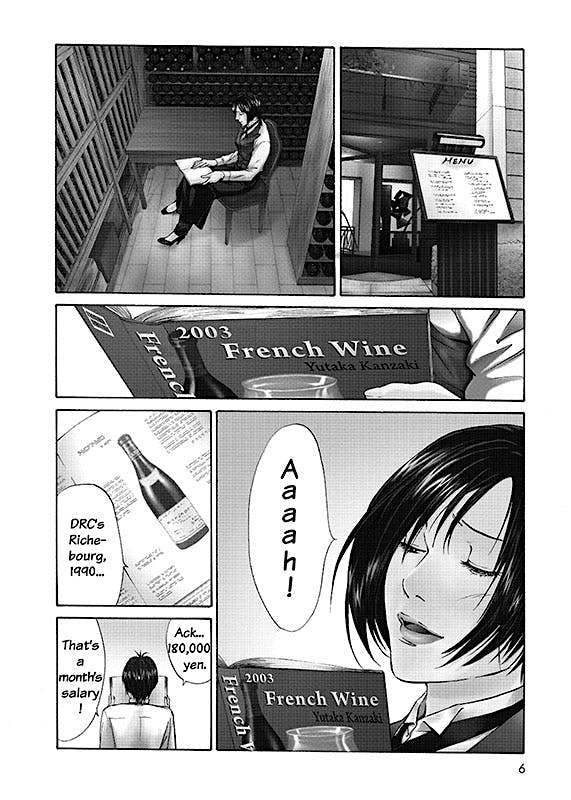 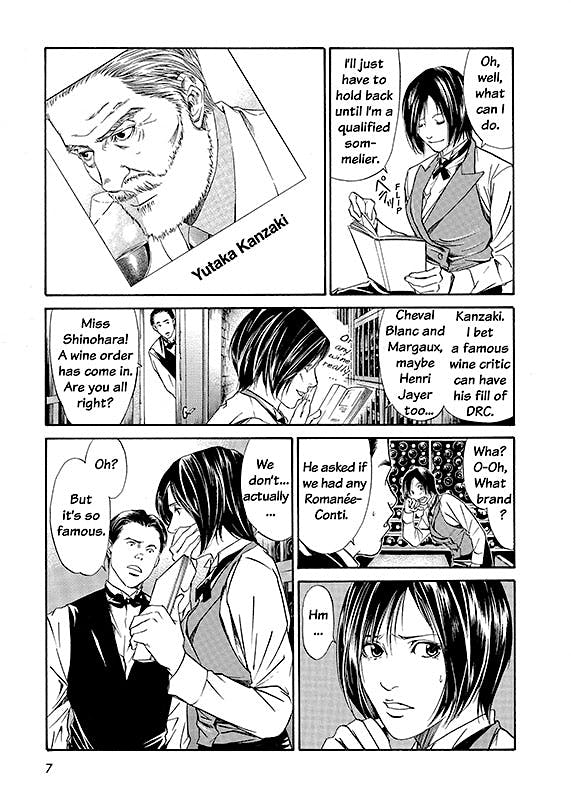 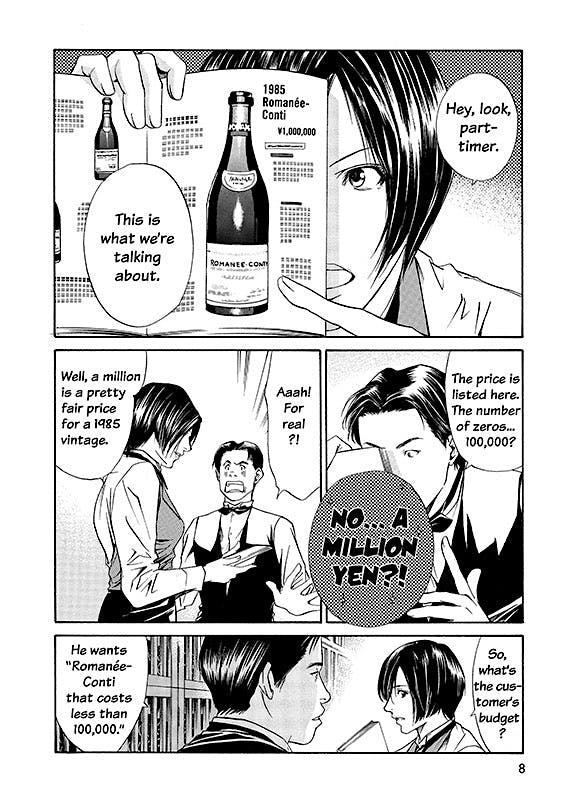 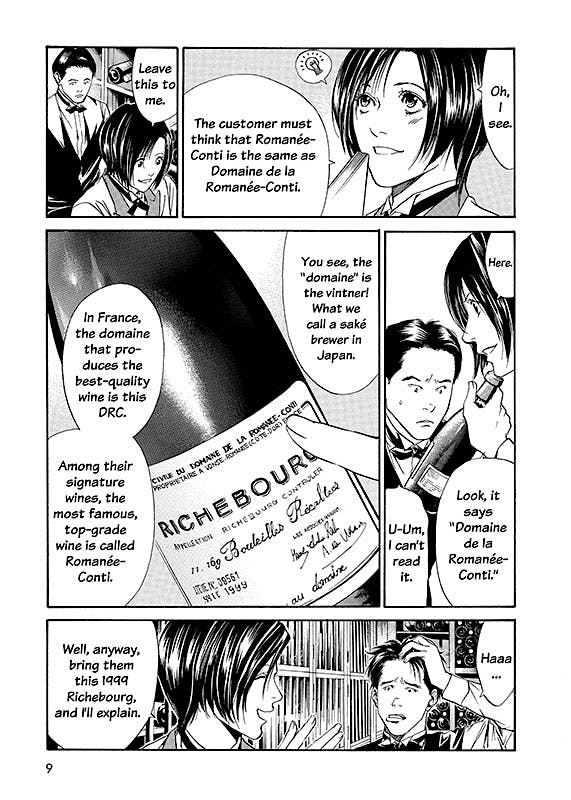 The Kibayashis already had a lengthy catalog of mangas—mysteries, thrillers, sci-fi—when they began The Drops of God, but the idea of a wine-centric comic adventure came naturally to them: They loved wine from the first time they tasted a 1985 Domaine de la Romanée-Conti Echézeaux. "We experienced this [tasting] as if we were struck by lightning: a picture scroll of the history, people and culture behind that one bottle of wine revealed itself before us," they told Unfiltered via email. "We remember that shocking moment even today." They found themselves talking about wine and the stories behind it in creative ways: “'This wine is a woman.' 'Yes, this must be a glamorous woman with long, dark hair …' We discussed how we imagined the wines we drank like that." Soon, a story was born.

"Every single wine introduced in the manga was tasted by us, and they had to pass a certain standard," said the Kibayashis. "We didn’t want to introduce wines we personally found unattractive." Indeed, while young Shizuku enjoys some modest wines throughout his adventures, the "Twelve Apostles" he must identify are certainly standard-passers for most anyone (the thirteenth bottle is the "Drops of God"), starting with a 2001 Georges Roumier Chambolle-Musigny Amoureuses, moving to Château Palmer and on through greats of the Rhône, Italy, Spain, California and beyond.

The success of the series, and its influence on the broader wine world, came as a surprise to the Kibayashis. In Japan, wines were advertised as "as seen in The Drops of God!" and the pair heard tell of Korean companies buying all the wines in the series to educate employees.

"It works on this level of entertainment, at the same time giving you, in a really digestible way, this useful information about something that a lot of people feel kind of intimidated by," said Lu. "And I think it just opened up this entire world for a lot of its readers."

Exclusive newly translated excerpt from The Drops of God, Vol. 9, © Tadashi Agi and Shu Okimoto (2019), ComiXology and Kodansha Comics. Panels on each page should be read from right to left. 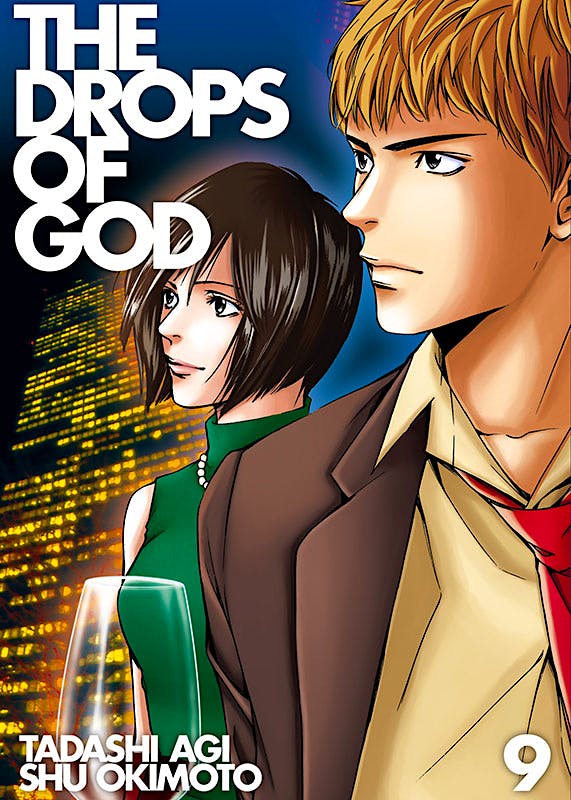 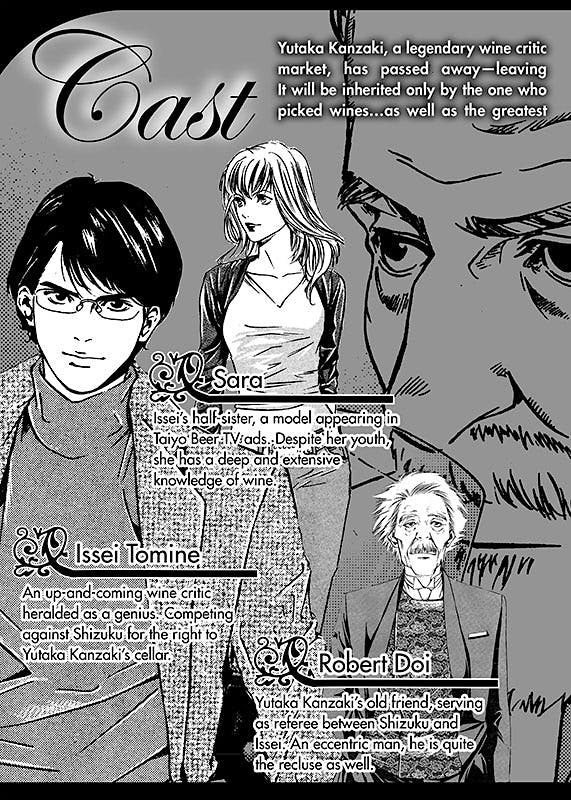 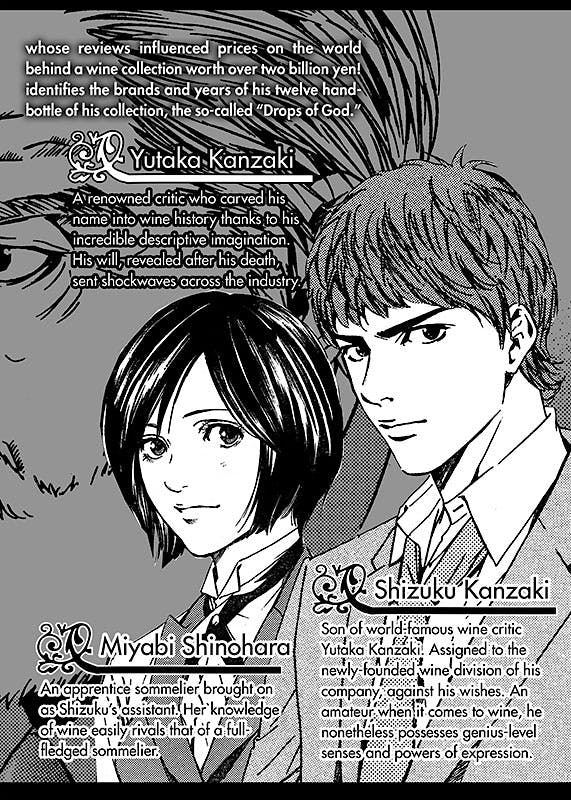 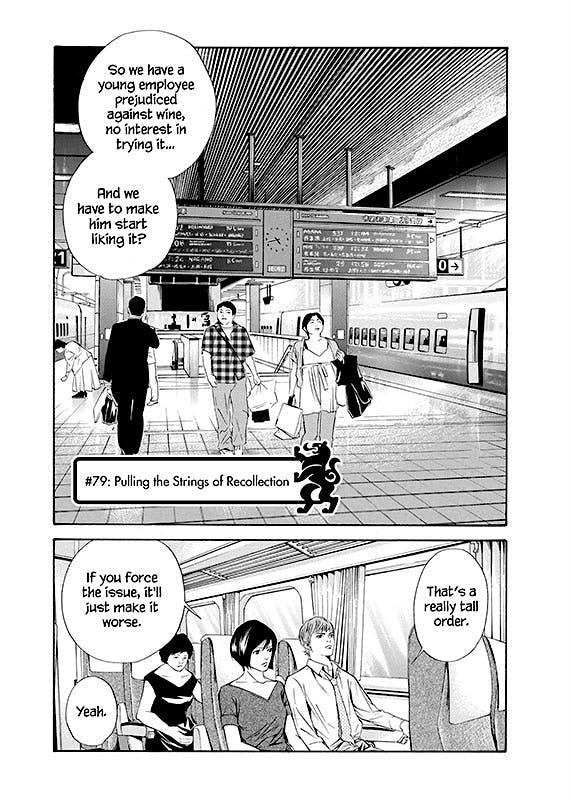 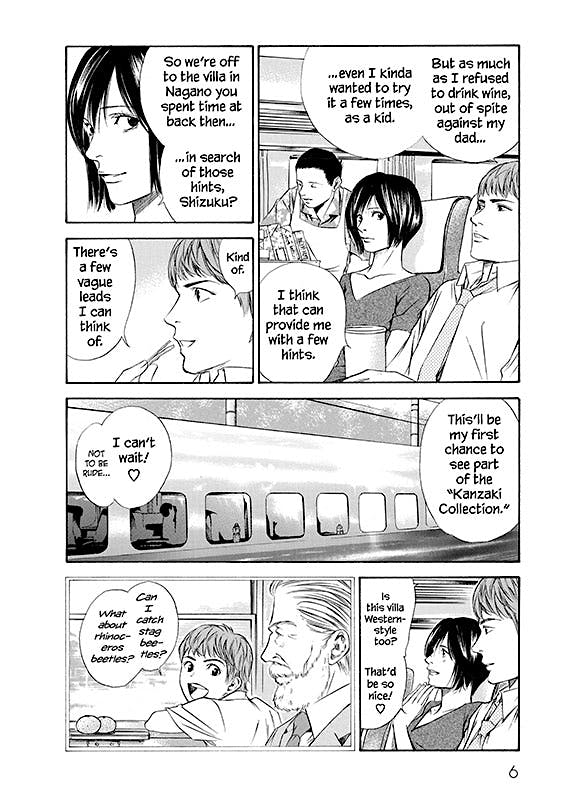 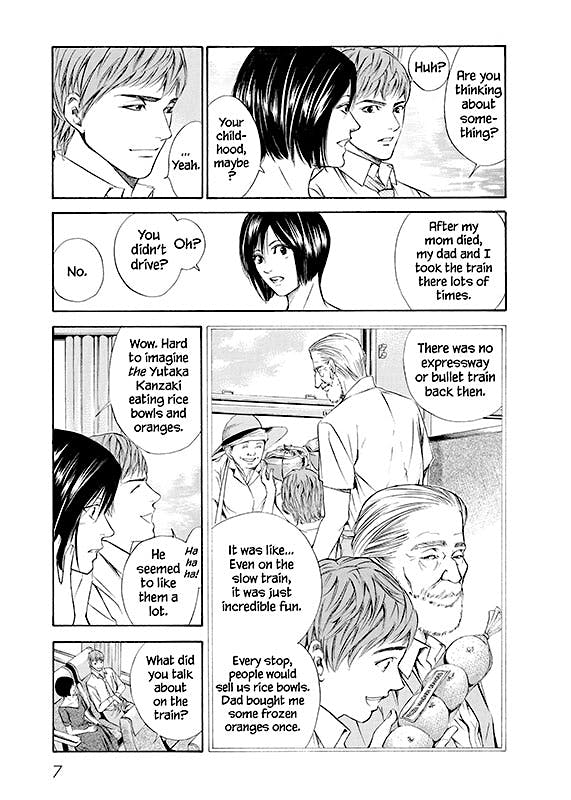 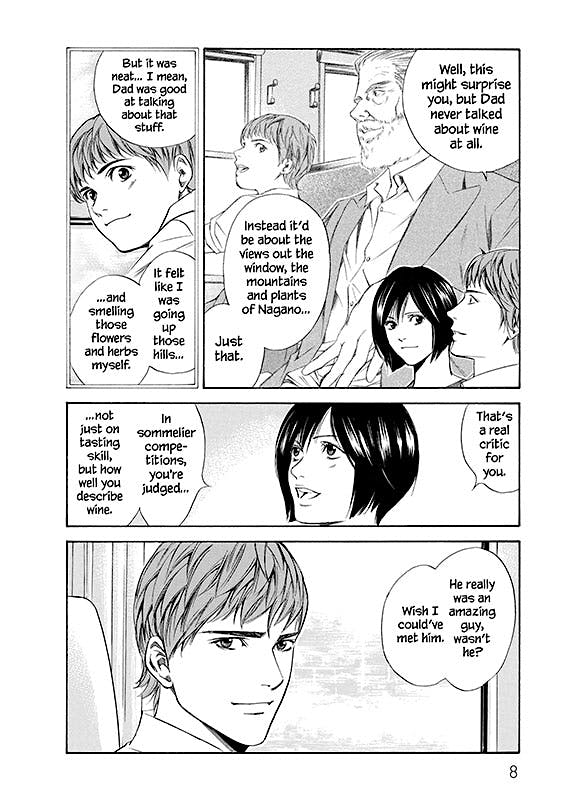 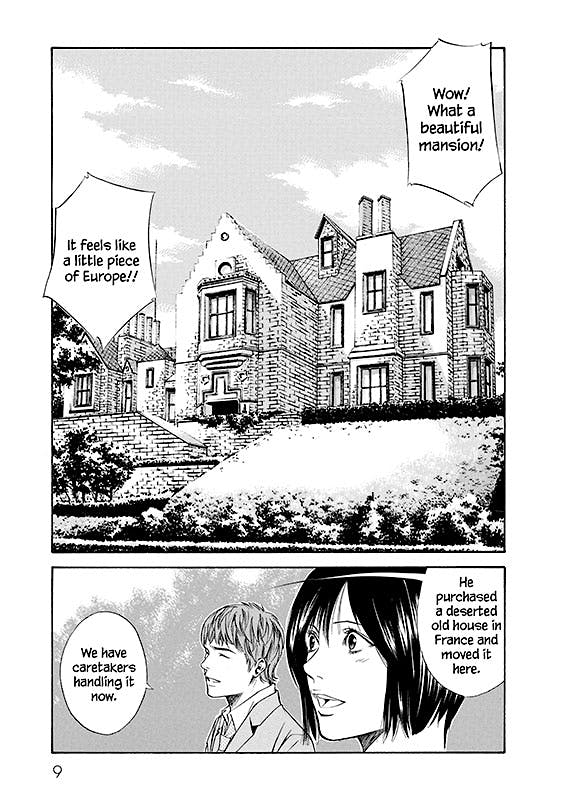 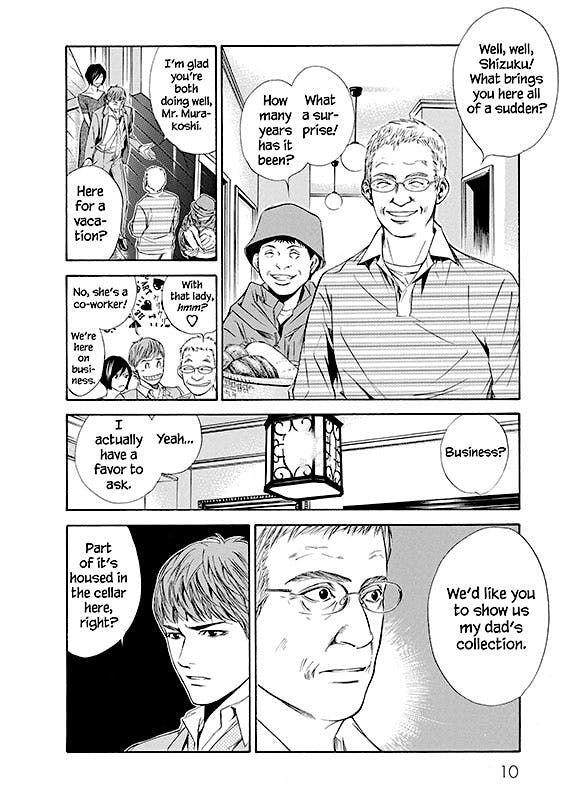 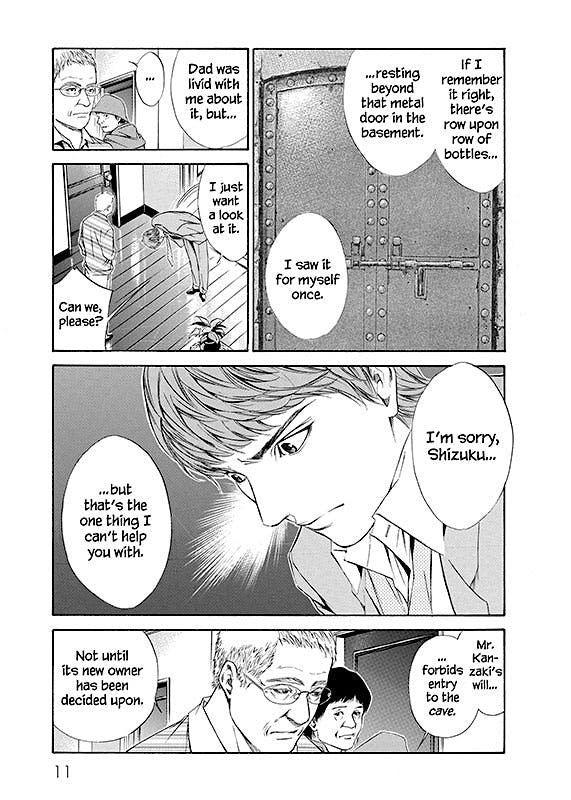 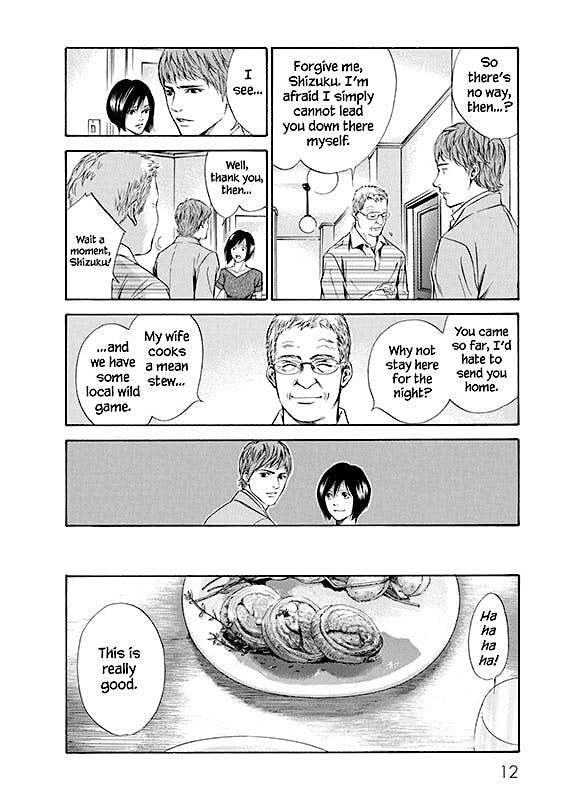 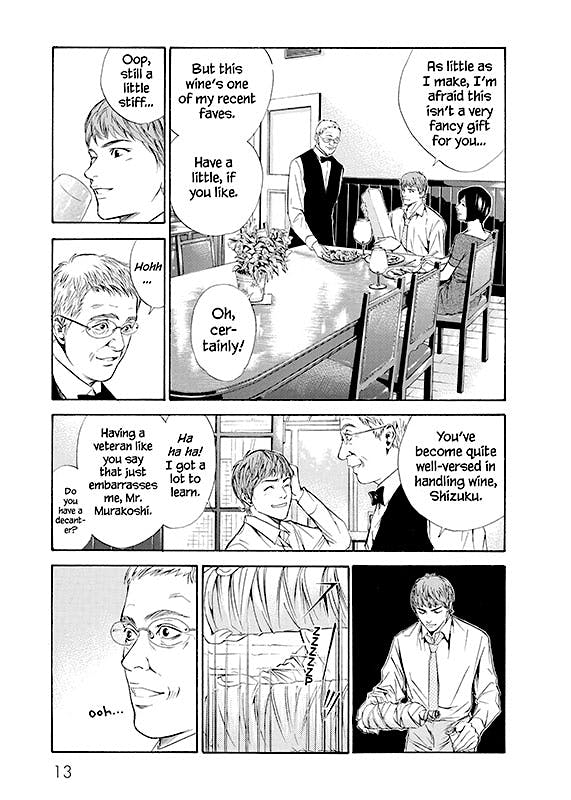 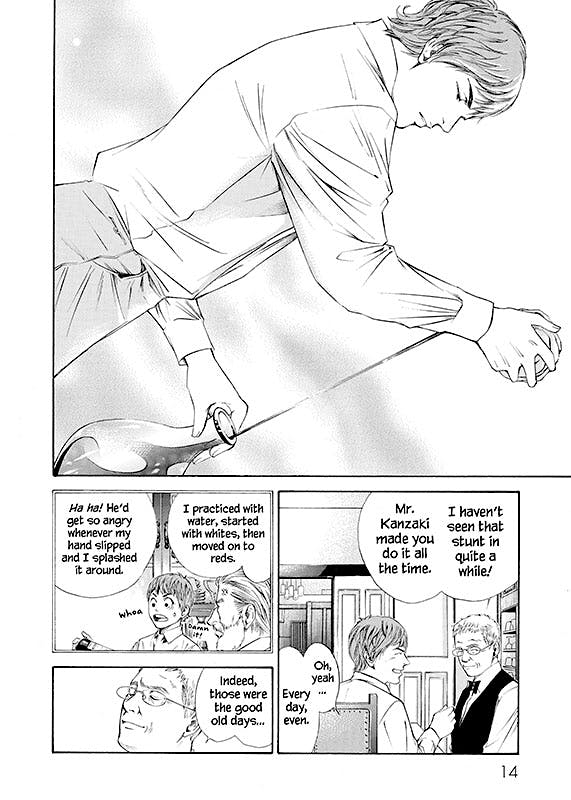 The Kibayashis are optimistic about how the series will play with English readers and hopeful it will open up the world of wine for more young drinkers. "A lot of young people haven’t experienced wine or know much about wine. For them, wine is a beverage that presents hurdles. But in The Drops of God, the main character has no knowledge of wine. He starts tasting wines one by one and starts out with expressions like, 'This is a very good wine. It’s like the song by Queen.' Wouldn’t you be tempted to taste the exact same wine and experience that?"

The first eight volumes first got an English translation in 2011; they have been re-edited and given new cover art, while the remaining 36 will be released over the course of the next year. "Whether you're a wine connoisseur, a seasoned manga reader, or you've never read comics before, The Drops of God provides a wonderful story that captivates from page one," said Chip Mosher, ComiXology’s head of content, told Unfiltered via email. The books are currently free online to Prime and Kindle Unlimited members.

In tandem with the new release, the Kibayashis are launching a Drops of God wine club this month, called the Wine Salon, in partnership with Peter Chiang, CEO of Napa winery Kanpai Wines. It will comprise online wine sales and meetups (one of the first is at chef Thomas Keller's Ad Hoc in Yountville, Calif.), "where people [can] openly and freely discuss their own thoughts, emotions, stories and memories relating to wine," explained Chiang. Finally, there's a new Drops of God–themed version WineGame, the tasting app from José Andrés' ThinkFoodGroup that launched last year. We were touched to hear they decided to develop the idea in part because they saw The Drops of God and WineGame appear right here in the Unfiltered column. So obviously we're rooting for these crazy kids and will be following the vinous trials and triumphs of young Kanzaki closely.