Vintners in the Adelaide Hills wine region of South Australia are assessing their vineyards and properties after a deadly bushfire swept through the region late last month. More than 60 vineyards and wineries have been impacted, with some vintners losing all of their grapes just a few months before the start of the harvest.

The blazes are part of hundreds of wildfires that have burned across the continent for several months now. Record temperatures combined with ongoing droughts and high winds have made this one of the nation's most serious fire seasons ever. At least 18 people have died so far, and more than 14.6 million acres of land have burned. Thousands have evacuated in the states of Victoria and New South Wales. The flames have engulfed entire towns and sent massive plumes of smoke into the air, triggering emergency air-quality declarations.

The Cudlee Creek fire ignited on Dec. 20 in the mountains east of Adelaide, the capitol of South Australia. Fueled by hot, dry and windy conditions, the blaze scorched 57,000 acres and destroyed more than 80 homes. One person was killed. While the fire has been declared contained, fire crews continue to battle other fires in the surrounding area including on Kangaroo Island, just off the coast.

Adelaide Hills is one of Australia's best-known cool climate wine regions. It's located in the Mount Lofty Ranges, and borders the Barossa Valley to the north and the McLaren Vale to the south. The region is home to 90 different wine labels with around 8,150 acres of vineyards.

Residents and farmers are still assessing the scale of the destruction. “Broadly we know that 30 percent of the region’s vineyards were in the fire area but the damage to all of these is yet to be determined,” Kerry Treuel, executive officer at the Adelaide Hills Wine Region industry association, told Wine Spectator in an email.

Some vintners are reporting significant damage to both their grapes and vines. Wildfires usually burn the grasses underneath vines and the trellising posts, but these blazes have been hot enough and slow-moving enough to burn some of the vines to a crisp.

Grapes were even more impacted. The fires arrived as the grapes were still ripening. Harvest typically occurs between February and March in the Southern Hemisphere, but vintners can start picking their grapes as early as January in the warmest regions of Australia. The fruit simply roasted on the vine.

Viticulturist Prue Henschke said Henschke lost its entire crop from its Lenswood Vineyard. When Prue and her husband Stephen purchased the land, it was planted to apple orchards. After a bushfire engulfed the property in flames in 1983, the couple replanted the land to a mix of grapes including Chardonnay, Riesling, Pinot Noir and Merlot. 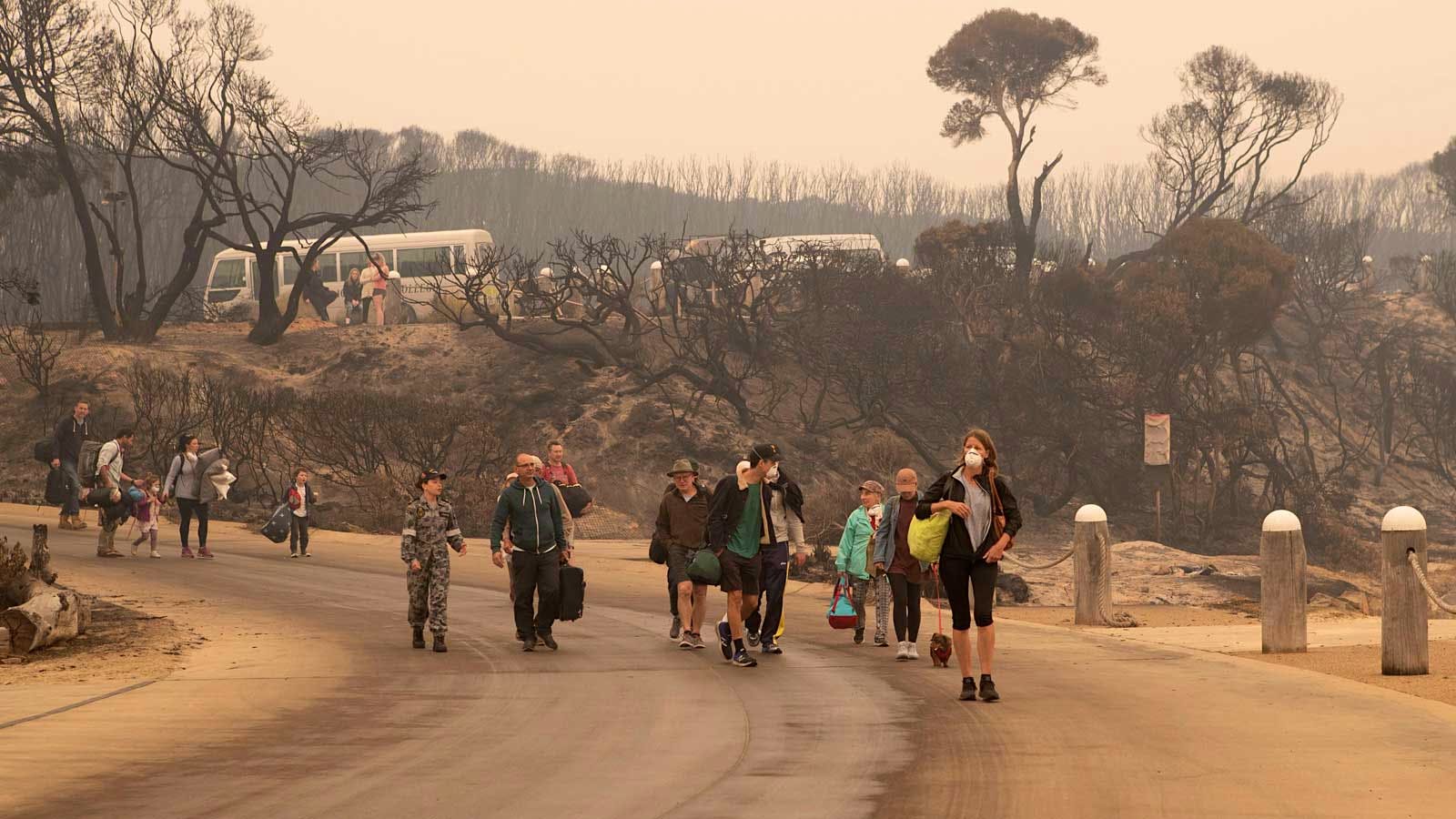 Victoria residents walk down to the beach at Mallacoota to evacuate from wildfires on Jan. 3. (Photo by Australian Department of Defence/Helen Frank/Handout/Anadolu Agency via Getty Images)

Andrew Nugent, founder of the winery Bird in Hand, told Wine Spectator via email, "Total crush levels for wineries will be reduced. It will mean no income for many growers and significantly reduced income for many more."

The fire burned through portions of Bird in Hand's Shiraz and Sauvignon Blanc vineyards and threatened buildings on its estate in the town of Woodside, including the winery, an art galley and a restaurant. "We are not certain yet of the full extent of the impact as the fire was so recent," said Nugent.

The loss of this year's crop could spell bankruptcy for some vintners. "Growers and wineries are in a particularly difficult spot in terms of finances after a 2019 vintage that saw a crop at least 50 percent below average," said Nick Knappstein, brand manager for Riposte Wines, which he runs with his father Tim. "The damage from the fires to vineyards and lack of fruit flowing from that will see some growers and wineries unable to continue."

Knappstein said that three of the vineyards Riposte buys grapes from were so damaged that they will not produce this year. The trellises and irrigation systems will also need to be replaced. He estimates that 30 percent of the region's vineyards will not bear a crop this year. "The best support we as a region could possibly have is for consumers to consciously buy Adelaide Hills wines," he said.

It could take years for the wine industry to recover. While some vineyards acted as a firebreak, those that were badly burned will need replanting. If they do recover, they won't bear fruit until 2022. "It is a case-by-case scenario depending on the damage," said Nugent. "Those [vines] that have been singed will reshoot in the spring and be productive again for vintage 2021." But it could take three to four years for new vines to bear a crop.