Auberon Waugh, the late English writer and wit, famously hated many things—but few more than bad wine and bad hosts. The bon vivant and troublemaker once described a wine as “a collapsed marquee fallen into a rotting silage pit" and wrote that “hosts who skimp on their wine should be exposed, ridiculed and humiliated.” These and other withering critiques, pensees, bon mots and general tidbits of advice appear in the classic collection of the author's writings Waugh on Wine, republished last month by Quartet Books after decades out of print.

Waugh, son of the novelist Evelyn, went by "Bron," but unlike the other wine-loving, trash-talking Bron, had a less-than-auspicious early career. Rusticated (a fancy word for expelled) by his professors at Oxford University, he joined the national service, where, upon becoming annoyed by his faulty machine gun, he shook the barrel and accidentally fired several bullets into his chest. He lost his spleen, one lung, several ribs, and a finger. 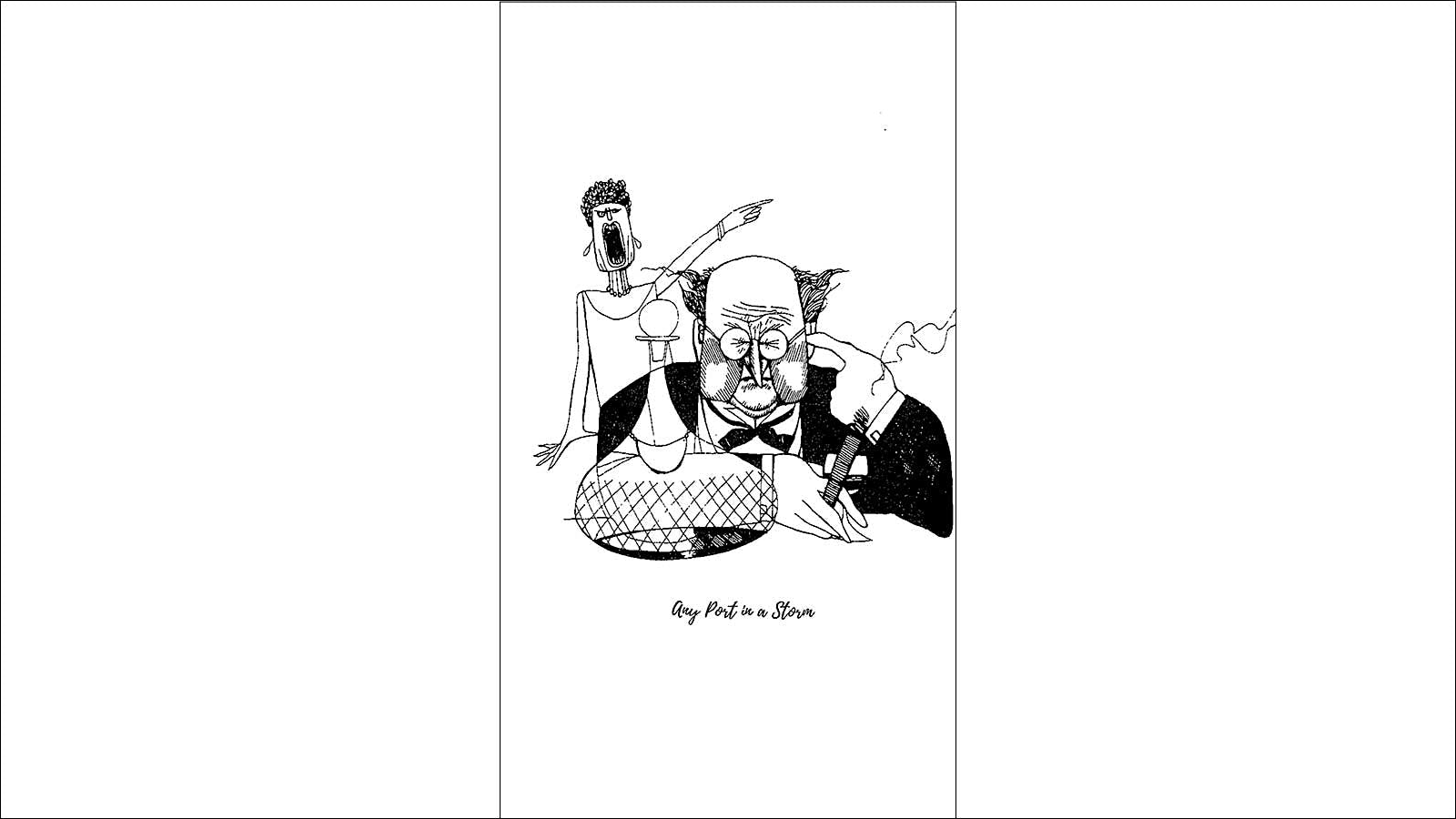 Humorist and illustrator Willie Rushton was a longtime friend and collaborator of Waugh. (Courtesy of Quartet Books)

That put him in a permanent mood to pen such pronouncements as "bad Spanish wine furs the tongue, turns the breath sour, upsets the stomach and produces a murderous hangover" and "it has been said that if you leave an Italian with a butt of rainwater, four mail-bags of mislaid holiday postcards and a hundredweight of banana skins, he will produce twenty cases of vino di tavola within a fortnight" (not necessarily an insult!). Naim Attallah, who owns Quartet and was good friends with Waugh, told Unfiltered via email, “I decided to republish this book simply because Bron was funny, contrary and entertaining." 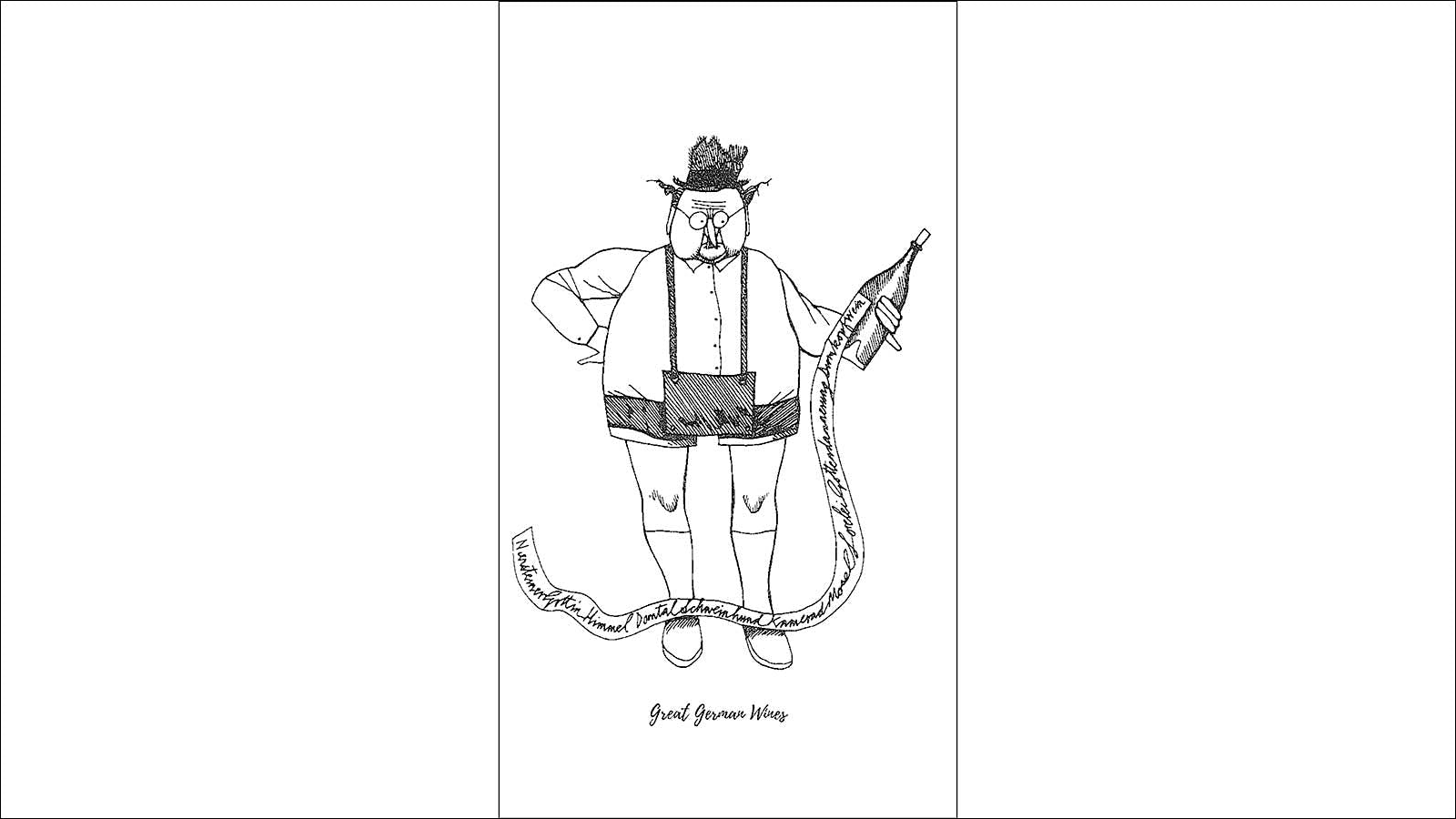 Riesling with weed was a Waugh pairing rule. (Courtesy of Quartet Books)

Some of Waugh's wine wisdom is dated, of course—the original volume was published in 1987 and Waugh died in 2001—but he was ahead of his time on the wine and weed trend, advising that kabinett and spätlese Rieslings are “the only wines I have discovered which go well with pot, having a soothing and fragrant influence.” 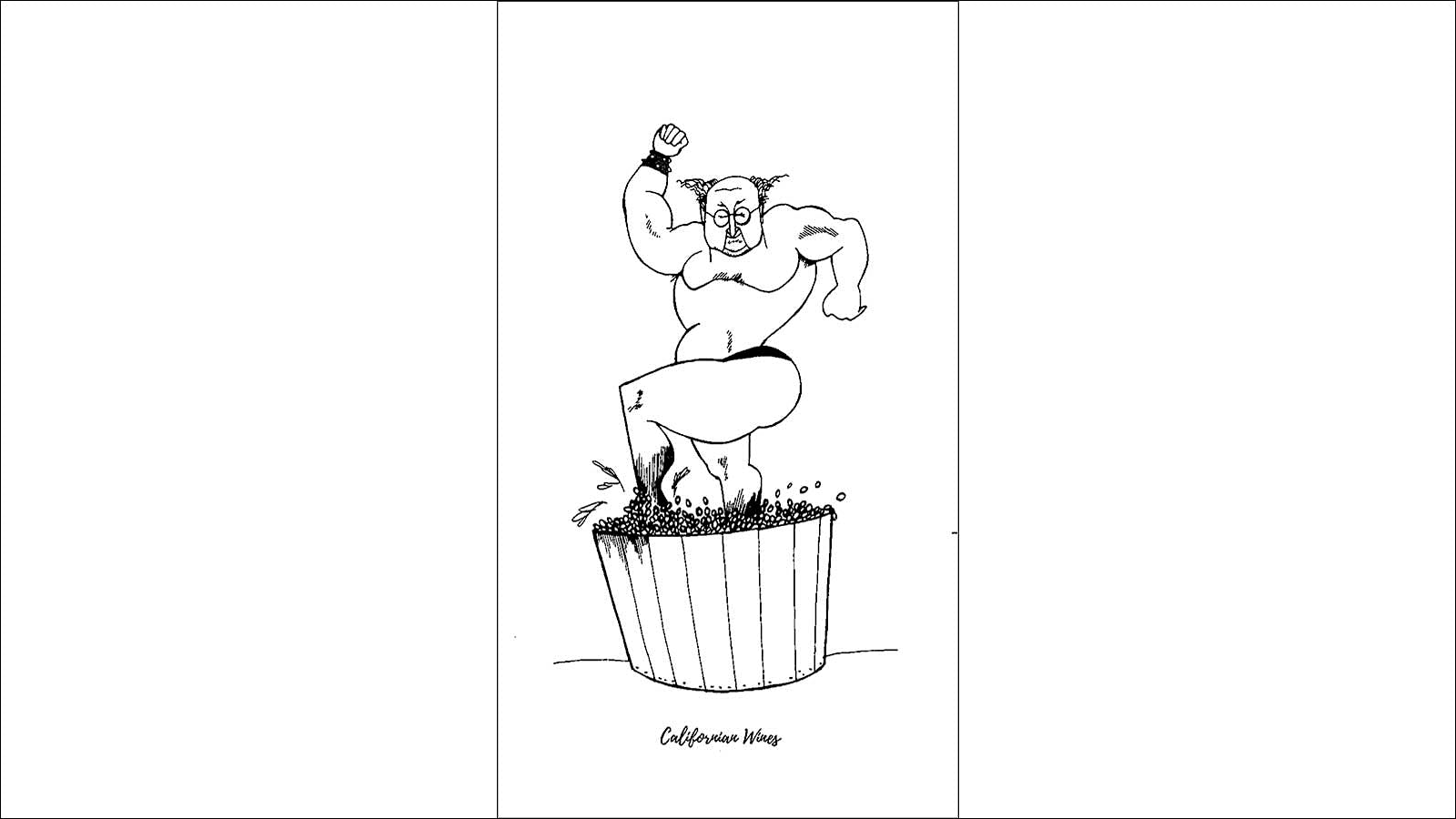 Old World through and through, Waugh nevertheless admitted, "There can be no doubt that the Californians, for all their psychobabble and personal hygiene, are producing some very good red wines indeed." (Courtesy of Quartet Books)

In the new intro, Attallah praises his chum's “unsnobbish approach to wine” and remembers Waugh's reaction when he gifted him a 1947 Cheval-Blanc on his birthday: "The joy on his face as he held the bottle in his hand ... is still etched in my memory." Some classics can please even the greatest contrarians.

In cheeses, in wine, in the exclamations of beloved talking cartoon candlesticks, the French love their bleus! Yes, the kids adore vin bleu right now, despite (or because of?) one problem: Authorities hate this one weird wine! And a new study out of Paul Sabatier University in Toulouse that found synthetic dyes in two blue wine brands may finally give them the means to combat this concerning and somewhat embarrassing epidemic. 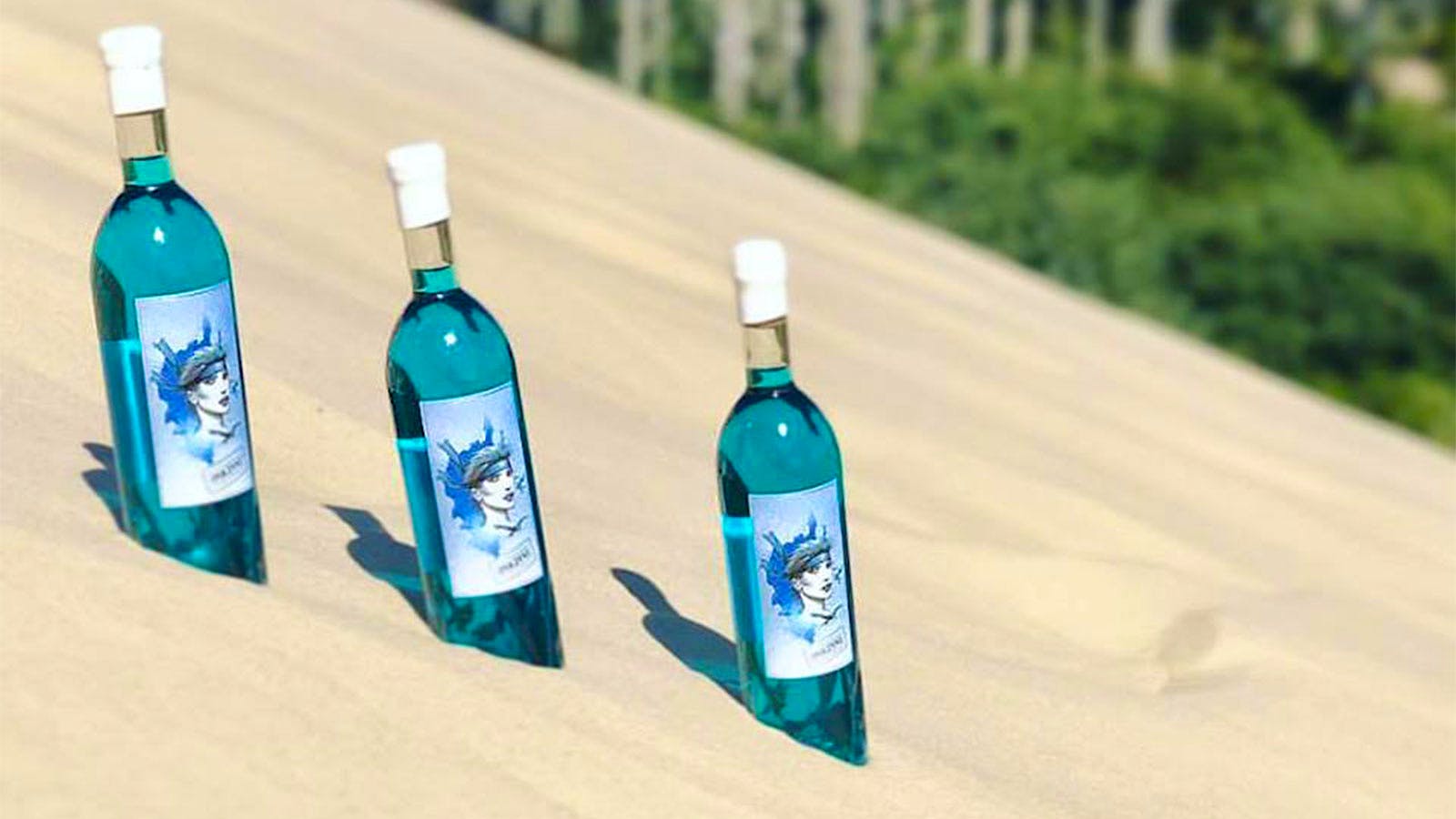 The inventors of said blue drinks, Imajyne and Vindigo, have insisted they are made naturally, utilizing spirulina, a blue-green algae product, in the case of the former. Using UV-Vis spectroscopy and high-resolution mass spectroscopy, however, the Toulouse researchers found the magic ingredient was actually … yeah, just food coloring, something called Brilliant Blue FCF, or E133. They also found no traces of spirulina. “Because this result was not expected, and was very interesting, we decided to publish it as a scientific paper” in the journal European Food Research and Technology, supervisor of the study Dr. Fabrice Collin told Unfiltered via email.

Very interesting indeed! Thought the public prosecutor of Corsica, where Imajyne is concocted; he has opened an investigation into deceptive marketing practices and illegal use of dyes in wine production, which in France can get you sentenced to two years of hard time in the ol' Bastille and a fine of up to $420,000, according to the London Times. The CEO of Imajyne has denied using E133, but has conceded to changing the labeling of the drink from “wine” to “flavored cocktail,” a similar appeasement offered in the great Gïk Affair of 2017. But look, in France, if you try to make wine fun or silly, you have to go to jail for two years, those are the rules.

American poet Alan Seeger joined the French Foreign Legion in 1914, penned the dark but defiant poem “I Have a Rendezvous with Death,” and found that fate two years later at the Battle of the Somme, at 28. A century later, the Taittinger family has acquired the original manuscript of one of Seeger’s other works, “Champagne 1914-15,” handwritten from the war front in the Marne in May 1915. Pierre-Emmanuel Taittinger purchased the document from an American collector for an undisclosed sum.

The Champagne vintner has long been a passionate fan of the romantic poet and the poem, both an ode to Champagne wines and a tribute to the soldiers who fell in the fields of the region. Seeger’s verse concludes:

Drink to them—amorous of dear Earth as well,
They asked no tribute lovelier than this—
And in the wine that ripened where they fell,
Oh, frame your lips as though it were a kiss. 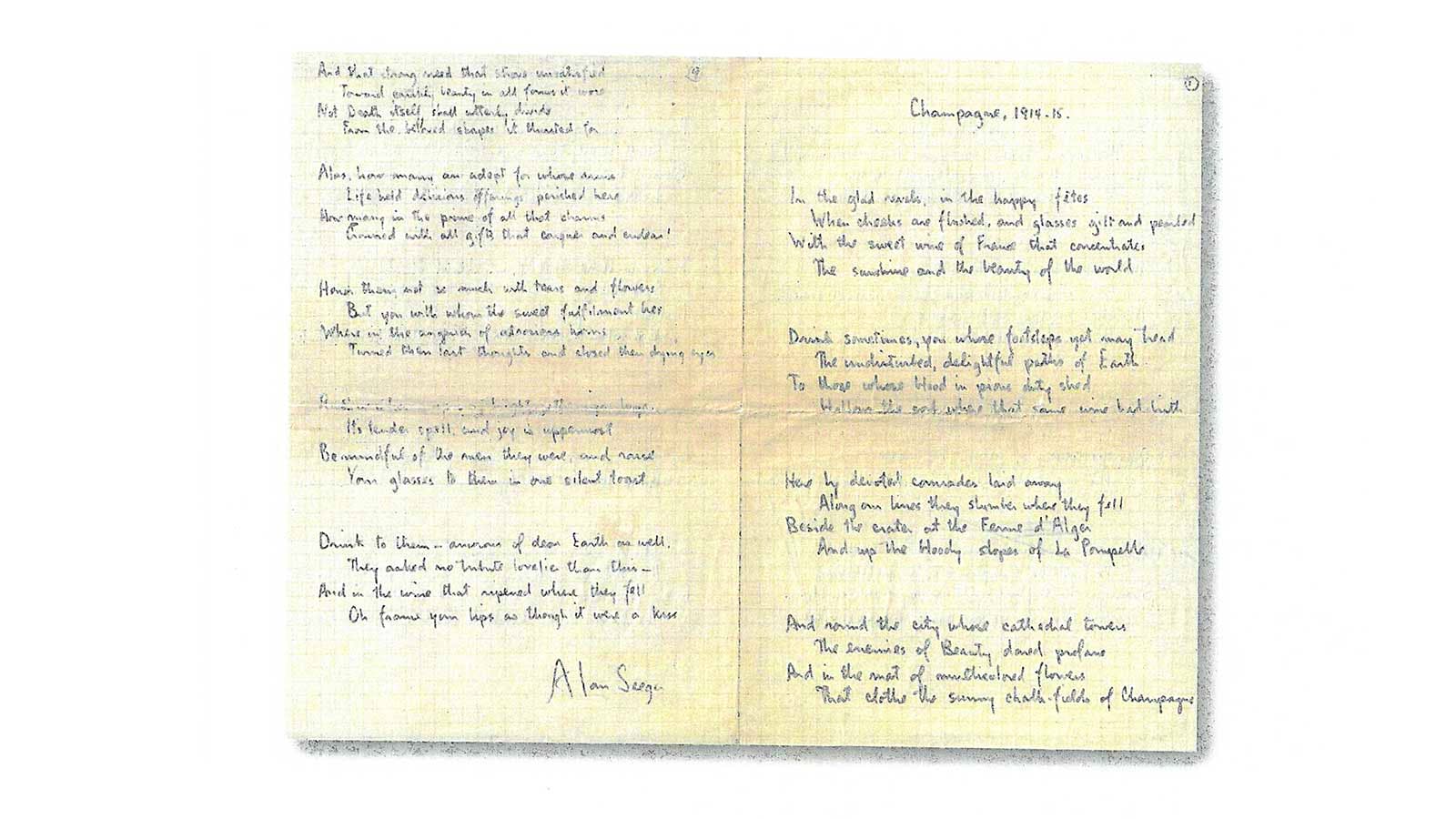 During both World Wars, Champagne endured brutal battles, and the Taittinger family both suffered and triumphed throughout. Pierre-Emmanuel’s uncle died in WWII, and his grandfather fought in WWI. In fact, in 1932, the latter Taittinger bought the manor house used as a command post where he’d recuperated from a combat illness, Château de la Marquetterie; it is now the iconic Taittinger maison.

“My father grew up reading the history of the war and stories of patriotism,” Vitalie Taittinger told Unfiltered. “Alan Seeger incarnated that patriotism and poetry.”

Pierre-Emmanuel described Seeger as “a classic poet in modern life,” who wrote in his diary before dying, “I never took arms out of any hatred against Germany or the Germans, but purely out of love for France.” (Seeger had moved to Paris in 1912, drawn to the bohemian French literary scene before the war.)

For now, the single-sheet manuscript is on temporary loan to the museum at the Fort of Pompelle, a site mentioned in Seeger’s poem and WWI memorial, but the document will reside at Maison Taittinger. “It’s very fragile,” said Vitalie. “We will do something elegant and discreet with it.”