For more than five months, bushfires blazed and smoldered along the southeast coast of Australia, burning millions of acres, destroying thousands of homes, devastating wildlife and shrouding cities in smoke. The fires took the lives of 34 people.

While the flames are out now, the impact on the Australian wine industry is still being assessed. There are no official figures on the exact acreage of vineyards that have been lost—nor the value to the industry—because vintners must see how vines recover both from the fires and the searing heat over the next year.

What is clear is that most wine regions were largely spared, but there were a few notable exceptions. And the biggest impact of all may be smoke taint. While many winemakers are not sure if their grapes and wine were affected by the smoke, several report that they expect to sell no wines from the 2020 vintage.

Andreas Clark, CEO of Wine Australia, says that less than 1 percent of Australia's total vineyard footprint of roughly 361,000 acres was burned in the fires. While nothing should diminish the dreadful devastation that has taken place, many of Australia's most renowned wine regions, such as the Barossa Valley, McLaren Vale, Clare Valley, Coonawarra, Margaret River and Yarra Valley, as well as Tasmania, have not been impacted by fire or smoke taint. Yields are down across the board, however, due to an ongoing drought in many areas as well as difficult weather conditions during flowering.

Just three of the country's 65 wine regions—Adelaide Hills and Kangaroo Island in South Australia and the Tumbarumba region of New South Wales—suffered burned vineyards. Some may have to be replanted, while others may recover.

In the cool-climate Adelaide Hills region, known for its Chardonnay, Pinot Noir, and Sauvignon Blanc, about 14 percent of the vineyard acreage fell within the fire zone. Of 64 burned vineyards, the Lenswood vineyard of Eden Valley winery Henschke was the most high-profile vineyard to be scorched.

"We've never experienced anything like this before," said viticulturist Prue Henschke. "Yet nine weeks later, it feels like recovery, not loss. After some rain, the vines (most of which are on their own rootstocks) have burst into life. We're going to be able to chop off the burnt bits and recover about 90 percent of the vineyard."

Kangaroo Island's Islander Estate, owned by Jacques Lurton, president and chairman of Bordeaux's Vignobles André Lurton, was completely destroyed. "We're still in the cleanup process and I can't believe how much help we've been given," said Lurton. "We're very positive and have lots of different ideas about what to do next but I will always put my money on Kangaroo Island. I love this place."

It's also too early to evaluate the total impact of smoke taint, since harvest is still in process in many regions. Clark says Wine Australia estimates that less than 4 percent of the total average crush will be affected. 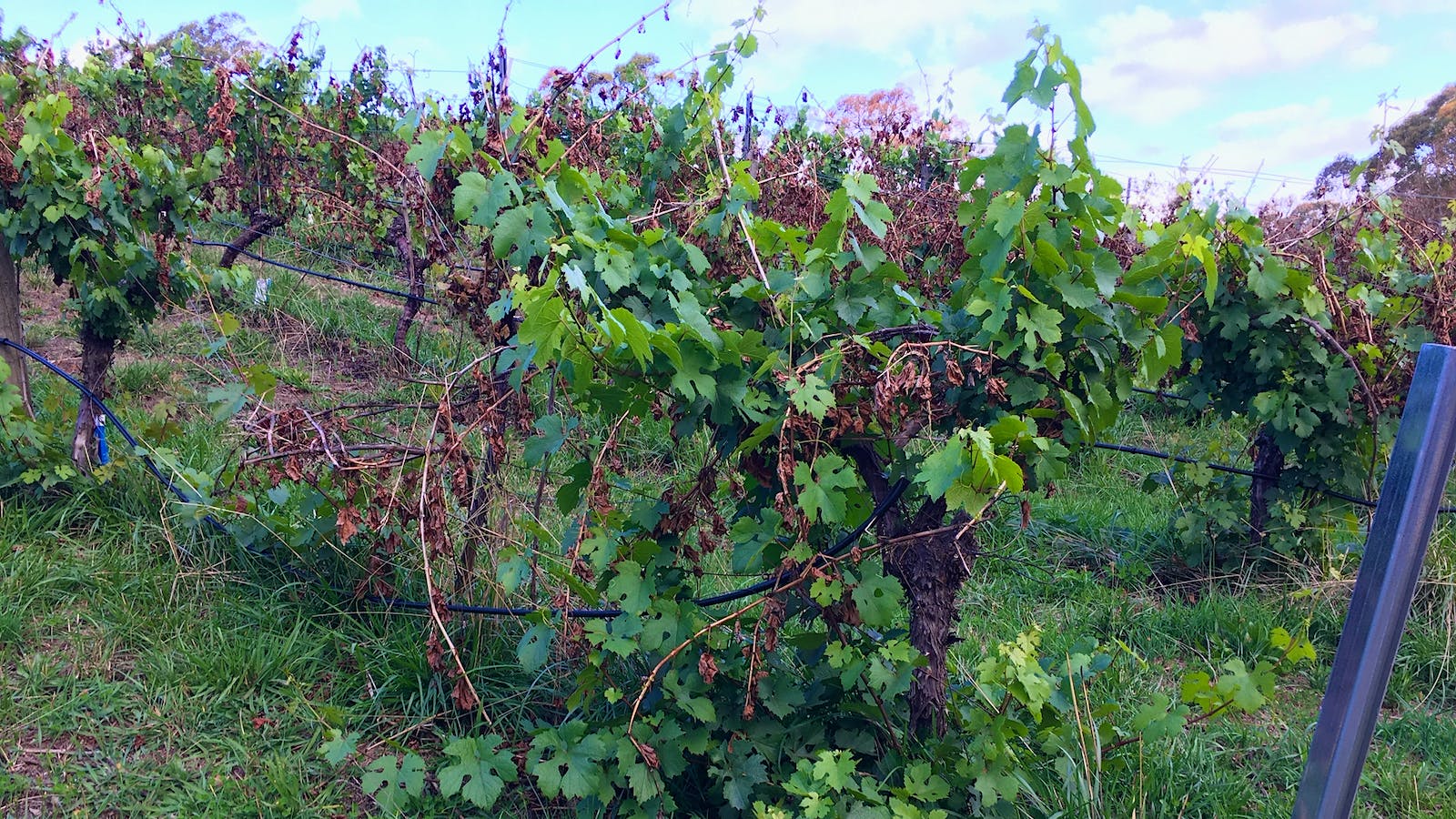 Just a few weeks after the fires, this Chardonnay vine in Henschke's Archers Vineyard in Adelaide Hills still has burned, brown shoots and leaves, but also has new green shoots springing to life. (Courtesy Prue Henschke)

Smoke taint has been felt most severely in the Hunter Valley. The bushfires were raging near there right up to harvest, while the Canberra District was also surrounded by smoke for a long period. Tumbarumba and Mudgee in New South Wales as well as King Valley, Beechworth and Gippsland in Victoria may also have smoke taint issues.

Australia is a world leader in smoke taint research because of the country's long history with bushfires. For the past 15 years, the Australian Wine Research Institute has been studying the impact of fires and smoke on wine grapes and wine.

It is already known that smoke affects the grapes, not the vines, and there is no carryover between seasons. When smoke is present, the risk is more serious the closer the vineyard is to the fire as well as when the smoke is "fresh." The greatest problems occur during ripening, just before harvest. The characteristics of smoke in wine can change over time, making it hard to detect.

"We're going to learn an awful lot more about smoke taint as a result of these fires," said Martin Shaw, winemaker and co-owner of Shaw & Smith in Adelaide Hills and Tolpuddle Vineyard in Tasmania's Coal River Valley. "You can't really test for it until grapes are about 8 Baumé, so there's only a small window between testing and harvesttime." In 2019, there were fires 43 miles from Tolpuddle Vineyard. "After doing tests, we thought we were safe. But nine months later, when our Pinot Noir was in barrel, we started to see the influence of smoke taint, so we did not release it."

Tyrrell's Wines managing director Bruce Tyrrell estimates that 75 percent of Hunter Valley's premium wines, which include Sémillon, Chardonnay and Shiraz, won't be bottled because of smoke taint, since the region was surrounded by bushfires for more than three months.

"We've learned that grapes grown on ridge tops close to fresh smoke are more impacted than grapes grown at the bottom of gullies where old smoke collects," said Tyrell. "Our Shiraz grapes were closest to the bushfires on the mountain so were most impacted, while the whites were farther away and less affected." Still, they've made only a fraction of their Chardonnay and Sémillon. Tyrrell's has offered to make wines experimentally to help the Australian Wine Research Institute refine its research.

Canberra District winemaker Tim Kirk of Clonakilla recently decided not to produce any wines from New South Wales in 2020 due to the intensity of smoke in the region for more than two months. "We've certainly had bushfires before but we've never experienced smoke like this," he said. "There was no way we could go ahead with the vintage."

Brokenwood winemaker Stuart Horden, also in Hunter Valley, confirms that yields were down not just due to smoke taint but also because of the longstanding drought. But while the 2020 growing season may not be remembered fondly, he predicts the industry will bounce back. "If you're in agriculture and not an optimist then you won't be in it for long," said Horden. "The 2021 vintage is not too far away. And besides, Australia is so large and so diverse, there'll always be some great wines from 2020."