On Vernon Kruger's 77th day living in a 500-liter wine barrel on a pole 80 feet in the air, we managed to get a call through to him. The professional commercial diver had recently broken a Guinness World Record for "longest duration pole-sitting in a barrel," smashing the previous record of 67 days set in 1997, also by Vernon Kruger. So … why?

Kruger, originally from Cape Town, was inspired to take up pole-sitting decades ago, when a friend dared him to see how long he could sit in a palm tree. At the age of 29, Kruger announced his presence as elite practitioner in the world of extended-duration high-elevation barrel habitation when he set his first world record, in the same town as his latest (though in a different barrel). Now 52, Kruger explained to us that this recent clamber back up was spurred by charitable inclinations: to “help someone, you know, if I can, with my efforts.” Through his charitable organization Up the Pole in Dullstroom, Kruger is raising proceeds to benefit a children’s home. 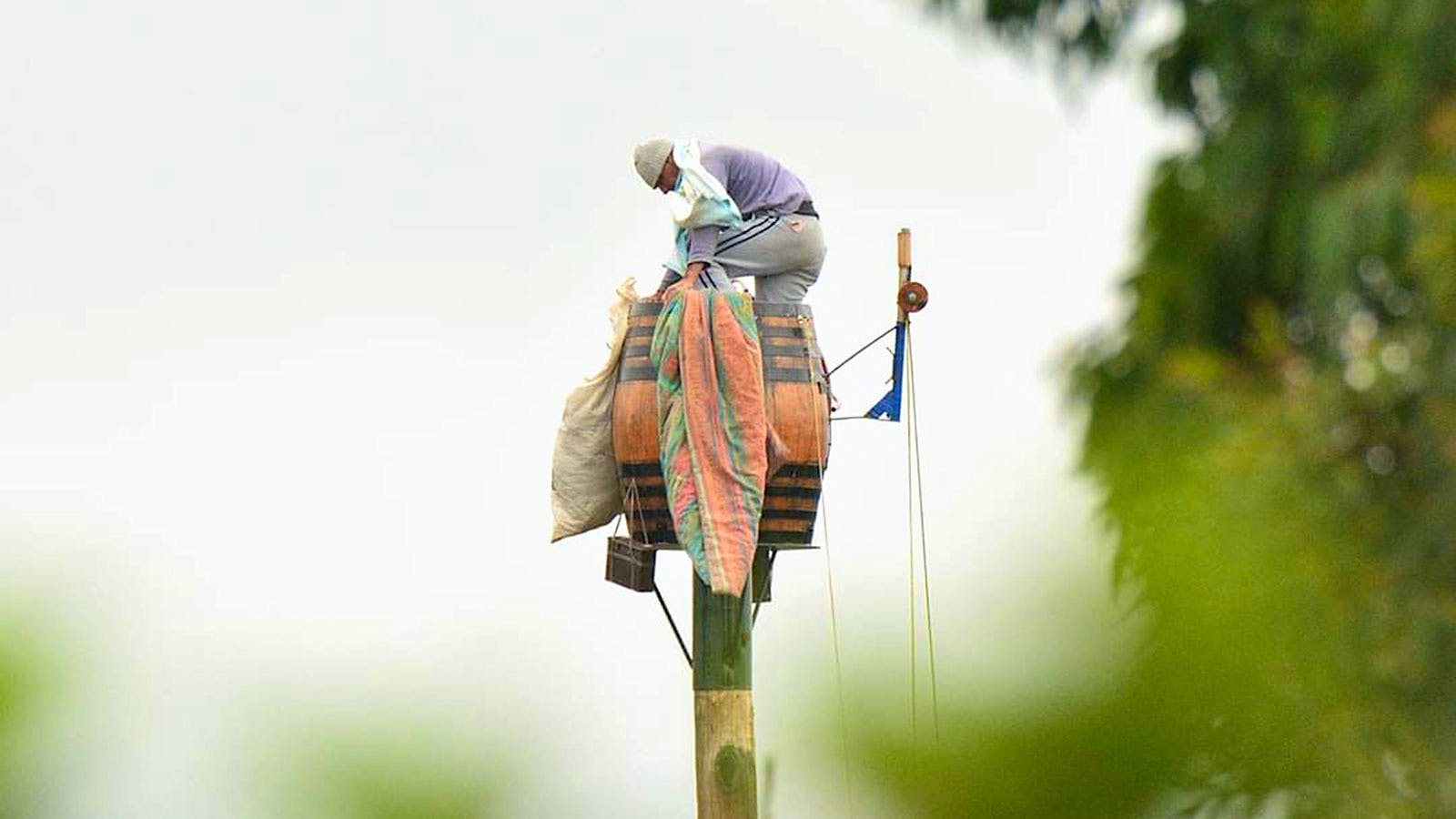 Man has always envied but rarely achieved the noble avian's gift of … perch. (Courtesy of Up the Pole in Dullstroom)

The endeavor hasn't been an easy one. The barrel itself is not intended for occupancy by adult humans (some are!), making it difficult to sleep, and Kruger has survived on food, water and supplies brought up to him by a pulley system. He narrowly dodged real danger when lightning struck the side of his barrel at one point with a “big crack sound.” (He was not injured.)

Although no South African winery is involved in Kruger’s stunt, he shared that he is, indeed, fond of wine, or was, anyway. “The barrel does smell a lot like old wine, because it’s secondhand—it’s a used wine barrel. I thought maybe I’d mature a little if I sit in the barrel long enough," he joked. “But nothing happened, I’m still the same.” Fans can find Kruger in his barrel until Feb. 1, when he will return to the ground via helicopter. 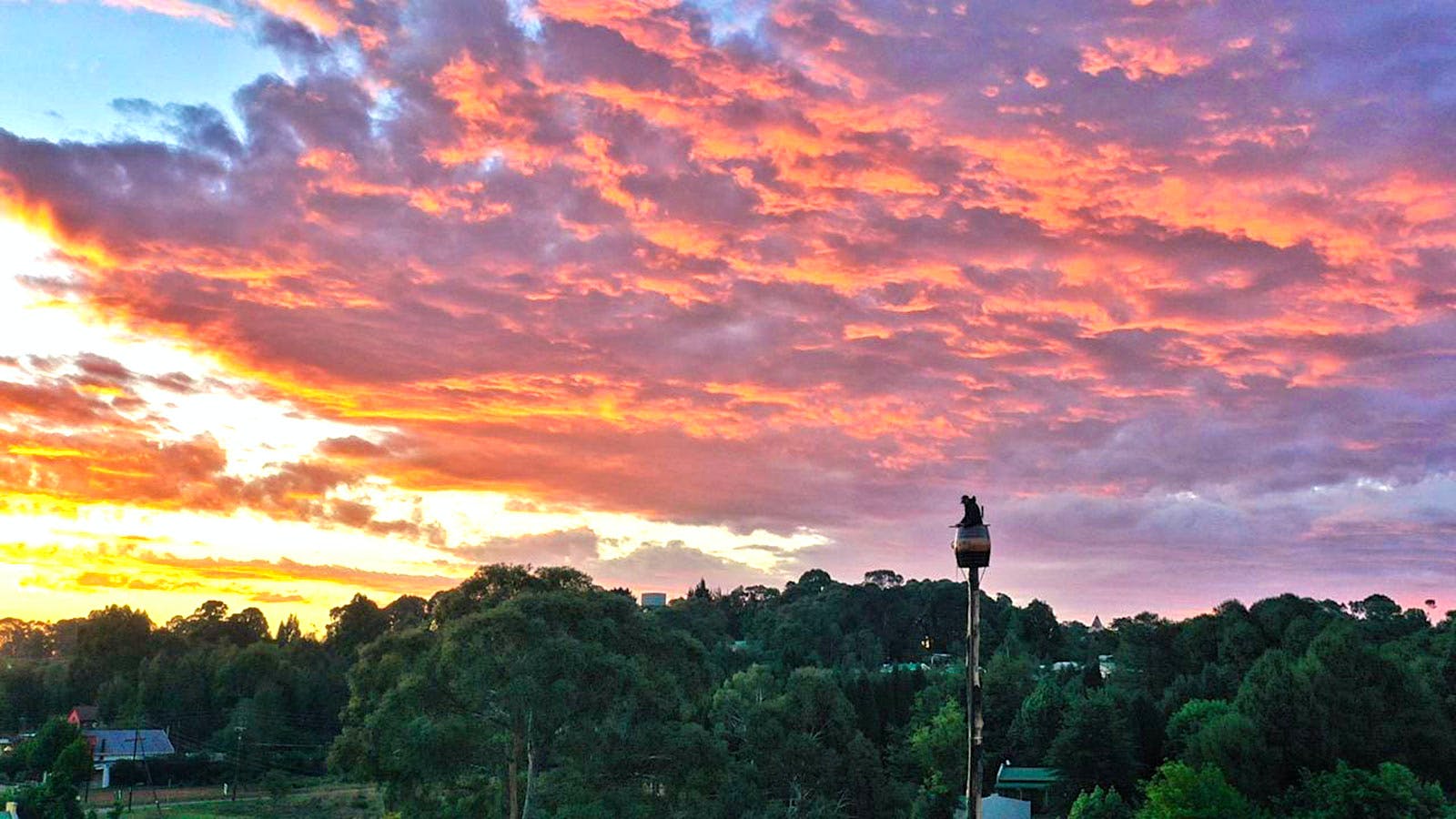 Dullstroom, South Africa's highest resident observes a sunset. (Courtesy of Up the Pole in Dullstroom)

Kruger has ruled out another, future turn in the barrel, but his thirst for excellence in odd adventures is undiminished, and he's already thinking ahead to other non-barrel records in need of breaking. "Maybe something different,” he mused. “But not the same thing again.”—C.D.

Coronavirus Lands in Bordeaux via Wine Pro, While Burgundy Braces for Tourism Drought

One man's cough, fever and plane ticket from China led health authorities in Bordeaux to suspect something worse than flu season was afoot: A 48-year-old wine professional was quarantined earlier this month when he became one of the first confirmed cases of coronavirus in France. The virus has become an international concern since it broke out in the city of Wuhan, China, which the unidentified man had traveled through. The death toll has risen to 170, and there are more than 7,700 confirmed cases worldwide.

The man is being treated at the Pellegrin branch of Bordeaux University Hospital. “Unfortunately we are not allowed to share any further information on the patient. I can just confirm he is a wine professional, aged 48,” director of communication for Bordeaux University Hospital Julie Raude told Unfiltered via email. In a press conference, French Minister of Health Agnès Buzyn stressed there's no cause for panic: "He is fine," she said of the patient; health authorities swiftly identified 10 to 15 people he may have contacted since landing in Bordeaux, and all are monitoring for symptoms.

Burgundy is feeling its own concerning side effects of the virus: The tourism industry fears a wave of travel cancellations and a decrease in business as its reliable influx of Chinese tourists could wane. Last year, hoteliers in the city of Dijon logged 80,000 overnight stays from Chinese tourists. “It’s true that Burgundy and Dijon receive a lot of Chinese tourists,” a senior press officer for Bourgogne-Franche-Comte, a local tourism center, told Unfiltered via email. “We are the third destination in France for Chinese tourists after Paris and Provence Côte-d’Azur.” For now, all seems under control, and business continues as usual despite the coronavirus threat—for wine, anyway, if not for a certain beer brand with an unlucky moniker.—S.Z.