"Wine is not a product, it's a feeling," explained Guillermo de Aranzabal of Spain's La Rioja Alta. "You drink a glass of wine for a few seconds, but you remember it for years, maybe a lifetime."

De Aranzabal was introducing one of his wines, La Rioja Alta Rioja 890 Gran Reserva Selección Especial 2005, which earned No. 4 on Wine Spectator's 2018 Top 100 list, to a sold-out crowd at the 2019 New York Wine Experience. Undoubtedly he was experiencing a feeling of pride.

Throughout the three days of this Wine Experience, the 39th, wine triggered many emotions—joy, passion and a sense of wonder, to name just a few. More than 5,000 people, including consumers, winemakers, winery owners, wine merchants, chefs and sommeliers, came to the New York Marriott Marquis in the heart of Times Square, from Oct. 17 to 19, to find inspiration in wine.

They found it in two evenings of Grand Tastings, 16 seminars, two multicourse lunches paired with the wines of New Zealand and California’s Paso Robles region, and a black-tie Champagne reception and banquet recognizing the world's greatest restaurant wine programs. A total of 355 wines were poured from 26,725 bottles into more than 60,000 glasses.

All those wines made memories that may last a lifetime.

"Are you getting enough wine?" Wine Spectator senior editor Tim Fish asked the crowd on Saturday morning. The cheering response was a resounding yes. Over the previous two nights, attendees had been enjoying the Grand Tastings, where they could sample 273 wines from around the world, all rated 90 points or more by Wine Spectator editors. More than 2,400 people flocked to two ballrooms for the chance. 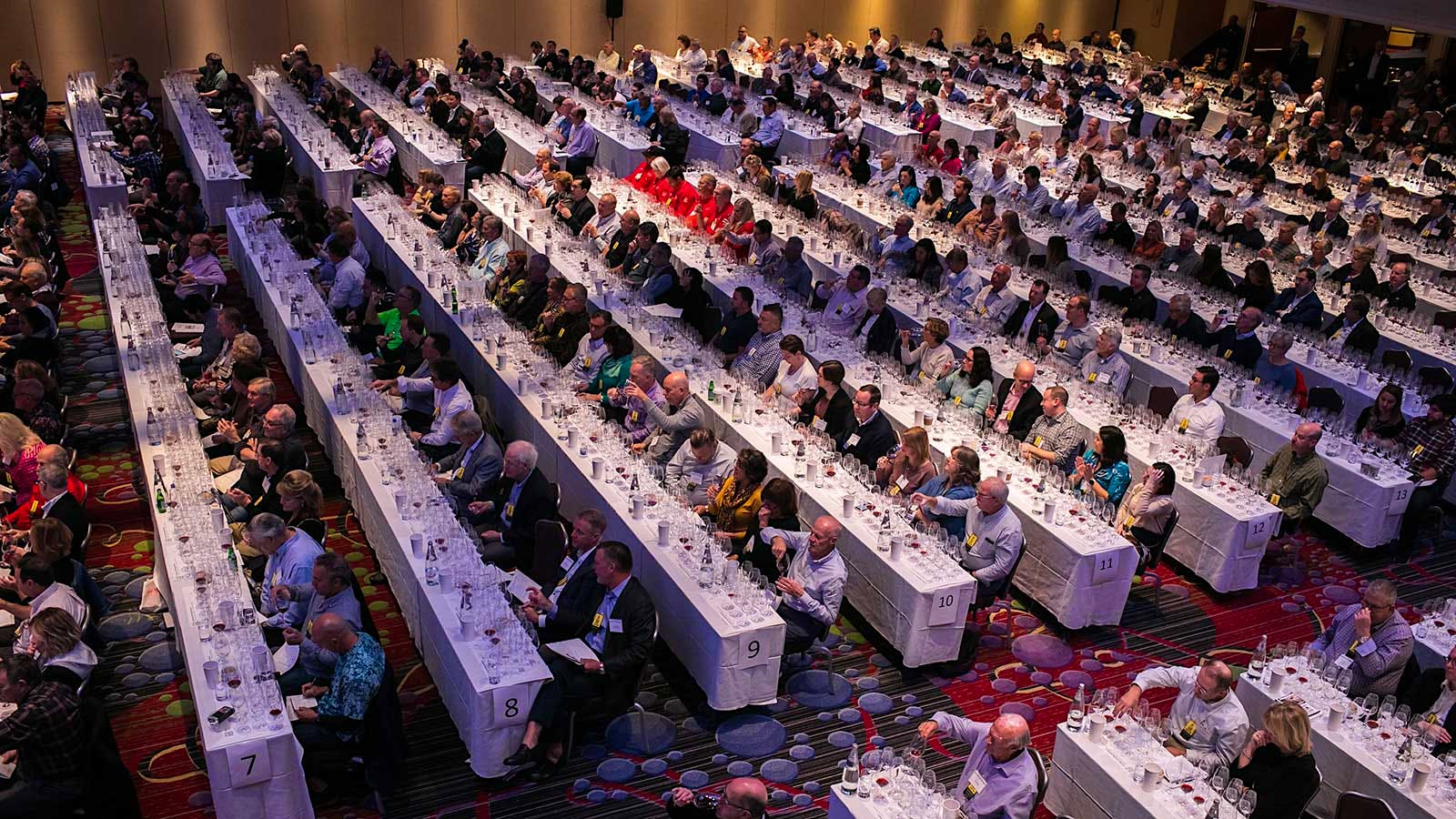 Those looking for excitement could try icons of wine, from top Champagnes to a row of 2009 Bordeauxs to big Napa names. But they could also let their curiosity run wild, exploring what New Zealand can do with Pinot Noir, sampling a Garnatxa Blanca from Spain's Tarragona, a Silvaner from Germany, a Carignan from Israel or a Bordeaux blend from Japan.

And they could meet the people behind the wines, who were thrilled at the chance to shake hands with passionate consumers and share their joy. Hugh Davies of Schramsberg brought a late-disgorged 2000 vintage of his sparkling wine because he wanted people to taste a California bubbly with age. The team at Marchesi di Barolo brought their 1989 Cannubi. "The people here are so kind to us," said Valentina Abbona, whose family owns the winery. "We wanted to bring them something special."

Friday and Saturday's seminars offered a chance to share the emotions that go into making the wines. For a panel of winemakers serving up Burgundy, it was the deep affection for their special terroirs. For four Chilean vintners, it was amazement at the incredible uniqueness of Chile's land and a strong desire to share how much the region has accomplished in recent decades. For the team at Sojourn Cellars, who shared their winning entry to Wine Spectator's 2019 Video Contest, it was a chance to show the rugged, remote beauty of the Sonoma Coast. 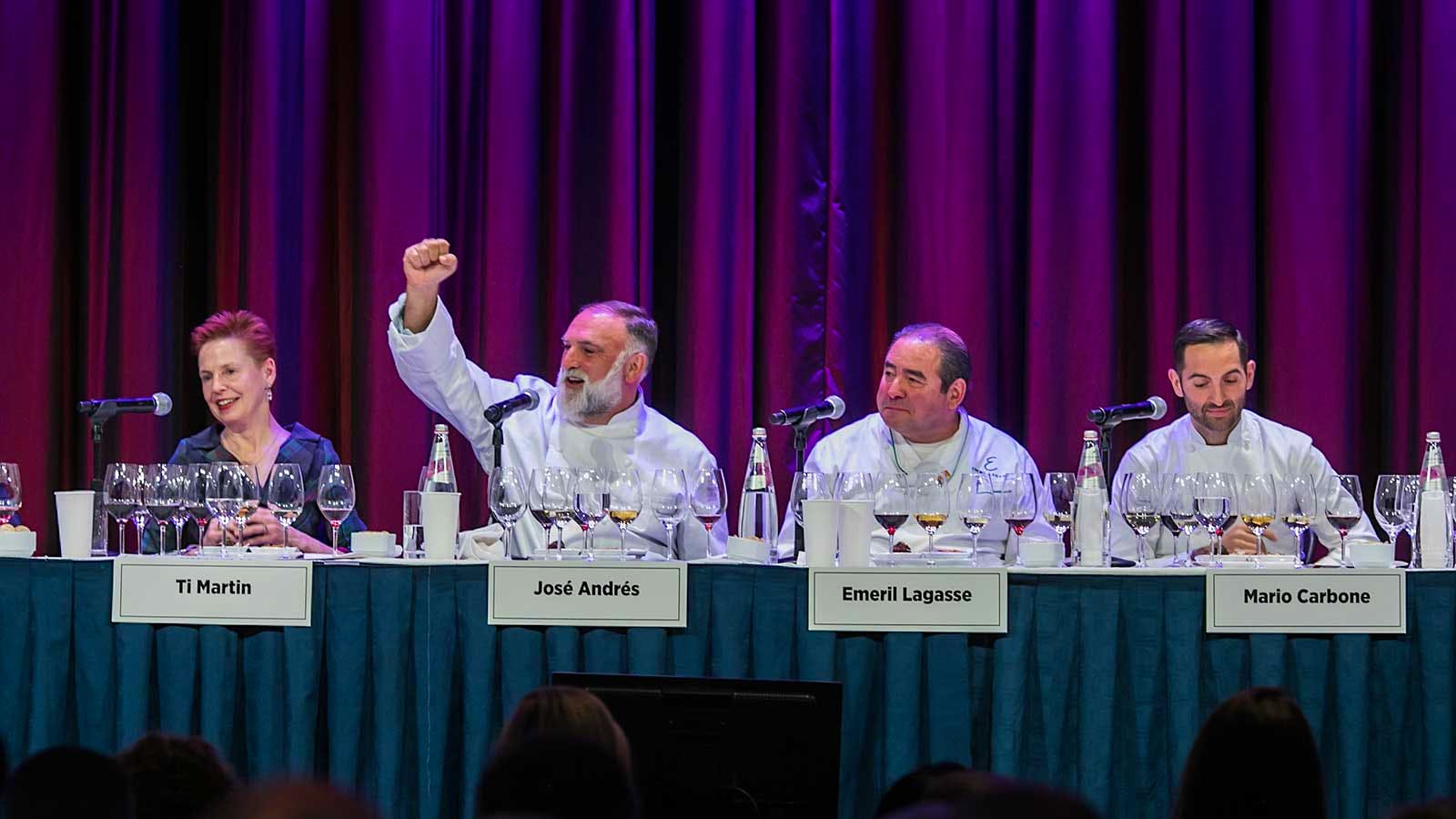 The Chefs' Challenge is a perennial crowd favorite. (Shannon Sturgis)

For a panel from Bolgheri, Italy, it was a moment to proudly claim their place as one of the world's great wine regions, as they presented four blockbuster Tuscan reds. To crown the moment, their neighbor Priscilla Incisa della Rocchetta of Tenuta San Guido took the stage to accept Wine Spectator's 2018 Wine of the Year award for her family's Bolgheri-Sassicaia Sassicaia 2015.

For four California vintners, a panel on Napa mountain Cabernets was a chance to explain their love for the challenging land above the Napa Valley floor. Phil Ross spoke of his late mother Boots Brounstein and stepfather Al Brounstein's decades-long romance with their unique spot at Diamond Creek.

For Tim and Carissa Mondavi, wine can show the special love of family. They shared their Cabernet from Continuum on Napa's Pritchard Hill and how it's a continuation of their family's four-generation love affair with wine. Marc Perrin shared four vintages of Château de Beaucastel's Châteauneuf-du-Pape, including the 1989 vintage, Wine Spectator's 1991 Wine of the Year, and explained how his family collaborates and shares feelings of joy and responsibility at the thought of planning for the next generation. "When I plant a vineyard, I remember it is for my son and my daughter," Perrin noted.

Wine can transmit ambition too. Christian Moueix told the audience of how he furthered his family's great wine business in Bordeaux but pursued his own dream of building a winery in Napa at Dominus Estate. Celebrating 50 years in wine, he thanked the audience for all their support. "It has been the adventure of my life, and I could not have done it without you." 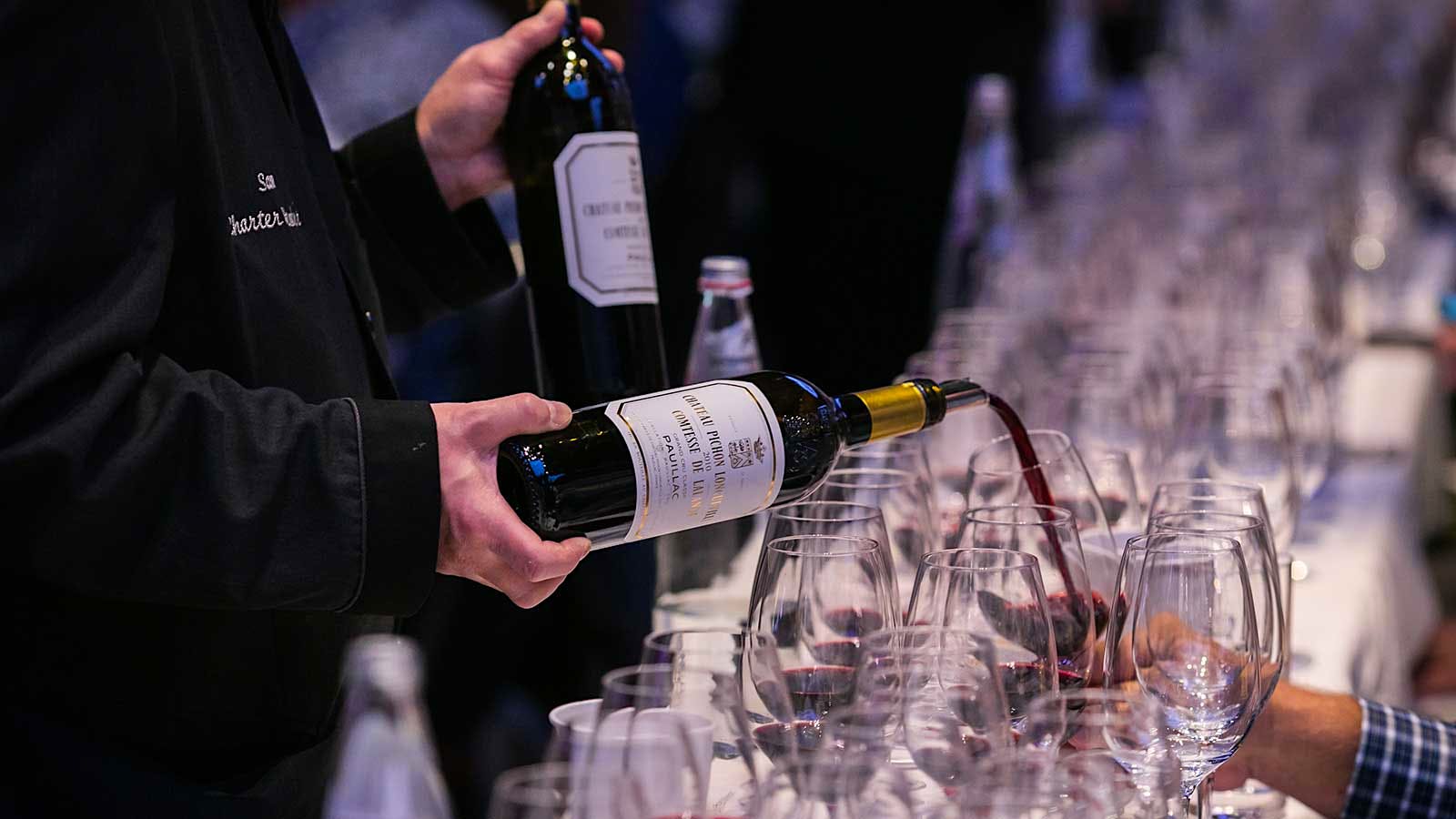 A showstopping six-vintage vertical tasting of Pichon Lalande, going back to 1982, was served at the 2019 Wine Experience. (Shannon Sturgis)

Frédéric Rouzaud explained why his family's growing wine company didn't think twice when the opportunity to expand to Bordeaux and purchase Château Pichon Longueville Lalande arose. How could they pass up the chance to sustain and improve this iconic winery?

While Rouzaud was expressing hope for Pichon's future, the audience was expressing amazement at its past. Rouzaud and general director Nicolas Glumineau had brought six vintages, including the revered 1982.

"Does anyone want to taste another Wine of the Year?" Wine Spectator senior editor James Molesworth had quipped a day earlier. Adrian Bridge filled the audience with a feeling of gratitude when he shared not one, but two past winners: the Taylor Fladgate Vintage Port 1994 and the Fonseca Vintage Port 1994.

Wine can bring feelings of fun and of comfort, and the annual Chefs' Challenge served up both. Restaurateur Ti Martin and chefs José Andrés, Emeril Lagasse and Mario Carbone brought amazing food, fantastic wine pairings and plenty of laughs to the stage.

Italian vintner Oscar Farinetti brought a more poignant feeling to the event, when he served his Giacomo Borgogno & Figli Barolo Riserva 1999 and asked the audience to celebrate humanity's success at overcoming the trials and adversities of the 20th century, and made a wish that we will not fall backward in the 21st.

The final night brought a Champagne reception and a banquet paying tribute to 2019’s eight new Grand Award winners, restaurants that offer the most compelling wine lists, with the highest level of service. Robert Mondavi and Louis M. Martini wineries donated wines for the banquet. 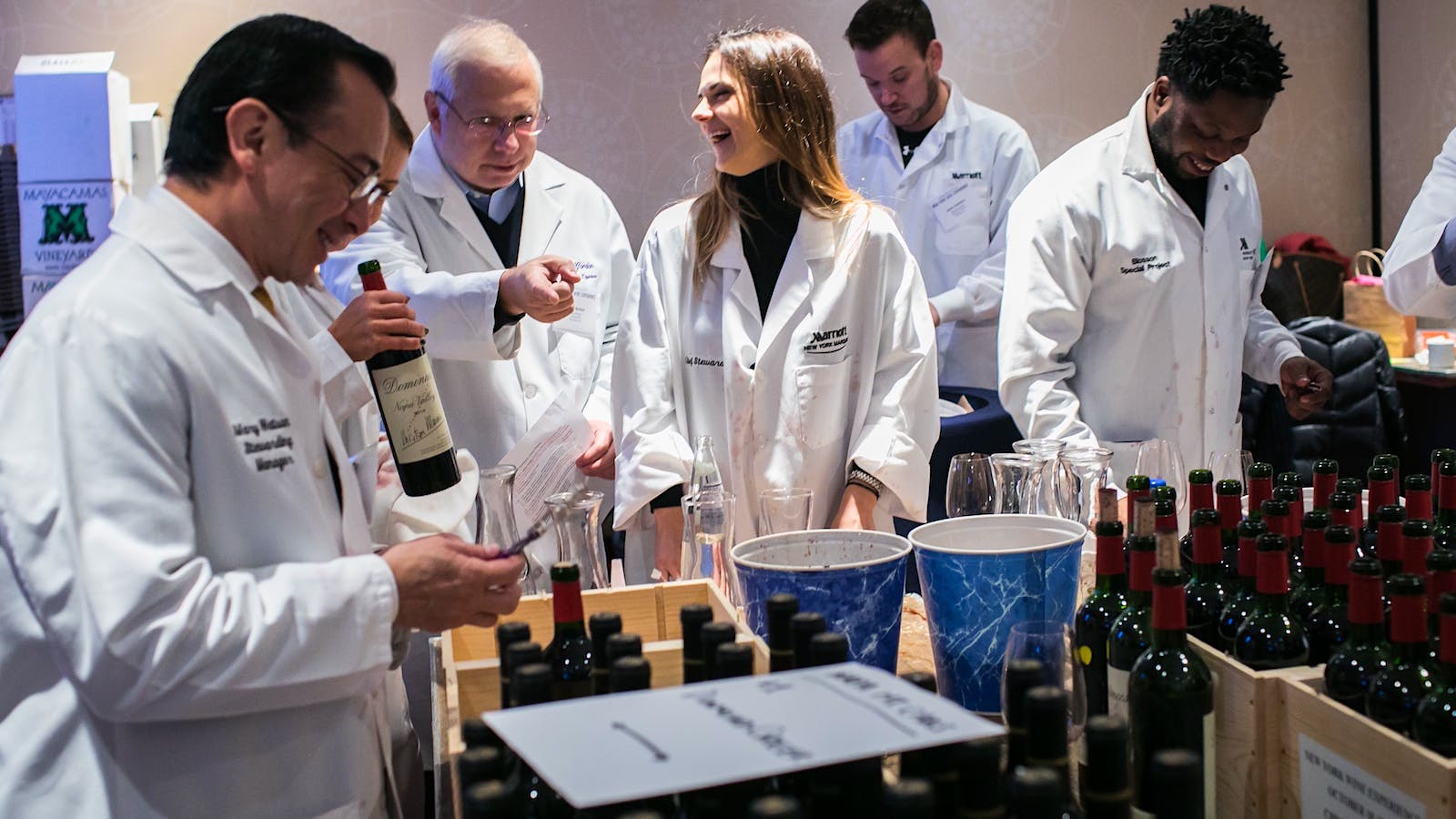 The Wine Experience would not be possible without the incredible generosity of vintners who donate all the passion-inducing wines of the weekend. All net proceeds from the event go to the Wine Spectator Scholarship Foundation, which has raised more than $20 million for scholarships and grants for the hospitality and wine industries, including Washington State University's viticulture and enology program, Sonoma State University's Wine Business Institute, the viticulture and enology program at the University of California at Davis, the Culinary Institute of America, Cornell University's School of Hotel Administration and Florida International University's hospitality school.

To cap the final night, glassmaker Georg Riedel, honored with the 2019 Distinguished Service Award, took the stage to share his feelings of immense pride—not just that, over the past five decades, his glasses have helped allow millions of wines to show their full potential, but also that his two children are surpassing his accomplishments.

A feeling of nostalgia filled the ballroom as the Beach Boys took the stage and guests took to the dance floor. People spoke of the memories of the weekend, many of which will linger for years to come. It's all thanks to the magic that results when wine brings people together.

Next year, the Wine Experience will celebrate its 40th year. The event will be held Oct. 22–24.